We had heard of this walk early in our holiday and so today was an opportunity to do it.  It was very warm today. Frank at the Pension Milka said the weather would improve as the week went on and he was right.  We left the Pension Milka and walked passed Zlatorog into Kranjska Gora town for the bus that would take us to Mojstrana (640m). A 20 minute walk.

We just caught the bus in time, the bus journey took about 15 minutes to reach the stop at Dovje. We then walked down hill into Mojstrana and crossed the bridge onto route 1 on the east side of the Bistrica.

The first few hundred meters after the bridge was along a wide street with large houses, before it then turns into a gravel track. 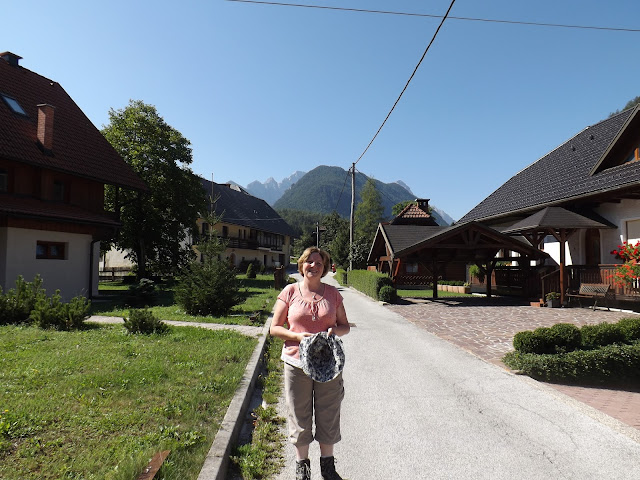 A number of bridges cross the Bistrica but we had planned to stay on the east side and keep off the road away from the cars and the dust they raised travelling up the road.  The path was also quiet, sheltered and a nice walk. 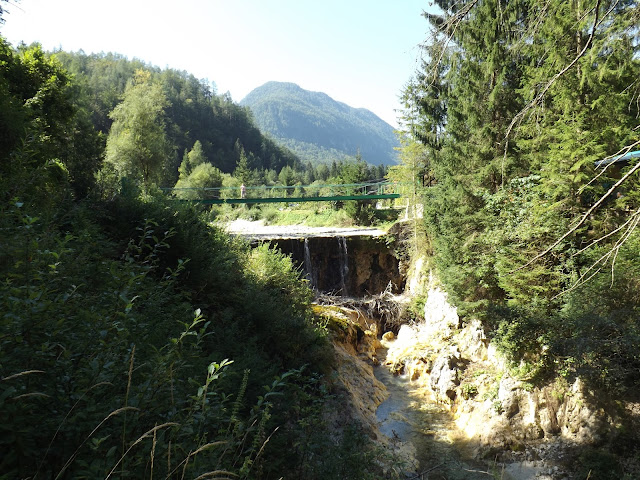 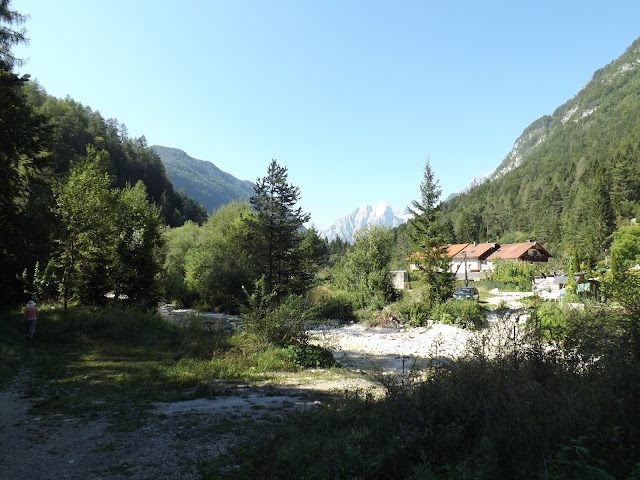 It was a lovely walk by the river with a gentle climb. There are a few information boards, one mentioned bears although we had been told earlier in the week it was very unlikely we would come across any in this area.  Another thing we noticed is that a lot of signs have information in English, apparently this is because Italians, Germans and other visitors to the country are more likely to understand English than Slovenian.  The traffic reports were also in English for the same reason.

Eventually we reach the bridge that we were going to cross and walked the last few hundred meters on the road. From the road we could see Pericnik and after a short rest we walked up the left hand track.  The right hand track was closed and we found later this was due to previous flood damage to the path making it unsafe. 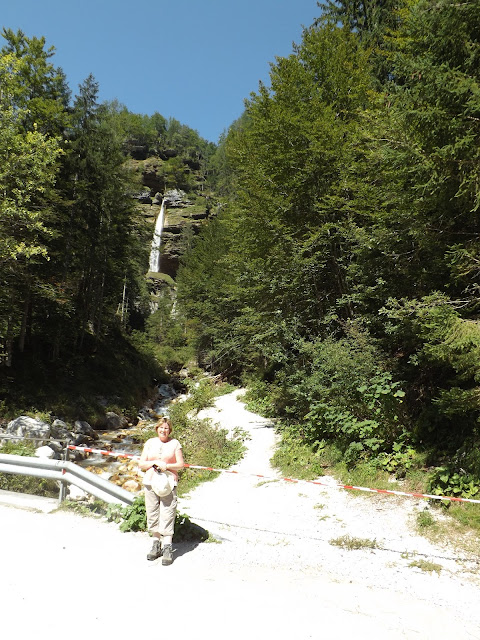 Although a steep climb, it did not take us very long to reach the waterfall, which stands at 52m high. Passing under the waterfall it was cool and felt like walking in the rain as I walked behind the waterfall. 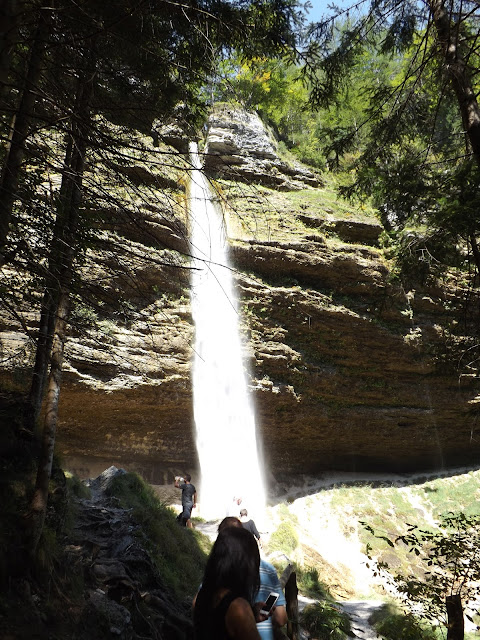 The photos do not show the rainbows made by the falling, bouncing water, which is a shame as the colours were beautiful. 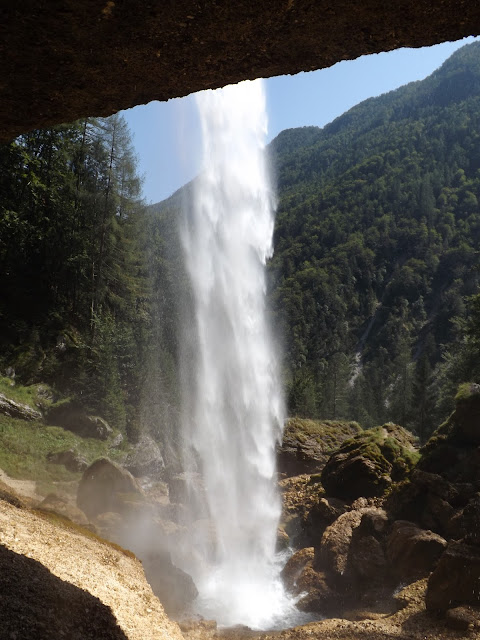 Leaving the waterfall behind us we took a narrow path down hill that crossed the front of the falls, this was steep and slippery. Once passed the waterfall this became an easy forest path to follow that took us back to the road near the Koca Pri Pericniku an Alpine hut. 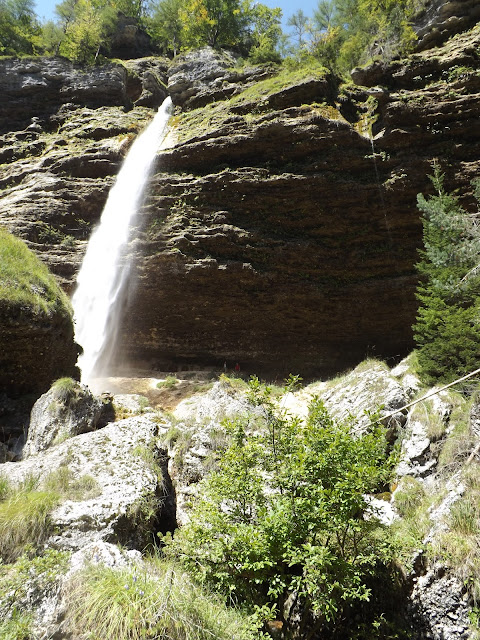 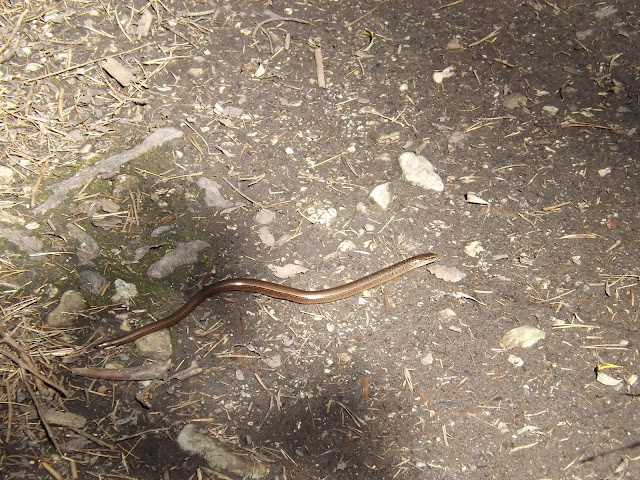 Once in Mojstrana we had a couple of beers at the local pizza stop before we walked back up the hill to the main road and the bus stop.  Near the bus stop is a statue to Jakob Aljaz, who bought the top of Triglav, Slovenia's highest mountain to allow it to stay in Slovenian hands. We had been told that this was the start of the Slovenia national park and as time moved on more area of land of natural beauty has been added. 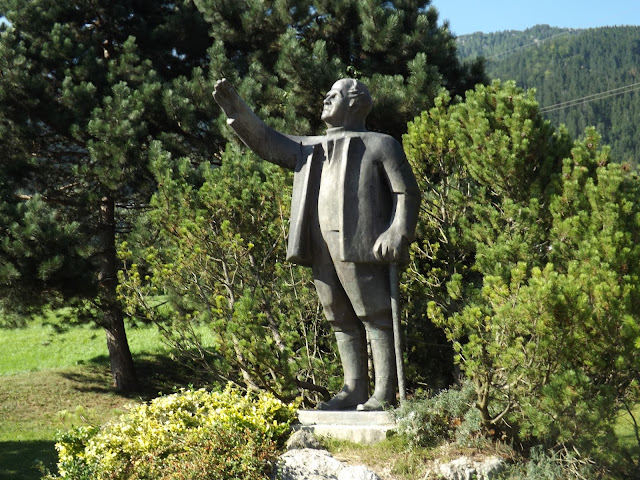 I believe the statue shows Jakob pointing up the valley to Triglav.  It was said that to walk up Triglav you would need guides with ropes and safety equipment and it would take longer than a days walking. 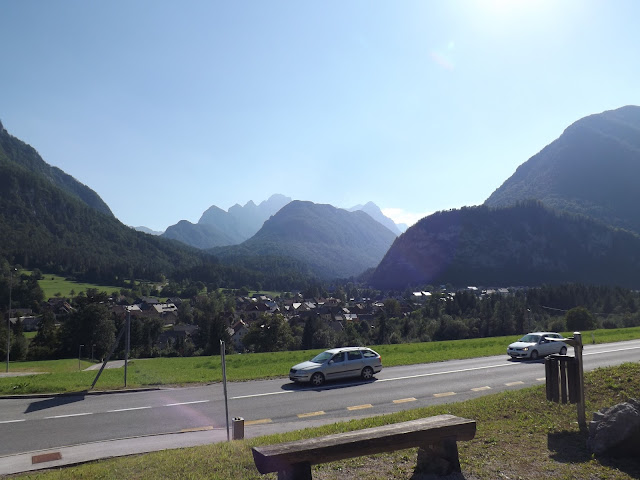 When we returned to Kranjska Gora we walked back through the town and up to Jasna and the Pension Milka, enjoying another evening meal on the veranda, with stunning views and great food. All in all we had covered 12km with approx 360m climb.