As I drove into Ingram Valley I had to stop to let a flock of peacocks cross the road.  I passed Busby Woods and parked the car a little further up the valley at a picnic spot.  The ground was sodden, but that was to be expected with all the rain, it was not going to stop me.  I changed into my boots, checked my watch and set off. 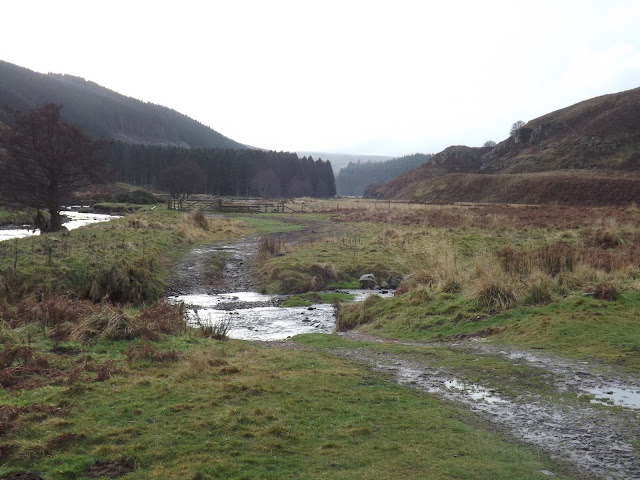 As I moved around the road, west, to where the track I was going to take started I could see the mist on the tops.  I had walked this route many times in the past.  Dead ferns covered the fence but there were places were other people had crossed.  Over the fence I headed north.  The path followed the stream that was full and flowing fast, still it was easy to cross as it twisted and turned.  The ground was sodden and there was puddles in places where the water has ran over the banks.  Going up here had always been tiring, after crossing another fence and following the stream a little further the path goes to a little gate after a little climb. 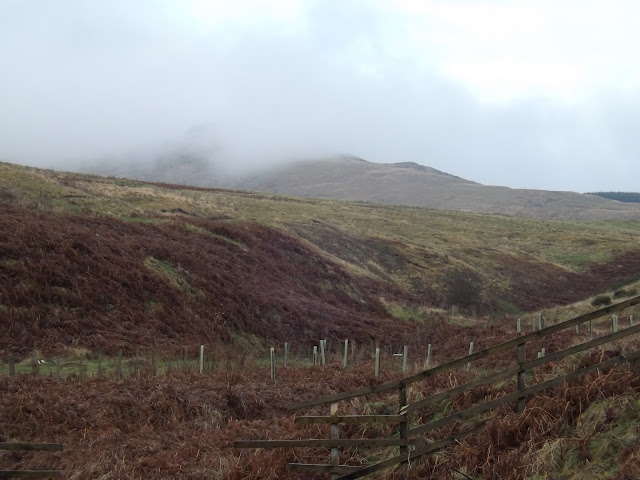 As I walked up Canyan Crags I could see the mist to the west.  The route I was taking followed the fence so navigation would be easy.  A lot of work had recently been done to the fence and it was being replaced in many places.  I thought what a fantastic place to work, the people working on the fence, in the wet and windy conditions might not agree but I thought it was a stunning place to work.

From Cunyan Crags I headed north west to Dunmoor Hill 569m.  We used to call this Eagle Hill because a few years ago when we walked this hill Anne was the first to spot an eagle flying from the hill.  We are convinced it was an eagle, it may have been something else such as a buzzard but as no-one else was there to say any different we are still calling it Eagle Hill.  The lying snow was not as deep as it had been on my previous walk.

From Dunmoor Hill, where the visibility was very poor, I moved north to the edge of Threestoneburn Wood. I walked north west then west along the fence line, as I said the visibility was very poor but every now and then it would lift a little to show the trees.  In places with the snow and wet ground it was also very slippery in places.  At the corner of the wood I crossed the fence.  The ground was always wet along here and today it was no different.  The style was broken and the fence was down so it was easy to cross. 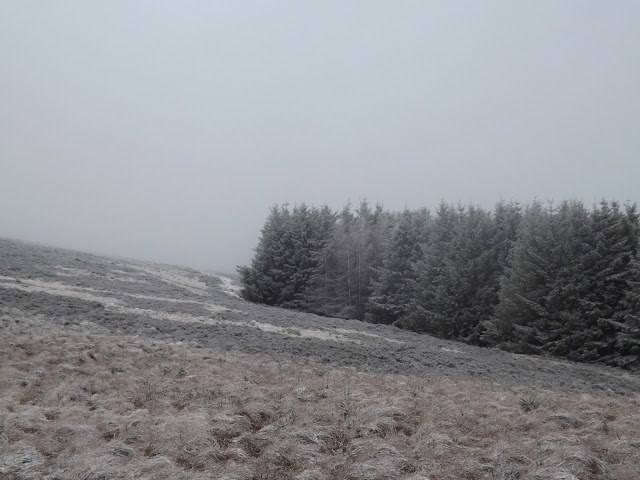 At the top of the wood the track joins a footpath up Hedgehope Hill.  It was just along here I stopped to have a quick snack.  The snow was falling horizontal as hail as I had my snack, no visibility, it felt quite strange. 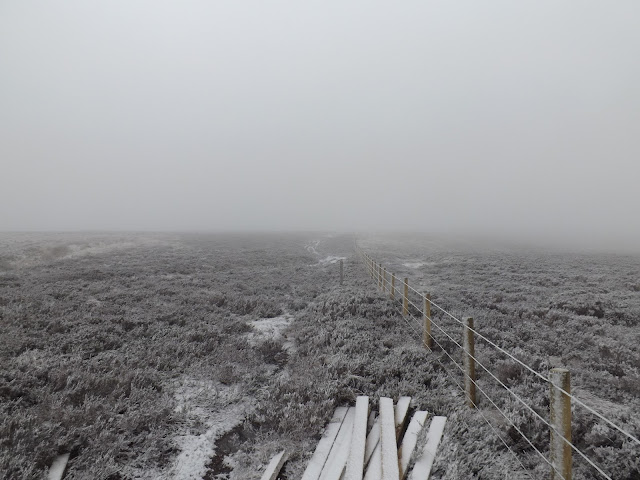 I only had a short stop then moved up Hedgehope Hill 714m.  We had nick named Hedgehope Hill, Smacky Bottom Hill, after an incident with one of the children a number of years ago.

Walking up was quite hard with the wind and hail.  It is quite steep and slippery in places.  At an opening in a fence I decided to move further west than stay with the fence line.  I knew the fence would take me up through some stones and I thought these would be slippery so rather than risk it I moved west a little and stayed to the grass land.  Near the top where the ground levels off, in the past I have found the ground very wet.  Today the cold was an advantage as it made the ground frozen solid and better to walk on.


After walking round the top it was slippery on the stones, very windy and cold so I headed down hill as soon as I could.  Frost was clinging to the fences and wire, very pretty.  I fastened all the zips and tied my hat down to keep warm, as the hail stones were now direct in my face.  My eyes were stinging and watering by the time I came back down to the opening in the fence, where the weather eased a little.  The hailstones stopped and within a few minutes the mist clouds lifted.

Coming down the views opened up and were fantastic, worth the effort.  I was following the same route back that I had taken up.

I had a really good walk, I reached the car, changed my boots and sat and enjoyed the views down the valley for a few minutes before I had to set off home.  I calculated I had only walked for about 5 hrs and covered approx 13.5 km, with approx 660m climb.  Not as far as I would have liked to walk but in the conditions enough to get a good breath of air.