We left the Pension Milka after a good breakfast, at about our usual time and passed Zlatorog the mythical mountain goat with the golden horns.  It was going to be a very warm day and today I was going to have a walk up Vitranc by myself. I waved Anne off as she walked into town and I took the same path we had previously taken earlier in the week. 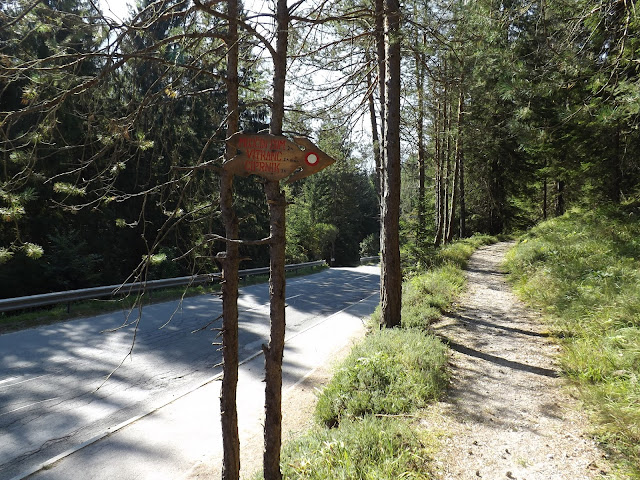 On my way up I kept hearing movement in the grass and under the leaves on either side of my path, at one point I saw a grass snake and at another a small lizard scurrying up the bank.  It did not take me long to climb the steep path over tree roots to reach one of the crags that jutted out over the Mala Pisnica.  Down below I could see the area we had sat earlier in the week when we had a lazy day and sat in the shade reading our books.  Today was not going to be like that. 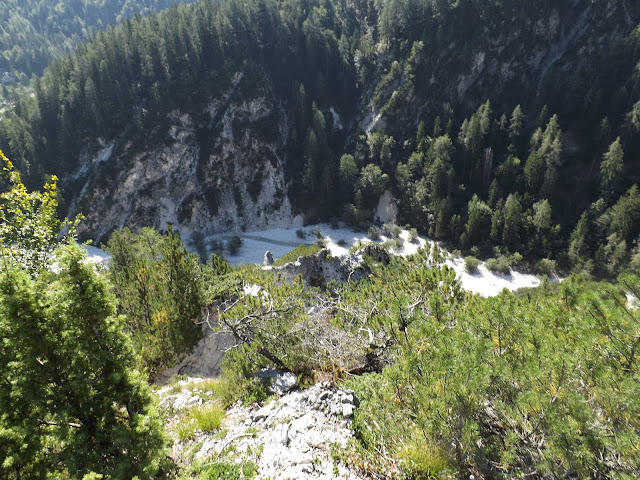 After a further climb up a steep path that twisted and turned I had a brief rest at a short seat set on the north side that over looked the town, Kranjska Gora. 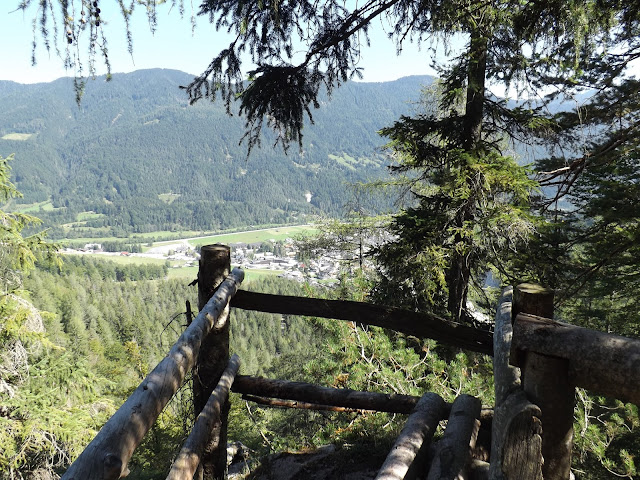 A little further on I was able to take this photo showing the town on the left and the valley where Jasna and Milka was on the right.

Followed by another steep climb I reached the junction where Anne and I turned round the previous walk up Vitranc, a German couple were resting.  Over a short rise I took the path across the scree, which lead to a nice forest trail. 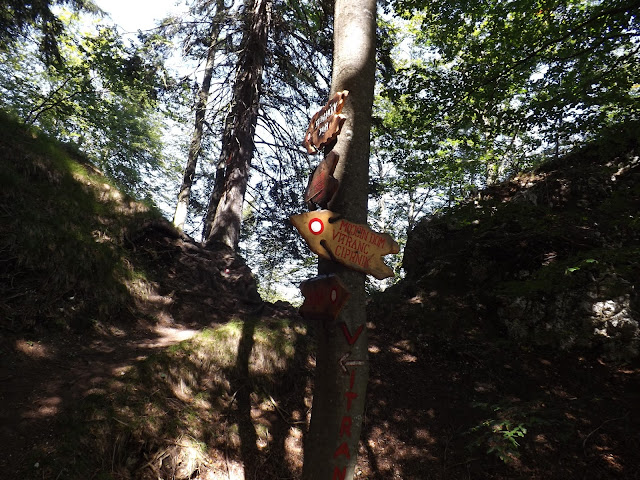 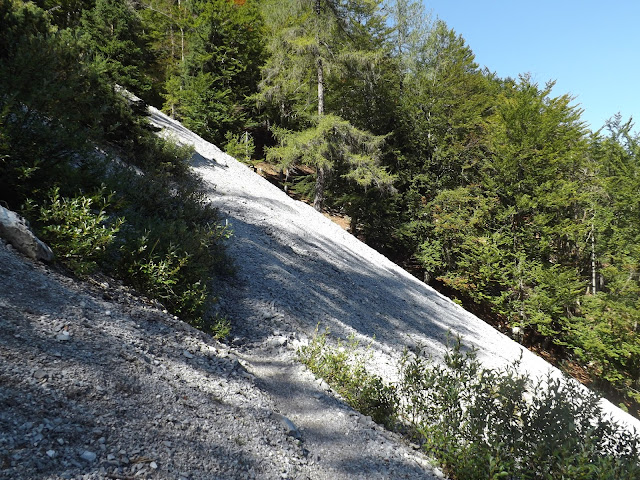 The forest trail on the whole was level but had a number of twists and turns around rocky outcrops before dropping onto a wide forest path that took me to the chair lift station. 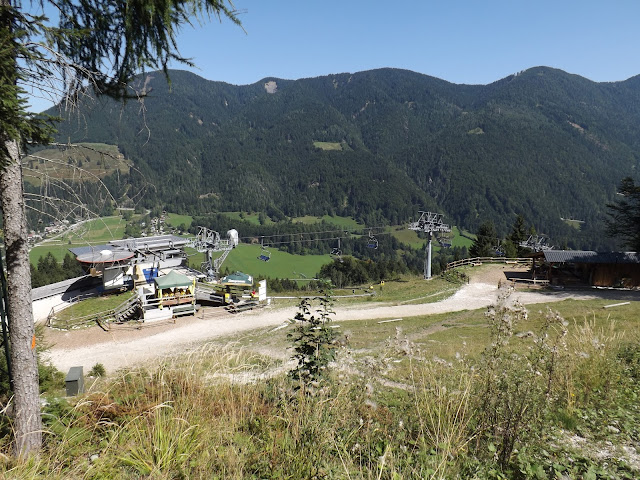 A wide gravel road lead up hill and must be used by skiers took me higher and in places was a very steep climb. This turned into a narrow gravel path on the side of a steep drop near the start of the higher chair lift station.

The path then turned up into the woods and started twisting and turning using tree roots as steps up hill.  The path was almost following a direct route up hill under part of the chair lift.  In places the path was so steep and the gravel slippery, rope had been tied to posts and trees to help walking up hill. 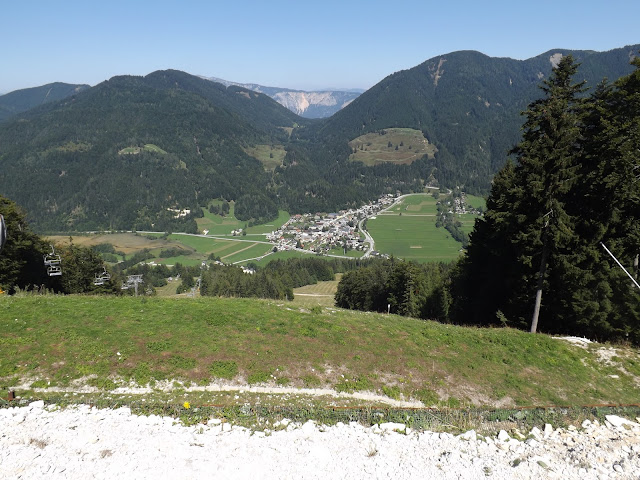 The path came out in an open area at a another Alpine Hut, which was closed. A sign said a view point a 100m further east, but when I got there the views were limited because of the trees. 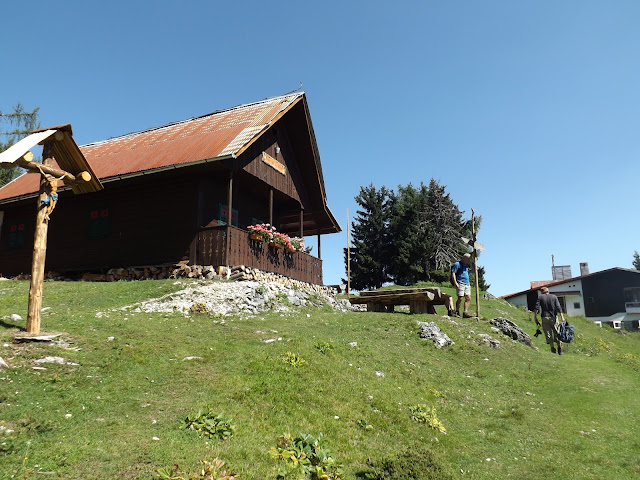 Turning back west there was a further climb up passed the top of the higher chair lift station. I was now on the top of a high wide Alpine ridge, with trees all the way along.  The trees provided shelter to the strong wind that had been blowing in the bottom of the valley. After a small drop and further climb up I reached Vitranc (1636m). 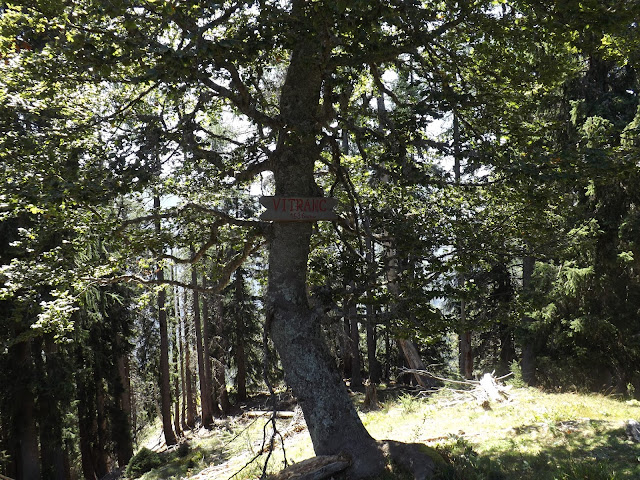 I gave Anne a quick call to let her know where I was and that I was moving up to Ciprinik.  I could see Ciprinik through the trees. 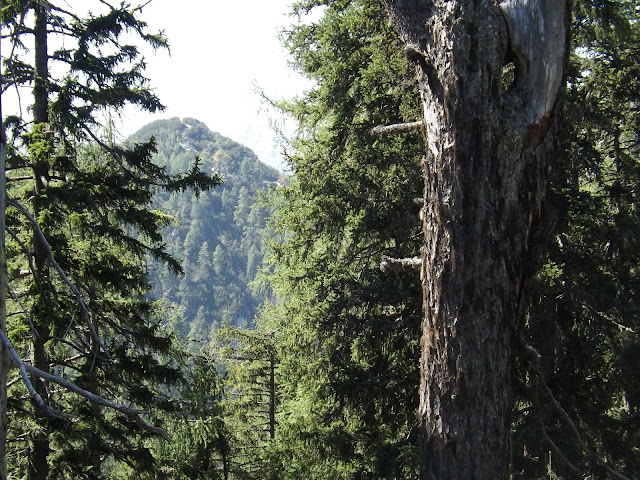 After a short climb down and up, then down again I was soon starting to climb up Ciprinik (1746m).  I was worried about how exposed it would be but it was very calm and clear when I reached the top.  There were a few cables to pull yourself up on and metal rung steps to climb but well worth the effort. Looking north west I could see down onto the ski jumps near Podrun. 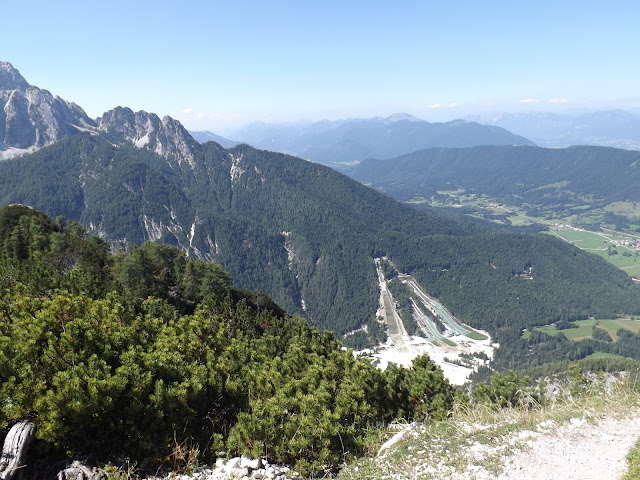 Looking east I could see down the Sava valley. 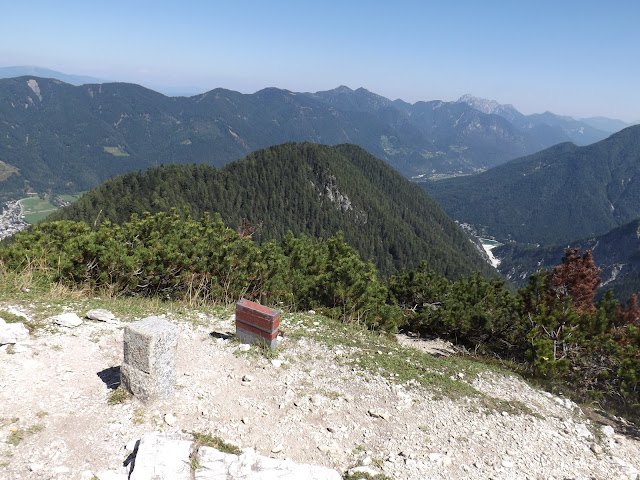 North I could see Pec where the three borders met, Slovinia, Italy and Austria.

After a short rest I started down hill, being steep I took my time.  I passed over the ridges again to Vitranc. 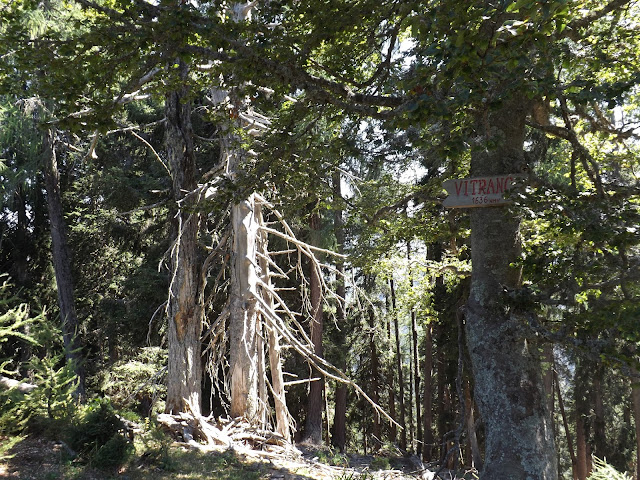 Passed the top of the high chair lift station. 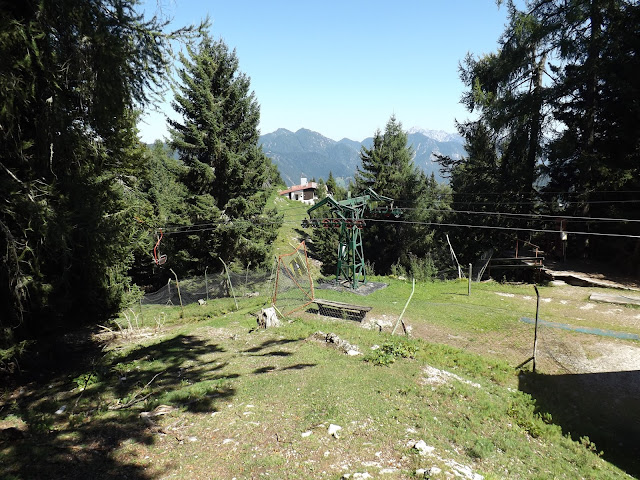 Down the very steep, slippery path using the ropes back to the top of the lower chair lift station.  Where I decided to walk the ski path back into the west side of Kranjska Gora. 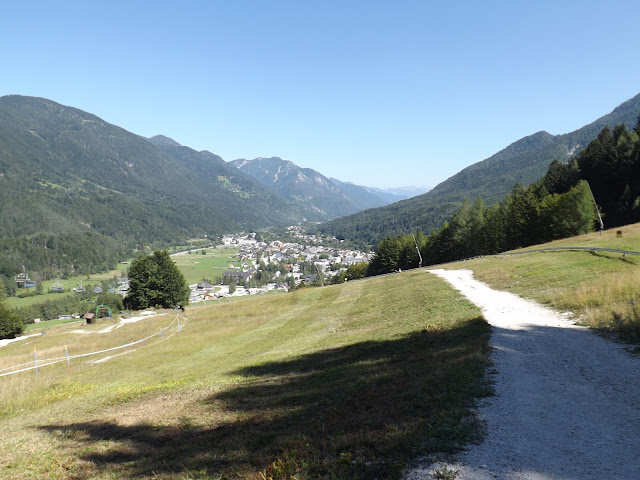 Where I met Anne and we had a piece of home made cake at a well reported cake stop. Followed by a complementary glass of blueberry schnapps.  Then following a couple of what I would call, well deserved beers we walked the 20 minutes back to the goat and the Pension Milka for a well deserved rest before enjoying our evening meal on the veranda. 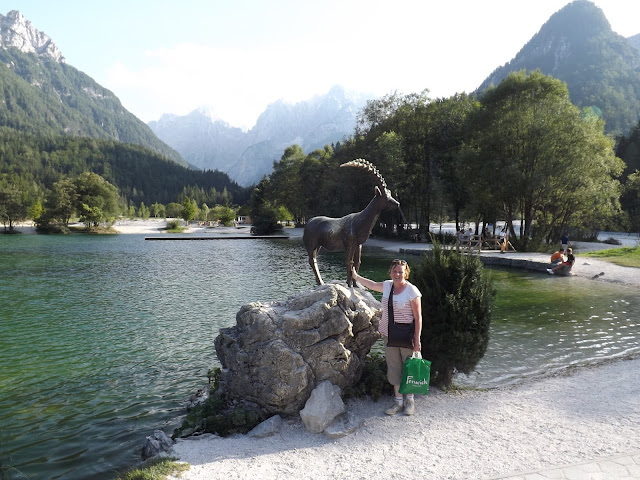