I started at the Druridge Bay Country Park Visitors Centre. I had been here a few weeks ago with our Callum and Declan.  So today as I had the opportunity I thought I would go and have a further explore of the coastal route.  I took the path east out of the car park signed "To the Beach".    On the beach I turned left north and walked along the beach.  I passed a group of what may have been students doing some studying sitting in the dunes. 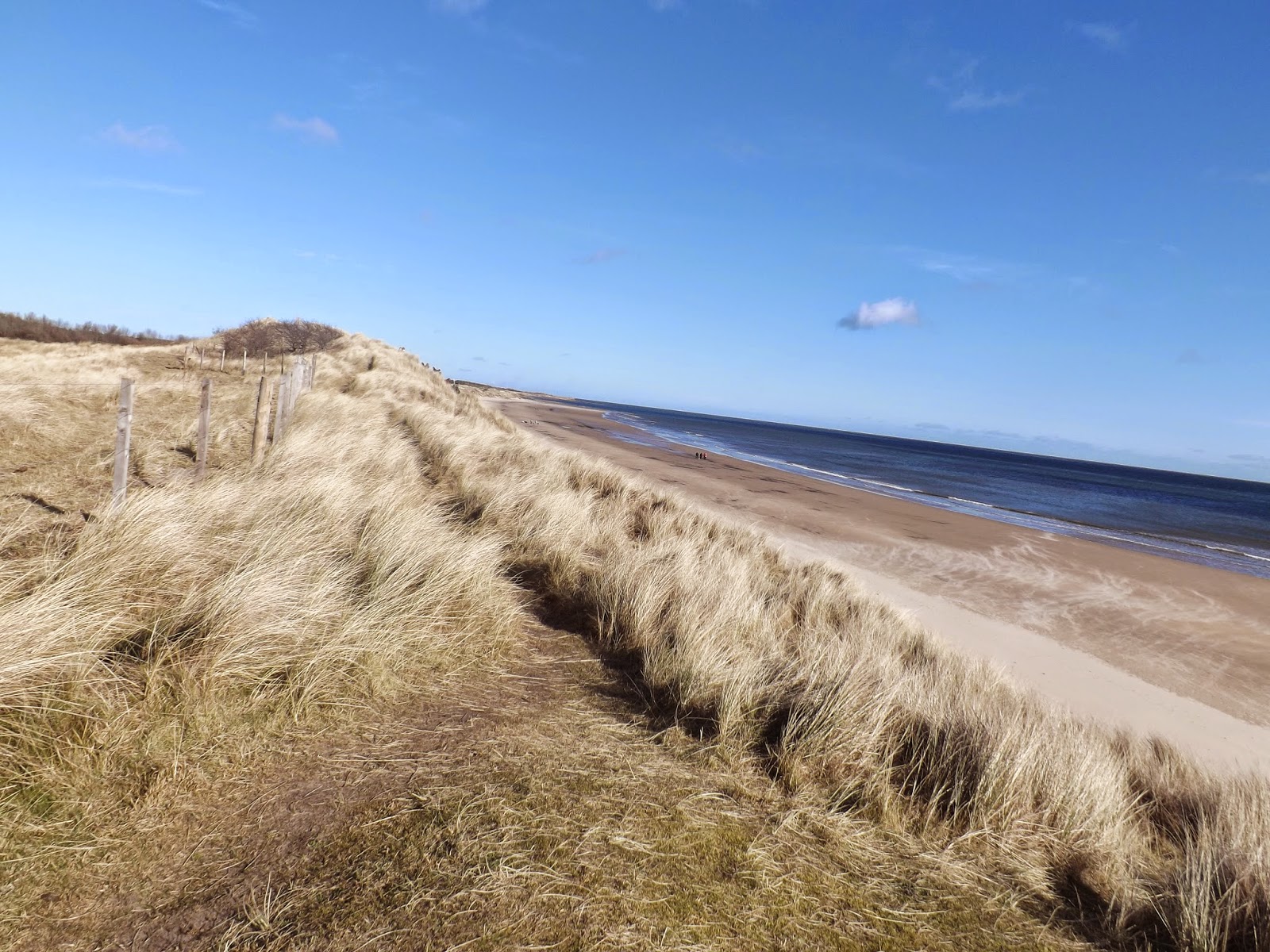 The tide was out, the sand was flat and firm, it was cold and a little bit blowy but a good day to walk. 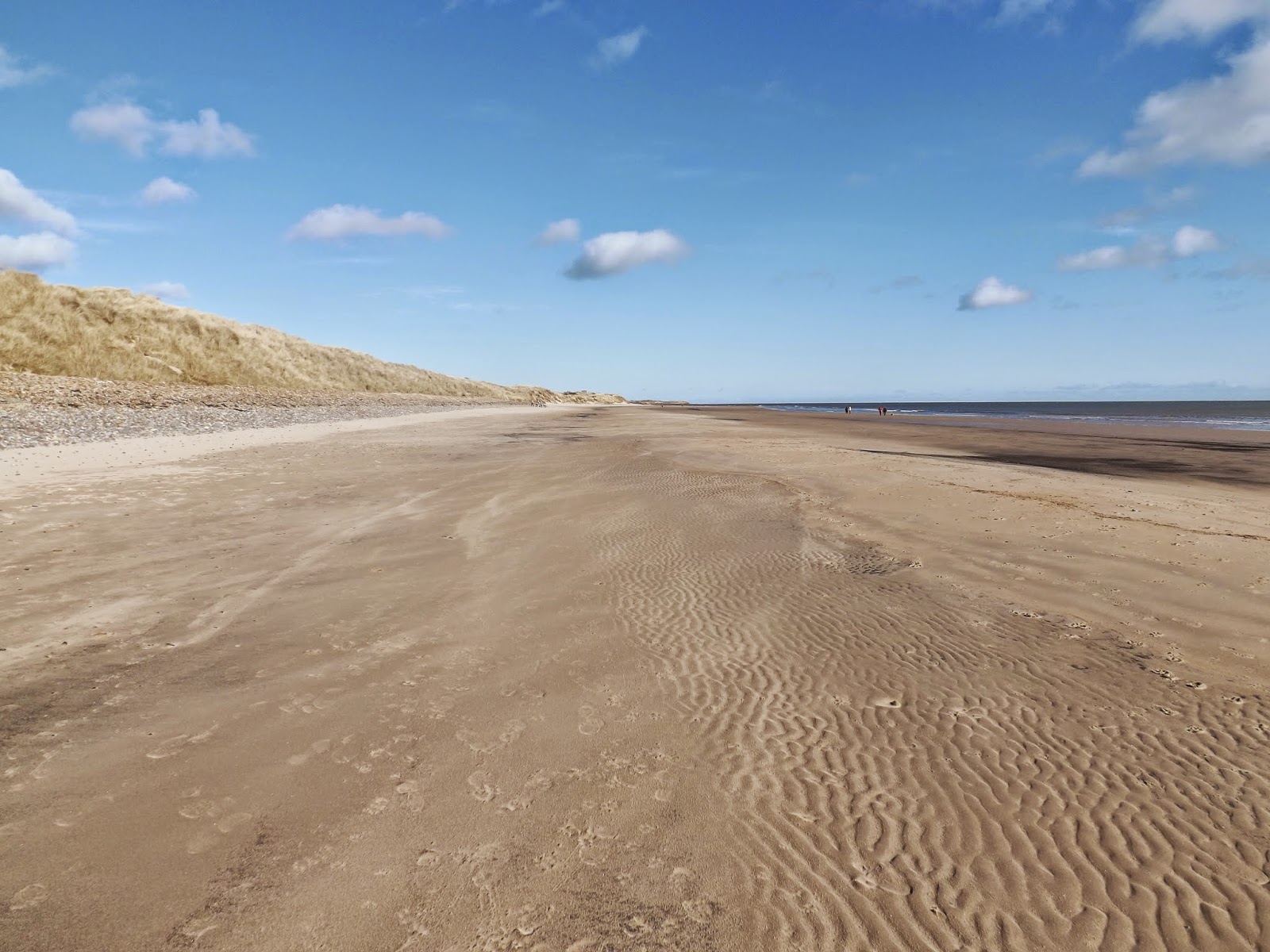 I crossed a stream, which was as far as I had walked with Callum and Declan. Today I was going to walk a little further. I crossed an area of rocks and stones which lead to another wide expanse of sand.  As I moved along I could see Coquet Island. Robson Green had featured this on his program the night before.  He had paddled a canoe over to the island but they would not let him land due to the birds nesting, so he paddled around with a guide then paddled back to Amble.  Just as well he was not out on the canoe today as the sea was very choppy. 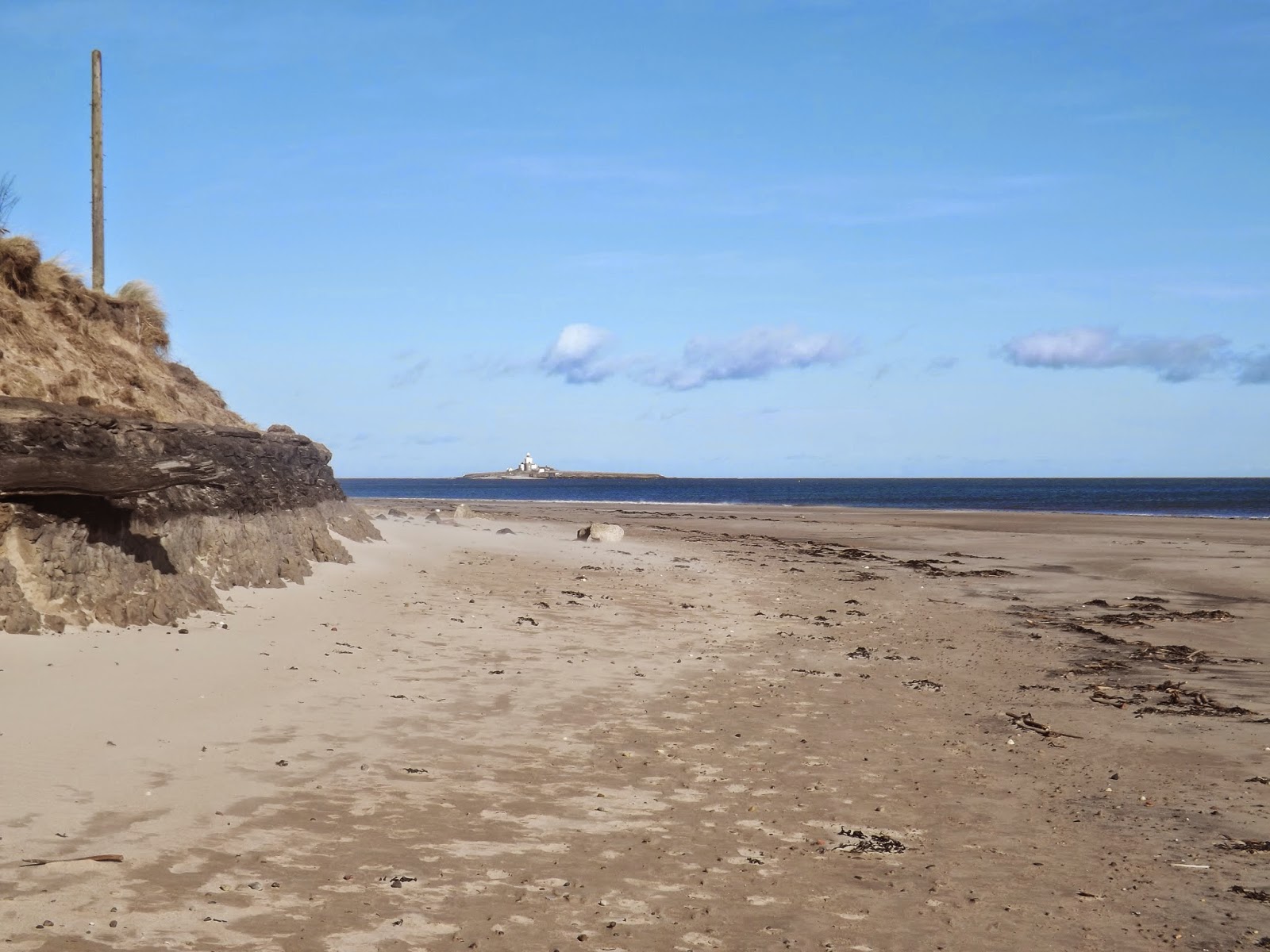 Moving around the coast I came around a bend and I could feel the bite of the cold in the wind. This was also seen in the white crests on the sea. 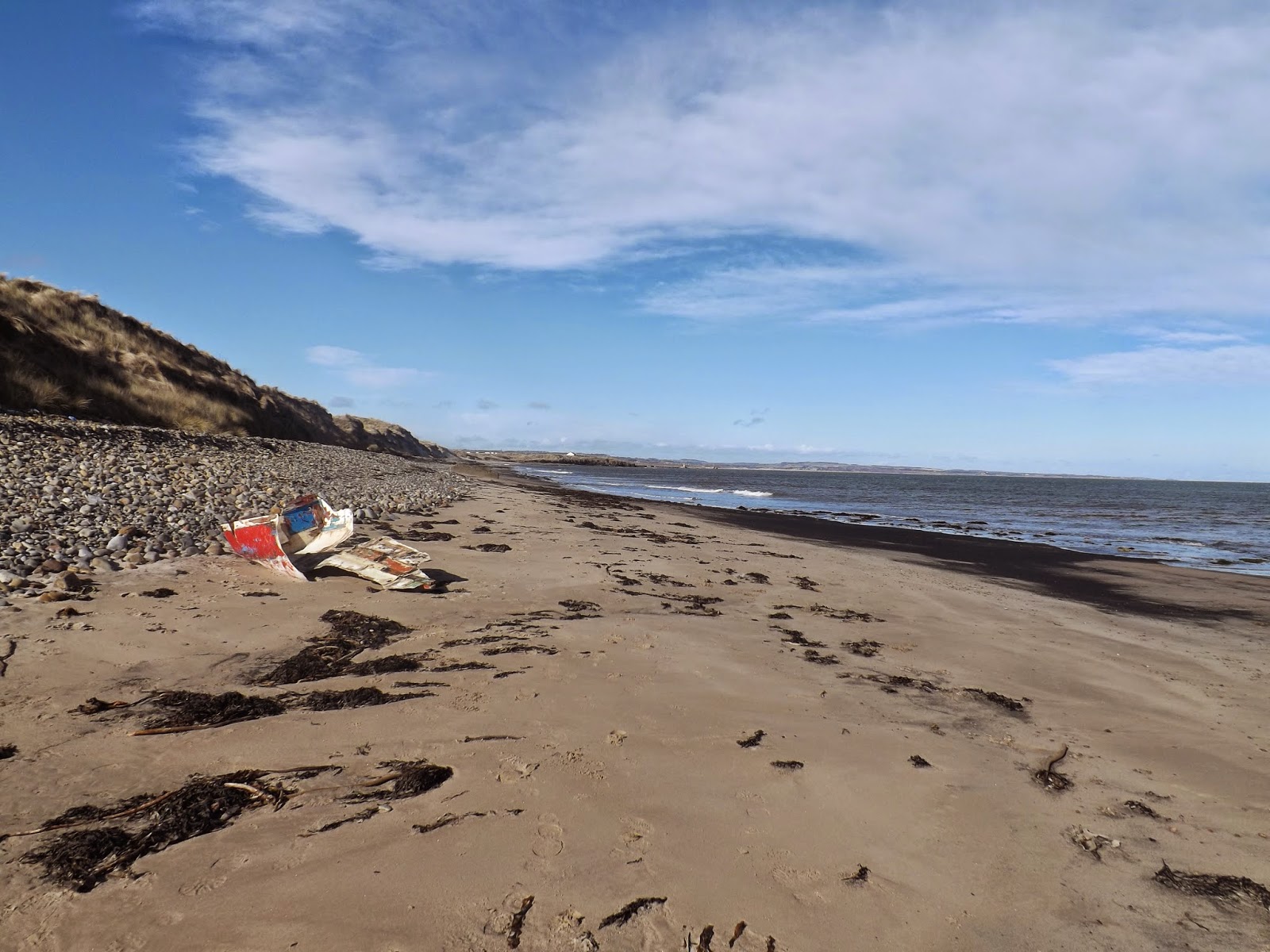 I now found myself in an area where it appeared that the shifting sands had cleared to expose a lot of tree roots that must have been here from trees that grew here years and years ago. 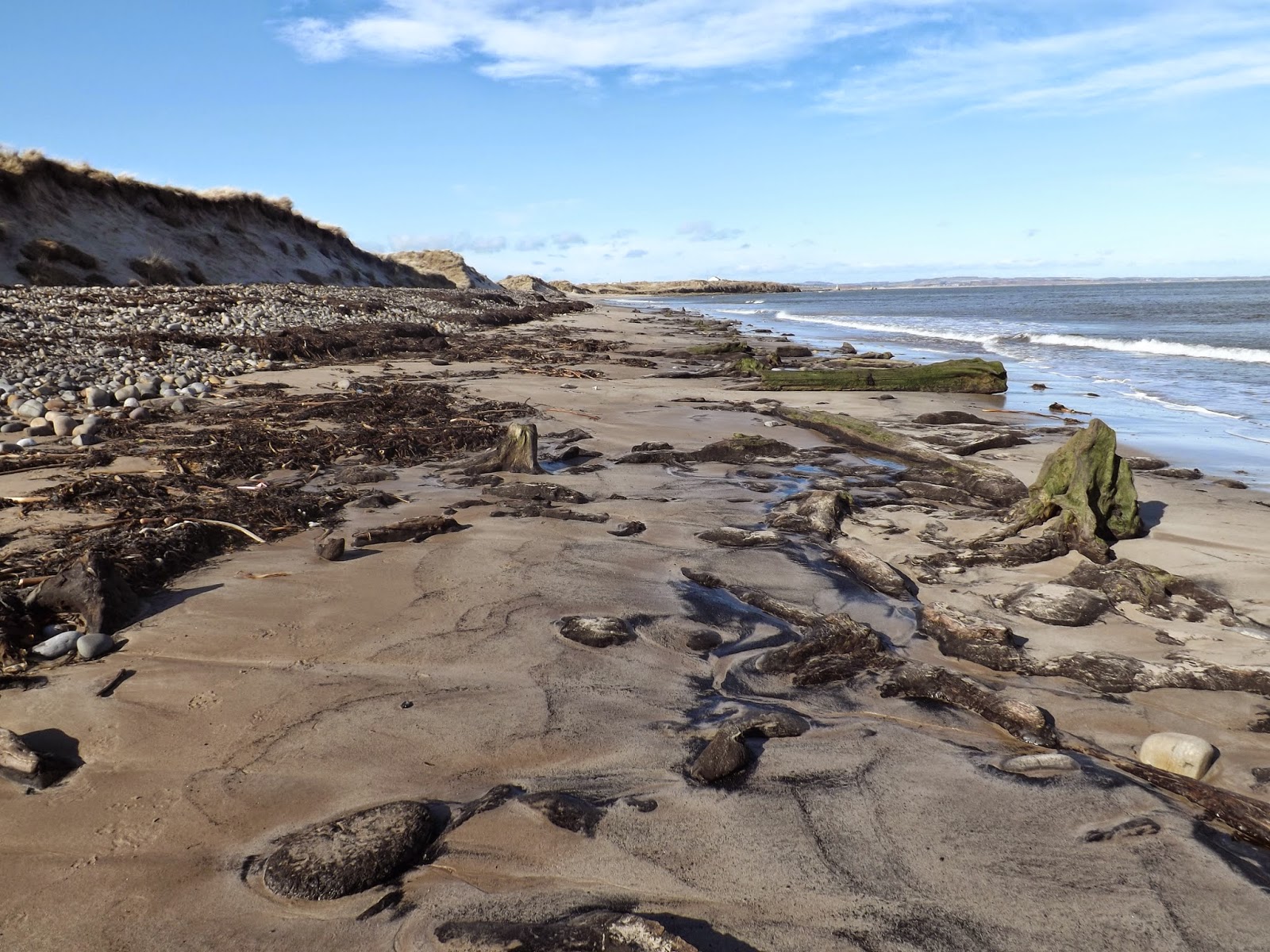 Another stretch of open sand, the wind blew it up and it stung my face and eyes as I approached a track up by the side of the dunes which took me to a place overseeing Coquet Island.  A few meters on and I was overlooking Amble. 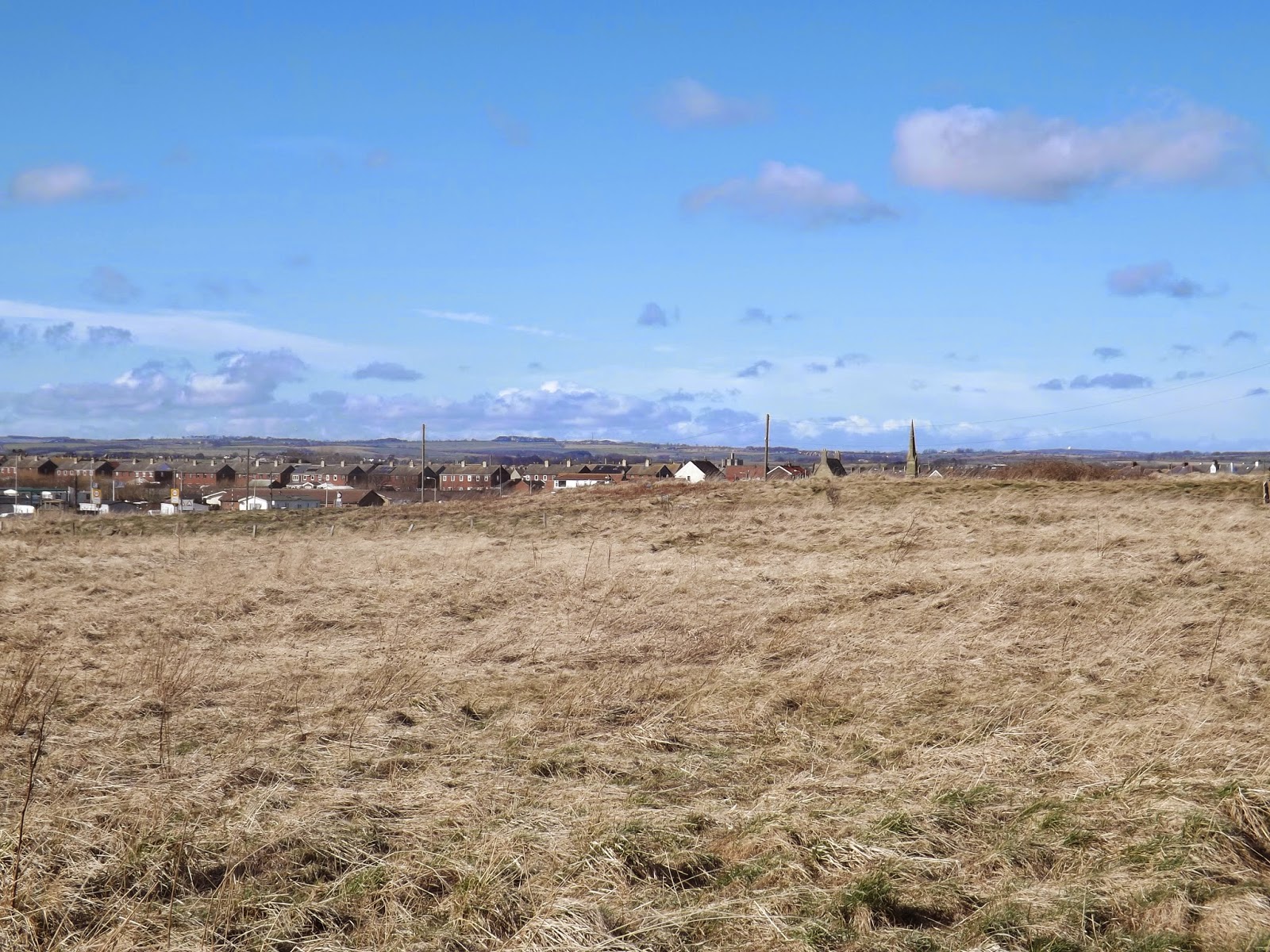 The views up the coast were clear. I followed a path up and down a few dunes to the edge of a play area. 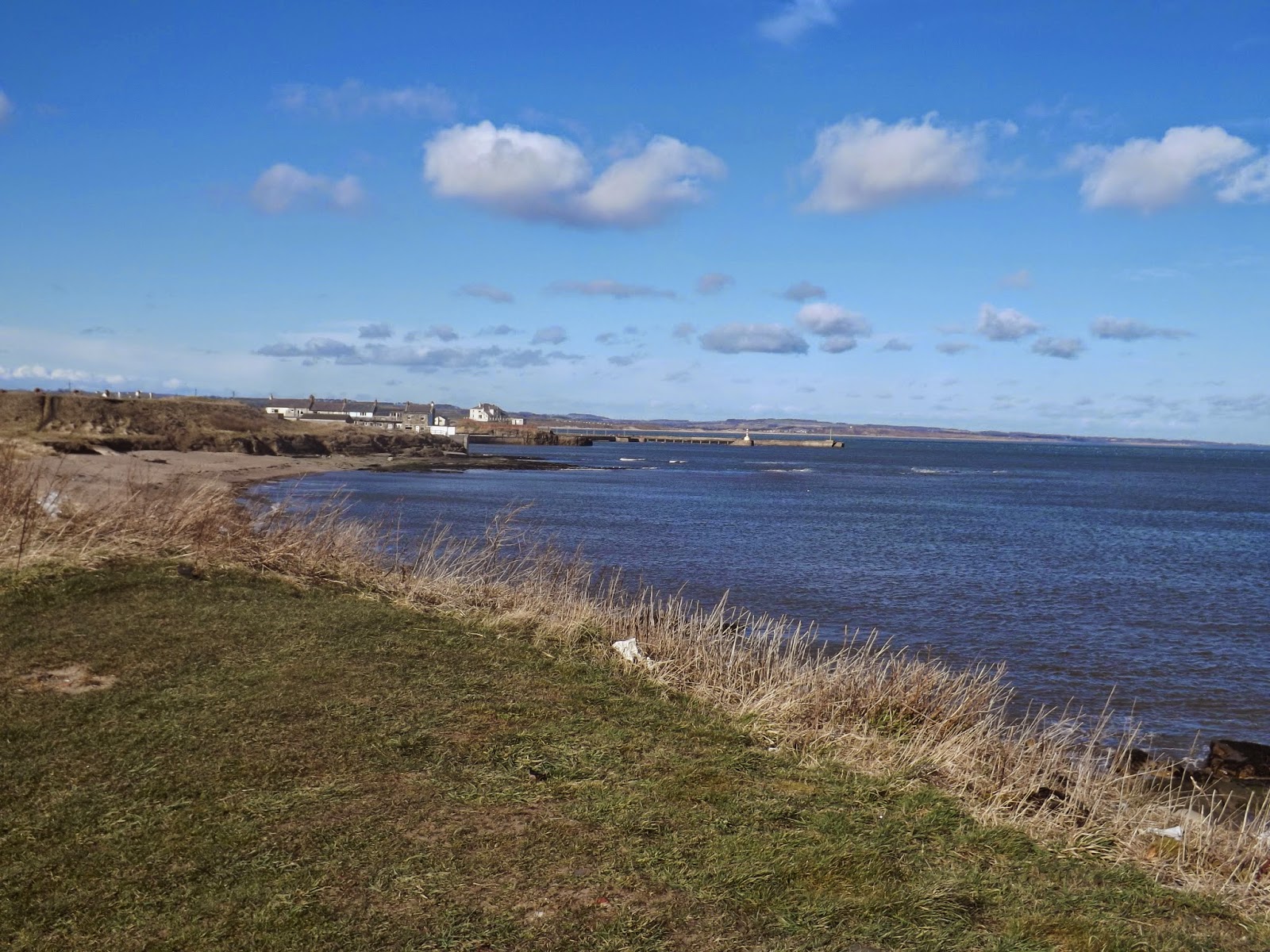 I followed a few signs of the coastal route which took me beside the cemetery, by a few houses and I was at a jetty.  It was very windy walking along the jetties. 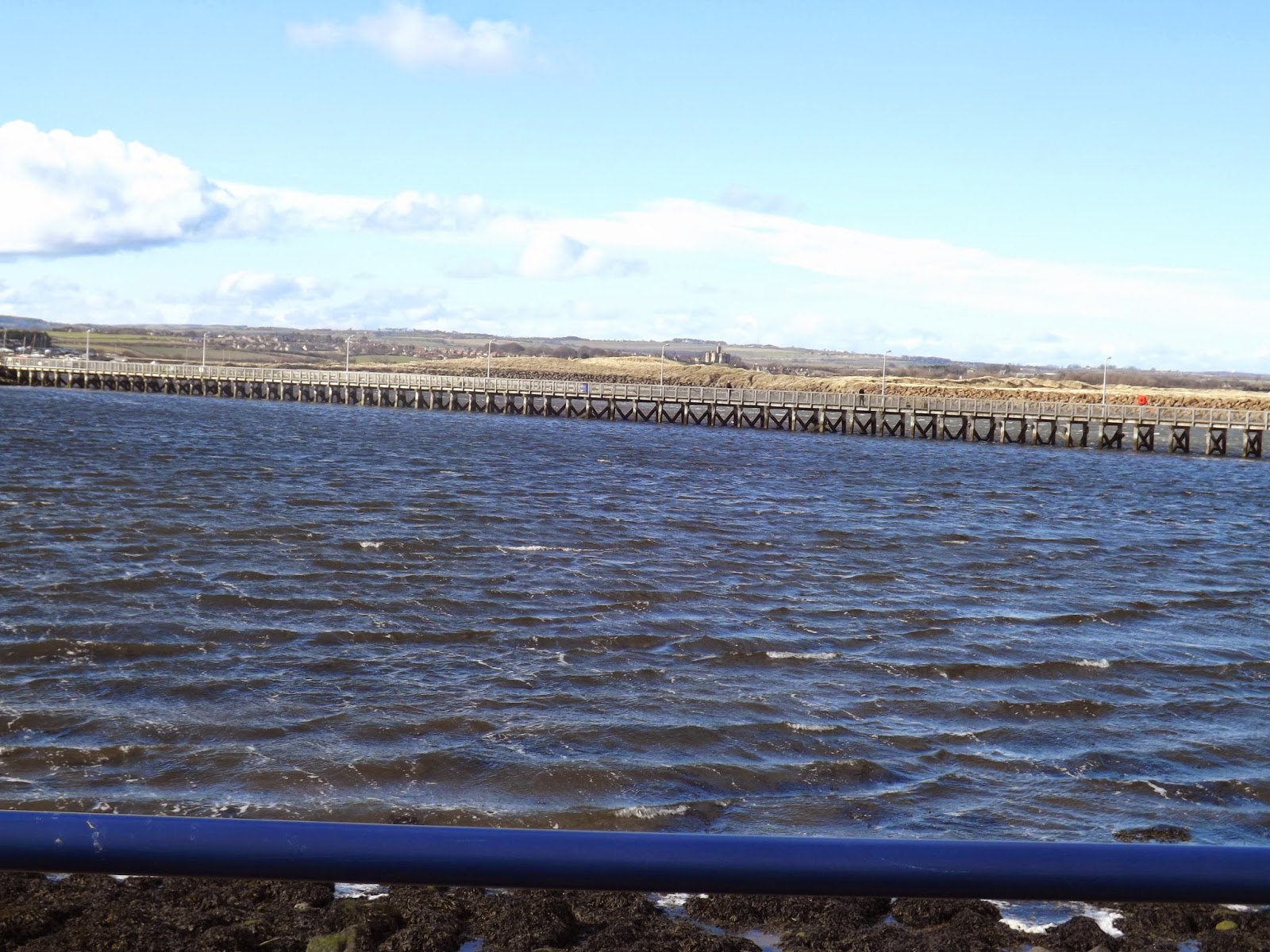 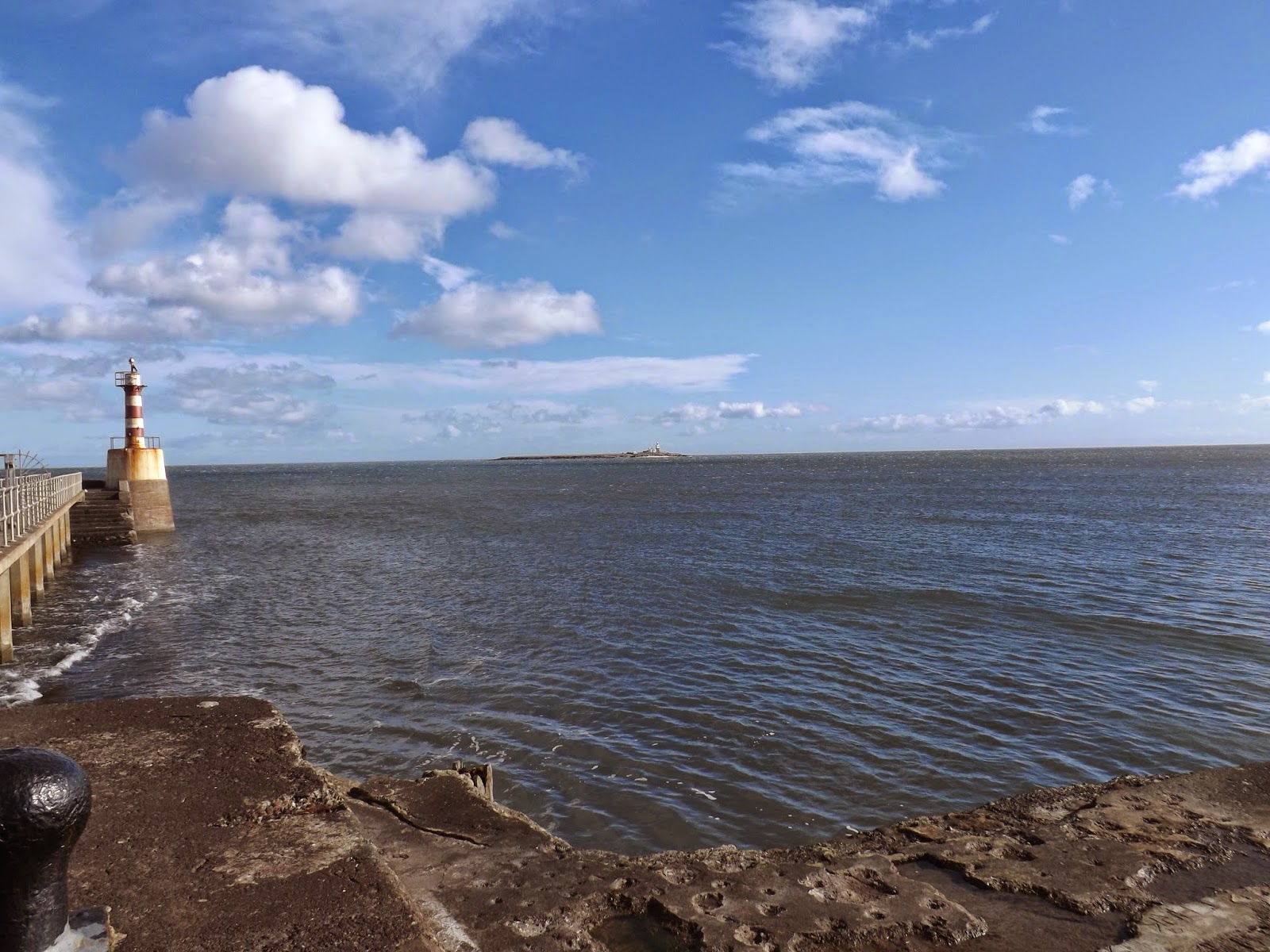 Walking from the jetty, I continued along the quay into Amble, I then took a path between some houses and crossed an area of grass which took me to a boat yard. 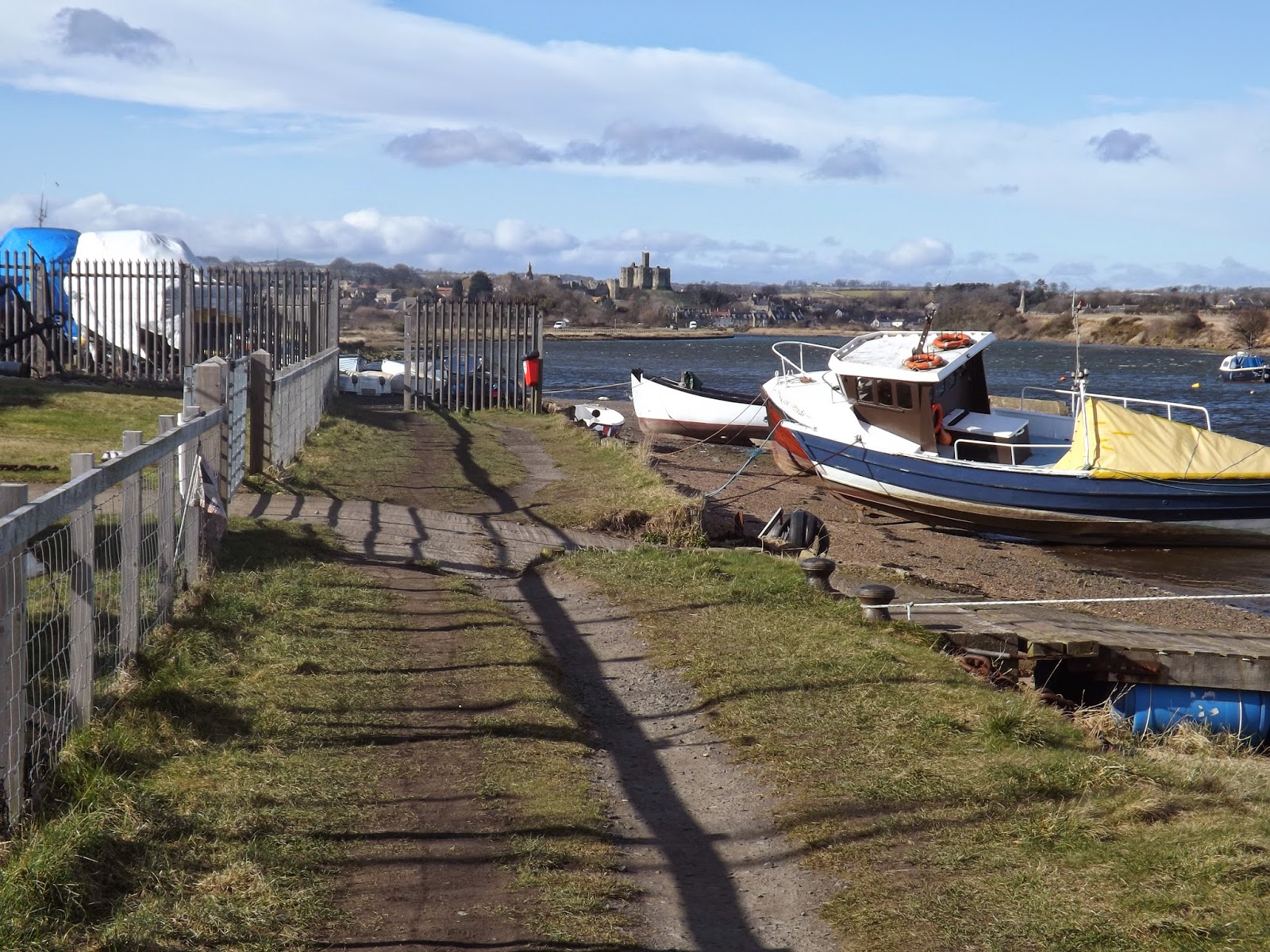 I walked the road by the Amble yacht club, across the car park and onto the main road, the A1068, towards Warkworth. 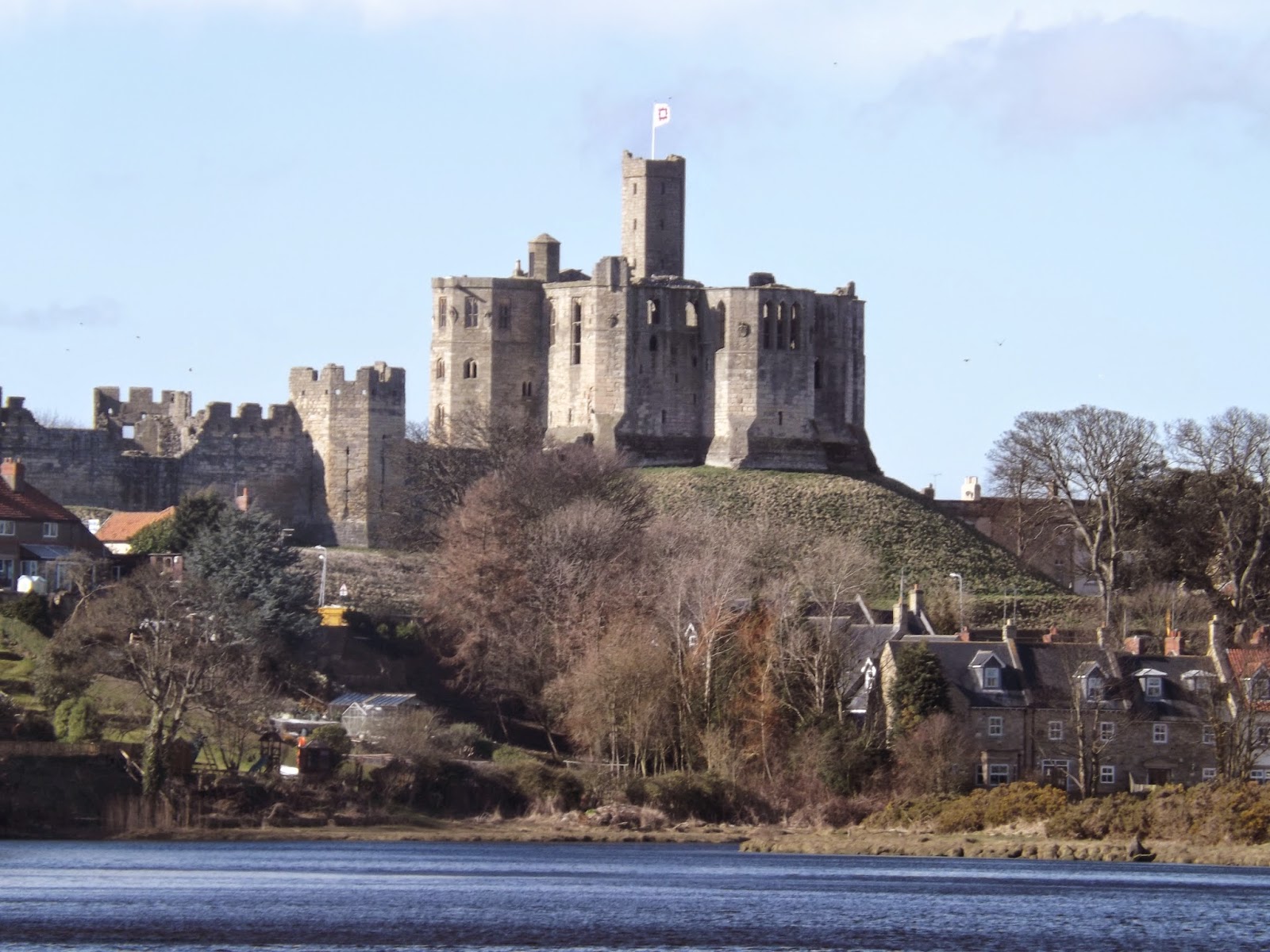 The road turned and started to climb up to the castle. I walked passed and followed the road right onto the high street. 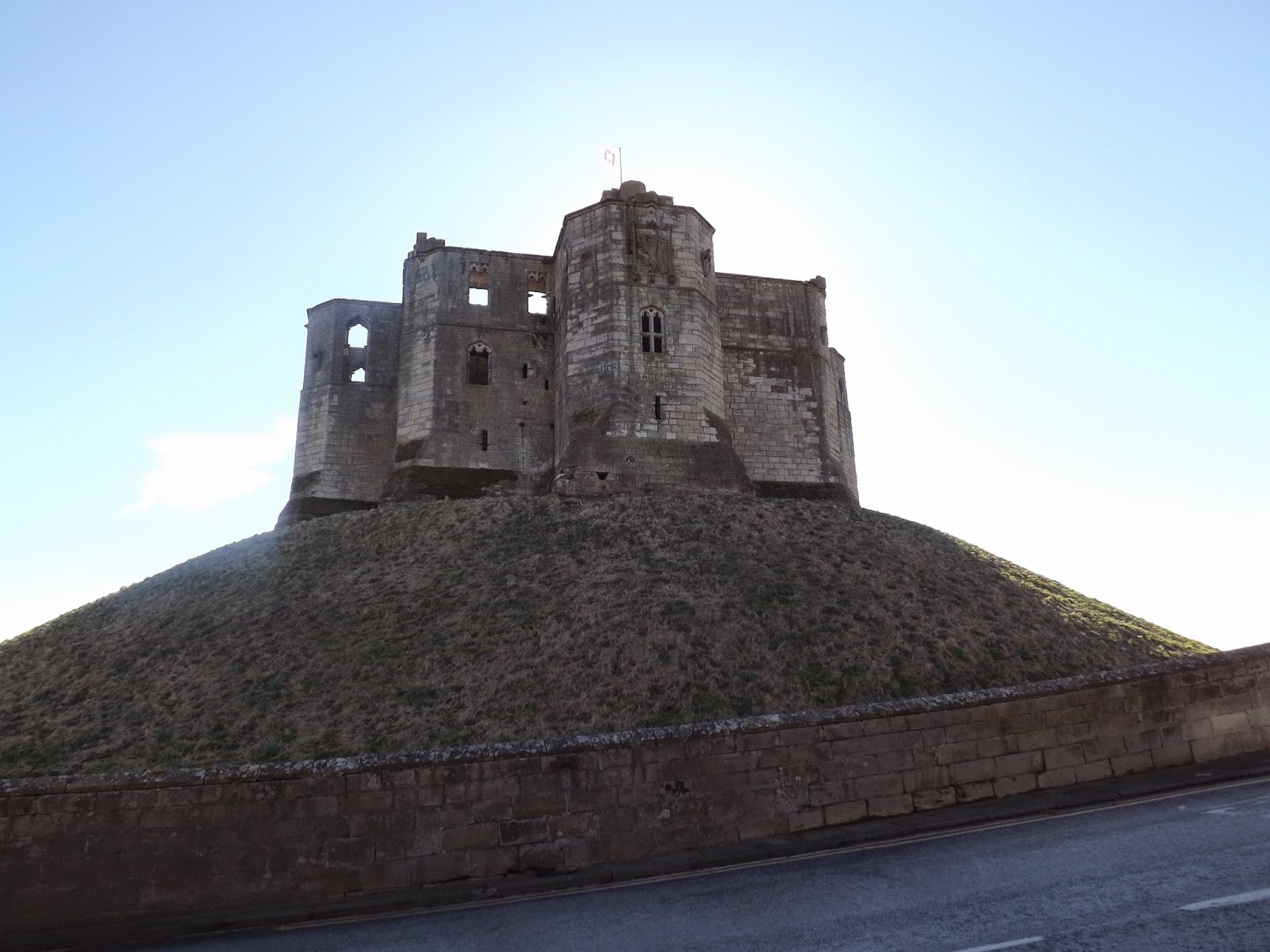 What an interesting place, it had been years since I was last here, so long ago.  I continued down the road and turned right again. Across the road was the old gate and bridge. 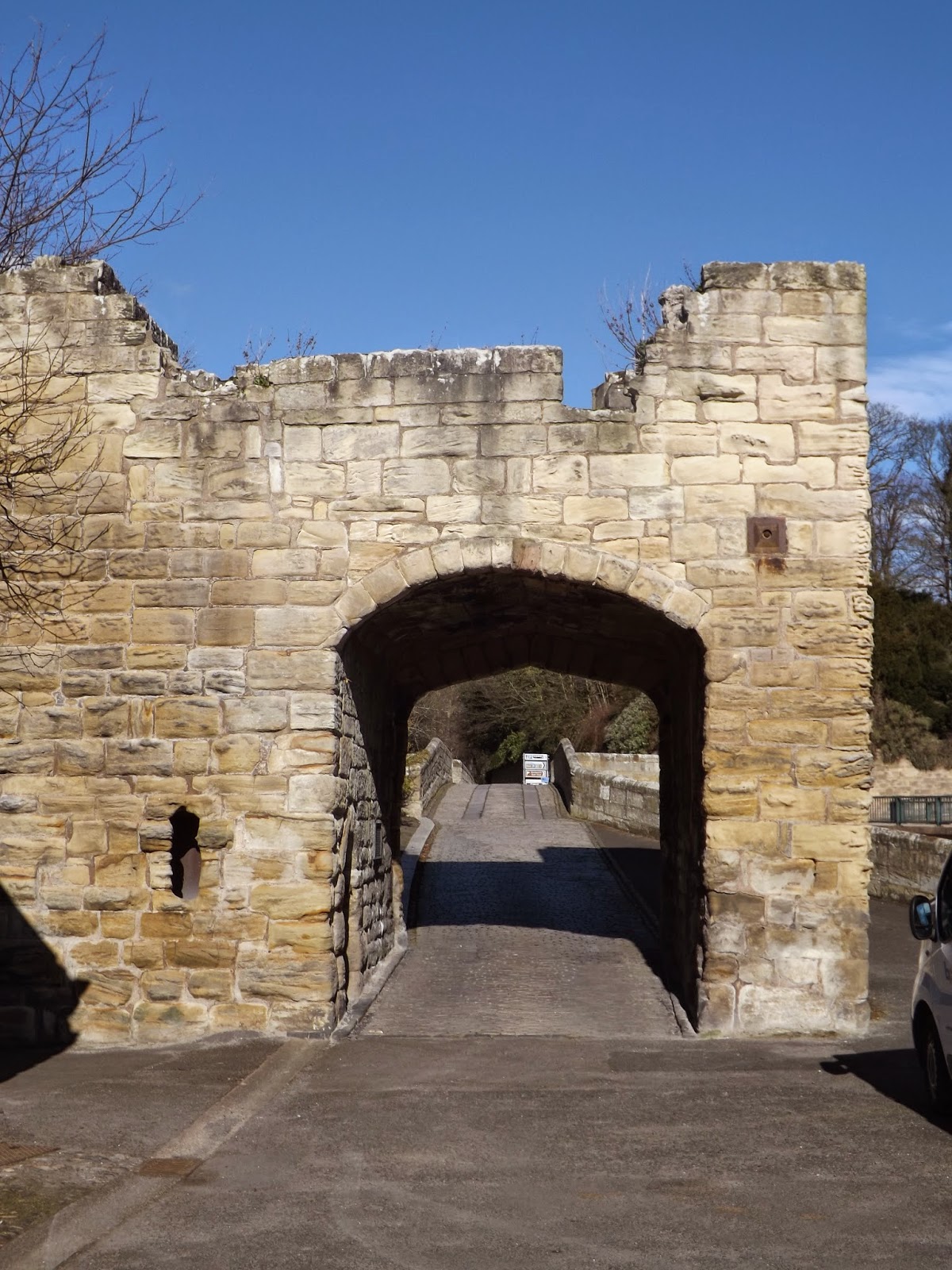 I took the path over the old bridge, crossed the road and took the road up towards the Coquet View Leisure Park.  At the top the road passes an old church and levels out down towards the park.  I checked the time, I had wanted to continue but I only had a few hours.  I sat at a park bench and had my snack, overlooking a part of the golf course.  It was time to return.  At the bottom of the hill I turned and followed the road by the river. 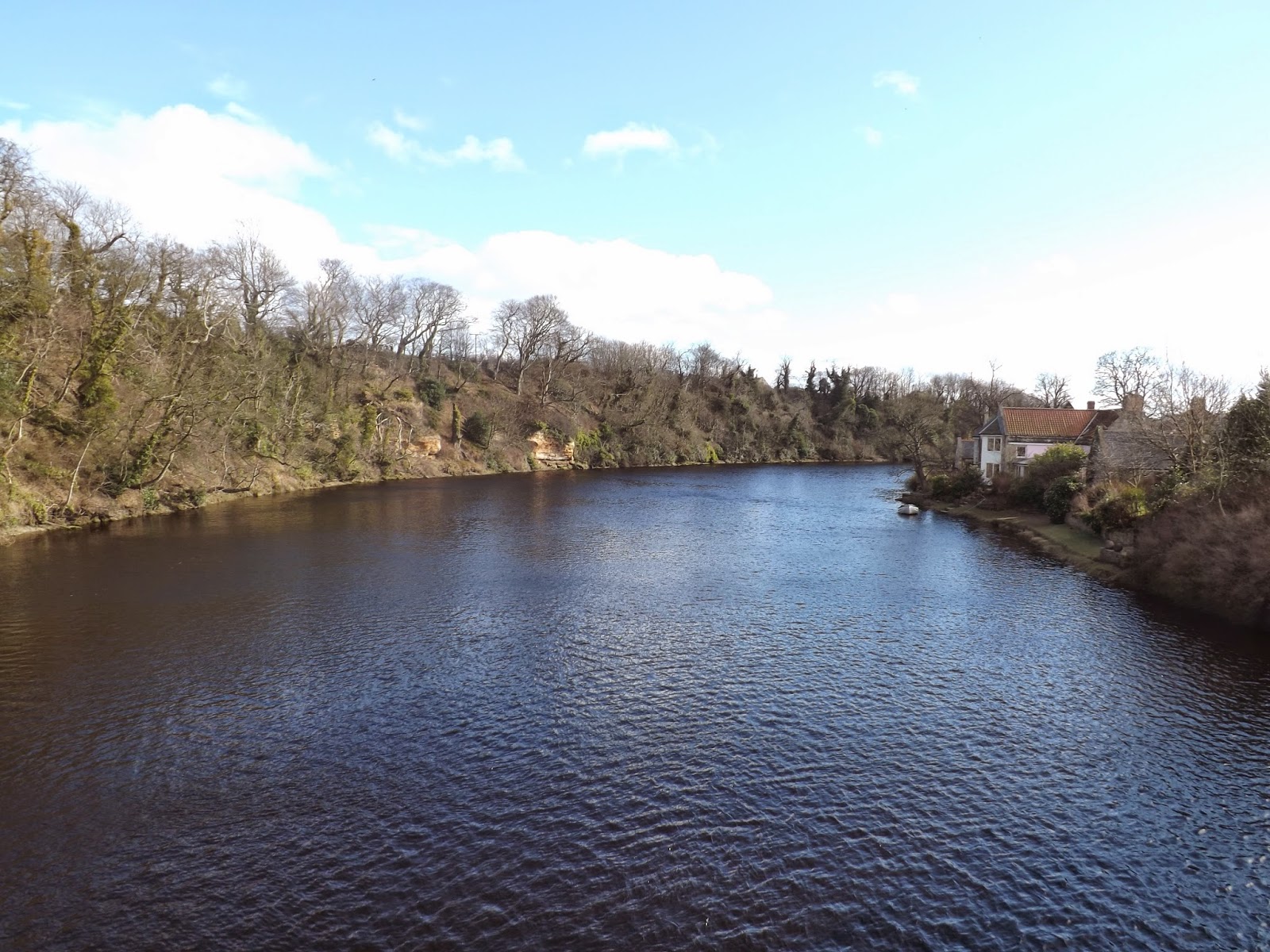 I followed this road back and up towards the castle. 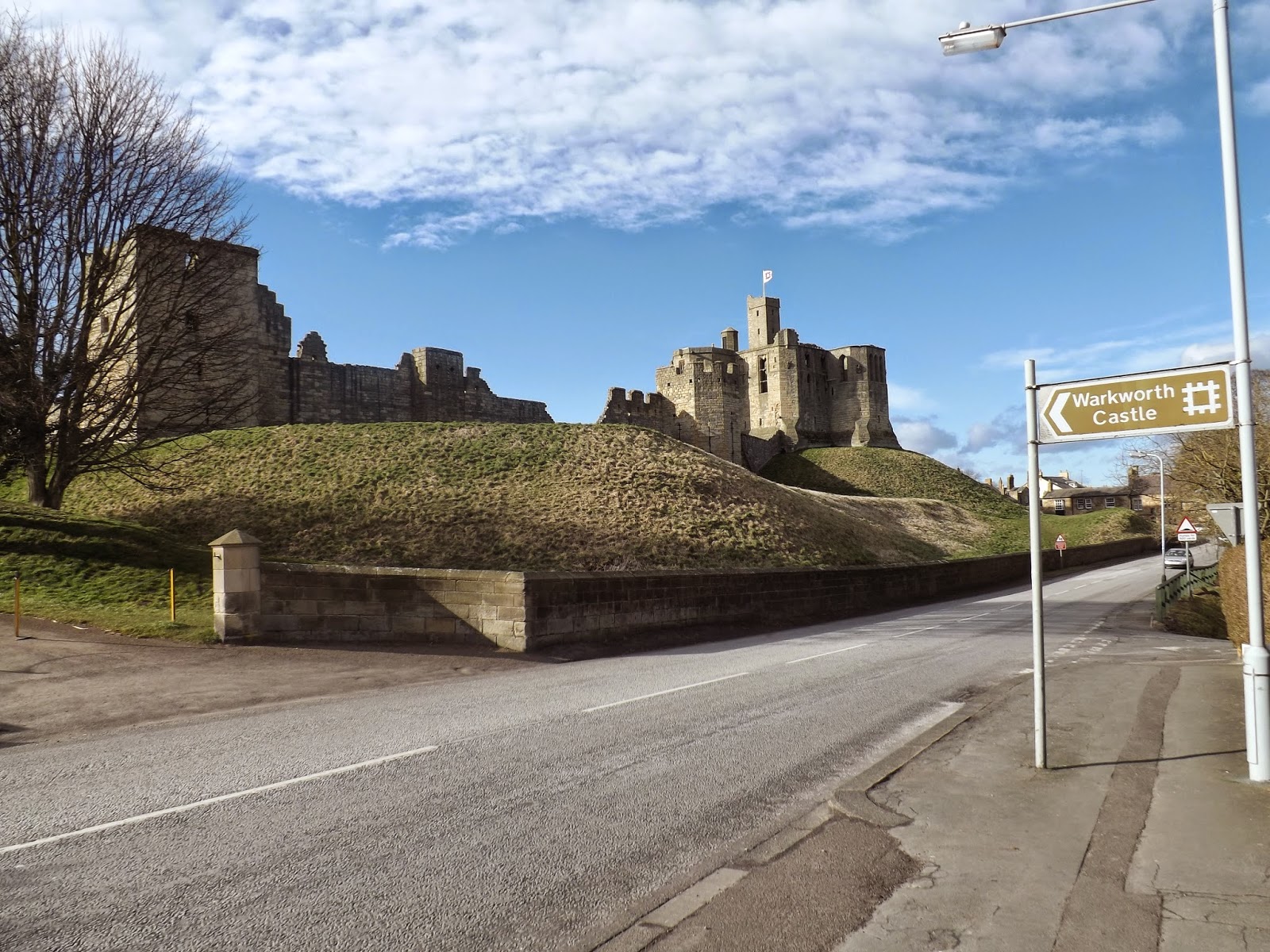 I turned left back towards Amble.  Taking the footpath by the river towards the yacht club, I walked by the river and then across to the boat yard. 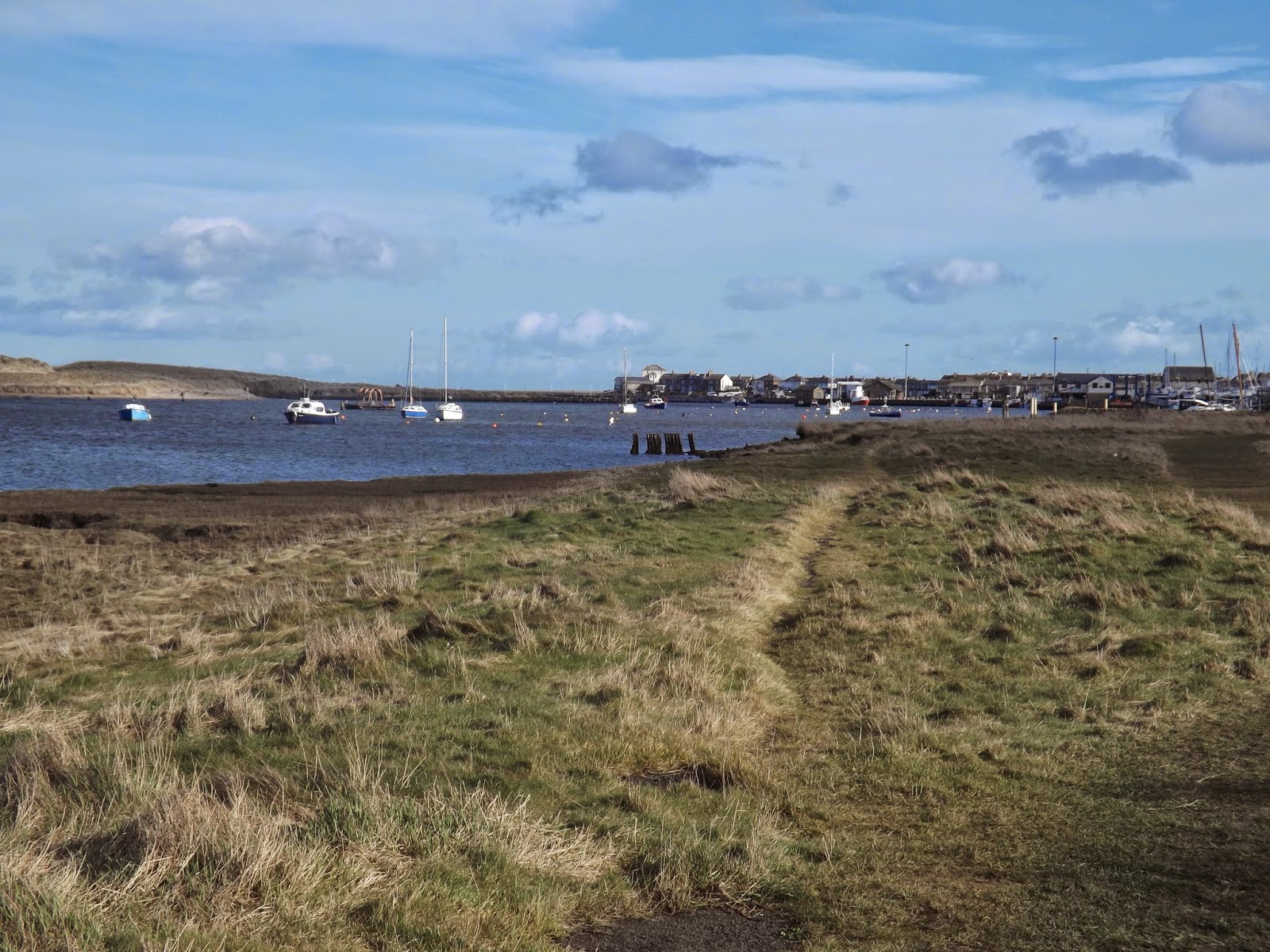 I passed the town and was back on the quay side near the lifeboat station. I crossed the quay and passed the side of the jetties, back to the play area. Then I was on the footpath over the dunes. The tide was in and I could have walked the beach but I wanted to look a little further in land. 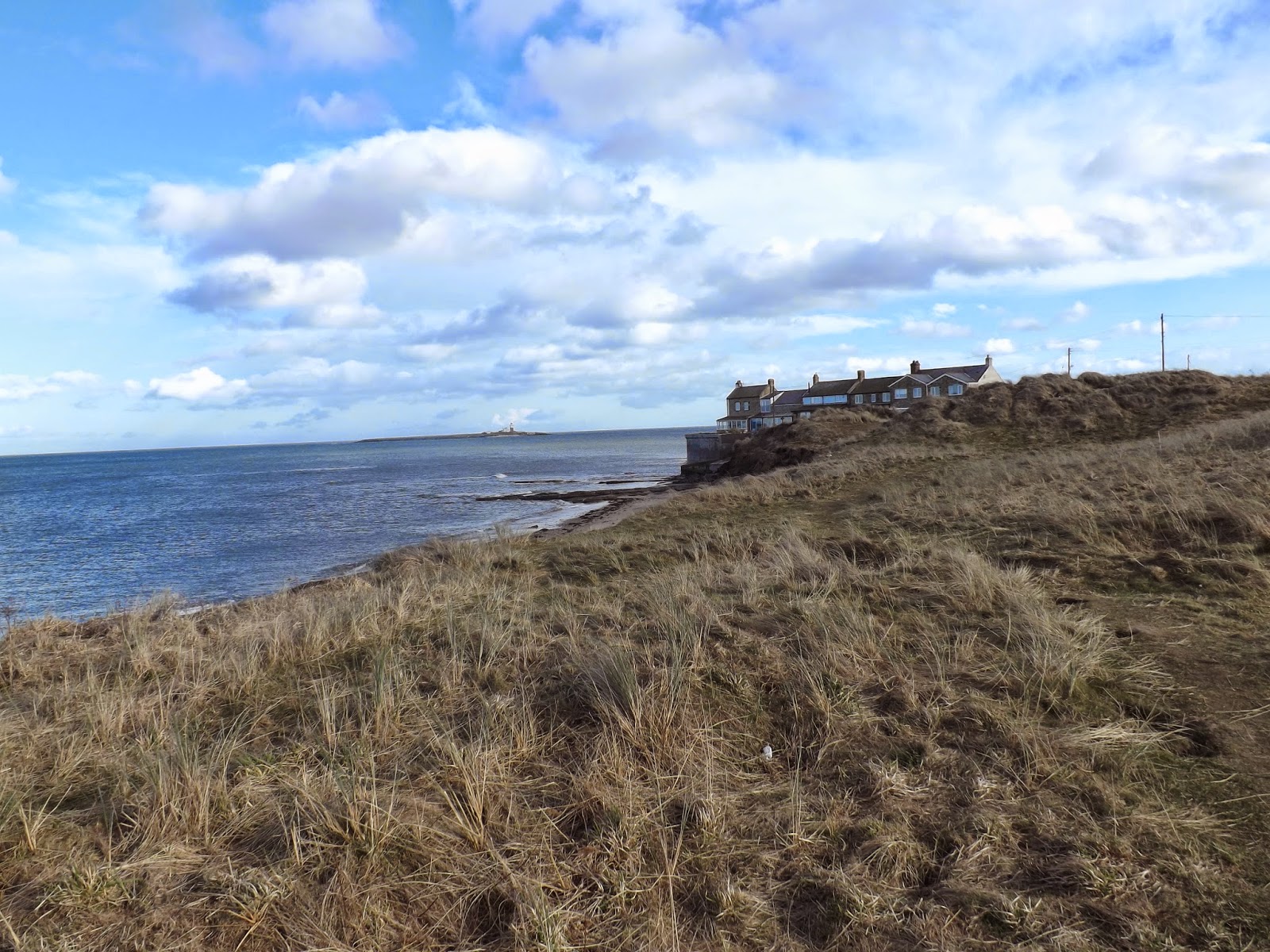 This time instead of walking along the beach I climbed the dunes and followed the higher ground.  This gave me a different view of the area. 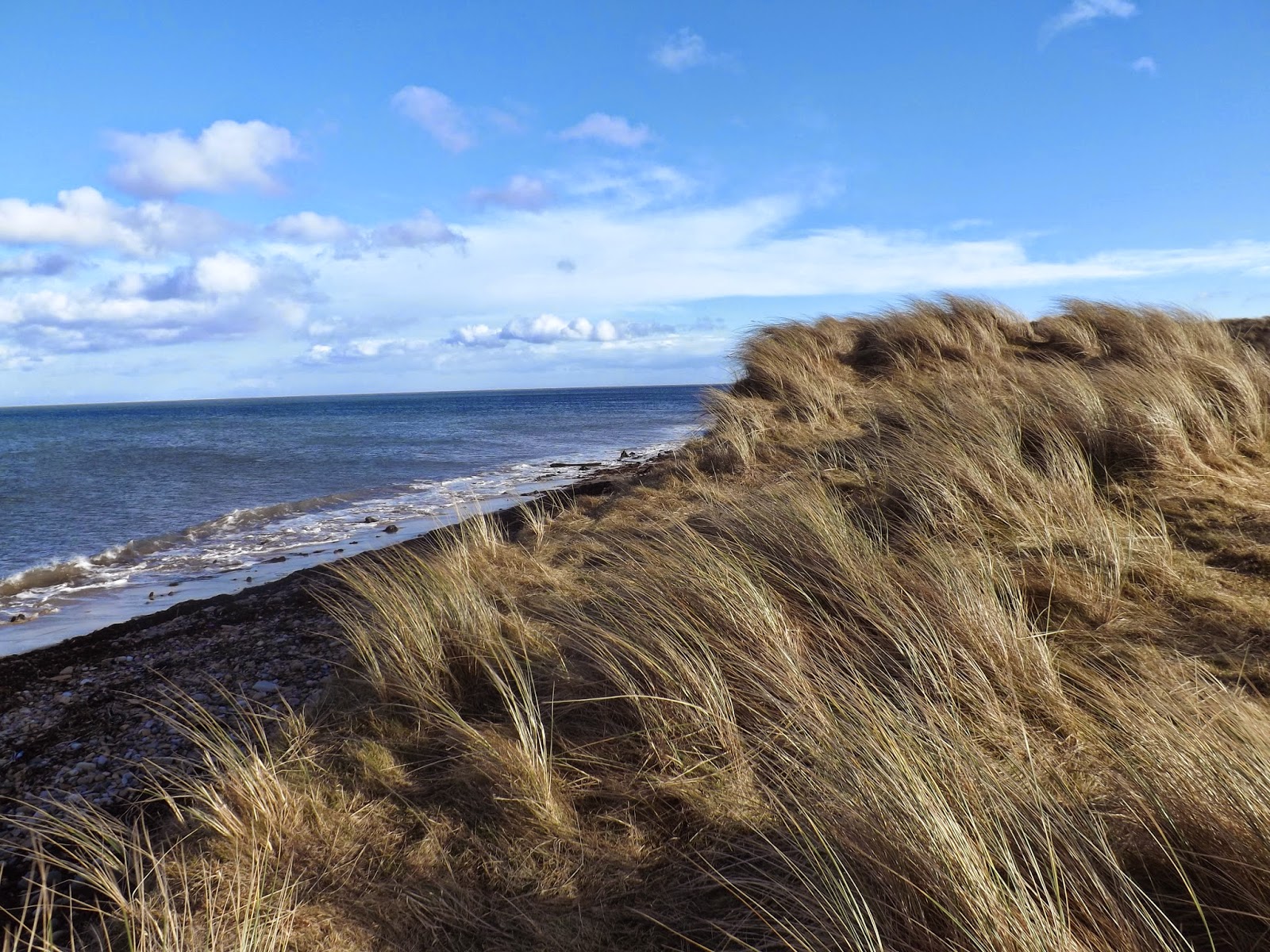 I took the path into Low Hauxley, the farmer must have been busy spraying his fields. 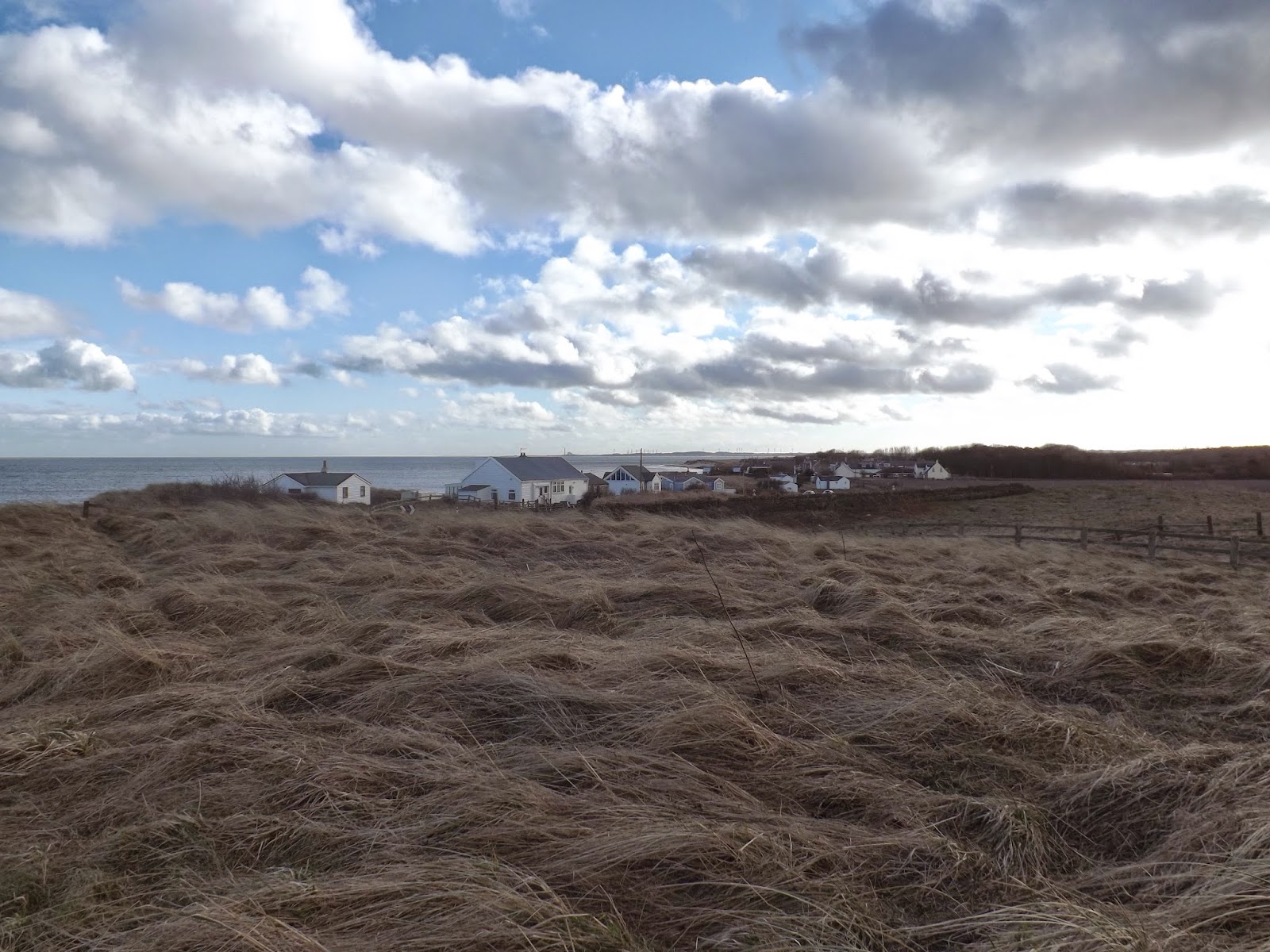 I returned to the beach. 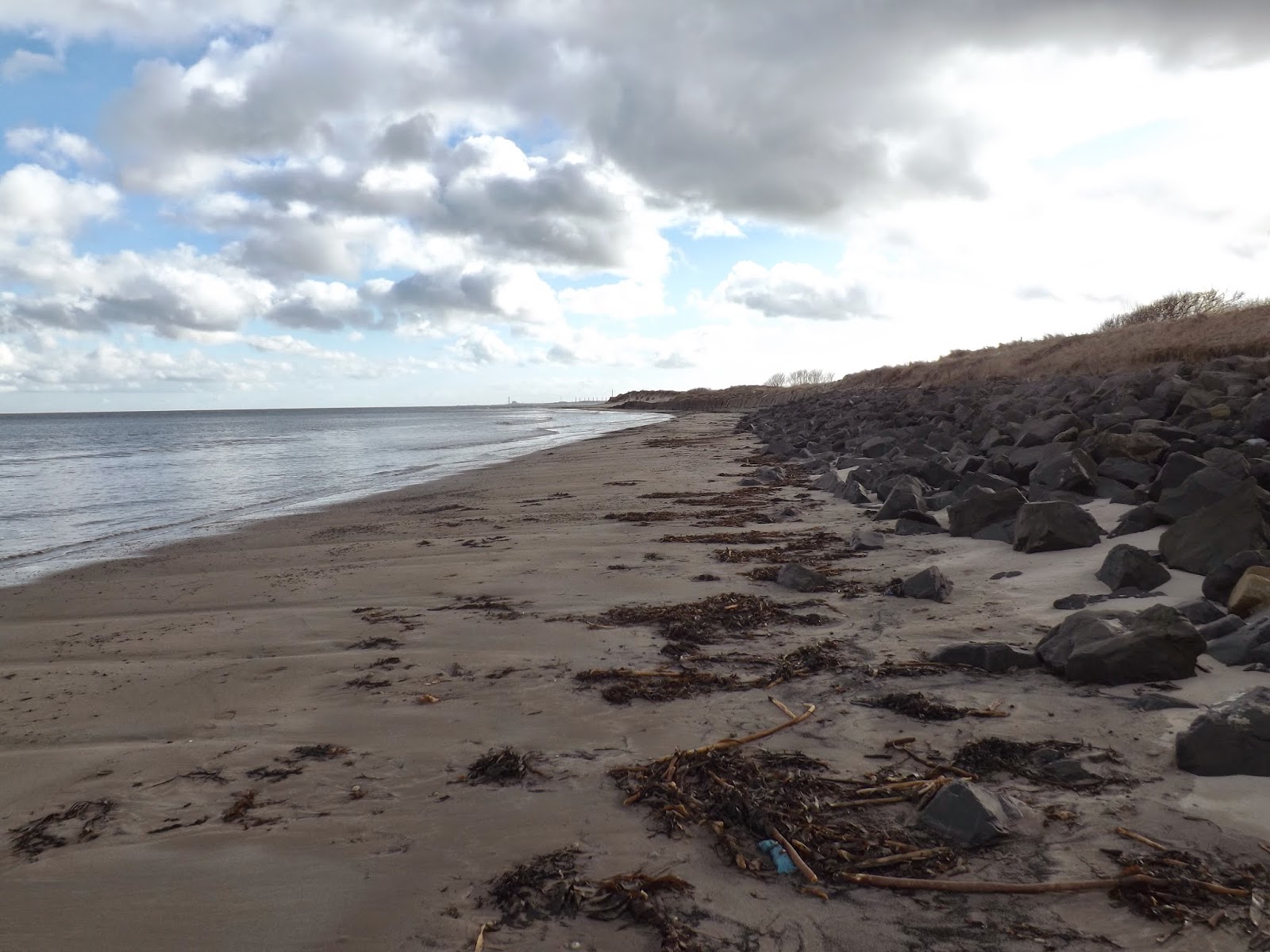 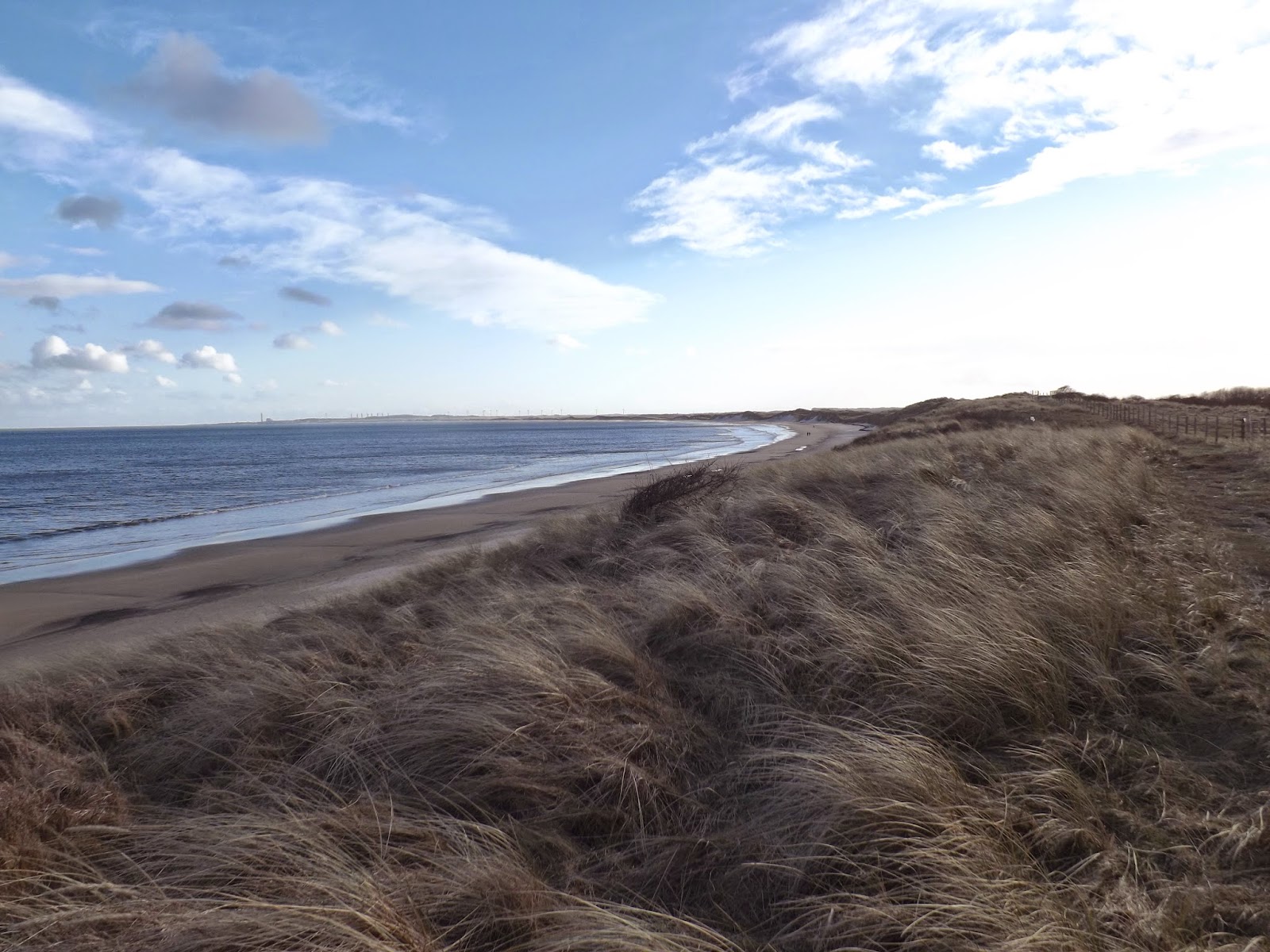 As I approached Druridge Bay I turned back onto a road and walked back through the country park to the visitor centre. 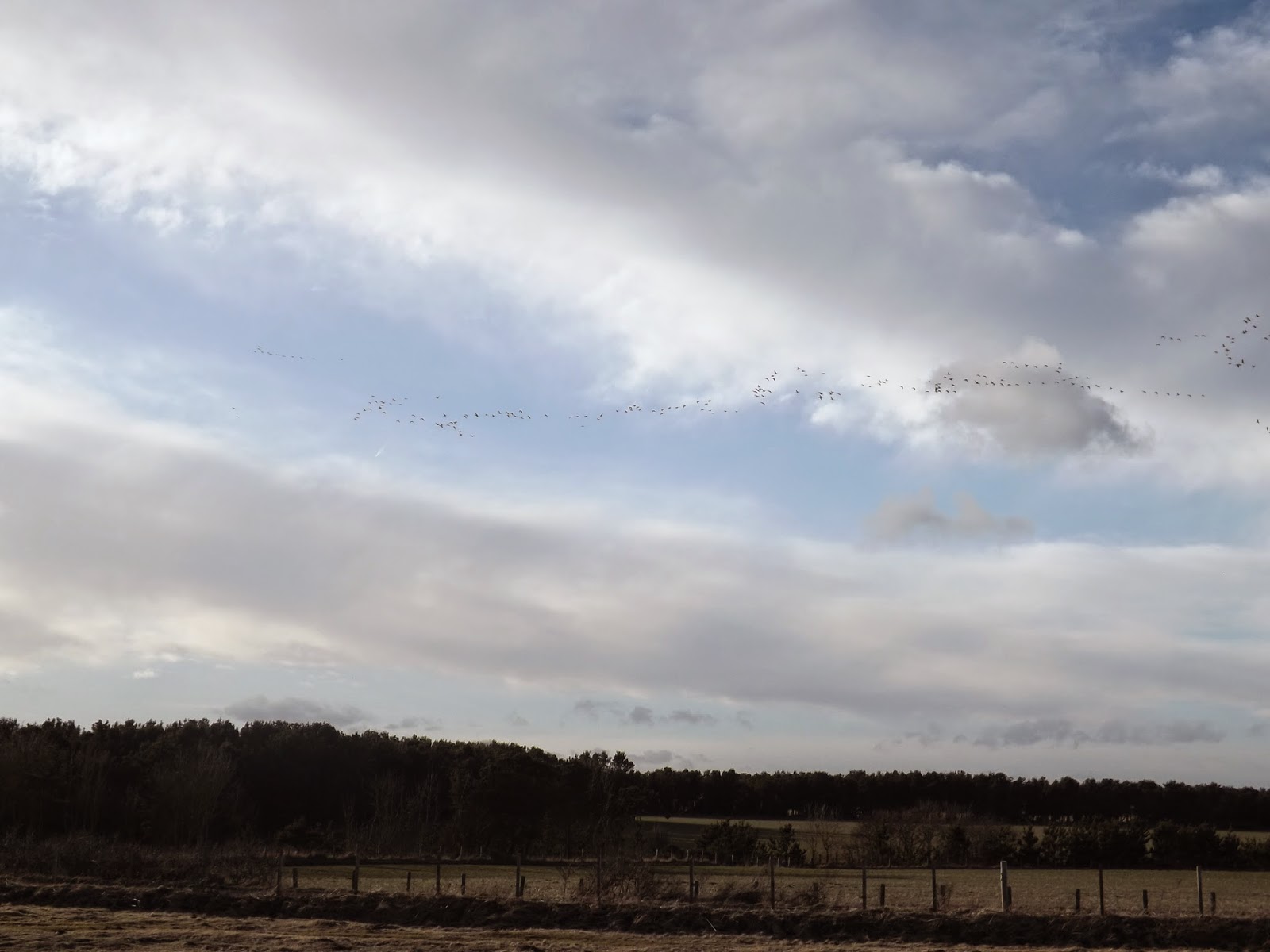 I had covered approx 20km with very little climb.

Boz North
Details correct at time of writing.
Follow link to walk further up the coast from Warkworth to Boulmer.