I am not sure if I should write this up as a walk on my blog or not, but because of the occasion and what it represents I have decided to include it.

Anne had forward our names to be part of The People's Procession and it was an honour and a privilege to take part, especially in remembrance of what the occasion represented. Unfortunately the photographs have not come out as clear or as good as I would have liked.  I should also point out the distance I have shown above is the distance we walked throughout the whole day and not the distance of The Procession.

We left our hotel near Paddington Station and headed south east down streets towards Hyde Park. Fortunately it was dry although there were many puddles still standing following the heavy rains on the Saturday.

Crossing Hyde Park the low morning sun was very bright and in our eyes. We passed The Serpentine and a large area fenced off area being prepared to be the London Winter Wonderland.

Crossing the road near Hyde Park Corner we could see loads of people gathering near Wellington Arch and the Royal Artillery Memorial. Seats had been set up and areas cordoned off. 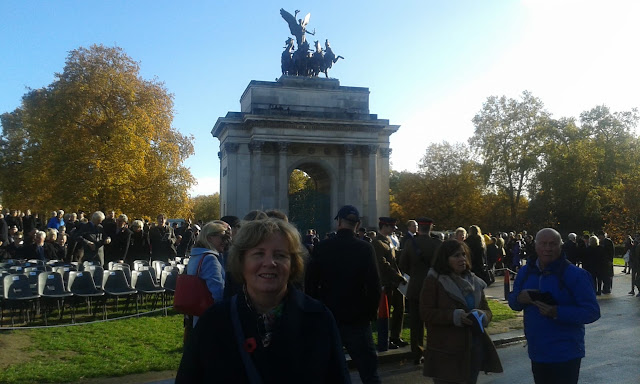 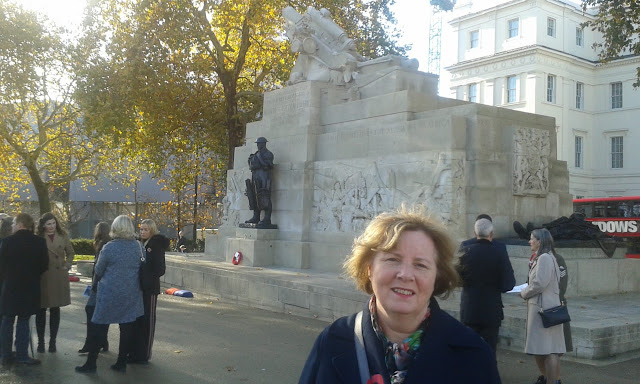 Walking passed Wellington Arch we crossed the road to walk down Constitution Hill. We could not walk passed Buckingham Palace without taking a photo. The Royal Standard was flying showing Her Majesty was in residence. 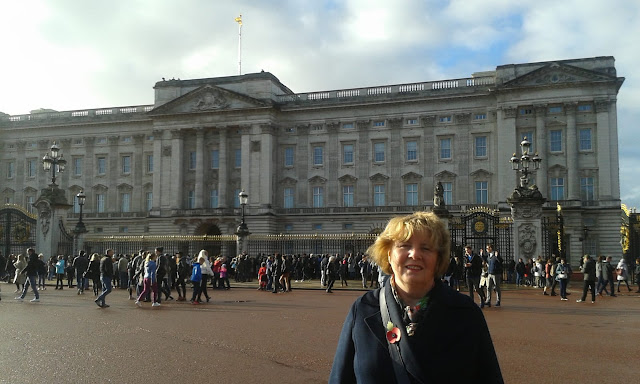 As all the roads had been closed off we just wandered across to take photos at The Queen Victoria Memorial. 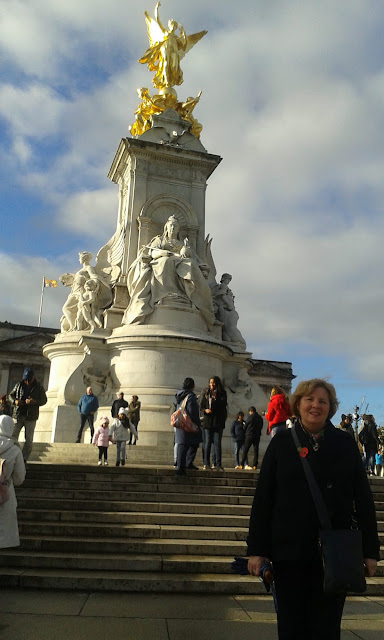 Then we were on The Mall, carrying on up The Mall we joined the queue to enter the waiting area along with many others. We quickly received our wristbands which told us which column we were allocated to walk in. This allowed us access to a number of stalls and large screens. Anne could not resist having a look at an old London bus used to transport troops during WW1. 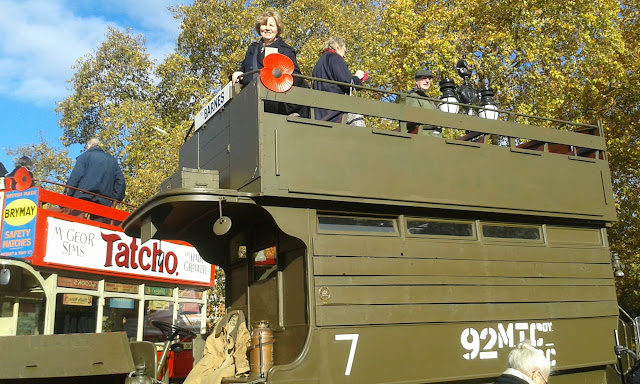 We could see Admiralty Arch in the distance. Everyone was good natured and patient as we waited to set off.

We saw The Kings Troop Royal Horse Artillery ride passed. Watching a large screen we saw the events as they happened. 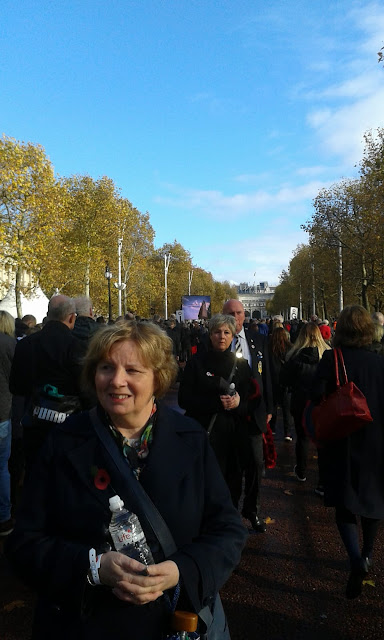 It was not long before we heard the gun fire and then after a short while we saw The Kings Troop Royal Artillery return down The Mall. 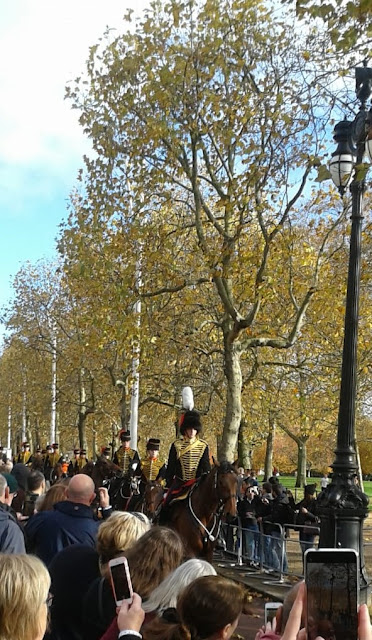 While we waited we saw many of the Veterans walking back down through St James's Park. Many of them would be home and sitting down to dinner before we even started our Procession.

Eventually we moved forward a few hundred meters before we stopped again. 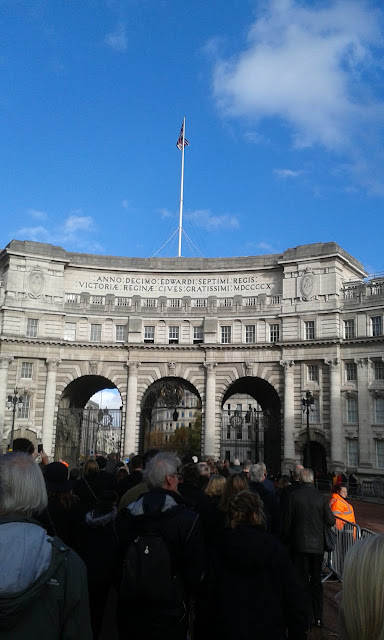 Passing under Admiralty Arch we had another wait, we could see Nelson looking over the buildings to our left. 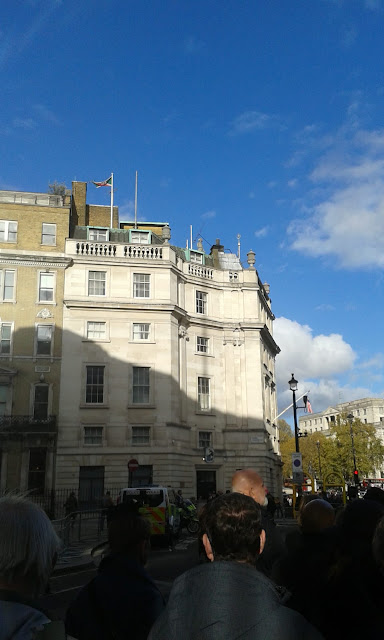 A right turn down Whitehall before we were stopped again. We could see The Cenotaph just ahead. A band led the next column down on our right before they stopped to allow us to walk on. 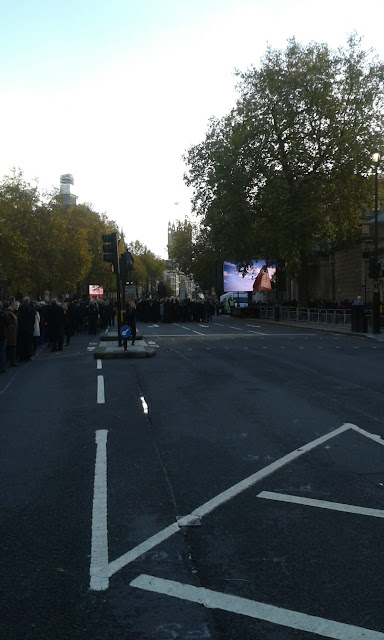 We crossed over to the right of the road which allowed us to walk with The Cenotaph to our left.
The ground was covered with hundreds if not thousands of wreaths from organisations and groups from all over the UK and The World. 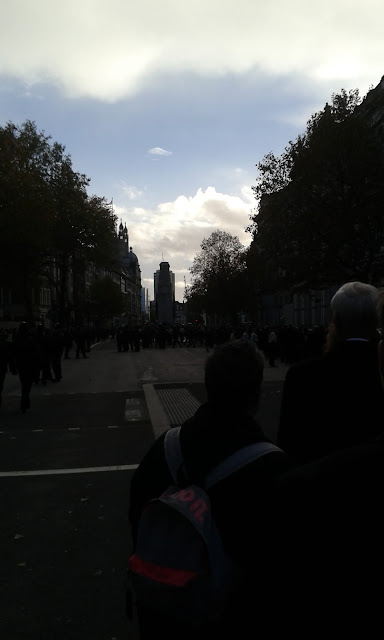 Cheers and applause greeted us at the bottom of Whitehall, we turned right up along Great George Street. In the event details we had been told we would walk back round to St James's Park and disperse there for 1.30pm. It was after 2.00pm when we were walking passed The Cenotaph, and there were a number of other columns after us. People were just walking off from here so we just followed. 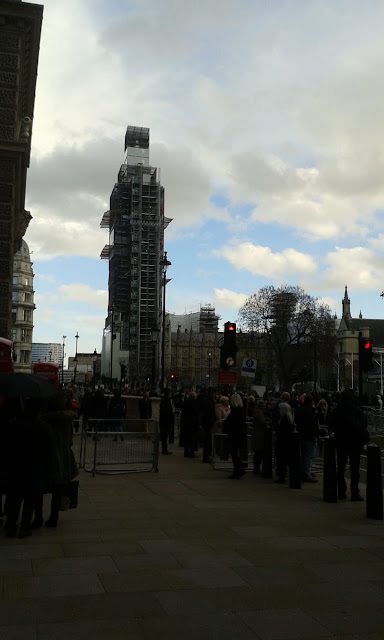 Our David lives in London so we found a quite place to stand and gave him a ring and arranged to meet him at the Embankment.

On our way we crossed beside Parliament Square and thought about going into Westminster Abbey to see the tomb of the Unknown Soldier. We passed by the Garden of Remembrance, it was full of people and this was just a short section of the number of crosses representing the soldiers killed. 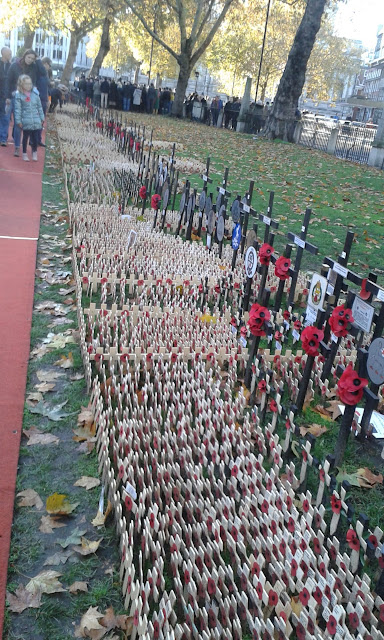 The Abbey was closed so we moved on, passing Westminster, down to The River and walking north by New Scotland Yard. 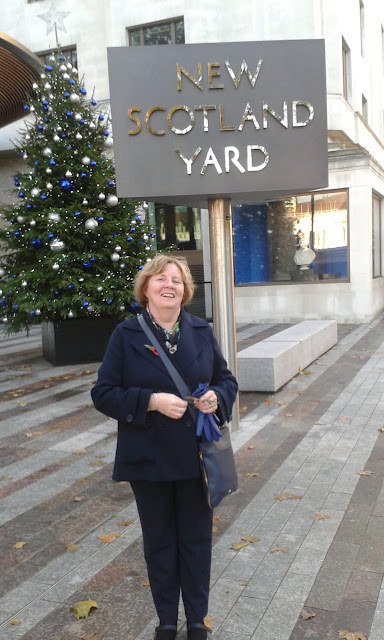 Reaching the Embankment Underground we found a coffee shop were we had a short rest and a coffee the first sit down since leaving our hotel early this morning.

David joined us and we walked through Victoria Embankment Gardens passing this statue to Arthur Sullivan. 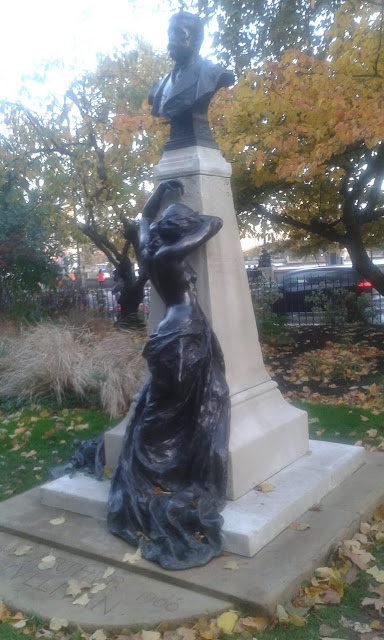 Following the river we were heading towards The Tower and the WW1 Tribute. On our way we passed many sites. 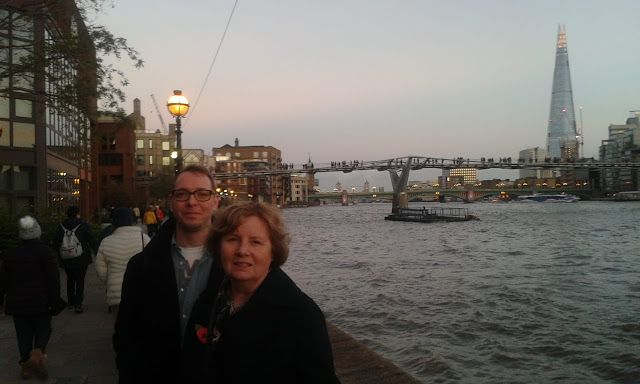 I was able to collect one of the many Geocaches on the way. Time was running out and it was getting dark. 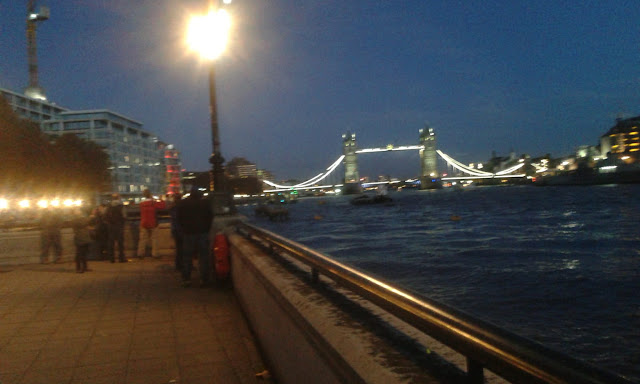 Arriving at The Tower there was thousands and thousands of people. We could not get near. After watching the event on one of the large screens, where we could hear the bugler, we decided to get something to eat and return later. 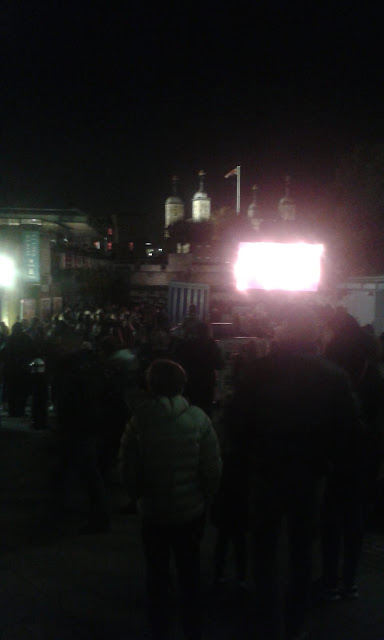 The hope was that later in the evening we would get close enough to see the lanterns. But unfortunately we could not get any near the crowds were heavier. So we made the decision to move away and find somewhere for a drink and a rest, it had been a long day.

It had been a day of thoughtfulness and reflection, I was glad to have taken part in the event to mark the remembrance of the people who had died for me. Thank You.

With all our walking and wandering we had covered over 30km with over 200m climb.

Following my write up Anne has received a link from the organisers of the event. Video of Event
Anne also spotted us at about 1.47 minutes. The link will take you to the organisers official post.