The Haltwhistle Rings - Northumberland 17 May 2018

Thank you Lisa for organising, planning and leading this walk. It has been some time since I was last out walking and Lisa had picked a perfect day.

It was good to smell and breath the fresh air of the countryside, feel the ground beneath my feet, the sun on my face and share it all with friends and good company.

We parked near the town centre in Haltwhistle and once we had gathered set off east down Westgate the Main Street. Near the Centre of Britain we turned left, north up a narrow alley that led us into the Sainsbury's carpark.

Leaving Sainsbury's we turned right, east onto Fair Hill. After a few hundred meters we passed a housing estate the site of the old school. Just after the school stone we took a footpath left, north signposted To Pyke Dyke Neuk. 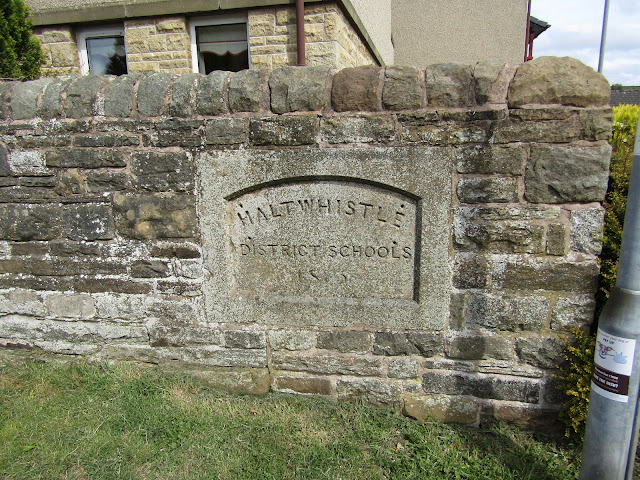 Continuing north through a kissing gate, dropping down we left the houses behind. Walking passed a well manicured field to our left. 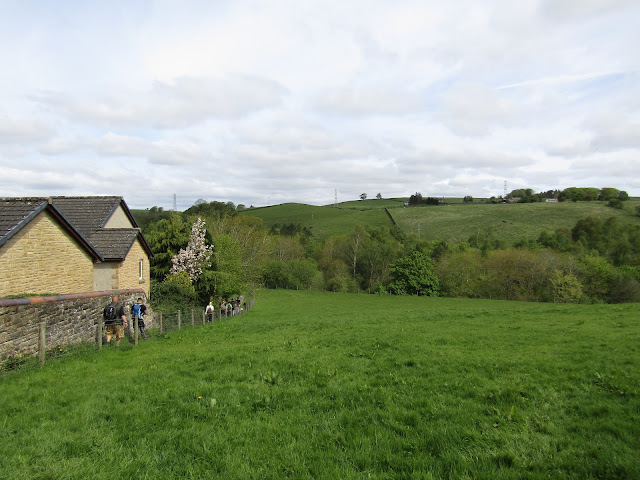 The path dropped slightly, as it turns north west on the edge of some trees we were just above Haltwhistle Burn. Rafi had a good time jumping in and out of the Burn.

Continuing north west with the Burn to our right, under the trees we reached a metal road. Following the road and crossing over the bridge we now continued on the left hand side of the Burn. Passing what looked like an old mill. 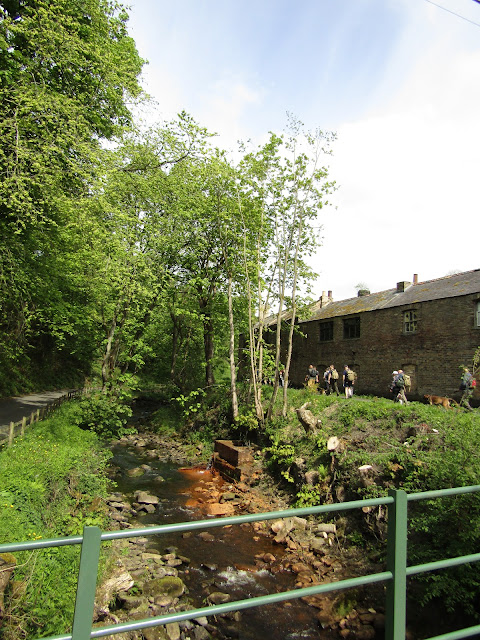 We passed what looked like an old railway platform but thought it could not have been, however on reading Lisa's note it shows a mineral railway had ran along here in the past.

I took a few photos trying to capture the light through the trees and as it shone on the water and stones but none of the photos show how nice it was. Following the Burn our path started to turn towards the north east. 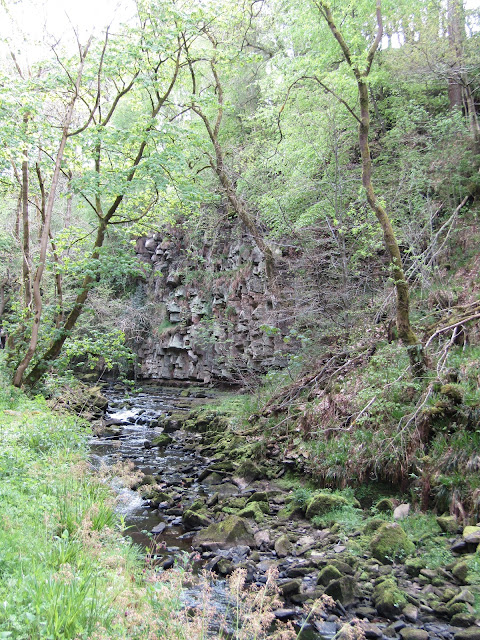 It was along here we saw a heron fly up into the trees. As usual by the time I got my camera out it had gone. 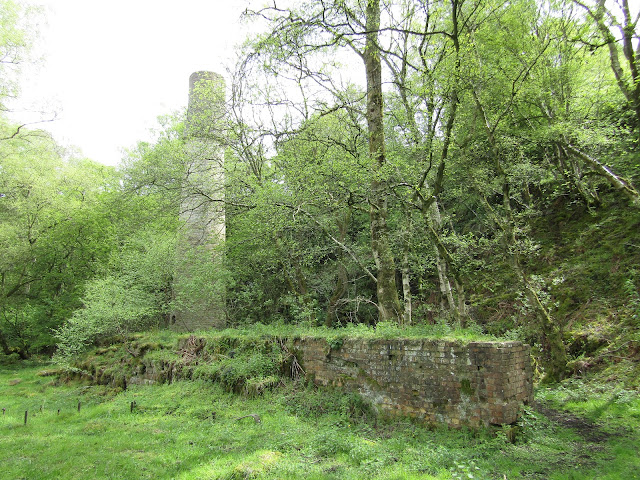 Continuing up the path up the valley our view opened up as we left the trees behind. 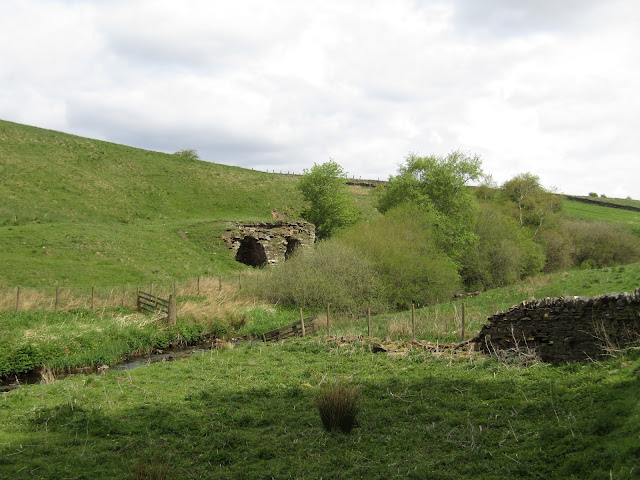 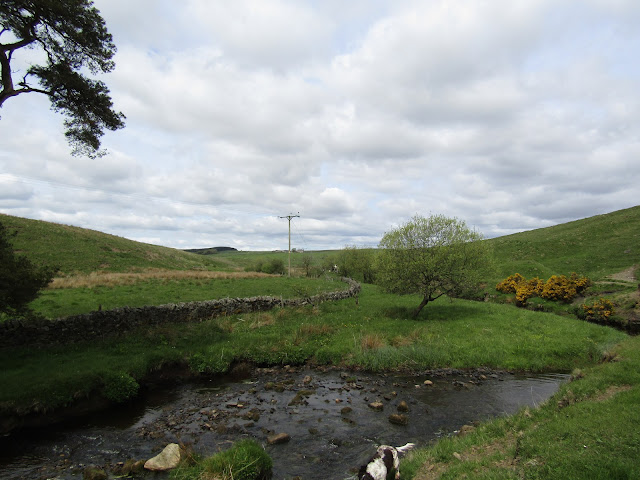 We crossed the Burn again and followed the path up a grassy slope that led north east up to the B6318 The Military Road. Crossing the road we continued eastwards a few hundred meters passing a farm before following a footpath sign, north. That lead us down a steep bank. It was near here I picked up my first Geocache of the day.

Following the Burn north we could see the Whin Sill to our front, along which part of the Roman Wall is built. 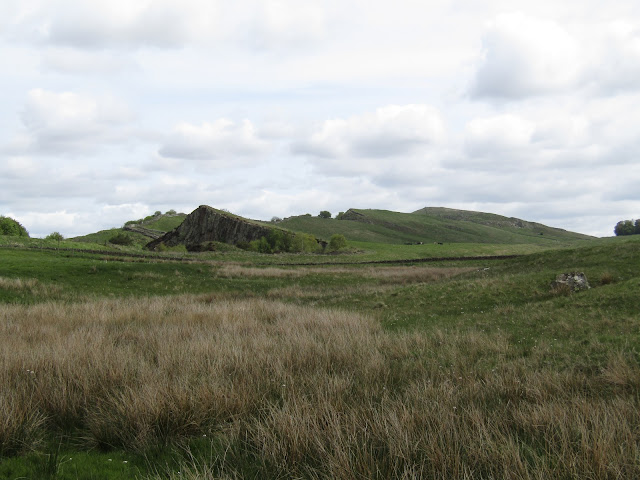 It did not take us long to see the acorn, the sign of the National Trails, the Hadrian Wall Path and Pennine Way. You can follow these links to my walks on these trails, I did not realise it was so long ago I did these walks, seems only a such a short time ago. 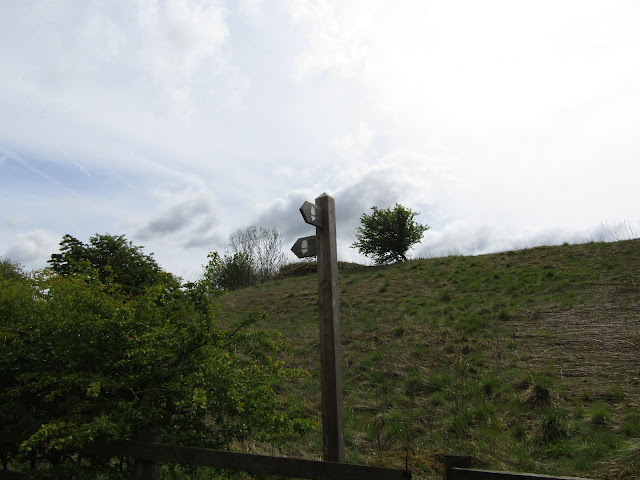 I always find it stunning at Cawfields. We had a short rest at the picnic tables, while Rafi had a splash about in the water. The weather was perfect for walking, it was not as hot as it had previously been, and we had a cool gentle breeze. 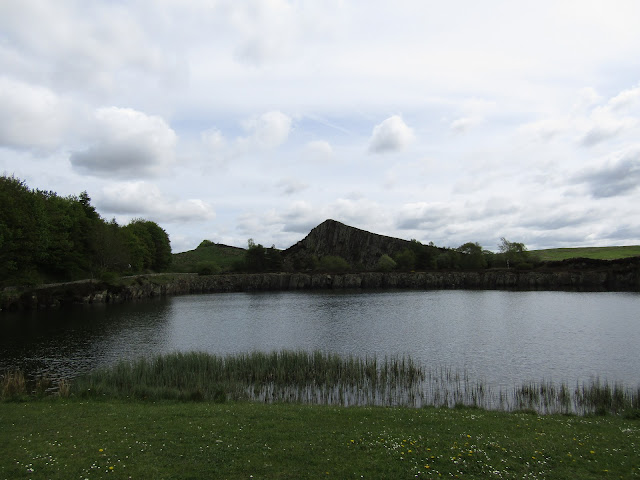 After our break we continued to the left round the old flooded quarry, walking eastwards up through Hole Gap and climbed the slope by the Wall to Milecastle 42, where I collected my second Geocache of the day. 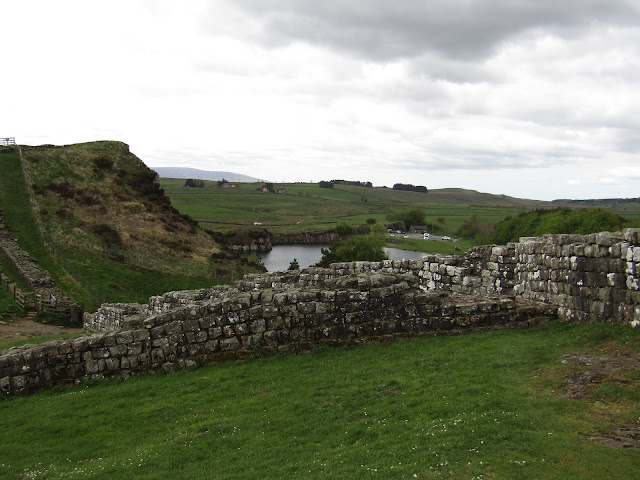 We were following the Wall now as it climbed up and down the Whin Sill. 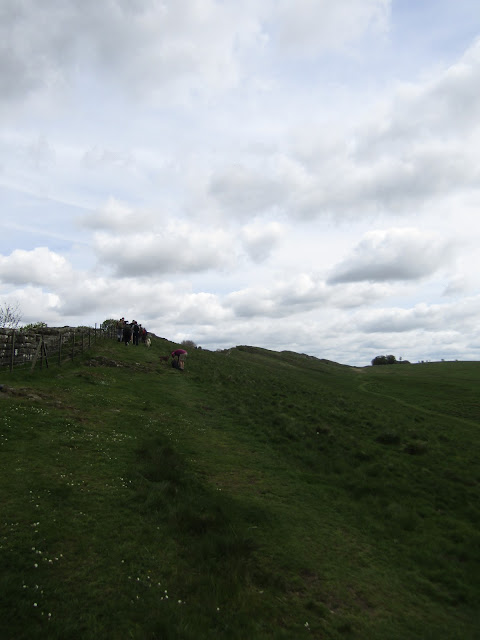 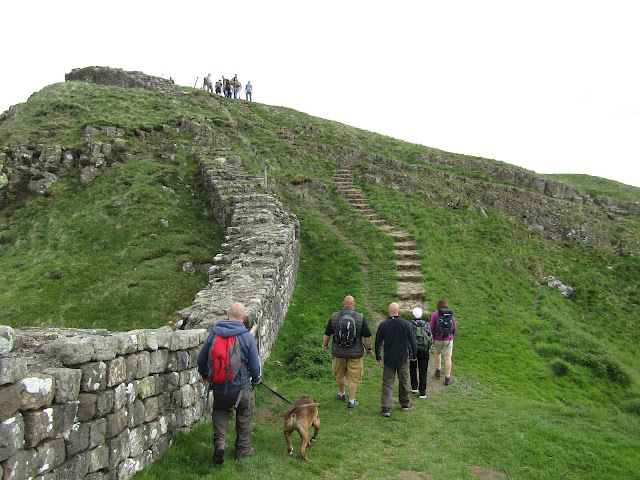 Another Geocache found unfortunately I had forgot to bring a pen. 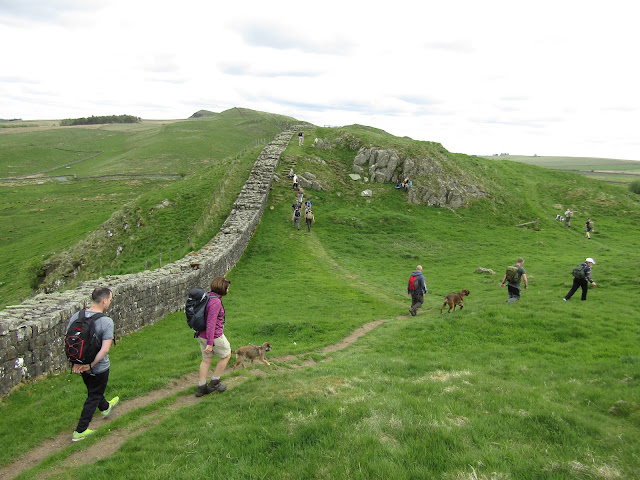 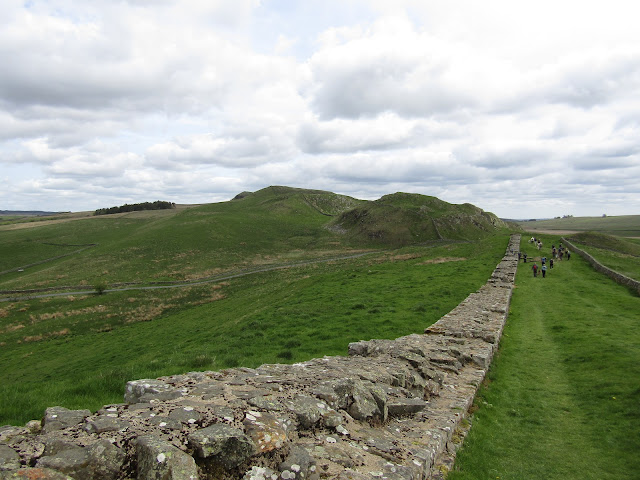 Once we reached the metalled road at Gaw Gap we crossed the road and turned right following a footpath south, south east. A little bit up and down as we crossed the Vallum. The path soon levelled as we joined a field wall which we followed south, back to the B6318 The Military Road.

After crossing The Military Road we continued south down a road that leads to Hallpeat Moss farm. Passed the farm we turned right and crossed a couple of stiles south west on the footpath that took us over open fields. 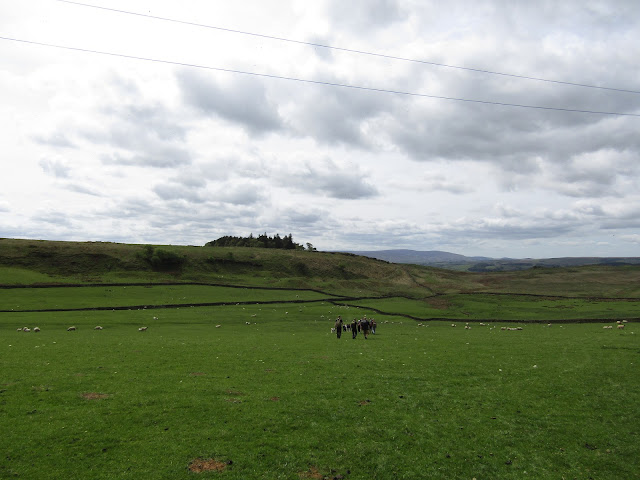 After crossing a couple of stiles we followed a grass track as it climbed up a short rise. Passing the rocks to our left. It looked as though some holes had been cut into the rock to hold wooden beams? 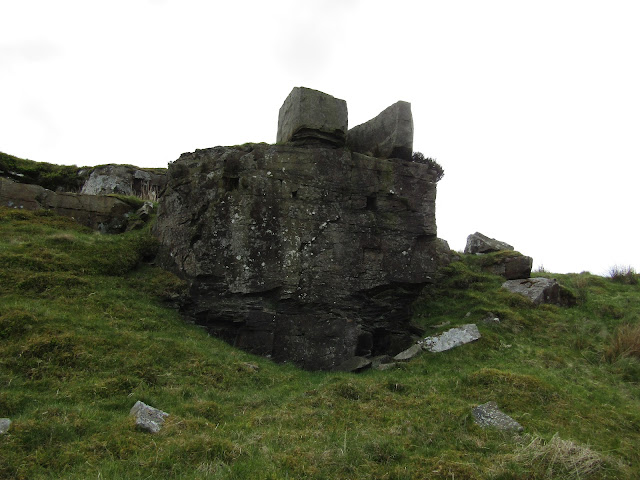 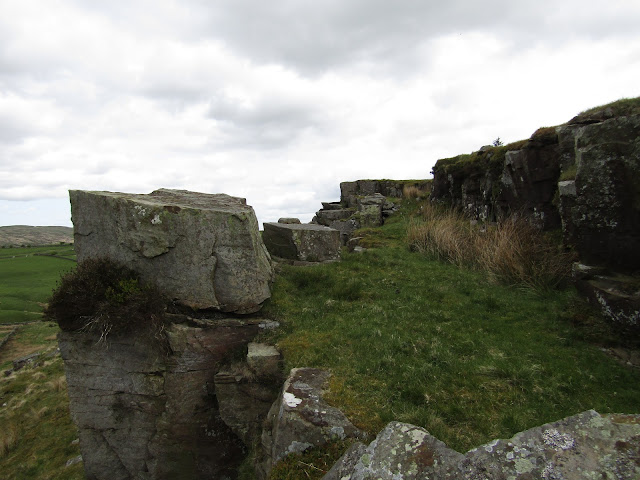 The grass track took us through a metal gate and across the fields we could see Haltwhistle in the distance. 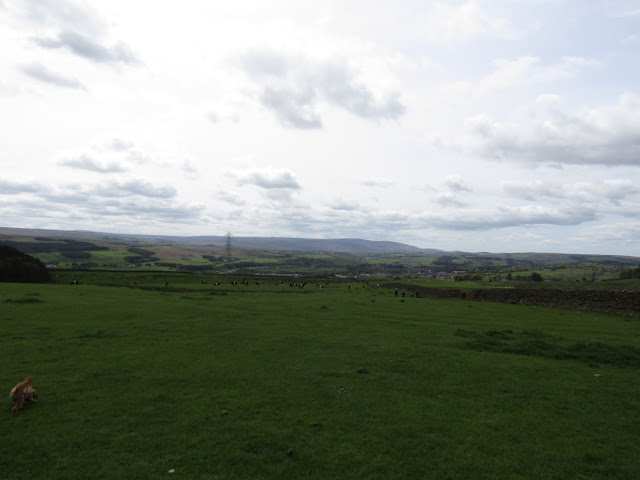 Continuing south west after crossing a few fields, as the path turned west we walked passed an old farm house at Hollincrag. 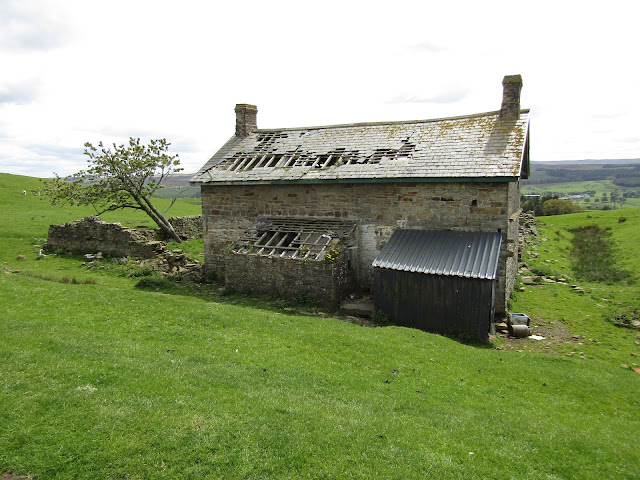 Continuing west we crossed by a farm and reached a metal road where we turned south and walked passed Pyke Dyke Neuk. Where I found another Geocache.

It was then through a gate onto a footpath that took us south west by a wall and over a narrow stream. A kissing gate at the corner of the field and we saw this handsome chap. 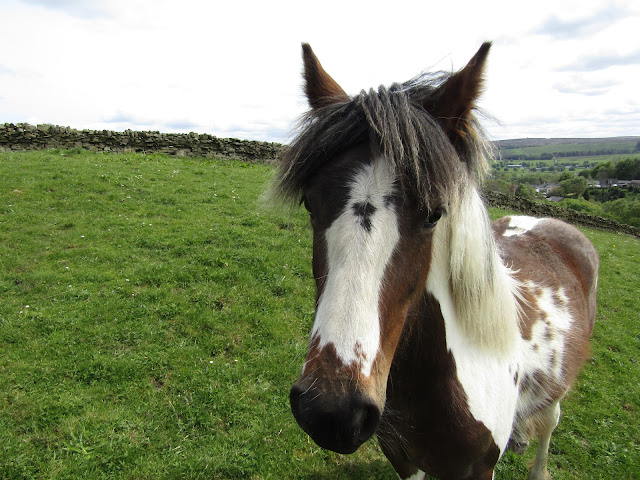 Following the path and wall south down a steep slope, over a gate and we crossed a track that led to the footbridge over Haltwhistle Burn. Crossing the footbridge and climbing the bank we found ourselves on the footpath we had taken out of Haltwhistle earlier. Next to the well manicured field. 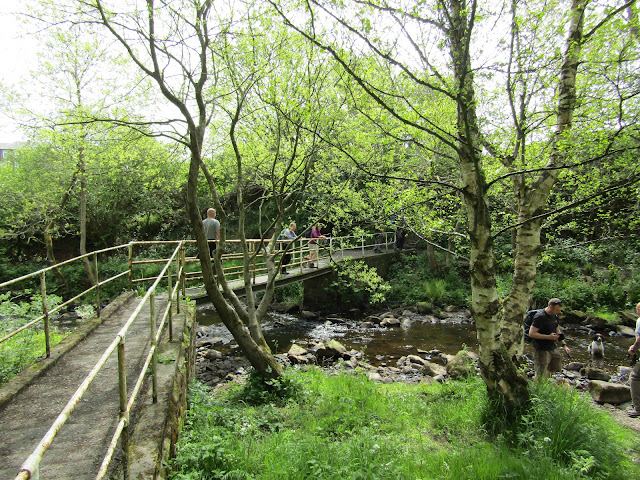 It was just a short step to walk back up the path onto Fair Hill then returning to our transport. My watch shows we had covered 11km with a 220m climb.

All thanks to Lisa for making this such a great day out. Thanks again Lisa.


Boz North
Details correct at time of writing.
Clink on the link to follow my last walk from Cawfield to Housesteads