I saw a lovely walk on the internet the other day and so I thought I would give it a go.  Unfortunately due to the time I left home I was already running a little behind on the timing, but I thought I would have a look anyway. It was a walk by someone called Geoff Holland and his site was full of interesting information.

I started in Alwinton and walked east through the village over the green and small bridge onto an ancient drovers trail called Clennell Street. 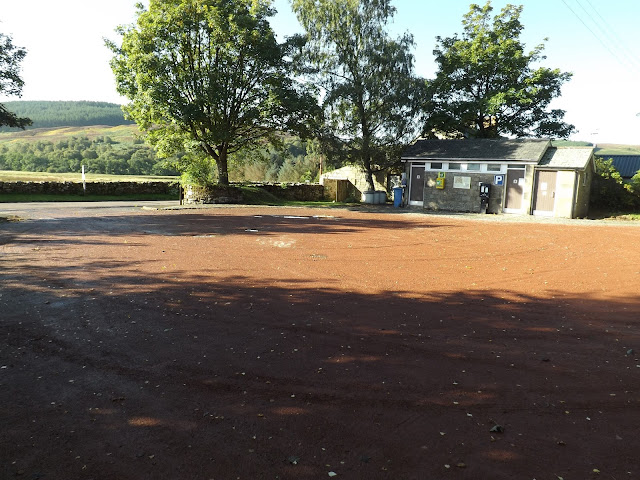 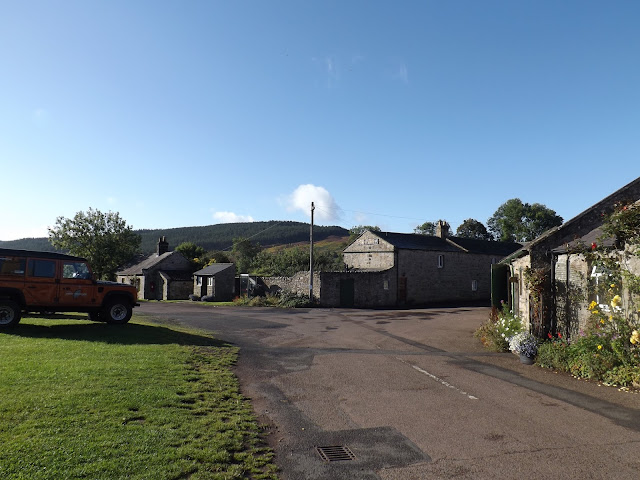 Where I headed north for approx 600m before taking a path across a style eastwards again over a couple of open fields, towards Clennell. 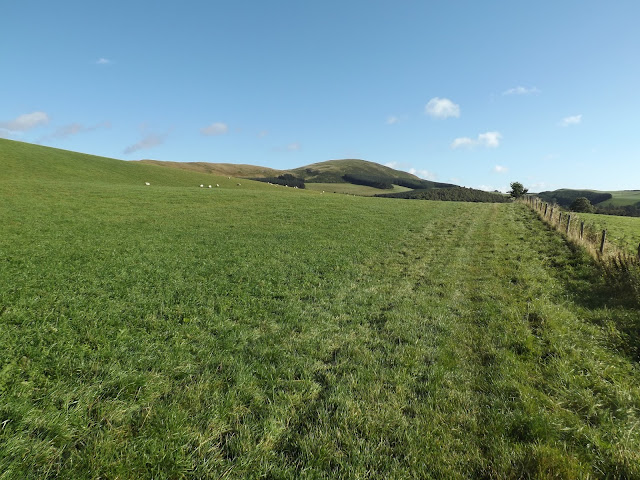 At Clennell I crossed the footbridge over the River Alwin and walked onto the road passed the west side of a farm. 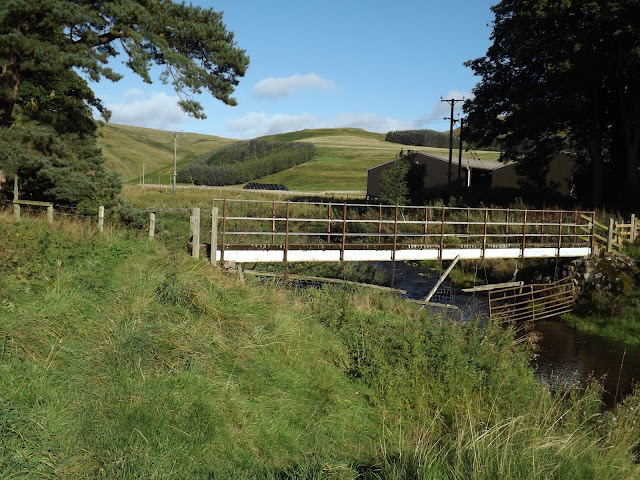 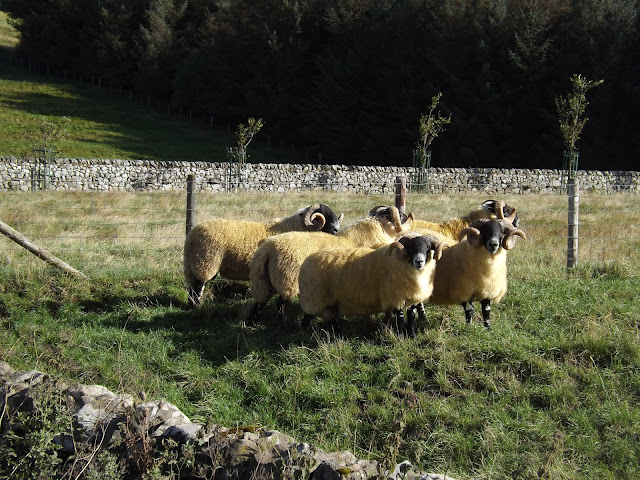 The road continued in a northern direction passed a small forestry block then below an old fort, Camp Knowe, before crossing back across the River Alwin. It was as I crossed the River Alwin for the third time at the bottom of The Dodd I realised something was wrong and I had to return back the same route to Alwinton. Turning back put over another hour onto my walk and this meant I would certainly not be able to complete the whole route today. 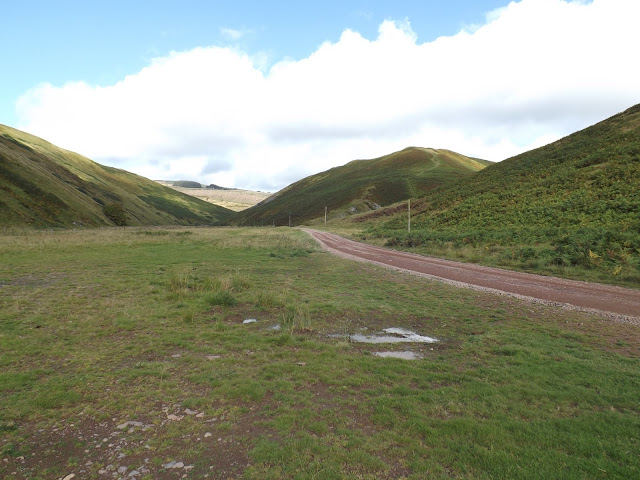 Another hour later I was back at the bottom of The Dodd ready to follow the grass path north up the 332m climb. I could see to the north east the exposed hillside from the work that had been done in harvesting the wood around Kidlandee.

From The Dodd I continued along the footpath north east over a gate and followed the fence up Puncherton Hill 410m.

After following the fence line north east, I continued north east over the open country, keeping to the high ground heading to the far east side of Kidland Forest avoiding any unnecessary climb down. 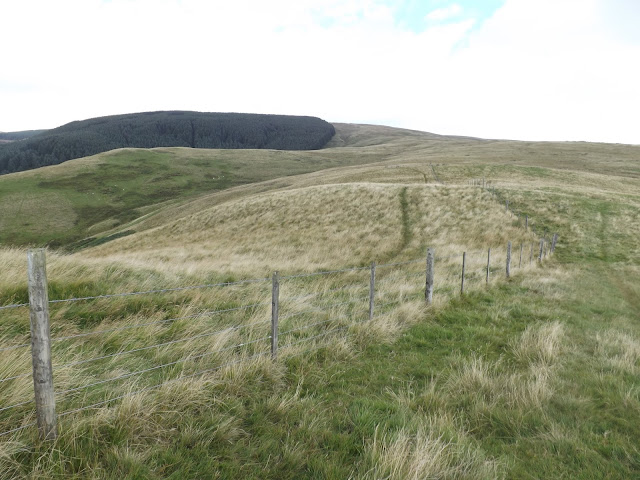 I reached the fence on the south east corner of Kidland Forest and followed this north east again. Crossing the style I headed north passed the cairn up to the trig point on Wether Cairn 563m. 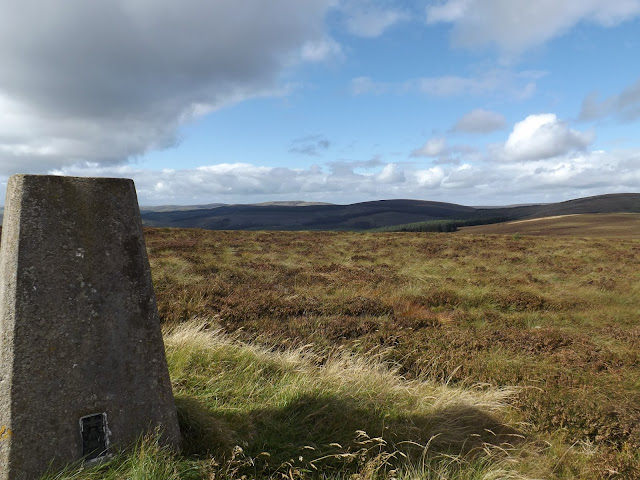 I had a short rest, a drink of tea, quick snack and considered my options,after the late start and the hour having to return to Alwinton. I could have continued with the route but I would not have returned home until it was late, and this would have caused some problems. I thought about going as far as Bloodybush Edge but again I would have been late getting home.  So I decided to return back to Alwinton down the south east side of Kidland Forest. 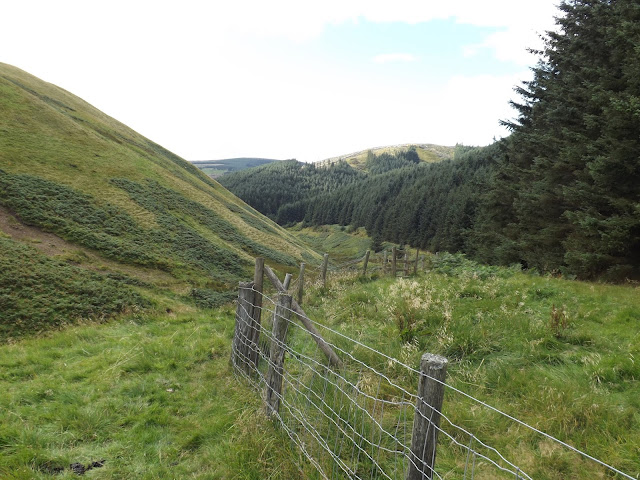 It was warm and sheltered by the forest as I followed the steep fence line down hill. At Cat Cleugh I crossed the style onto a forest path that continued south east along the forests edge. 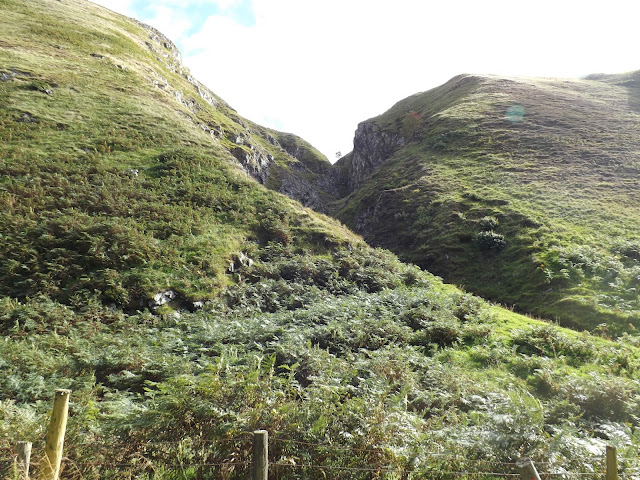 Near the bottom of the Allerhope Burn, I could see the extent of the wood harvesting. 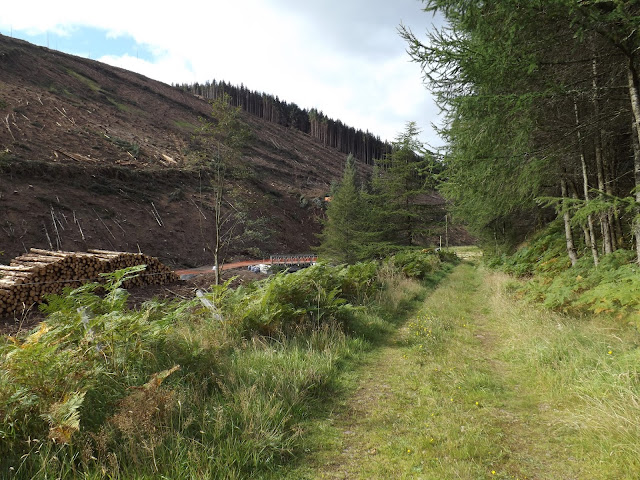 A lot of work had been done in the area including a new bridge. I crossed the bridge and turned south down the forest track. 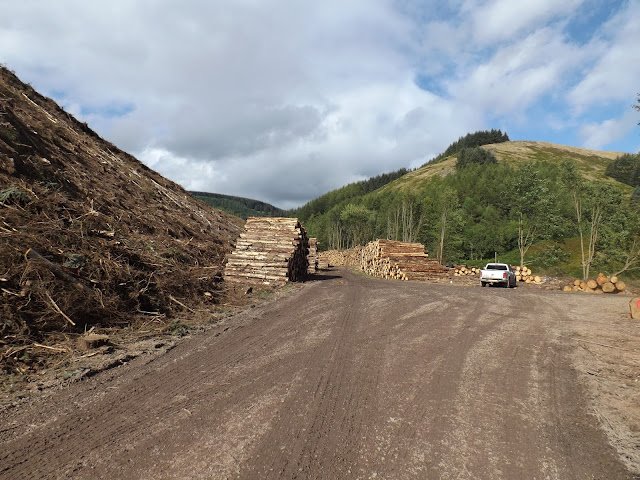 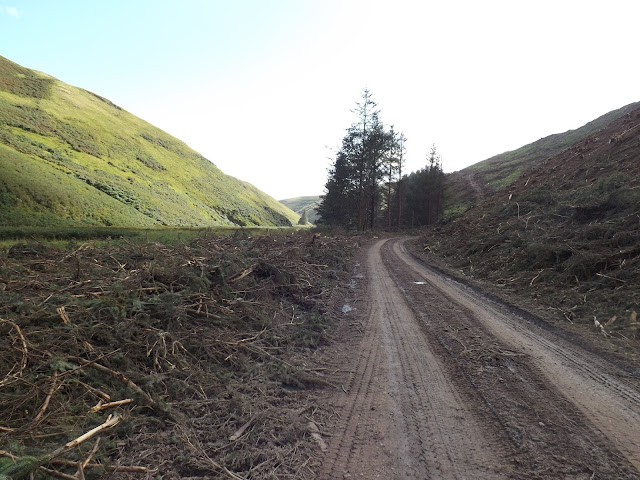 I could have stayed on the forest track which was the same track I had been on earlier and would take me back to the bottom of The Dodd then onto Clennell. Instead I decided to cross the style about a 1 km from the footbridge. This would take me onto a grass path that travelled south climbing the east side of a hill. 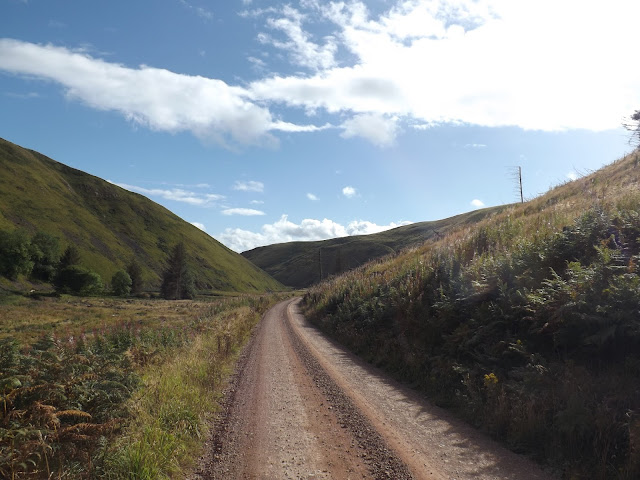 From the track it gave me a view over almost all of the walk up over The Dodd, Puncherton Hill and up to the east side of Kidland Forest. 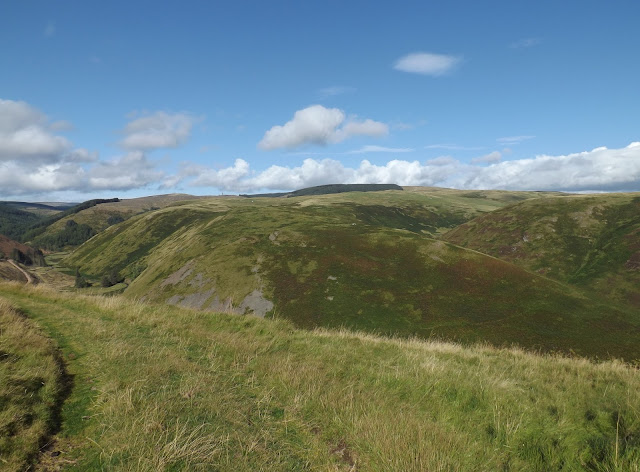 Looking east I could also see over onto the old fort on Camp Knowe, where I had walked below three times today. 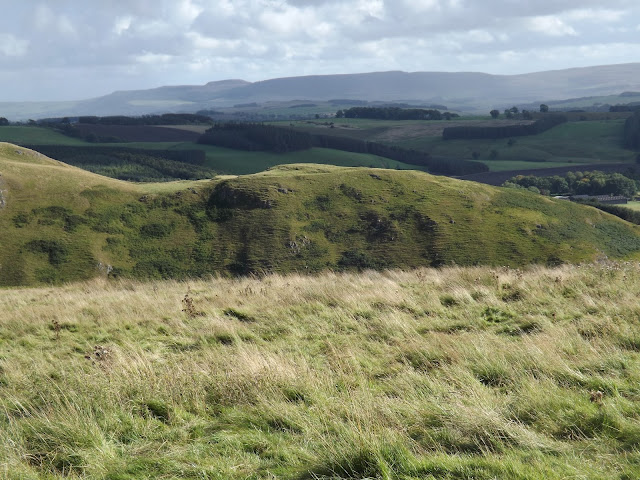 The path joined Clennell Street near an area that showed what looks like to me ancient field furrows, but I may be wrong. 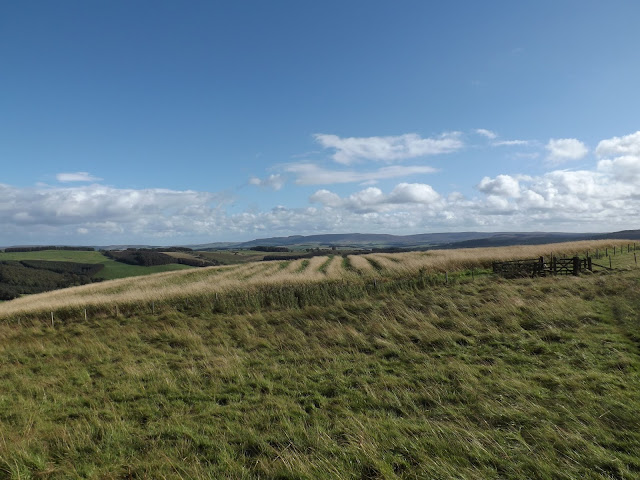 The path then drops gently down to an area shown on the map as Castle Hills. 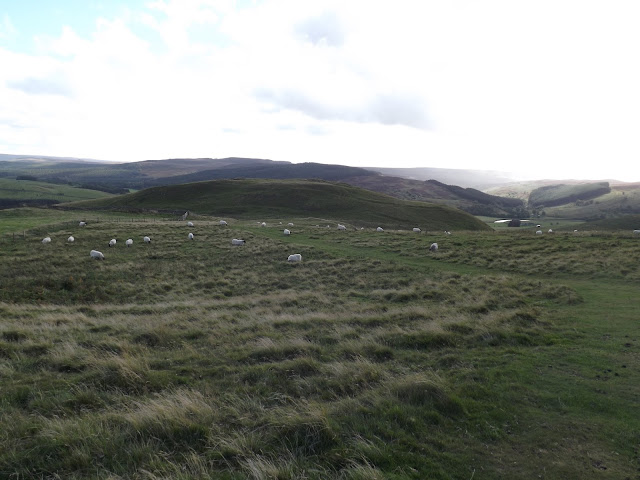 Castle Hills have a very commanding view over the area. 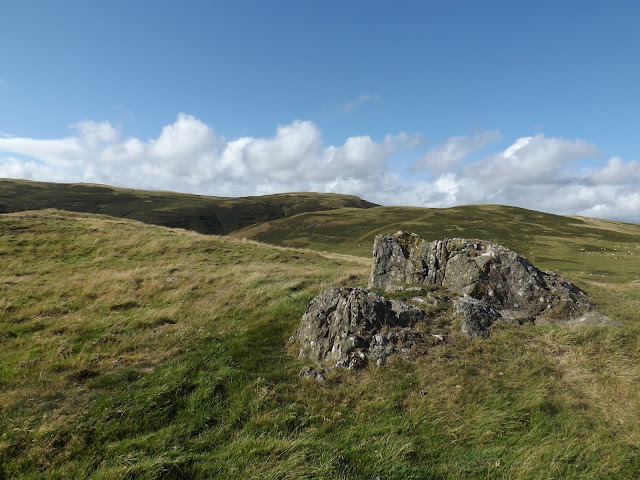 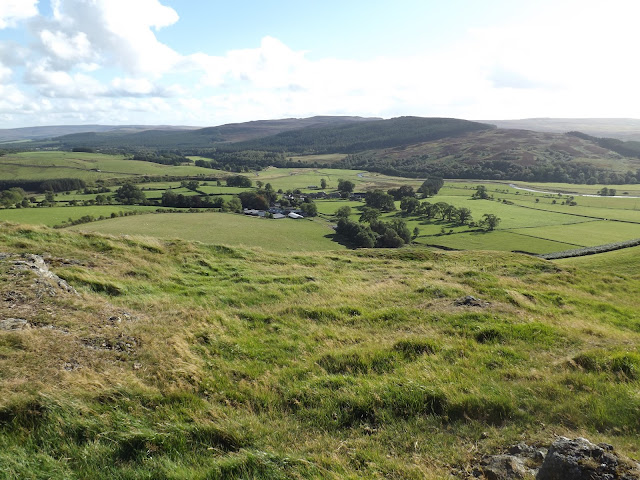 From Castle Hills I turned east and rejoined Clennell Street. 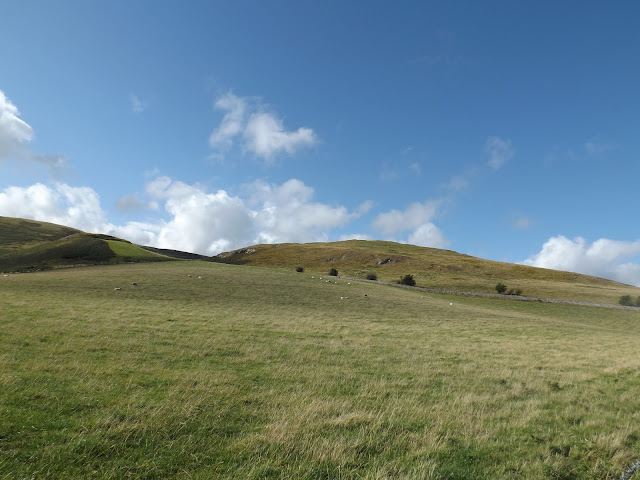 I followed Clennell Street, back to the footbridge at Alwinton where I crossed and returned to my car.  Including my un planned return to Alwinton earlier today I had walked 20km with a 563m climb.  Although still a lovely walk, I will get up earlier another day and come back to do the walk I had planned.