I cannot remember the last time I was walking in Ingram Valley, it seems like a long time ago.  It also seems a long time since I was last out walking, too long, I am out of practice.

It was raining very heavy when I arrived at the Busby Wood car park 130m.  The ground was soaking with all the rain that had fallen recently.  I was following a route we used to do with the children years ago.  From the car park I took the path West up Brough Law 300m to an old settlement.  I was out of shape and could feel it on the climb.  I can remember when I used to run up and down here with hardly breaking breath.  Today I was going to take my time with plenty of stops to take photos. 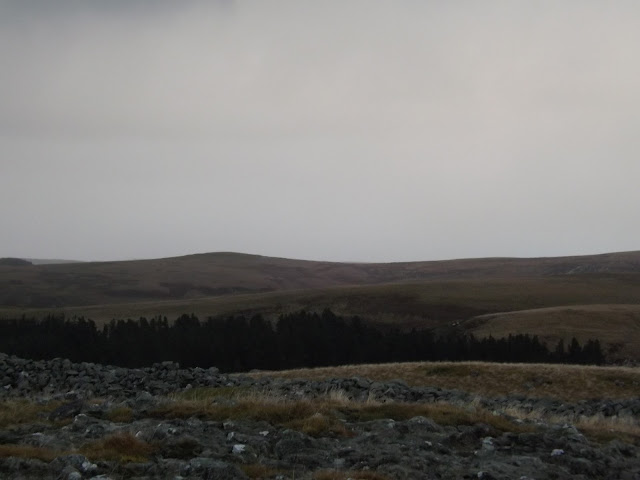 From Brough Law I moved South East across Ewe Hill.  I was heading towards an old settlement shown as a fort on the map.  The ground was very wet with patches of snow and it was slippery in places.

From the fort I moved up and across the side of the hill, West towards Chesters Burn.

Coming across the edge of the hill I moved down towards the burn and found it was very slippery.  At the bottom of the hill, the streams were overflowing and water was finding its own way down hill, running all over the place, and it was deep in some places.  I dithered about trying to find a way across, I should have just went for it.  In the end I just had to go for it anyway, dithering just wasted time.

Through the gate I stood on the bank of the burn, with the rain and all the water lying in the area I expected the burn to be full, and it was.  I had a quick look about to find a way across, was I dithering again?  In the end I just went for it and waded across.  I could feel the force of the water as I crossed, fortunately I had kept my waterproof trousers on so I did not get too wet, not. 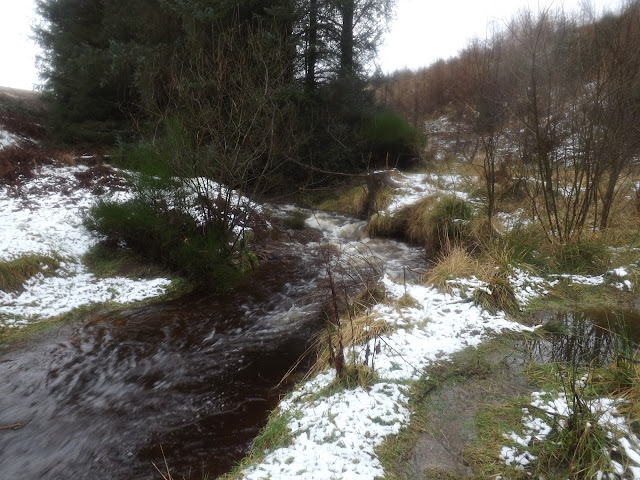 Crossing the burn I headed through what was left of the wood and continued West towards Chesters 270m.  In the past I had always found this ground to be very wet, even when the weather has been very dry.  Today as my feet were now wet it didn't matter and I just splashed through the streams and puddles regardless.

After a quick snack at Chesters I headed up and over the ridge, continuing West.  Going down towards the wood I found the path very slippery.


The path through the wood was clear of snow but due to the water that was in the ground this was also slippery. 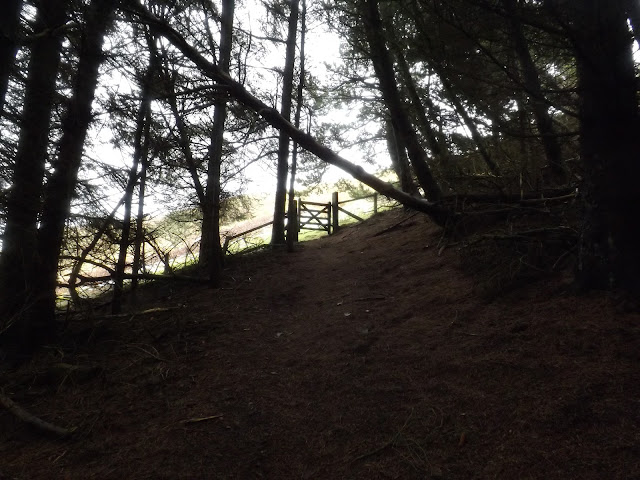 The ground levels off as I moved out of the wood.  However being flat, water collected in many places and the ground was very boggy.  I continued West towards Alnhammoor 210m, crossed the bridge, after a quick look at my map I decided to continue West along the path.


After passing through a gate there was a small drop down to another stream, crossing the stream over a slippery bridge, I started up a steady climb.  The higher up I moved over the Scaud the more snow there was.  After a sandwich and a snack I moved on.  The higher I moved the colder it was getting and the deeper the snow was getting.

As I moved up, the snow was getting deeper, but the views were brilliant.  I reached Shill Moor Cairn 528m.  After a few photos it was time to turn back.

Moving down the hill I found it harder going, as it was very slippery in places.  Walking up hill I could get a better grip on the snow than walking down hill.  I slipped and slide my way down back to the stream, over the slippery foot bridge to Alnhammoor.

From Alnhammoor I decided to stay on the road and head back to Busby Wood car park.

I had walked for approx 6hrs and covered approx 16km with approx 680m climb, I had had an enjoyable day out walking.

Following last week when I came across to the Lakes to check this route with Anne, I was now back in the Lakes doing much the same route again.  Today I was walking with a group of friends and we arrived at the Ambleside youth hostel 50m at about 08.30 am.  The weather was very misty compared with the weather last weekend.

After sorting out our kit and getting ready for the walk we had a quick map check and discussion as to who was going to do the map reading before we set off at about 09.00 am, with Lesley leading the route. 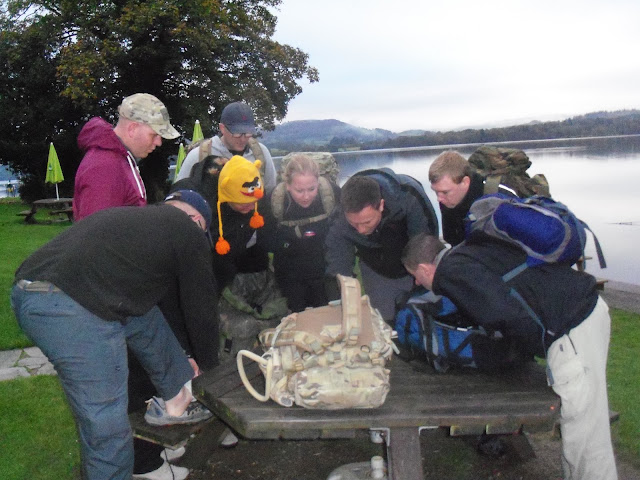 From the youth hostel we moved North through the town where Our Kid and Our Lad stopped for caramel doughnuts and other supplies from Greggs.  Lesley lead us up the track towards Rydal Park, using Ritchie's map which was 1:25,000.  A 1:25,000 map shows more detail than my 1:50,000 so you could actually see that the park was up a track on the right of the A591.

Just past the houses in Ambleside we turned right and followed the track through the park and passed a number of camping huts, this took us to a place just before Rydal Hall.  At a bridge we could see an old building that had been built just for people to go in and look back up at the waterfall towards the bridge. 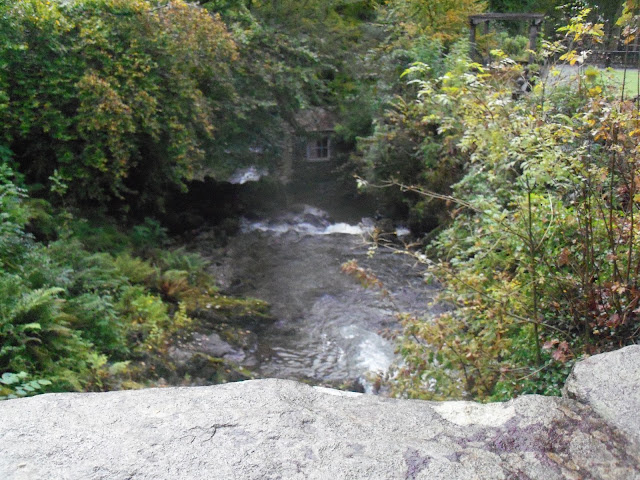 After passing the Hall we followed the track to a junction where we turned right and headed up the track up the hill.  Walking up the hill before we turned left up the footpath the postie came past.  It was now Dodsy's turn with the map reading and he lead us up the hill and being a young jack in the box he was away.  We turned up the footpath towards Nab Scar.  As we walked up we passed a man running down with his dog.  By the time we reach the style he and his dog had ran up and down and passed us three times.  At the style we had a quick rest and to took off any warm clothing.  Although still misty it was getting warm. 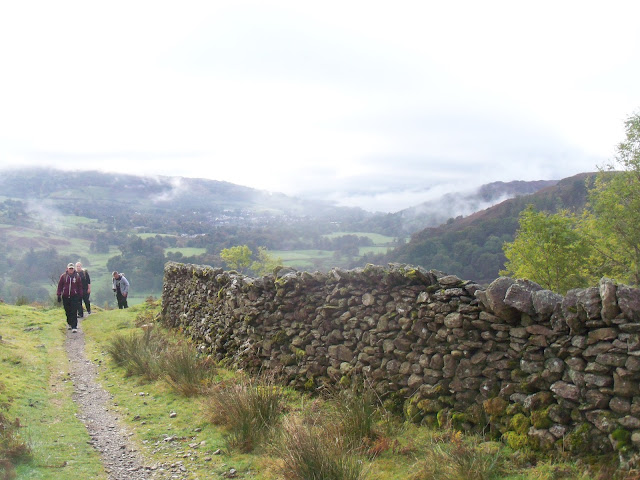 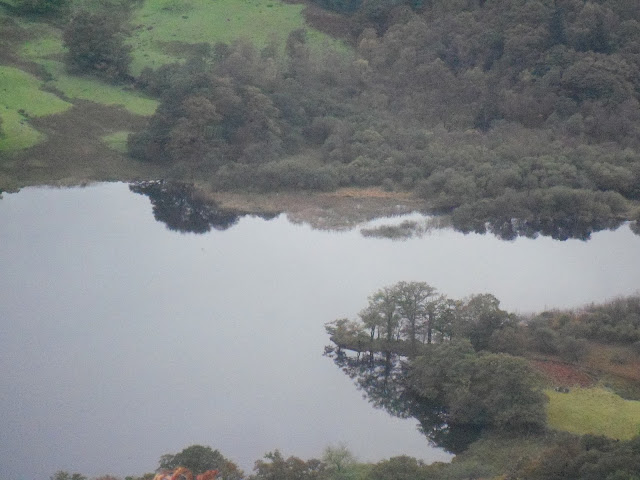 Once on Nab Scar we headed North towards Heron Pike. 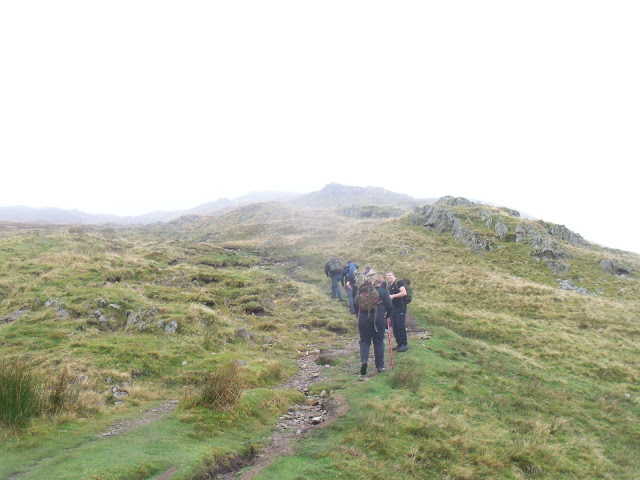 It was still misty when we reached Heron Pike 612m.  From Heron Pike Boydie took control of the map. 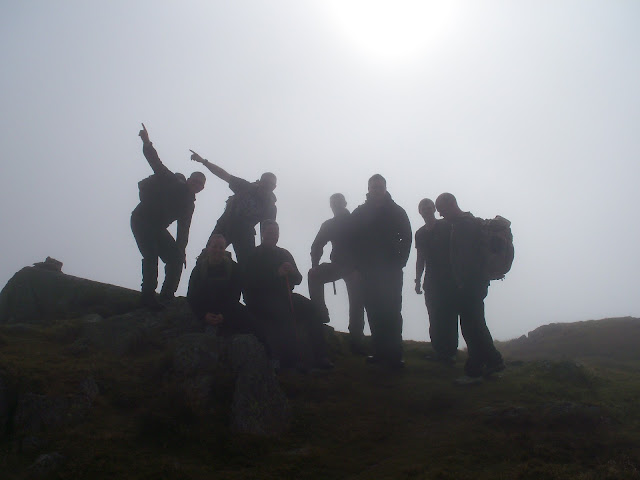 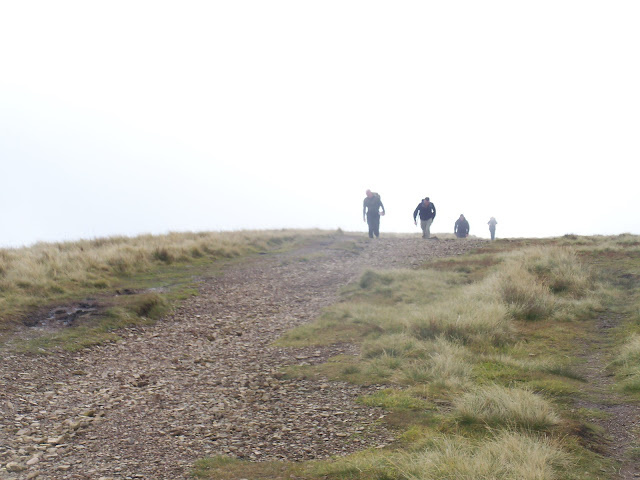 As we moved up we were passed by other groups but the point of the day was to stay together and enjoy the walk.  Throughout the day we had enjoyable chats about all sorts of things such as banana skins, Ritchie shared with us information on the enclosure law as to why walls were built in some of the most difficult places.  As well as the use of moss, the ice age glaciers, all very interesting.  As we started up Fairfield we had a few splashes of rain and everyone put on waterproof jackets and hats.  The mist was thick and spoiled any views we might have had. 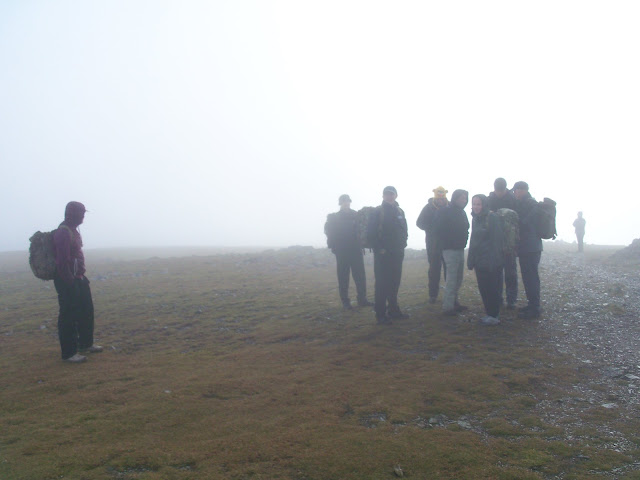 Just before Faifield at approx 850m, we turned right, East over the top Rydal Head. Then started down towards Hart Crag.  Last week from the start we could see all around our route with the clear sky's.  Today was very different where at some points we were lucky if we could a 100m, sometimes it was down to 50m. 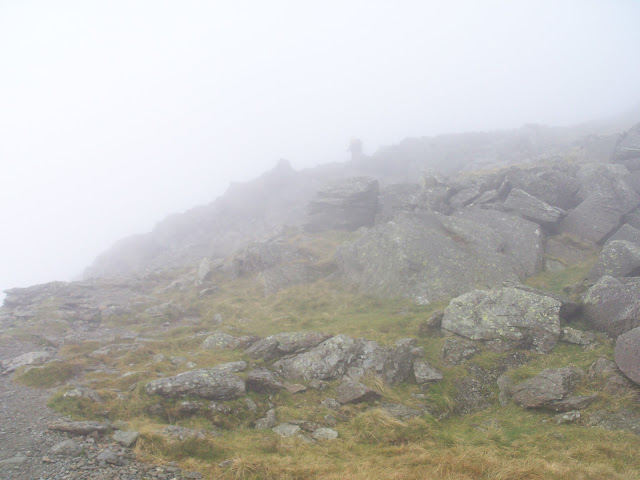 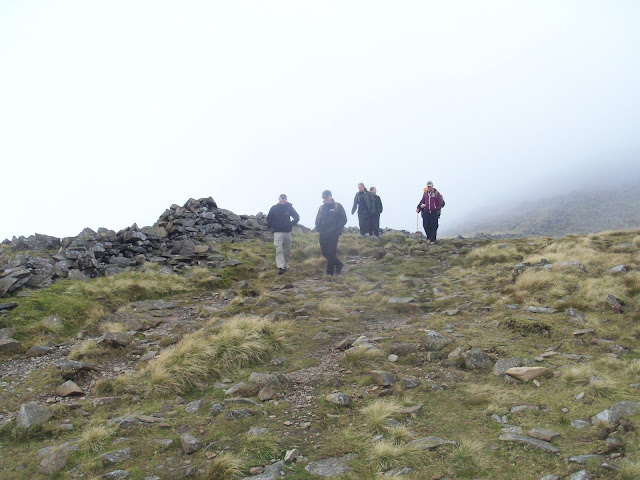 As we started South it started to clear and we only had the odd mist patch.  In parts I think it was more low cloud than mist. 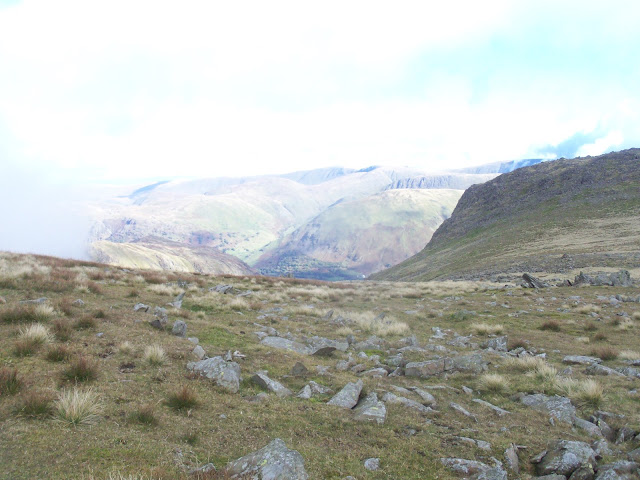 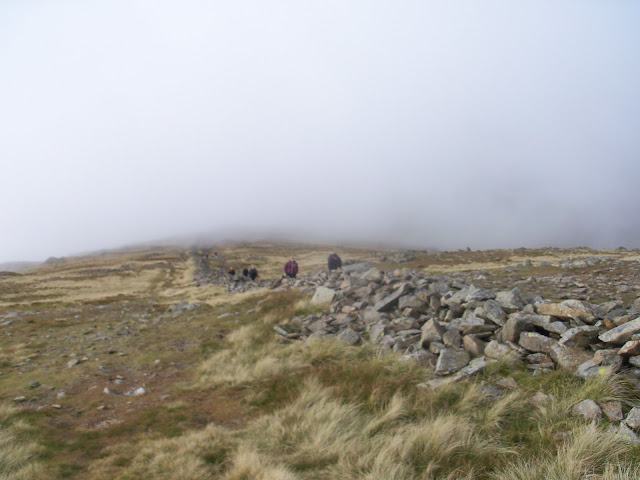 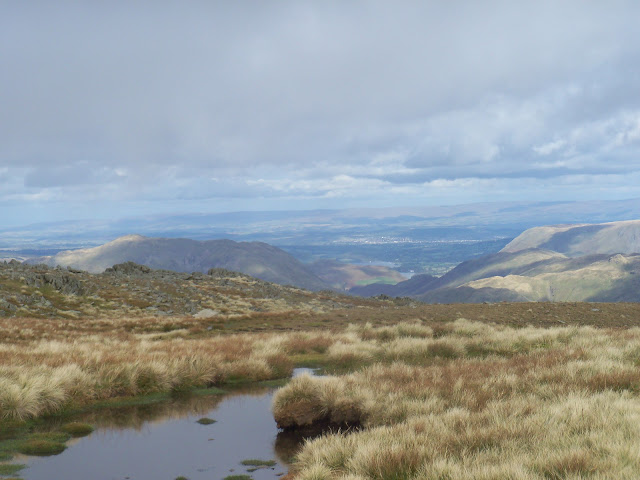 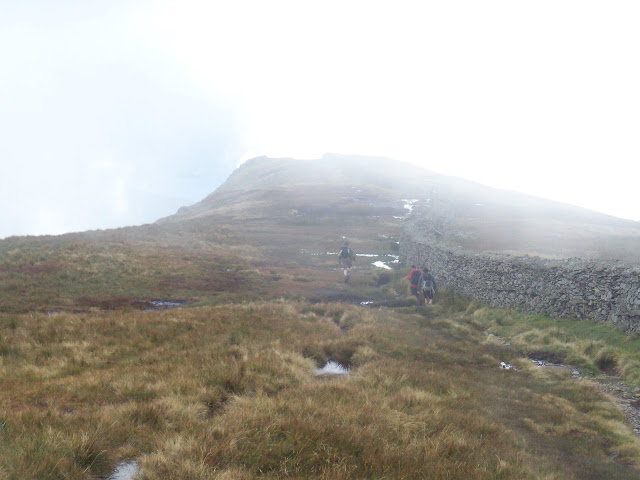 Ritchie knows a lot of places in the Lakes, many of the different routes and lots of information about the Lakes, as he spends a lot of time walking in the area. 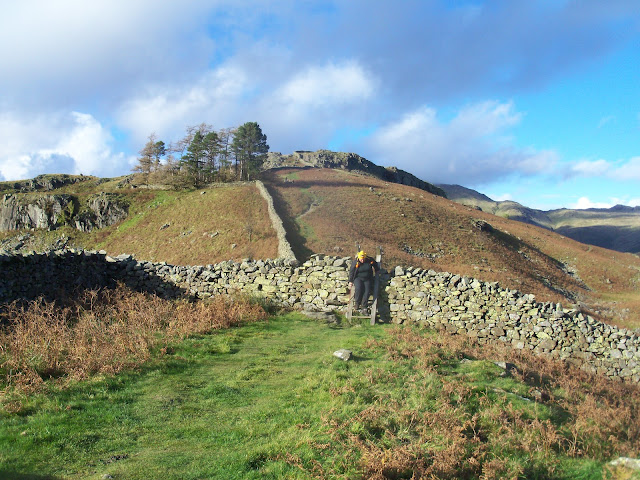 When we came off the hill we found our way to a couple of liquid stops on the way through the town on the way back to the youth hostel.

Some other groups commented on how long it had taken us.  As a group we had started with nine people and we stayed as a group of nine and I would like to think we all enjoyed the walk and each others company.  We had had plenty of time to stop and enjoy the views, when we could see.  Plenty of talking and a relaxed walk.  There was no time limit to finish the walk and as the day moved on the sky cleared and the views were stunning.

I thought it was all very enjoyable.

The letter describing the walk stated that it was 13km.  However the Track magazine Sept 2010 edition shows the same route as the Fairfield Horseshoe with a distance of 19km from the centre of Ambleside.  We started at the youth hostel which was a good 500m from the centre of the town I calculated that all in we had covered at least 20km with a bit of a climb up and down, approx 800m.