Hello, to anyone who may be interested in this


I enjoy walking and I have done a number of short walks over the years, but in the last few years (starting 2009) I have started planning and going out on longer walks by myself.  The satisfaction I get from this is amazing, I only wish I had started earlier.

After each of my long walks, family and friends have said I should write about my walks and share them with people on a blog.  I am not sure if anyone would get any pleasure from my ramblings about my ramblings, but I have started to write some of them down.  I should say I am not an expert or that I have done anything amazing and if you are looking for specialist knowledge then this is probably not the place for you but some of the photos are good.  Well I think so anyway. All of the routes are correct at the time of writing and I cannot take responsibility for any changes.

I will add more as and when I get the time

Today was our last full day in Austria and Klaus had planned us a really good walk.  He had even been out the day before to check out the route.  I must say we had had a brilliant holiday and a lot of it was due to Klaus, Veronika and all the staff at the Hotel Edelweiss.  Everyone at the Hotel Edelweiss was friendly, helpful and made us feel at home.

So after our breakfast, we prepared our packed lunches, changed into our walking clothes and Klaus showed me on the map the route he had found for us.  We caught the 09.44 bus from the stop at the bottom of the Hahnenkamm for Aschau.

From Aschau 1006m we headed South on route 19. Klaus had said it would take us about 20 minutes to walk up Oberer-Grund-Ache, it took us about 30.  This was the route we had walked down on Saturday. 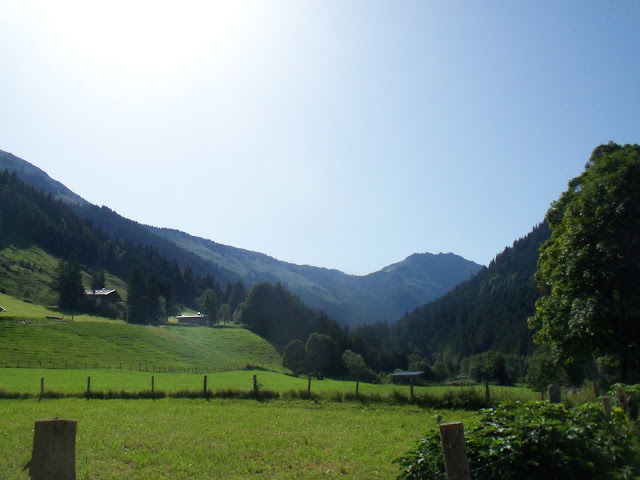 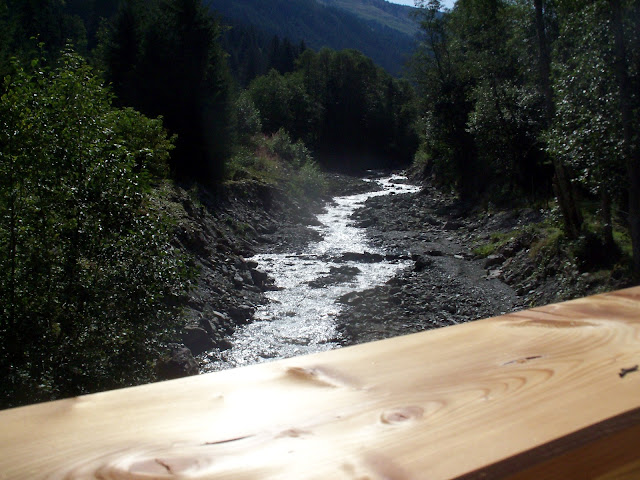 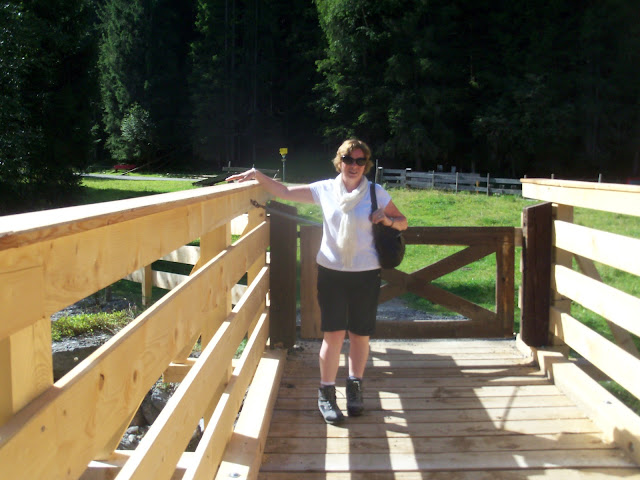 After the 30 minutes walking we found the sign for Hirzeggalm, on the right, West, on route 20, Klaus had told us to look out for this sign.  He had suggested this route as it would be sheltered from the sun.  We had seen many people walking or cycling on the Oberer-Grund-Ache, but on route 20 we only saw one person and he soon passed us. 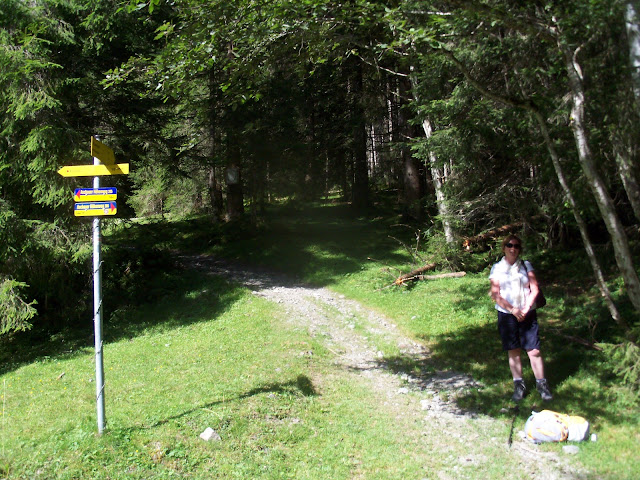 It was a twisty windy path up the hill with a few little steep climbs and it was clearly marked.  The main direction was West, with plenty of shade. 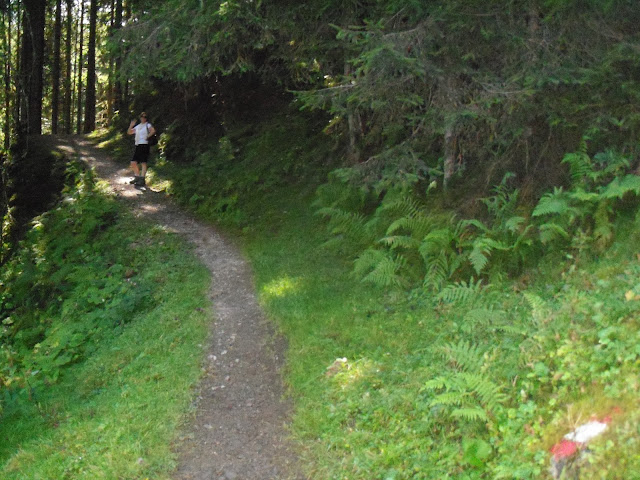 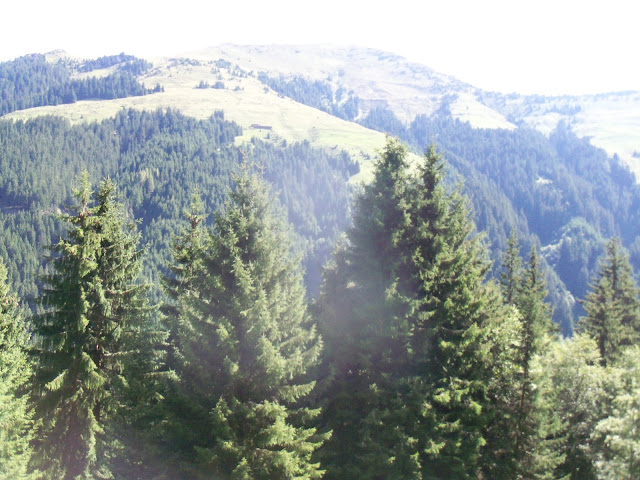 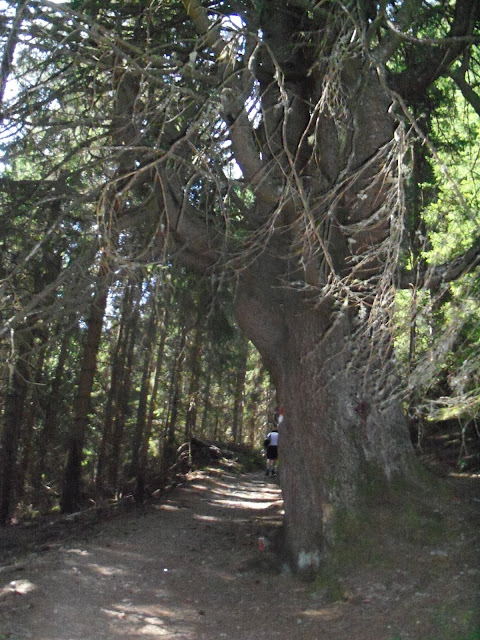 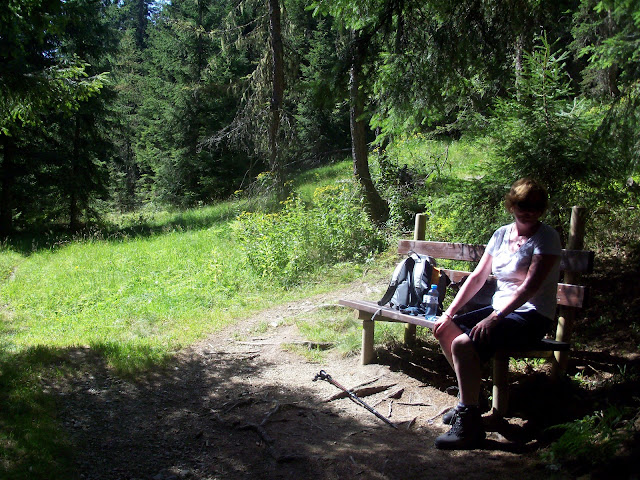 The path then opened up, levelled out and became flat as it reached Hirzeggalm 1600m.  Klaus had suggested Anne stop here with her book, enjoy the view and have a drink.  While I moved further up the hill. 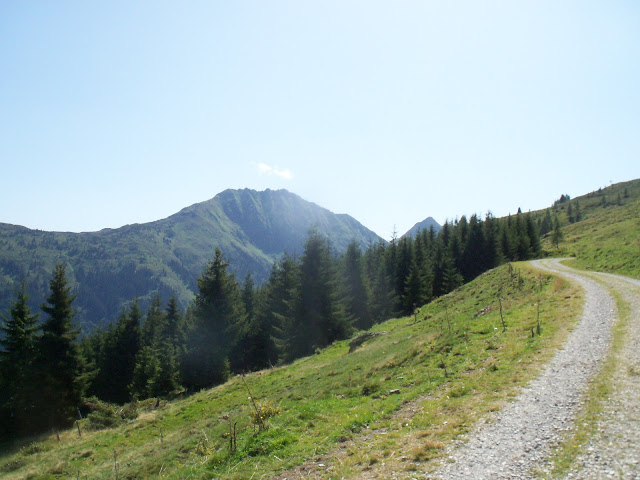 Moving up towards Spiessnagel I was now out in the open and could feel the full heat of the sun.  I was heading South again.  A sign said it would take 50 minutes to reach the top, but Klaus had said it would not take that long, and it did not. 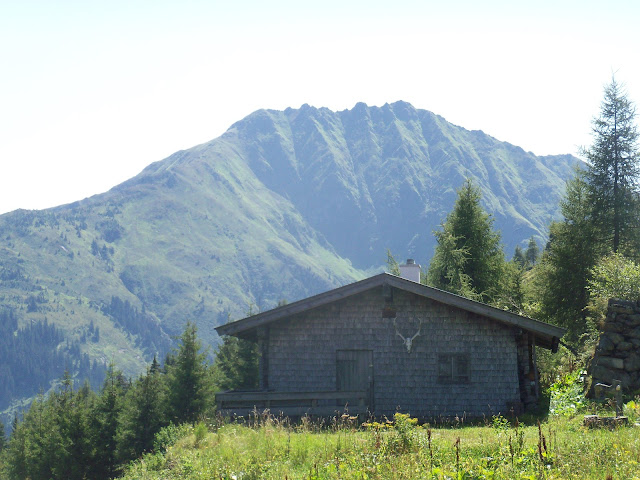 After the road the track becomes narrow and climbs higher.  I soon saw the walker that had passed us earlier in the day, it did not take me long to catch and pass him. 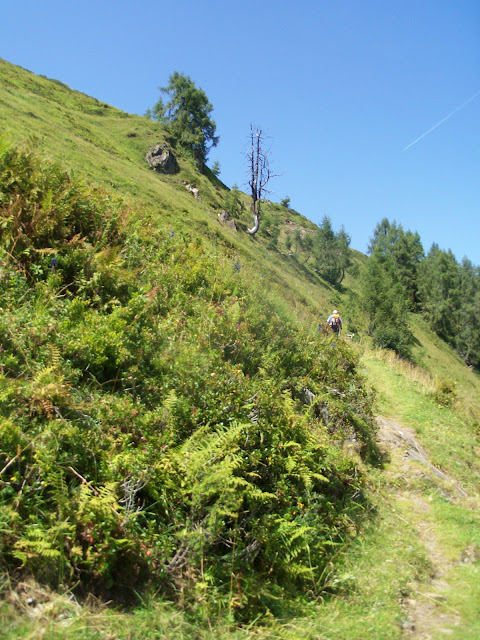 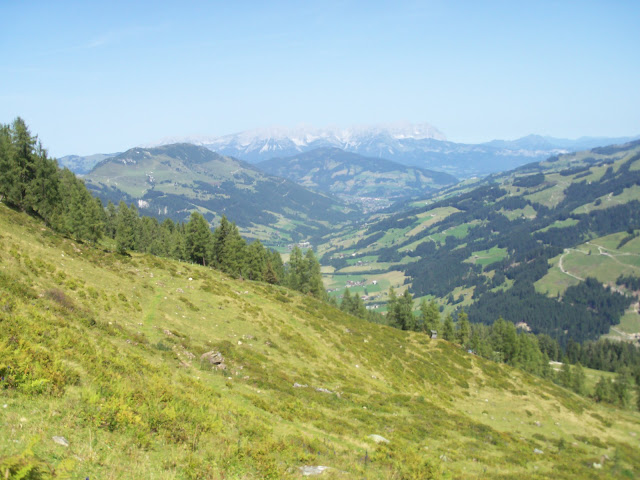 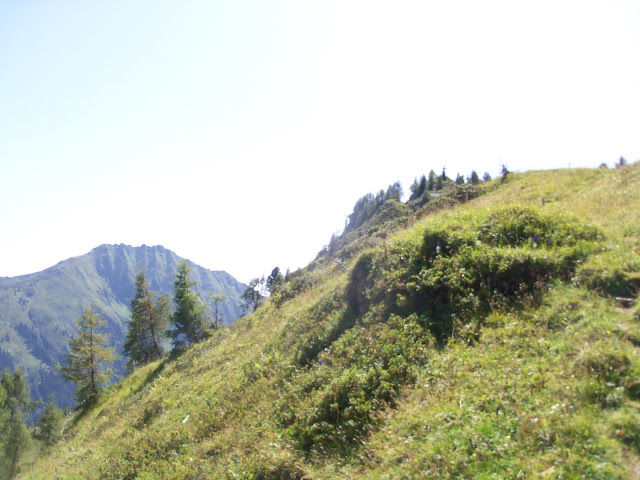 At the top Klaus had said there was a book for me to write in before heading back down to collect Anne.  The views from the top were stunning.

So after writing in the book I headed back down the hill.  I was skipping down enjoying the views and I am sure I could hear music.  When I saw someone sitting on a style, we said hello and I carried on skipping by.  It was only when I heard a familiar voice ask where I was going I stopped.  I was totally engrossed in the walk down the hill, I had walked right passed Anne.  Not to worry I was not allowed to forget, Anne even made a point of telling Klaus and everyone in the hotel.  She had found that a lot of noisy kids were jumping about and running around Hirzeggalm and were spoiling the peace so decided to walk a little further up the hill. 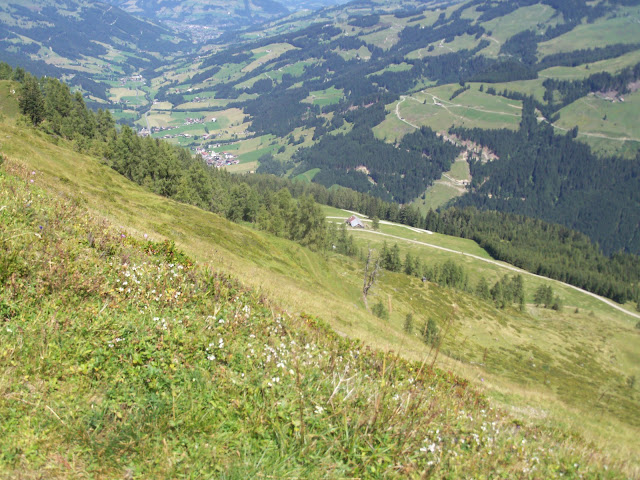 On the way back down we stopped at Hirzeggalm to have a drink.  We had a couple of home made elderberry cordial drinks which were very refreshing and one of the famous Austrian pancake dishes kaiserschmarm.  Anne made the mistake of asking for a couple of spoons, but apparently you use a fork.  Not being greedy we had one between us.  It was delicious and very filling and very home made.  While there we had a chat with the lady, she told us that this was her last summer, she was moving into Aschau.  Photos on the wall showed how deep the snow could get there in the winter, and how cut off they were.  It must have been a hard life to live there.

We walked back down the twisted windy path back to the Oberer-Grund-Ache and then into Aschau just in time for the bus, arriving back at the Hotel Edelweiss for our tea and cakes.

In all it had been a very good walk to finish off our holiday, thanks to Klaus.  We had covered approx 15km, this was the end of our walking in Austria, well for now anyway.

We had talked about doing a long walk today but did not get up in time for the bus.  When we went down to breakfast, at the Hotel Edelweiss, Klaus told us the bus driver had been on the phone and was holding the bus for us.  Secretly I think Anne was pleased we were not doing the walk I had been talking about.  However we had asked Klaus about a good walk for our last full day which would be tomorrow.  So here we were at breakfast again with nothing decided as to where or what we were going to do today.

I cannot remember who, but someone had suggested we walk to St Johann.  We had done this walk last year.  We made our packed lunches, changed into our walking clothes and set off.  Last year we walked down by the train station and followed the road before climbing up a hill to reach the Romerweg (Roman Way).  Which was a busy noisy route, so this year we walked through the town and joined the Romerweg near the bottom of the Kitzbuheler Horn cable car station.  A much more pleasanter route.  The route basically follows the valley North near the river and the train line.  It is on the whole a flat walk with very little climb. 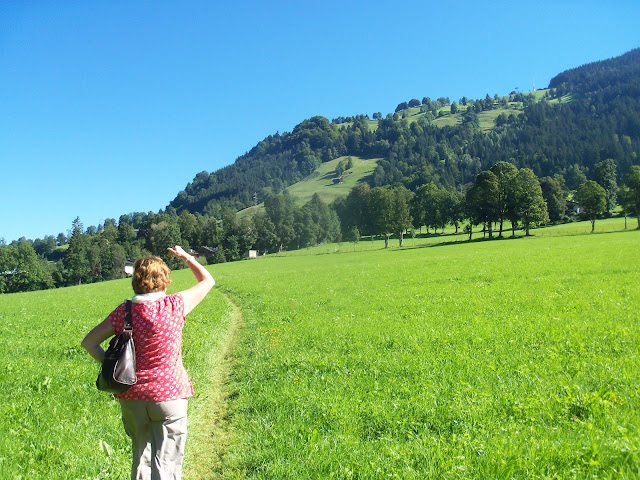 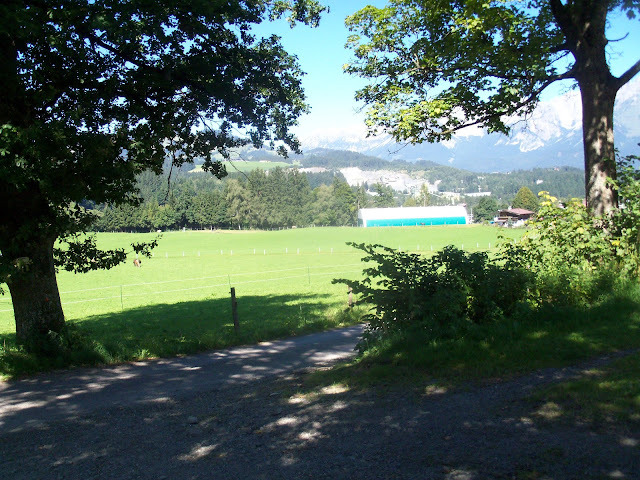 It was very hot so we had a few stops and so sat in the shade and enjoyed the views.  Everywhere we walked in Austria you could hear lawn mowers, electric wood saws, harvesters cutting the grass in the fields. 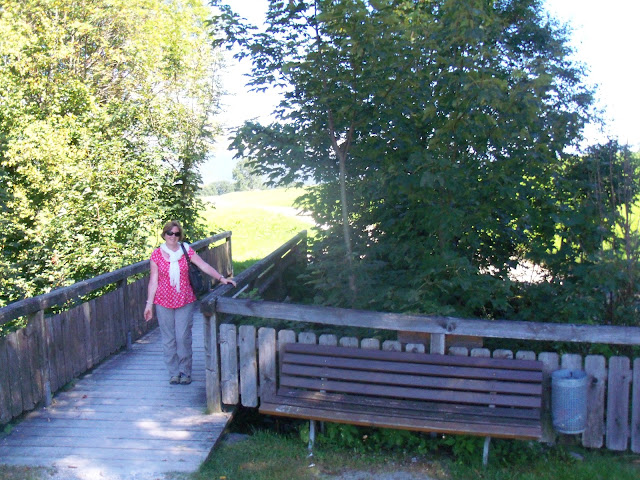 Near Oberndorf is a big factory which you can see for miles.  We found last year when we thought St Johann was going to be near the factory, it is not.  There is still a couple of miles to go.  On this stretch we passed a group of walkers who were walking to St Johann and they were also staying at our hotel the Hotel Edelweiss. 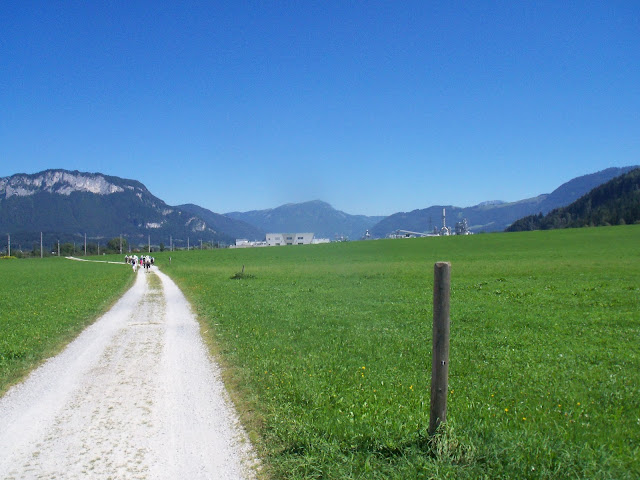 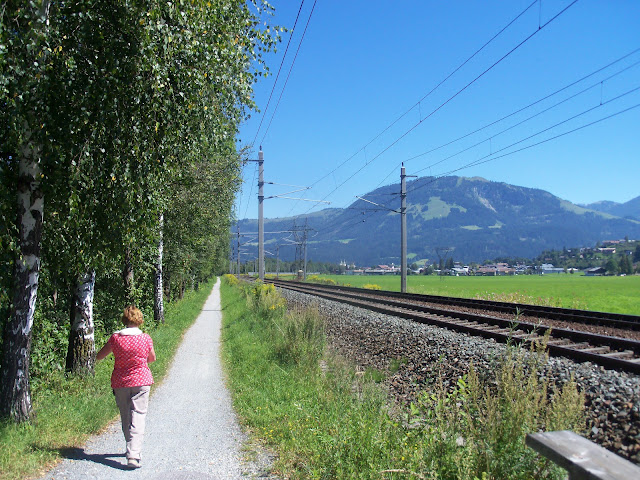 St Johann is another village down the valley.  We had a coffee at one of the open cafes, where it was very hot, even sitting in the shade.  After the coffee we had a little walk around before finding a seat that was in the shade.  There was a cool breeze where we sat and had our packed lunch.  It did not take long to have a further look around the village then we started thinking about going back to Kitzbuhel. 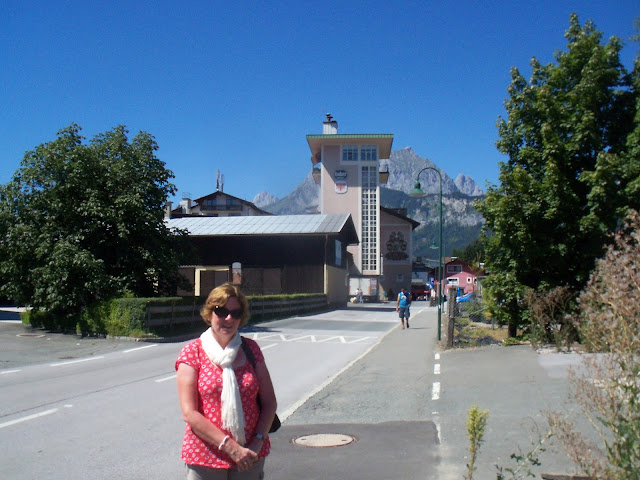 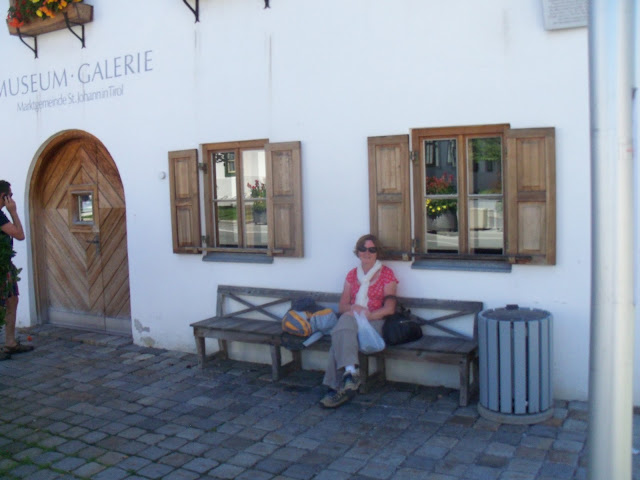 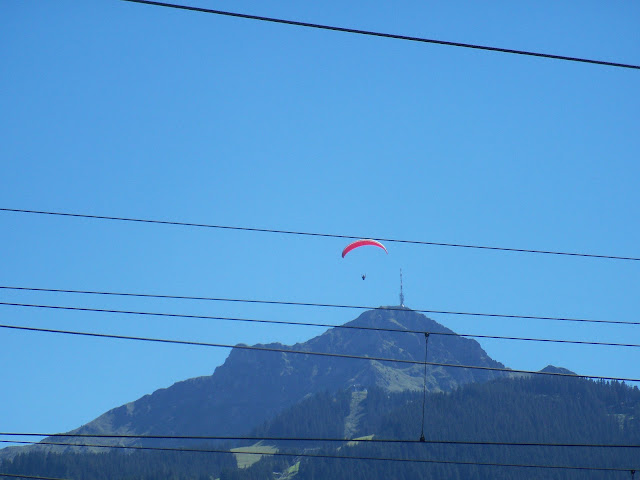 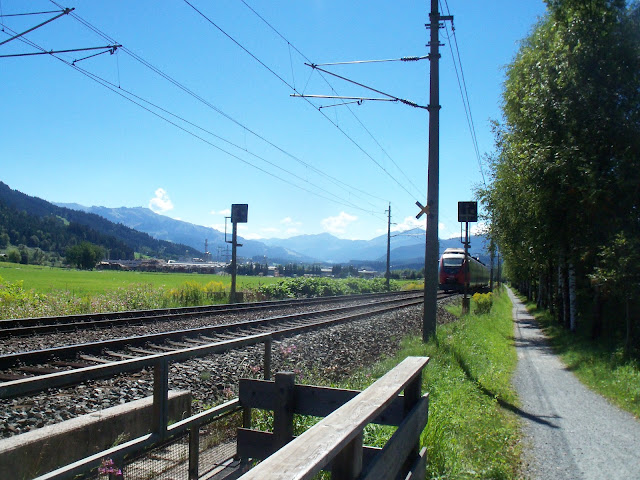 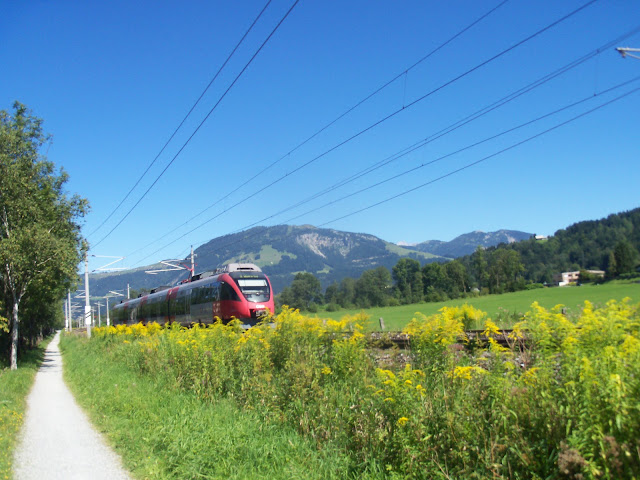 Walking back I passed a couple of groups of walkers who were heading towards Kitzbuhel. 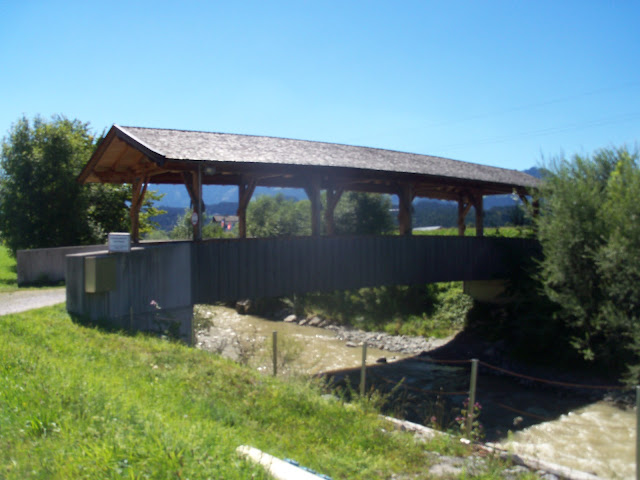 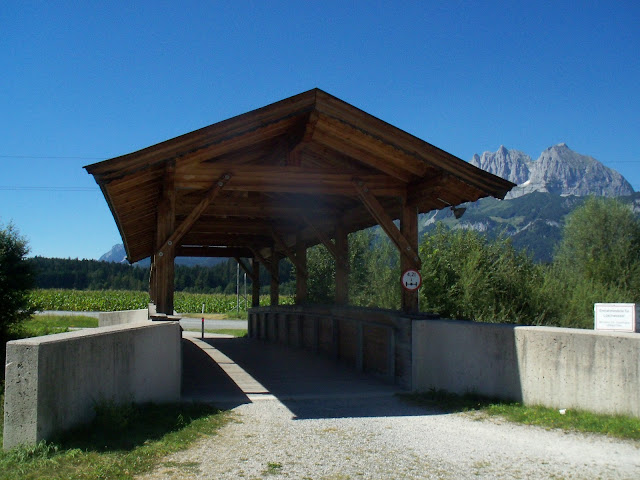 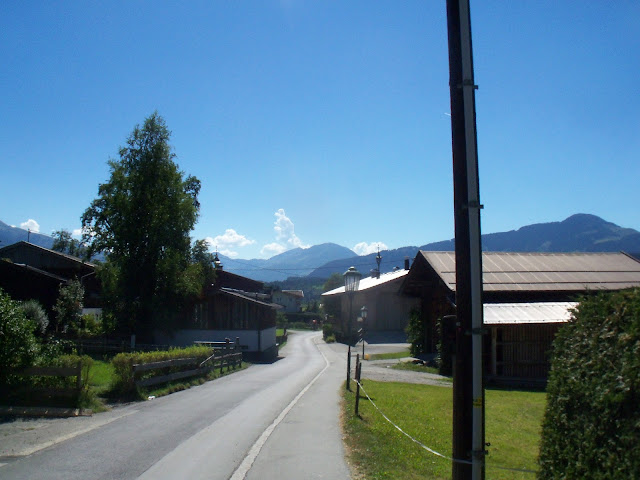 This morning as we passed this field a tractor was cutting the grass, by the time I was walking back it was all bailed up and ready to be stored. 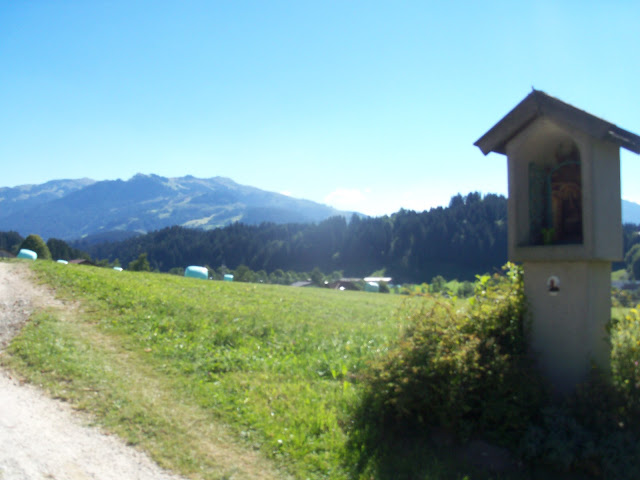 I was soon back at the Hotel Edelweiss, it had been a very hot day, with very little shelter from the sun.

Anyway a few cups of tea and a piece of cake soon sorted that out.  I reckoned I had walked about 21km.