Today started damp and then turned wet, but that was not going to keep us in.  Originally we had no plans on where we were going to go and someone suggested the waterfall or slap as they are called in Slovenia.  So with our heavy waterproof coats we set off.  Leaving the Pension Milka after a well delivered breakfast, we walked passed Zlatorog and back up route 1 the path we had walked down on an earlier walk. 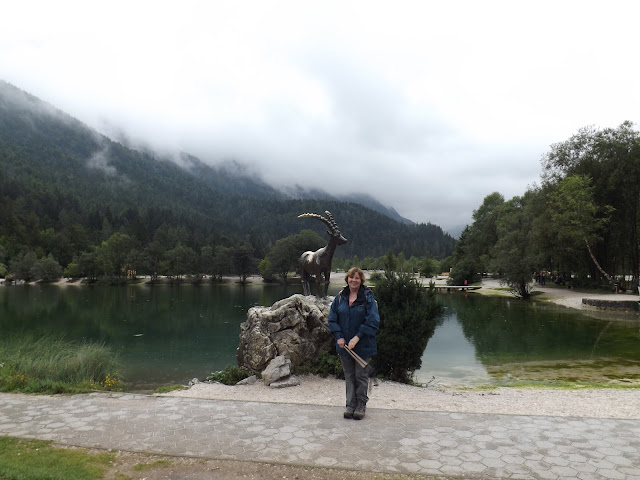 As we walked up, east, the rain was getting heavier and the debate was should we put our waterproof trousers on or not.  We walked up the twisty gravel path, climbing as we went until we reached the narrow forest path that dropped down to a fast flowing stream, and had the posts and steps built into the path, climbing once again out of the re-entrant. 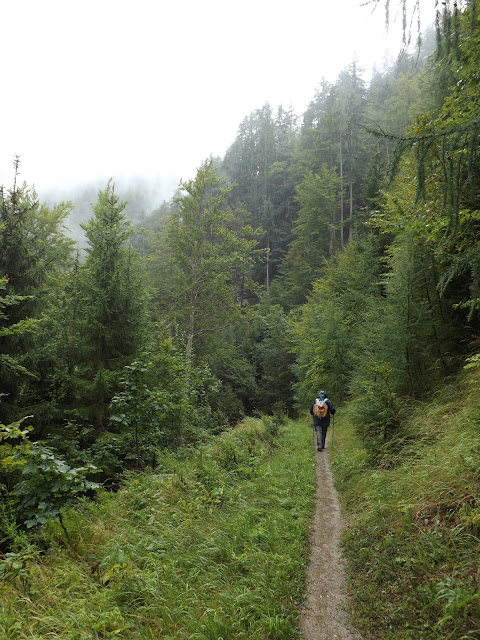 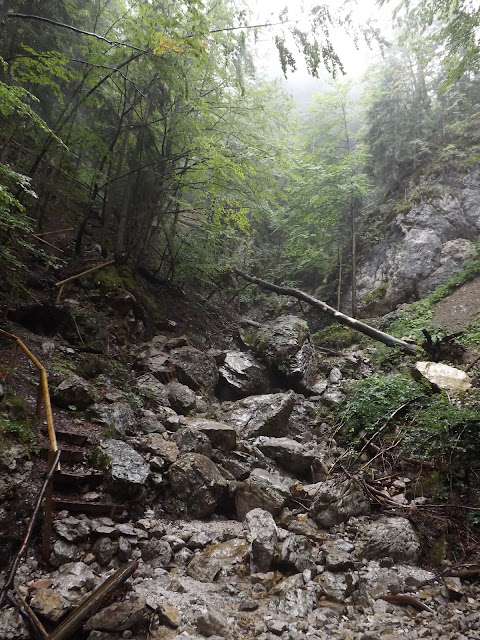 We continued along the narrow path over slippery roots and boulders until we came out the other side onto the wide gravel track.  The rain was constant and there was no let up, although wet we decided to put our waterproof trousers on as it had turned a lot cooler.  Although any view was restricted due to the trees, today any glimpse we may have had was gone.  We continued along the road that followed the 980m 1000m contour line until we reached the top of a major hairpin bend. From here we would follow a path south until it joined route 6. 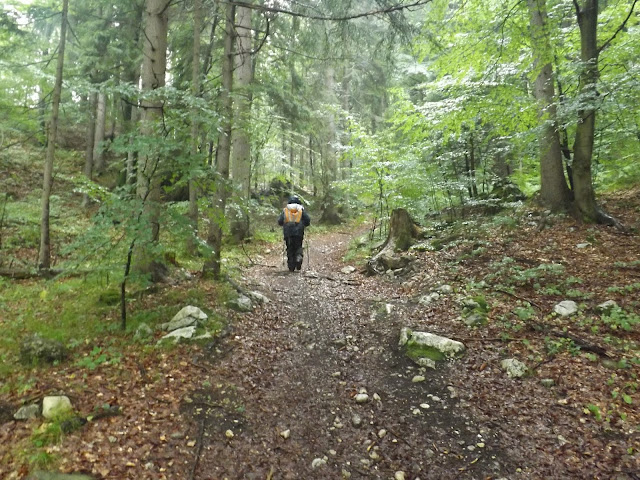 Walking along we saw a sign pointing down hill to the Spodnji Martuljkov slap but we continued up hill towards Brunarica Pri Ingotu an Alpine hut. 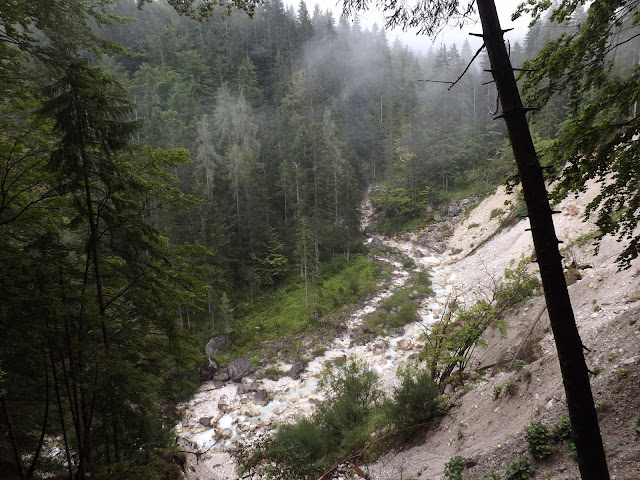 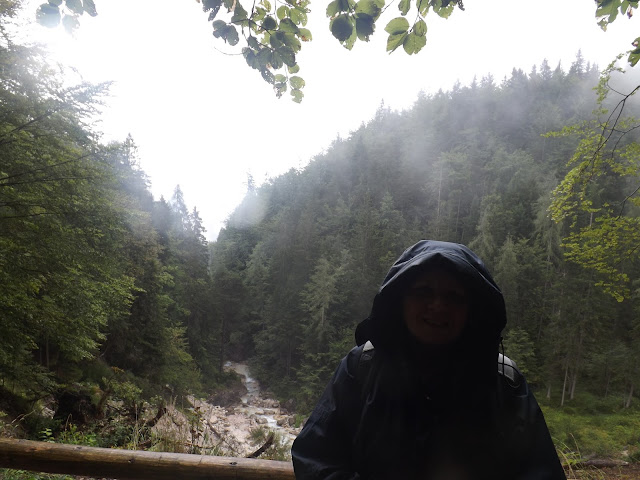 At the hut it was still very misty and the clouds only lifted briefly before covering the view, so again after a beer and a piece of cake we set off down hill back to the junction for the slap. On our way down the rain started easing. 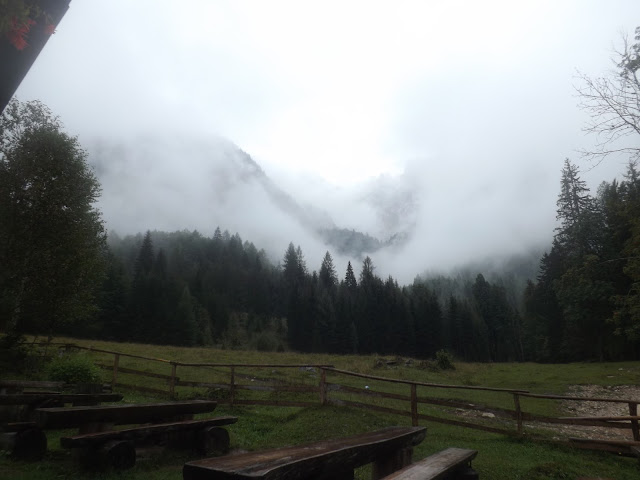 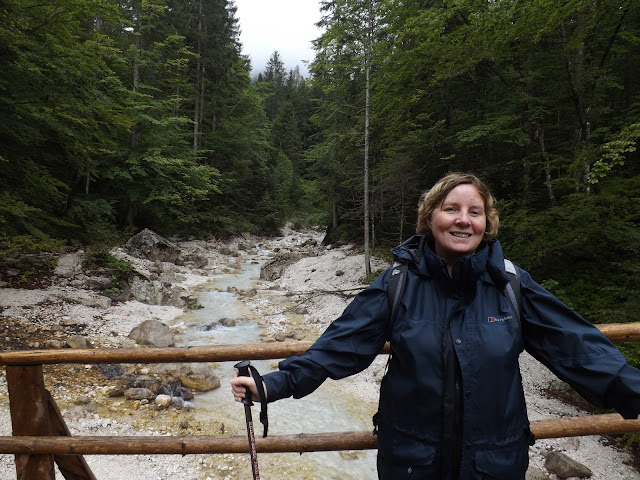 The path down towards the slap started easy enough but soon became very steep and loose stones covered parts of the path.  Anyway we soon reached a very good vantage point of the slap, all the rain would help make this an impressive sight. 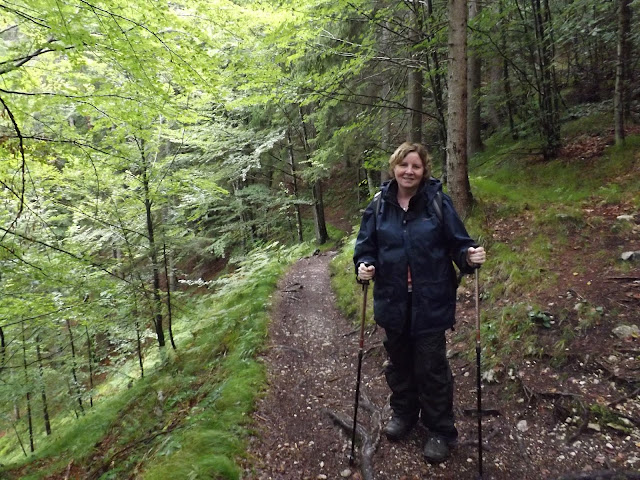 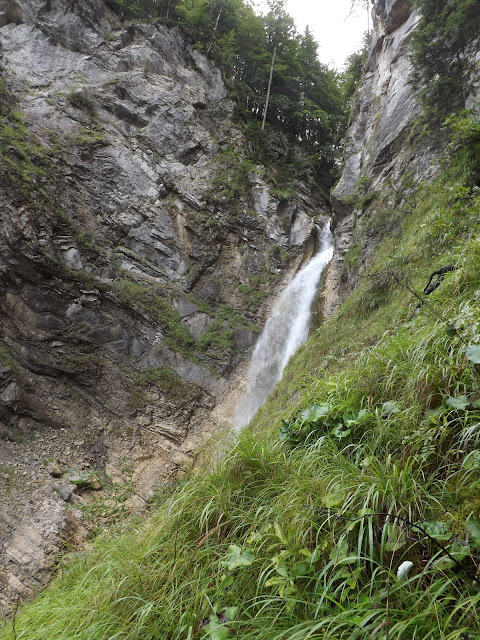 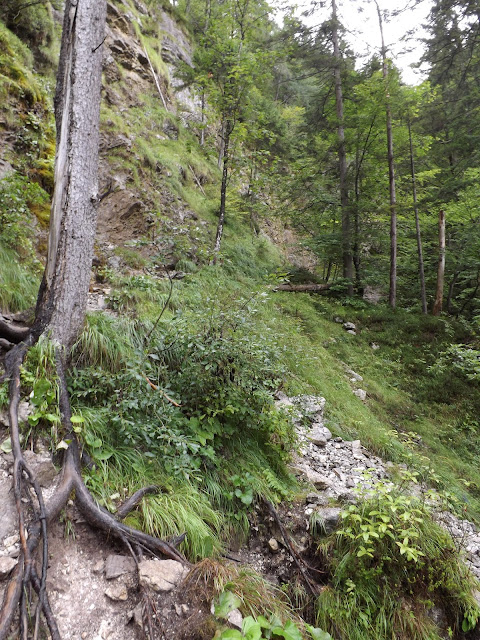 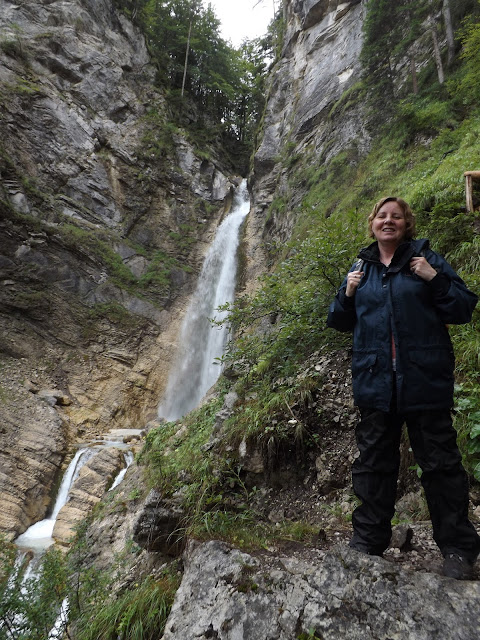 The path leveled off a little and took us down to a new footbridge, you could see what was left of the old bridge at the bottom of the steep gorge. 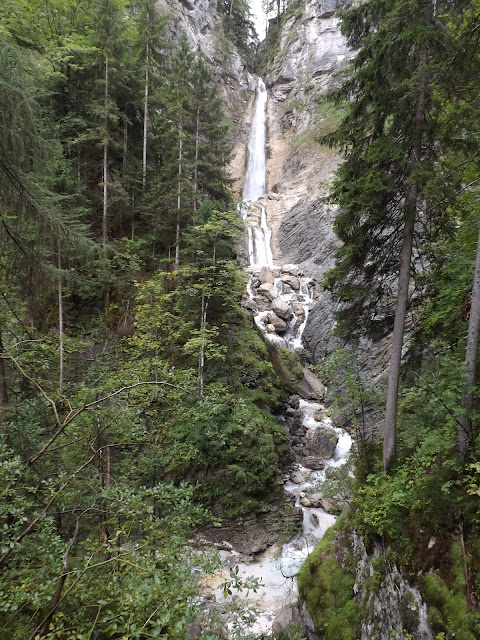 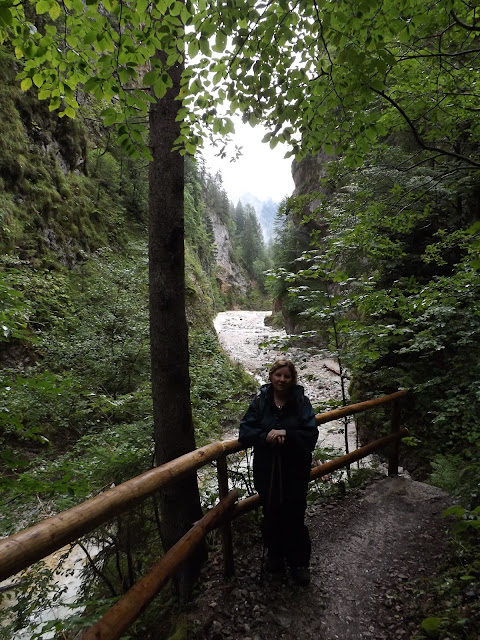 Steps had been placed in places and we soon reached the bottom of the gorge, it was fantastic. 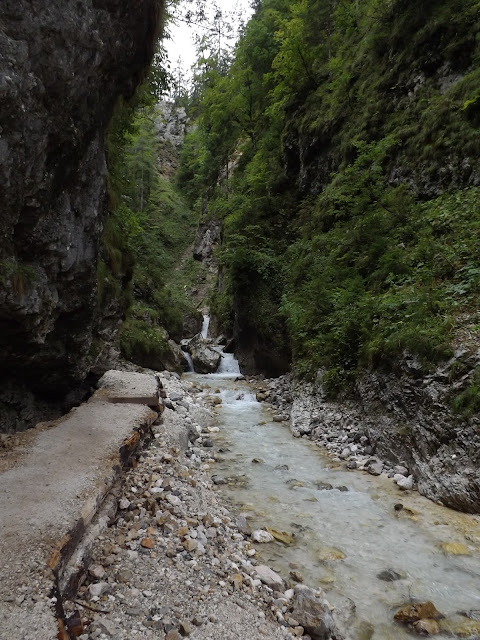 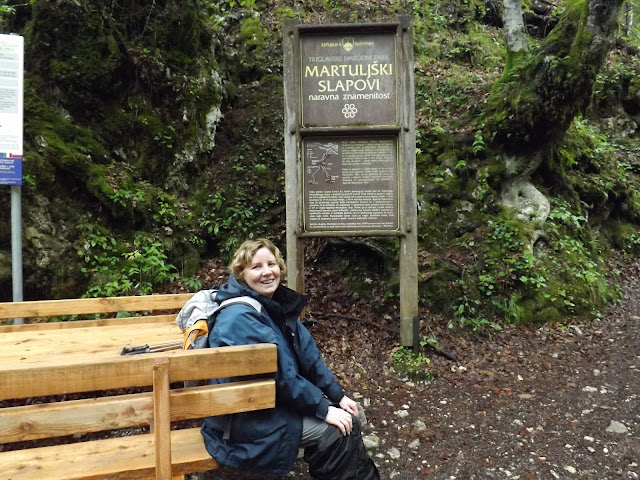 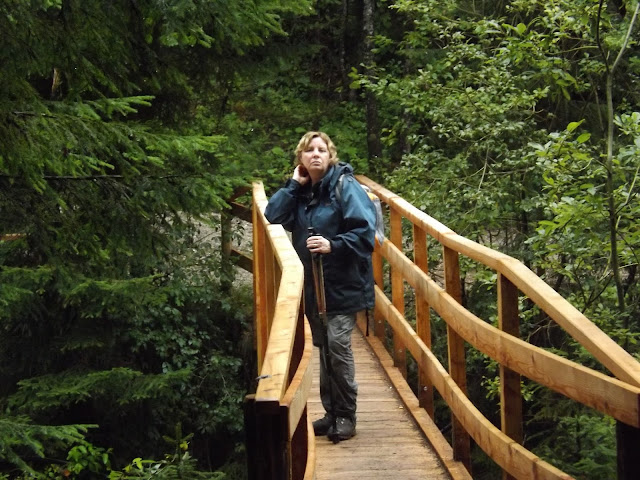 A shot stop to remove our waterproof trousers and we were on the valley bottom walking towards Gozd Martuljek.

We crossed the road and walked by the Sava for a short while before crossing the bridge onto another part of the Alpe Aldria Trail.  On our way we passed a house that had orange coloured growths on the fence posts. Earlier in the week we had a guide on a trip we did who explained these were a natural thing usually placed on posts near the road to keep deer away from the traffic. 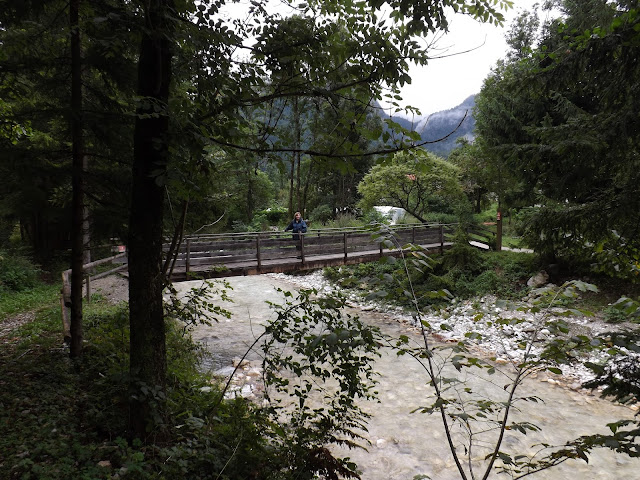 Once over onto the north side of the Sava there was very little climb as we followed the river back up its route to Kranjska Gora. 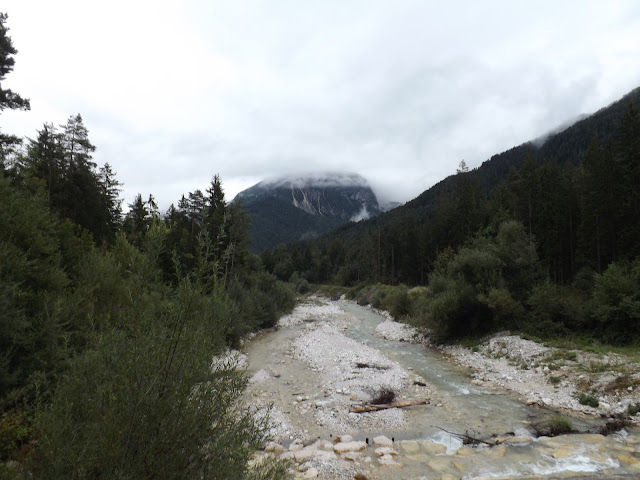 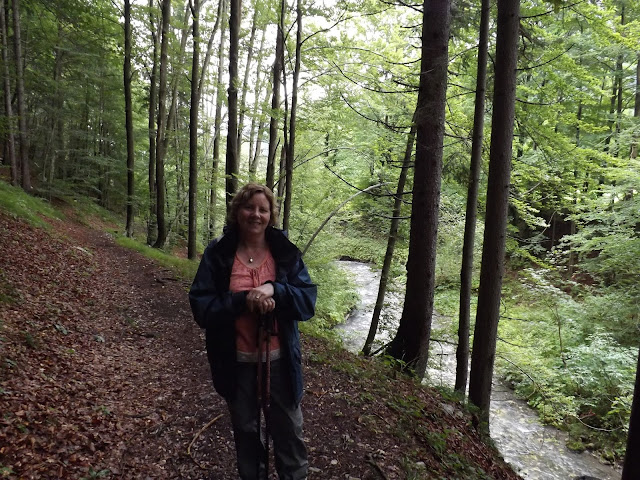 Once in the town we continued through returning back to the Pension Milka for a short rest before a lovely evening meal. We had covered approx 13km with over 340m climb.

Earlier in the week we did a different walk from Jasna to Gozd Martuljek.

Excellent but a very wet day.
More to follow