After a good nights sleep I woke up to find it very misty. 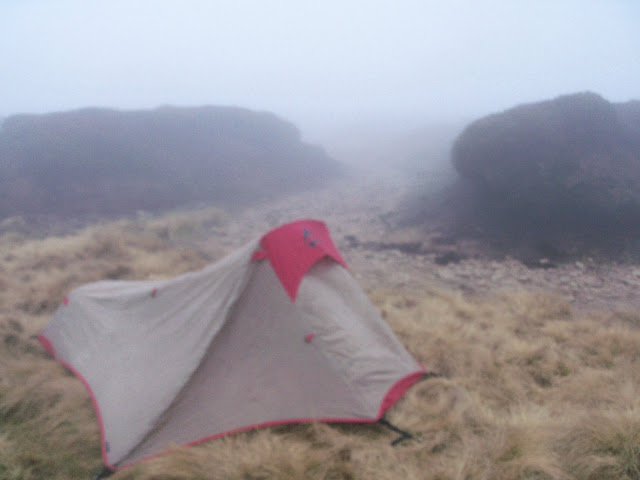 After packing my kit and having a breakfast snack I set off at about 0730.  I was high up and the mist made it difficult to navigate.  Using my compass I was walking on the rough bearing of the direction I needed to be moving in. After about an hour of walking I became disorientated in the mist, fortunately I noticed quite quickly.  Something was telling me I was heading in the wrong direction, somewhere in the mist I had missed the track down to my left.  So I stopped for a short rest, had a drink, checked my map and compass and made a quick evaluation, I got myself back on The Way after about 20 mins. 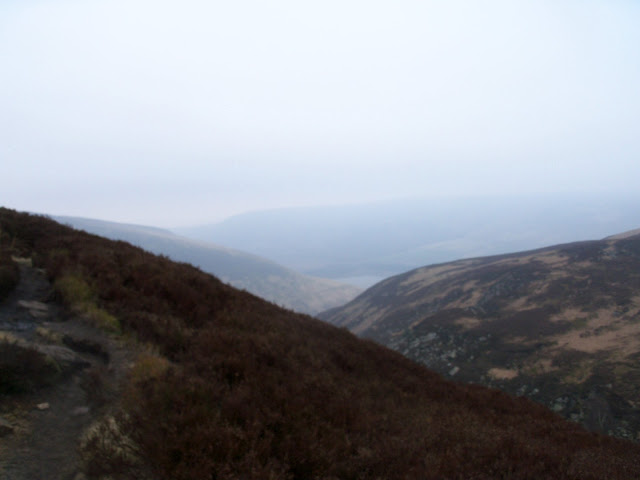 It was very windy, I was high up and the going was slow.  As I moved down on the side of the ridge called Clough Edge I was moving out of the mist the lower I dropped.  I could see Torside Reservoir to my North.  It always fascinates me seeing a feature on my map coming into sight and how it looks as I move near it then eventually pass it.  Anyway as I moved round the edge the wind changed direction and caught the waterproof cover on my pack, I was borrowing from my daughter.  I had it tied to my backpack but not tight enough as the wind caught the cover and nearly had it over the hill, I automatically without thinking sprinted after it with the heavy bag and I was surprised I caught it. 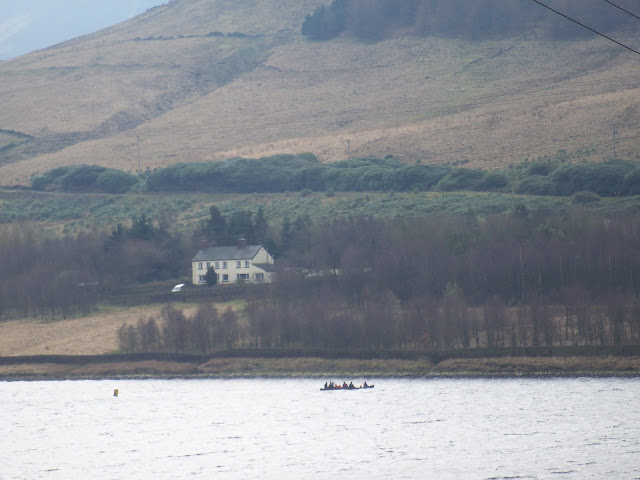 The Way took me down to the dam that crosses the West side of Torside Reservoir where I sat and rang home.  As I spoke to my wife I was watching people rowing boats on the water, it looked too cold to be out on the water.  The Way then follows the northern edge of the reservoir before heading North, just West of Crowden, this was where I stopped, sat in the shelter of a wall and had some cooked food with a hot drink.  I also took my boots off and gave my feet a rub for luck.

I moved Northerly over Laddow Rocks, Roundhill Moss, Dun Hill in a buffeting wind.  Took a photo of the Black Hill trig point for my spot collection and was heading down the hill before I saw the first people I spoke too all day.  I was looking forward to a quick snack at Snoppy's van on the A635.  Snoopy's van was mentioned in my book as well as on a number of websites I had looked at for my research and so I was looking forward to a warm sandwich, I could almost taste the bacon and a nice cup of sweet tea. 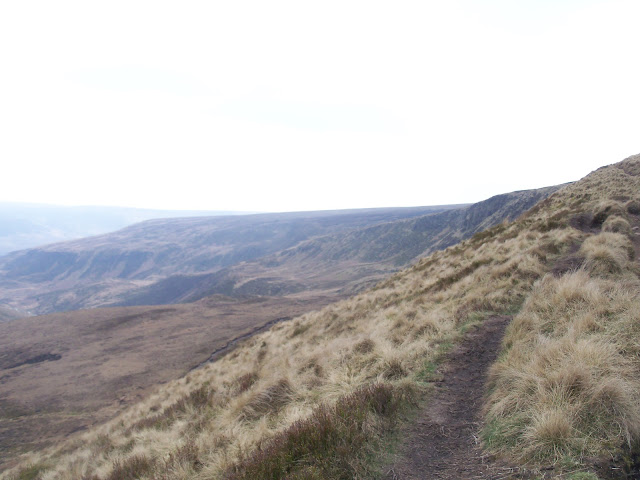 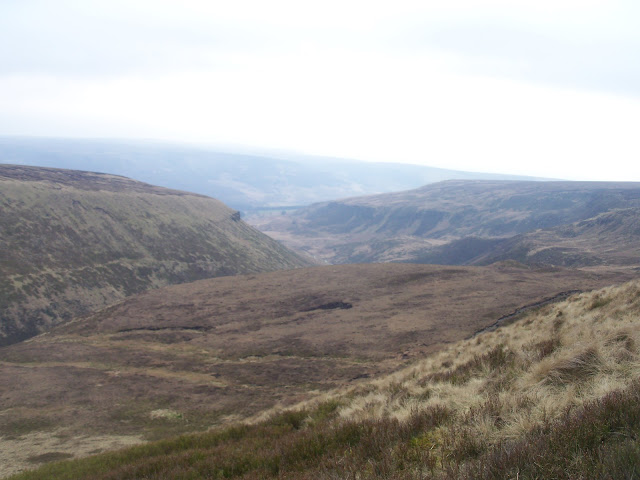 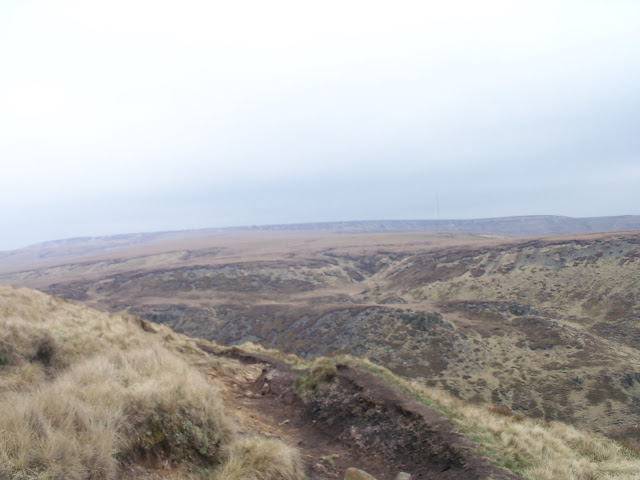 How disappointed was I when I could not see the van.  To add insult to injury there was a sign on the side of the road saying that in the past this had been the site of a cafe where people had travelled for miles for ham and eggs. After a short disappointing stop I picked myself up and headed on. 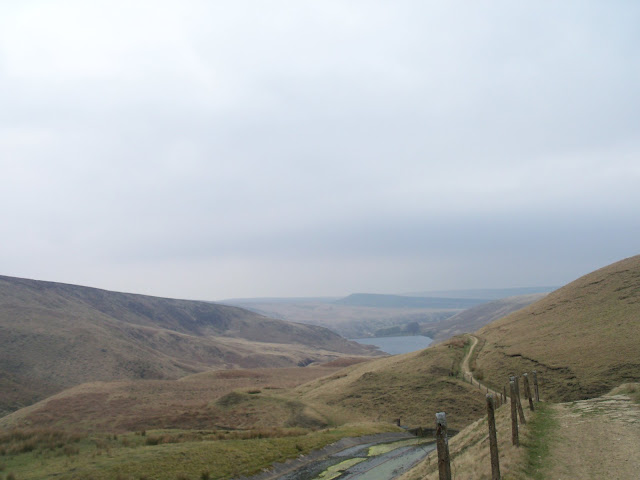 On the track heading down to Wessenden I passed a young lad who was interested in doing The Way but said he was worried about carrying and getting supplies of drinking water.  I told him I had planned my days around access to food and water so hope it would not put him off for to long.  At Wessenden I passed a small flock of geese, some deer in an enclosure they did not look like the wild deer I am used to seeing on my wanders.  I was also sure somewhere along this track I saw white rabbits?  Was this tiredness or just imagination? 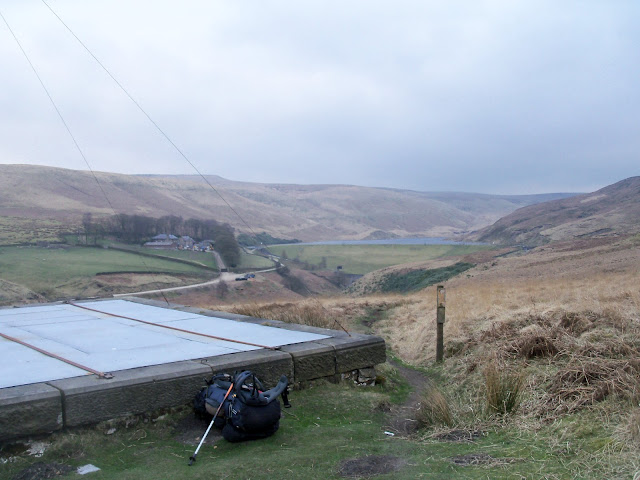 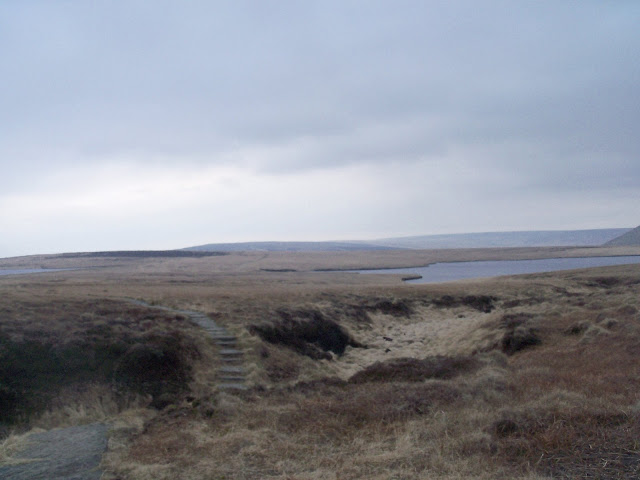 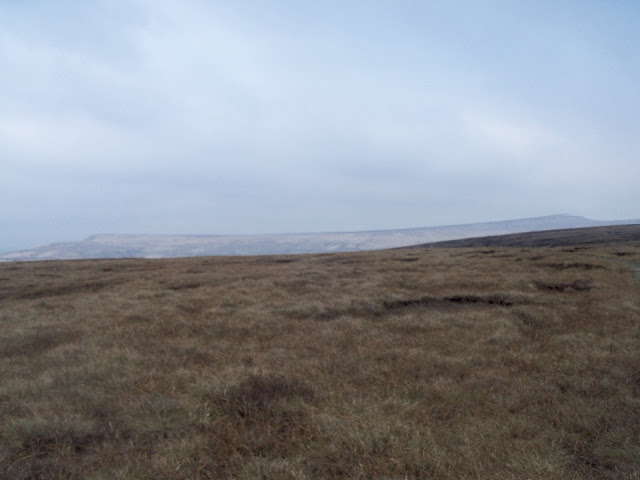 After the buildings I turned left down a short steep bank before crossing a stream then up a very steep bank, I took this route rather than walk into Marsden.  I followed The Way to Redbrook Reservoir where I followed the western edge to the Great Western public house.  It was interesting walking by the reservoir but all I was interested in was stopping for a meal and some rest. 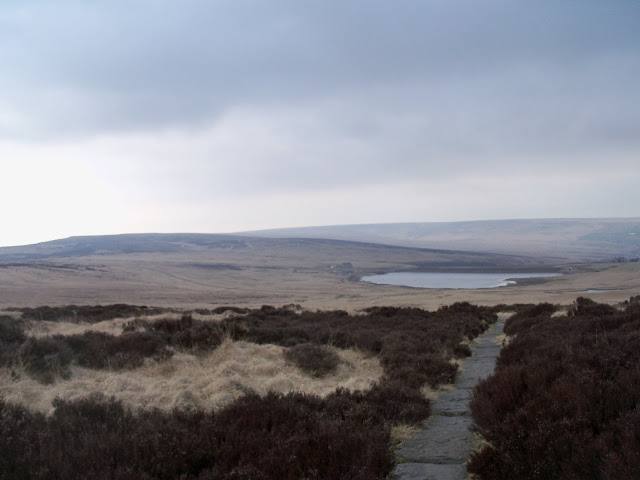 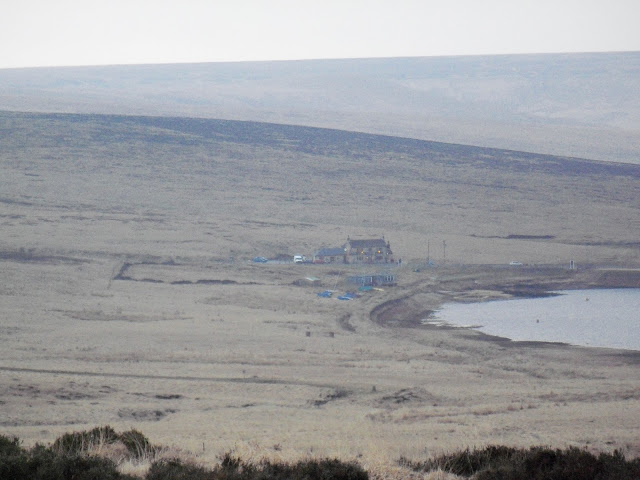 I finished walking at about 1730 at the Great Western Public House.  I could not believe what I saw hanging on the wall.  It was a buffaloes head and it was massive, it was MASSIVE, I wish I had taken its photo.  I asked Alex the owner of the pub where it had come from.  He could not say only that it was part of the fixtures when he took over the place.  I had planned after an evening meal to move along the road and pitch my tent on the side but Alex informed me that all the land belonged to the Waterways and if I had been seen I would be moved on.

I had been walking about 10 hours and covered approx 25km.

I arrived in Edale about 1315 as the train from Sheffield was a little delayed and walked up to the Old Nags Head which had a sign showing that it was the official start of the Pennine Way.

My plan was to start walking on Saturday the next day but as the weather had been good and clear I thought I would try and get as far as I could today.

After a lovely meal of ham, eggs and chips and a larger shandy I set off about 1350. 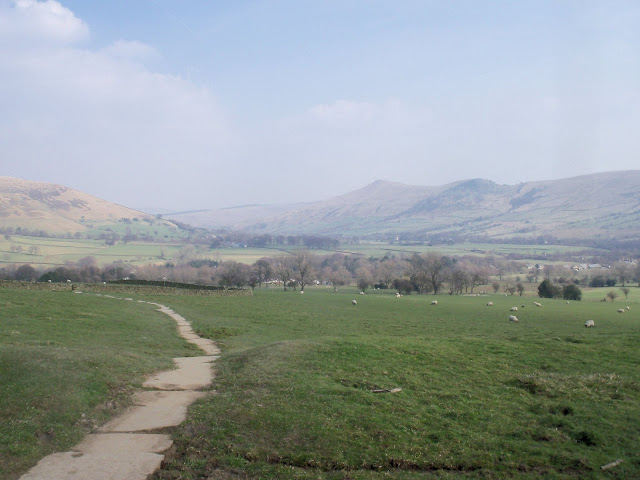 I stopped walking at 1850.  My plan was to go to the Peels Arms Padfield near Glossop it was an extra couple of miles but would have meant a good meal.  However when I got to the junction I could take to Padfield I worked out that it would take about 2 hours and I would arrive too late for any food.  So decided to move a little further along The Way, pitch my tent and have a meal from the rations I was carrying.

Nearly everyone I had passed that day must have thought they were a comedian as they all made a comment on the size of the bag I was carrying.  Although it was big it was not as heavy as on my last walk.  On this walk I was not as worried about eating rations early as they were plenty of places to stop and pick up food all along the route.  (or so I had planned). 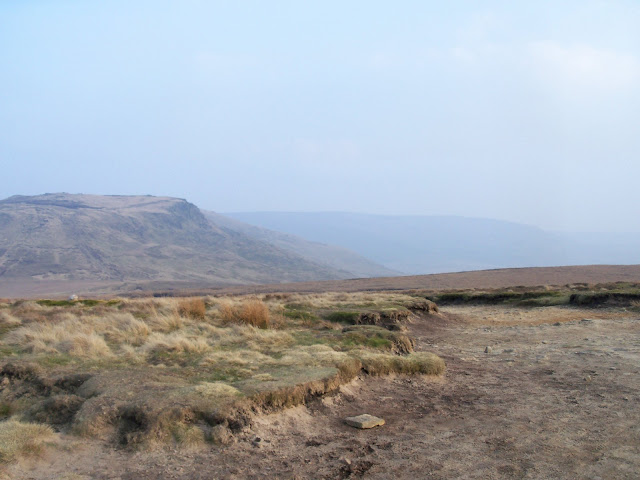 After setting up my tent and starting my jet boil I tried ringing home but I could not get an answer.  Not to worry I would try again tomorrow.  I settled myself in my cosy socks in my cosy sleeping bag.  The sky was clear and the temperature had dropped, but so far so good.  Even though I had only walked for a few hours I knew that as I had not walked into Padfield near Glossop and had stayed on The Way I was nearly a day ahead of what I had planned.  I will have to see if this continues.