This was the first walk I had done as a Shepherds Walks volunteer. If you are interested in Shepherds Walks you can follow the link.  Richard Holmes was the guide, Ian Spencer was another volunteer. Unfortunately the weather was a little wet and windy but it did not stop the walkers.

The start was from car park near the Coquet View Leisure Park, Walkworth. Richard made some introductions, gave us a brief overview of the walk, tides and weather forecast.   We walked from the car park down passed the golf course and onto the beach. I had previously done this walk earlier in the year. 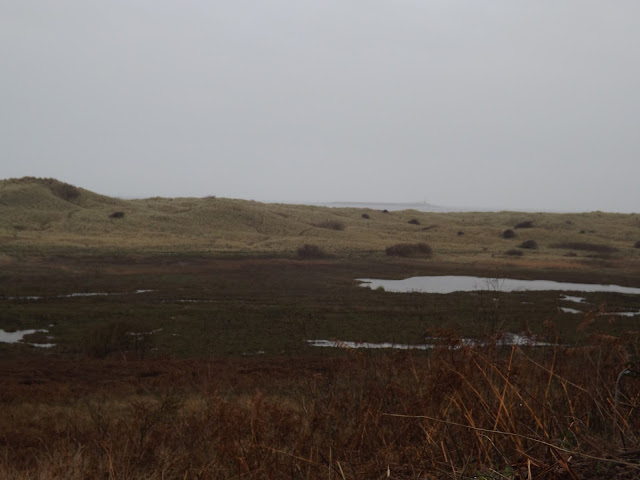 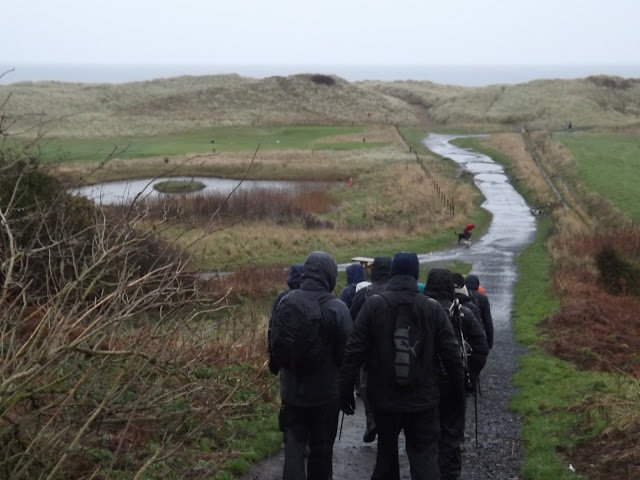 On the beach we turned left and headed north.  It was raining, totally different to the last time I walked here.  The tide was out and the beach was wide and clear. We crossed a headland where Richard stopped us and gave an interesting talk on some of the local geology.

As we moved further north a couple of rainbows came up over Alnmouth.  Richard explained about the Alexander Band that shows between the two rainbows. 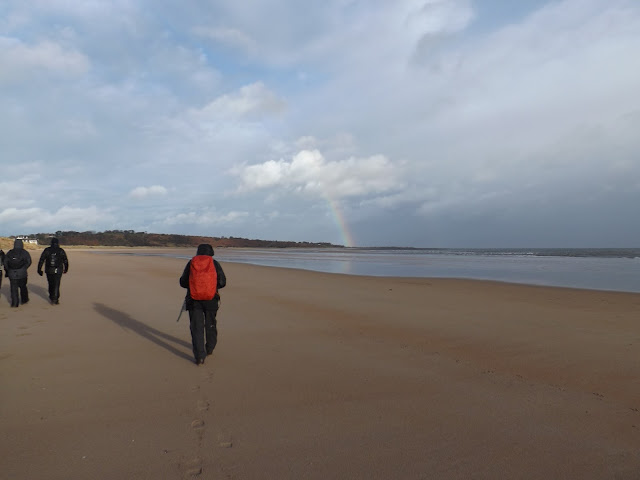 We passed the large old root that was buried in the sand. I had passed this in my walk earlier in the year. The root was a little more exposed due to sand erosion. The rain had eased a little. 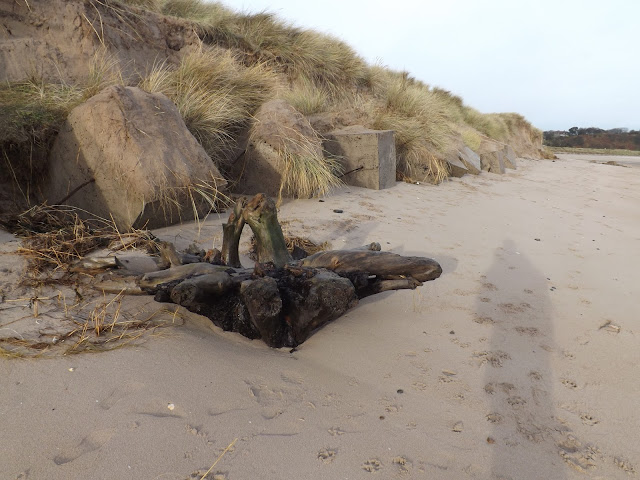 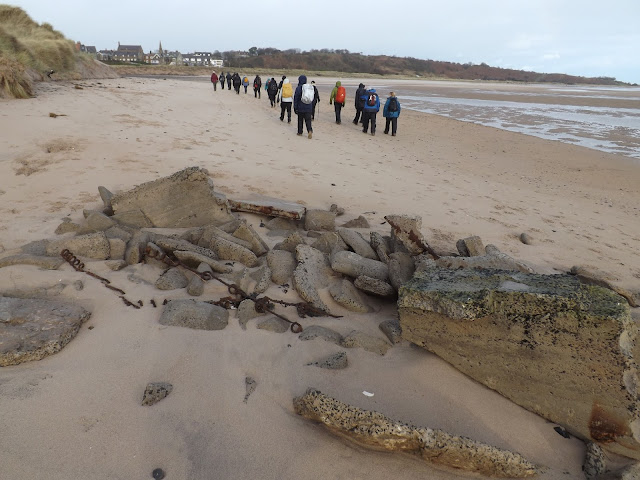 We walked the beach and turned inland, on the south side of the river. On the top we could see St Cuthberts Cross, Richard told us about Church Hill and the storm that separated it from the town before suggesting we have a short break in the lee of Church Hill. 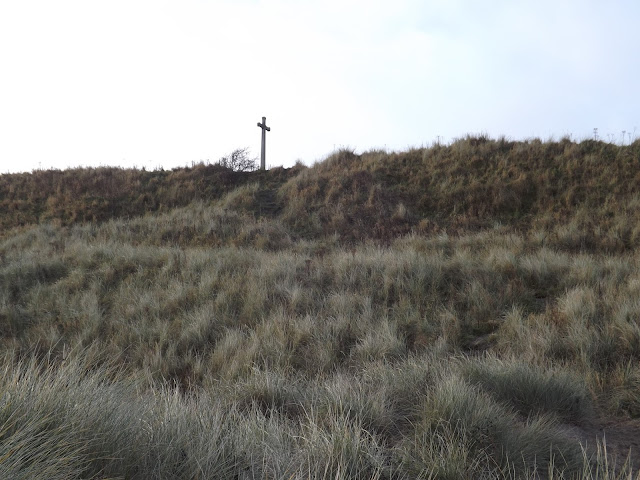 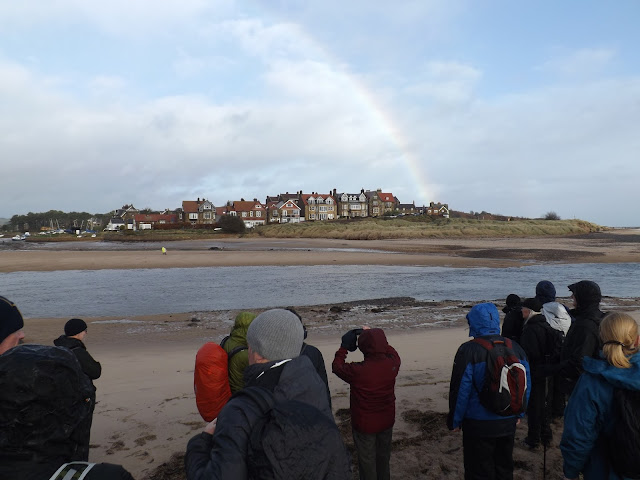 It was very windy as we climbed the hill to St Cuthbert's Cross, after a brief stop we turned south and headed down hill to the ruin of the old church.  Richard gave us some information on the building, a very interesting place. 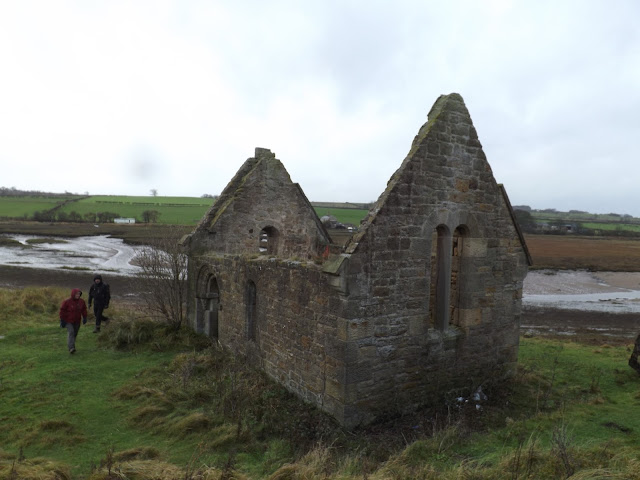 We continued south over some dry marsh ground. Which took us to a lane, earlier in the week when Richard and Ian had checked the route they came across a man in a van who was stranded in the area at the end of the lane where people parked their cars. There is a sign that showed drivers parked at their own risk as at high tide part of the path may flood.

We continued west up hill up the rough path, at the top we were on the main A1068 road, near the road was a cycle path.  It was a nice path to walk, it took us north towards Alnmouth it was a gentle sloping path down hill and skirted a number of fields. 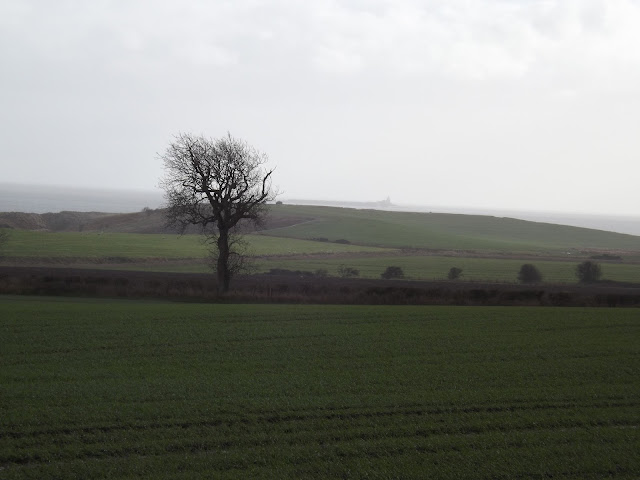 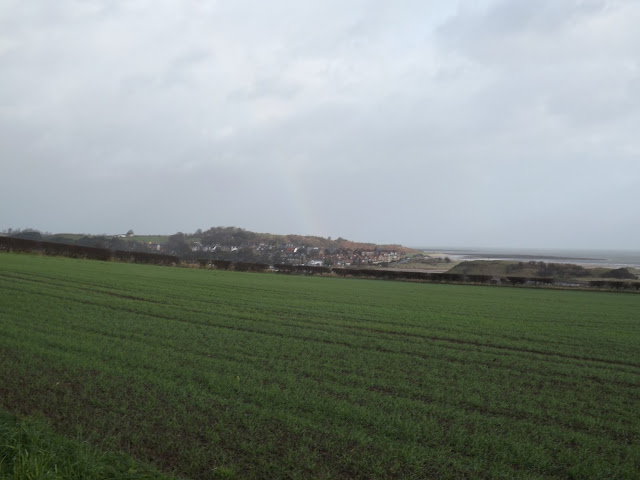 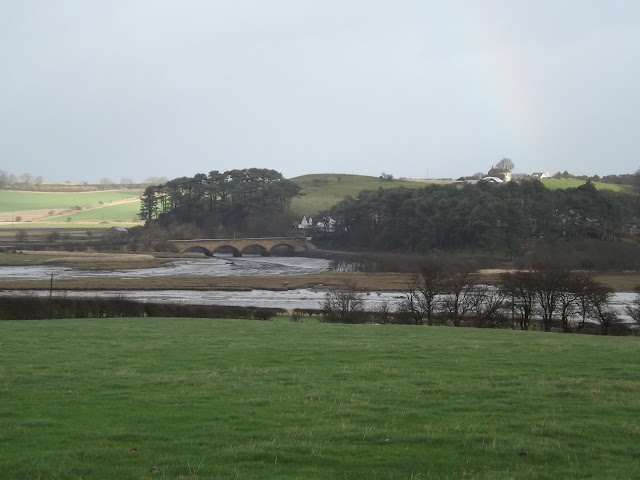 At the top corner of the path, where the path turns east, and heads down hill towards Alnmouth away from the road, we passed the beautifully carved seat dedicated to Michelle Turnbull. 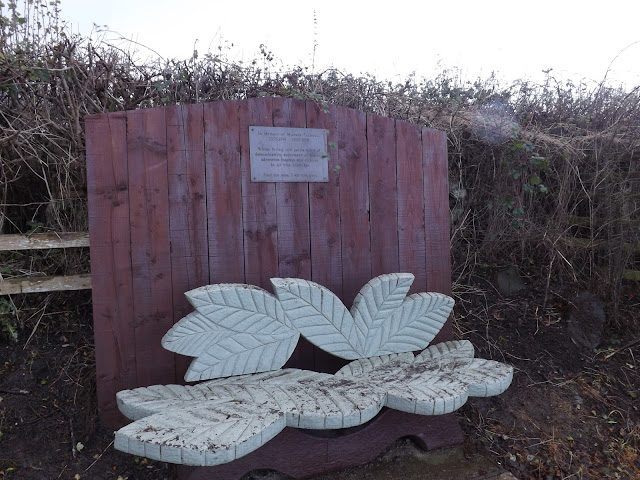 At the bottom the path turns north again for a few hundred meters where it crossed the road onto another path which took us to the bridge.  Beside the large stone structure bridge, which could only take single lane traffic, stood a metal footpath bridge for walkers and cyclists. We crossed the bridge and headed up Lovers Walk on the other side of the road.  Which took us down and around the riverside of the town.

Richard told us a little more history of Alnmouth and the coloured houses being the first concrete constructed houses in England. 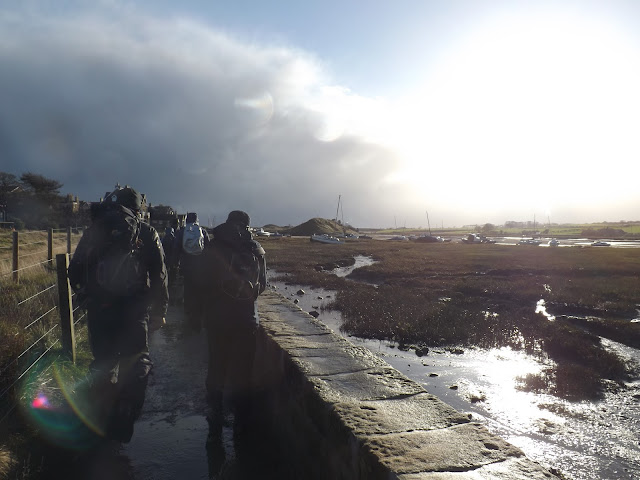 We walked through the town to the golf course with a sign saying it was the oldest nine hole links course in England. Where we stopped for our lunch. 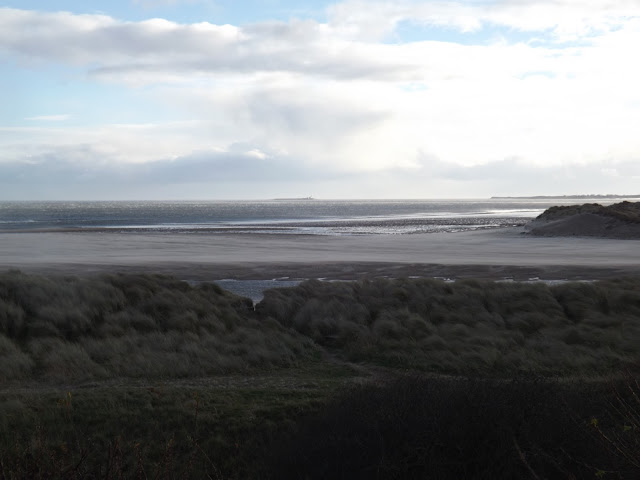 Setting off again we returned to the golf club house and walked up the road where we followed the road around the town taking us opposite Church Hill. We returned to Lovers Walk and headed back the same way we had come.

The forecast was that it would be very windy on our way back but fortunately the wind had settled a little. 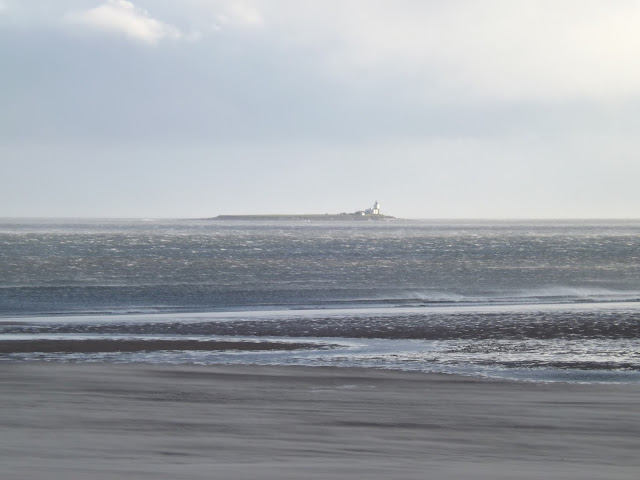 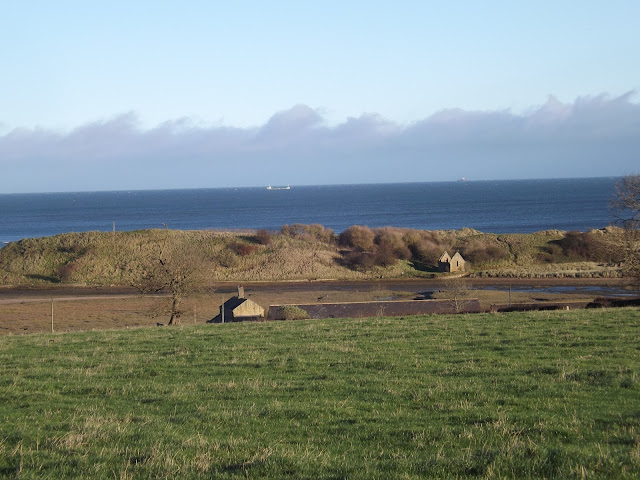 On our return down the rough footpath, rather than turn down towards the beach Richard led us south down the path above the dunes to a caravan site. The sea looked calm and settled compared to earlier. 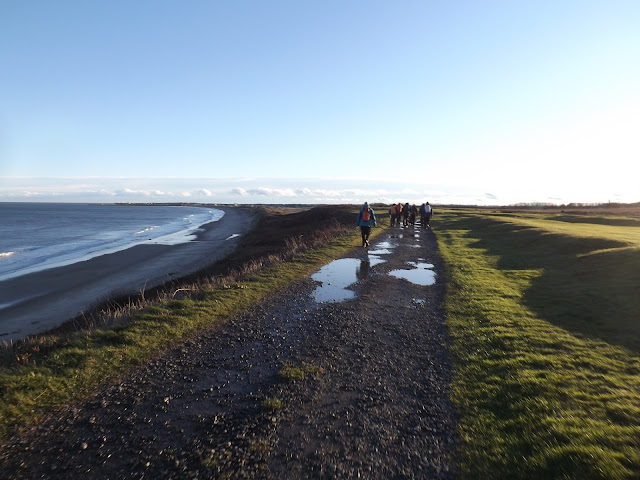 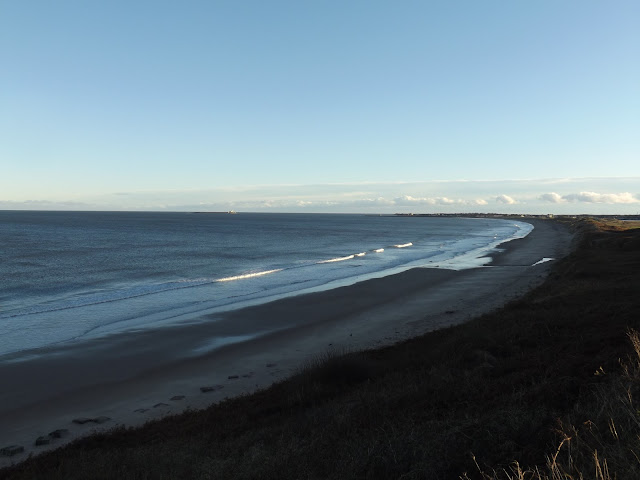 From the caravan site we continued along the path through the golf course.  As the shadows were lengthening Richard suggested finishing our walk along the beach.  As we returned along the beach the weather changed again and we were ending our walk as we started with our hoods pulled up and rain drops falling down.

It had been a good walk, thanks to Richard and Ian for a great day out. We had covered 11 miles (17.7km), I am looking forward to the next Shepherd Walks. If you are interested in doing a Shepherds Walks follow the attached link.