I had looked at Bede's Way, in December, as I passed St Peter's church, when I walked from Roker Pier to Seaham. Bede's Way links the twin Monastery site of St Peter's Monkwearmouth to St Paul's Jarrow. The route is shown on the LDWA website.

Today I walked a couple of km to start the walk from St Paul's Church in Jarrow. The weather forecast had said there would be high winds and rain, another reason to do a relatively sheltered walk. 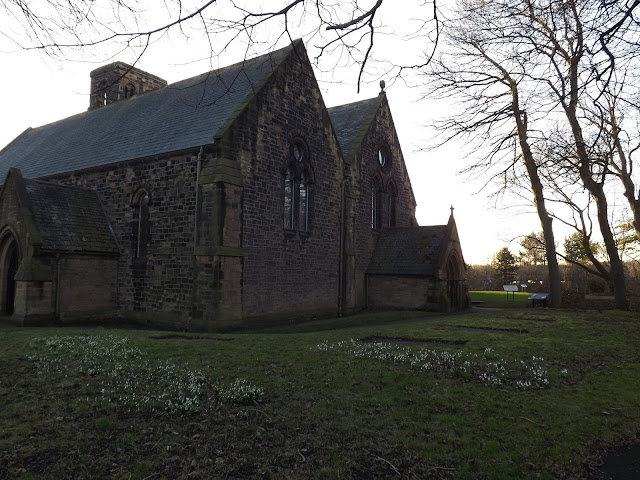 Although cold it was fresh and crisp in St Paul's Monastery. 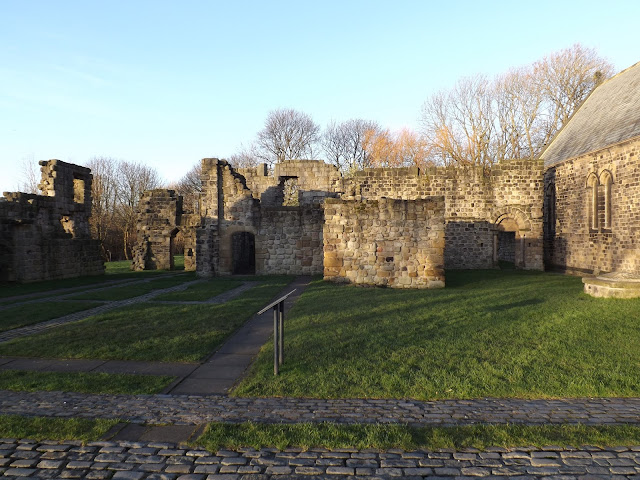 I crossed the road onto the footpath that follows near the route of the River Don, walking south westerly through trees. Reaching a mosaic at a path junction, Bede's Way is signposted on the central path. 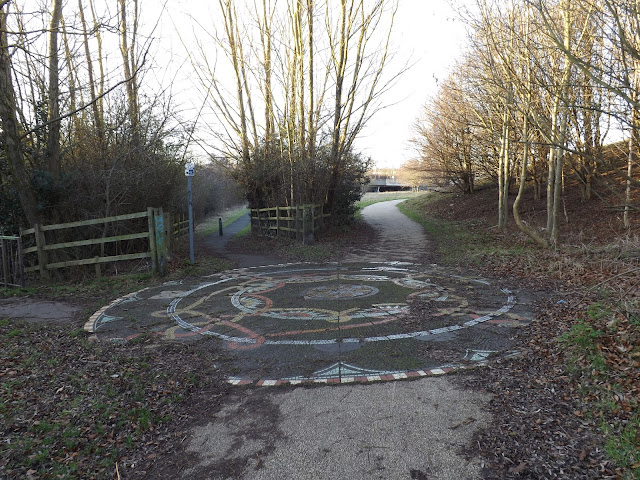 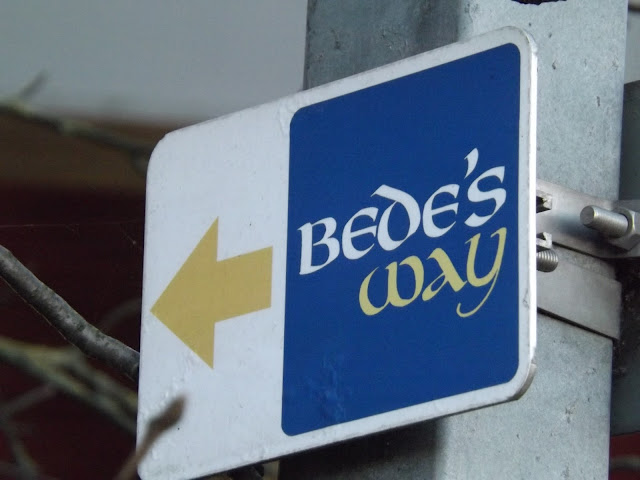 This leads to the footpath on the North side of Jarrow Cemetery. Reaching the road I saw another Bede's Way sign, directing me up the Cemetery Road. It did cross my mind why was it not the St Bede's Way? Then I realised at the time, he would have been Bede not St Bede when he would have walked this way. 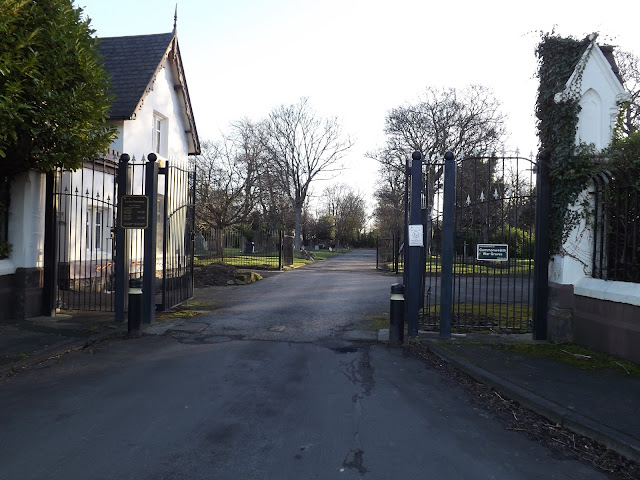 At the top of the bank there was no sign, so following the LDWA route directions I had previously read, I dropped down the bank to follow the River Don. 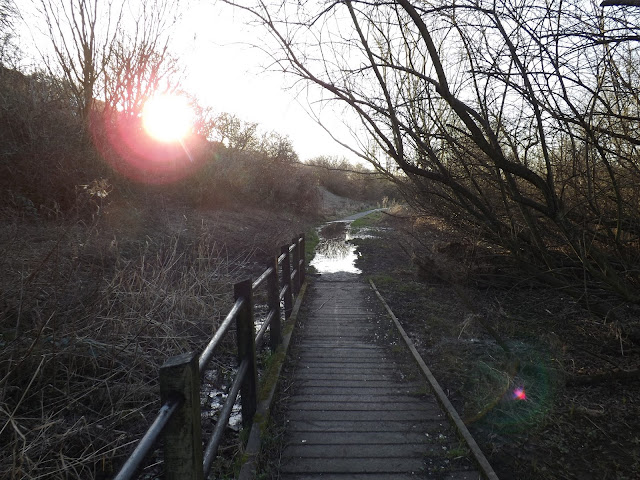 Crossing under the A194 I followed the footpath next to the River Don up onto Hedworth Lane. No Bede's Way sign but a public footpath sign across the road took me up a steep narrow path between high fences. This did not follow the LDWA route but was taking me in the right direction. 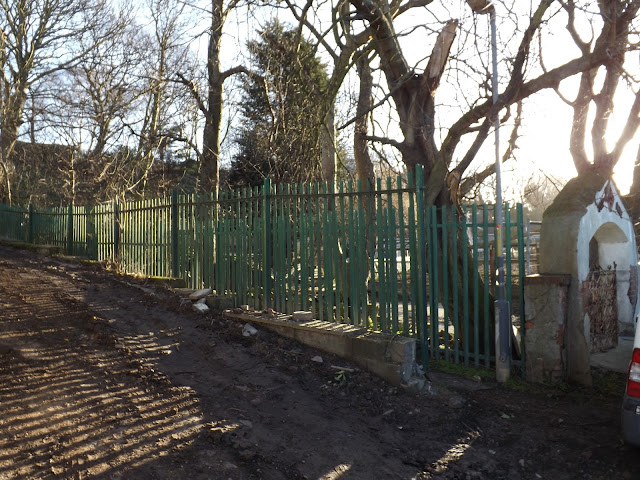 Levelling at the top, I could see the Kirkstone Avenue footbridge on my right, where I saw a Bede's Way sign. The direction the sign came from puzzled me as it did not fit with The River Don or LDWA map. Something to look at on another wander. Today I followed the Bede's Way sign over the footbridge. 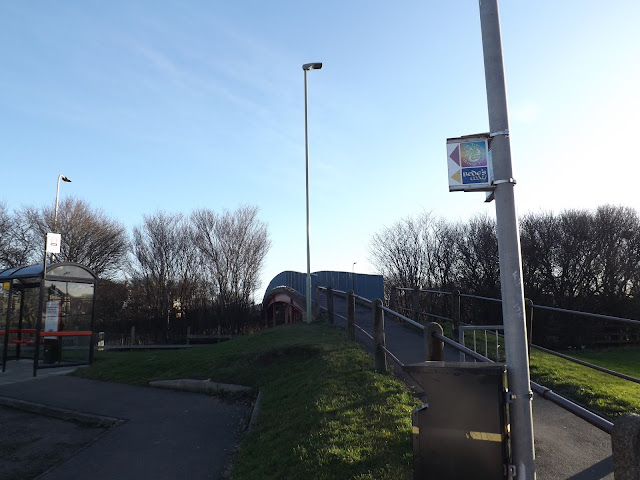 Where once again I could not see a sign, I followed the LDWA route directions South, between the A19 on my right and playing fields on my left.

Passing under a metro bridge, I turned left up some steep steps by the metro line and followed it up to Brockley Whins Metro Station. I could see the River Don down on my right hand side and was following the general direction. Passed the metro station I turned steeply down hill to the River Don and saw a Bede's Way sign that I followed by the River Don, easterly.  There was a lot of work going on in the area, I found a path that would take me north under the metro line. I needed to find a footpath heading south, so I returned back under this bridge and crossed over the River Don onto a footpath heading south. 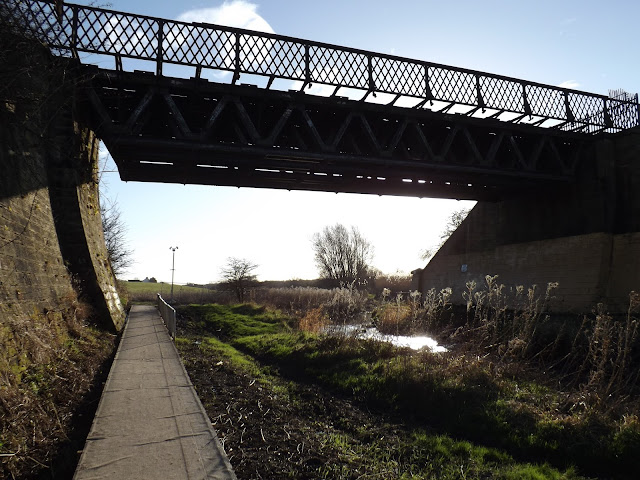 I headed south and came out on New Road, then turned left, east. If I had found the path shown on the LDWA route I would have come onto New Road opposite the school. It was here I saw another Bede's Way sign. I continued along New Road, over the roundabout to Tileshed Crossing. 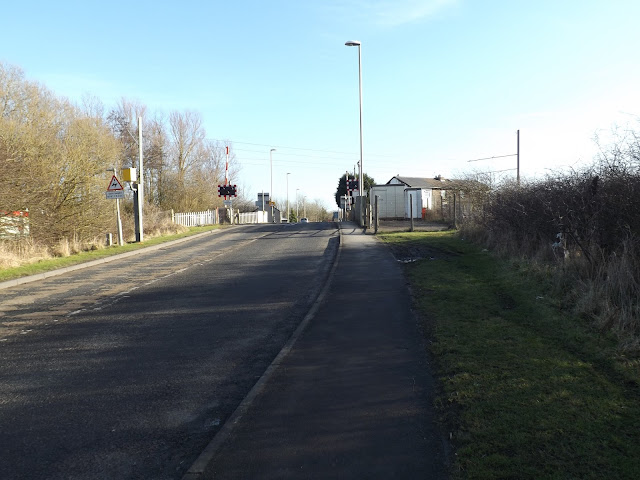 Passed the crossing on the left to a footpath signposted Bede's Way. 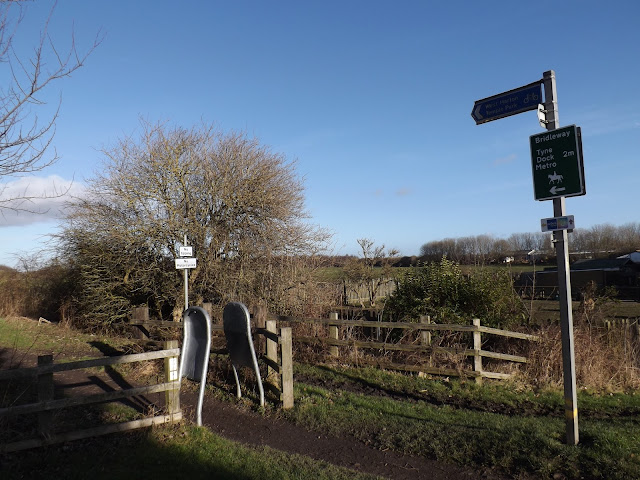 I could see Cleadon Hills to my right. 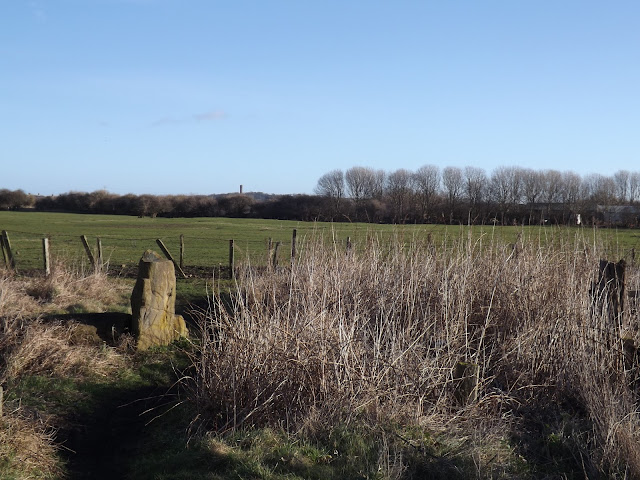 At the crossroads I could not see a Bede's Way sign. I turned right onto Linnets Way to The Coast, all part of the Great North Forest, as this was the direction I was heading. 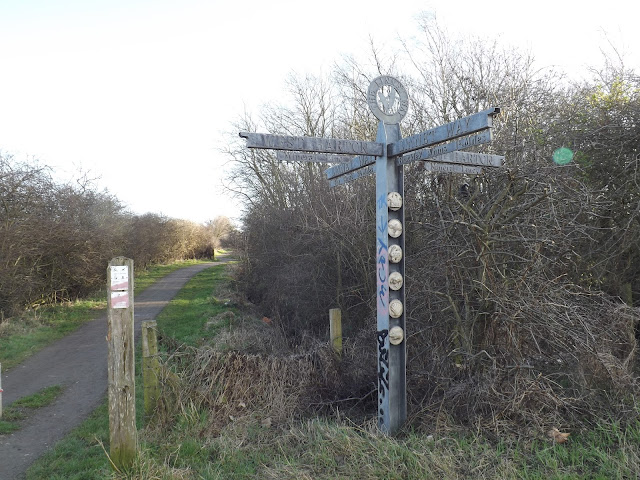 The path took me east before turning left, north onto Holder House Way then right, east onto Nevinson Avenue. Here I saw four Bede's Way signs when one could have done? All of them within a 100m of each other. Continuing east up and over King George Road. Onto a footpath that gently climbs up and over Sunderland Road to Sunniside Farm. With the tower to my left I turned right on a track that runs behind the farm, turned left at the next junction and walked up the track to the footpath. Where I turned right through a gate up by a wall to the Cleadon Mill. 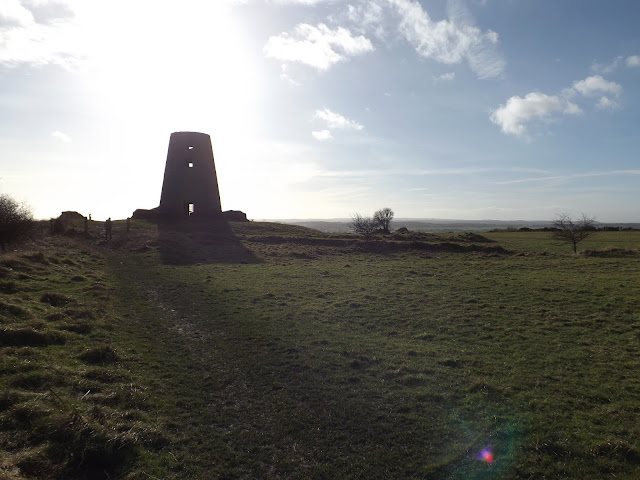 Looking back to the tower. 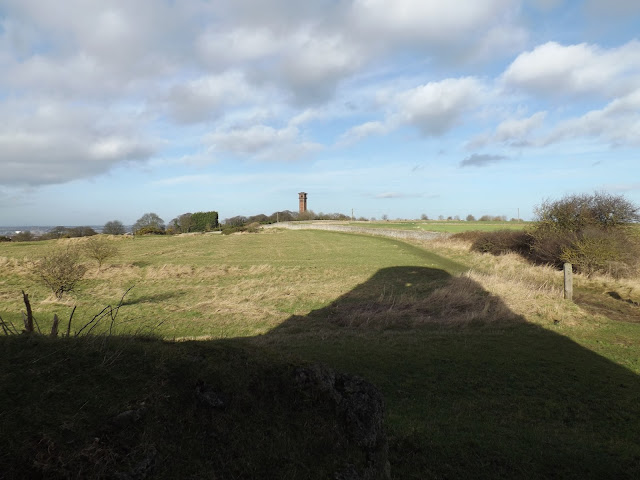 Moving east by the wall there is an open area to cross, with the choice of two paths. I could not see a Bede's Way sign. I took the path to the left up on the top. 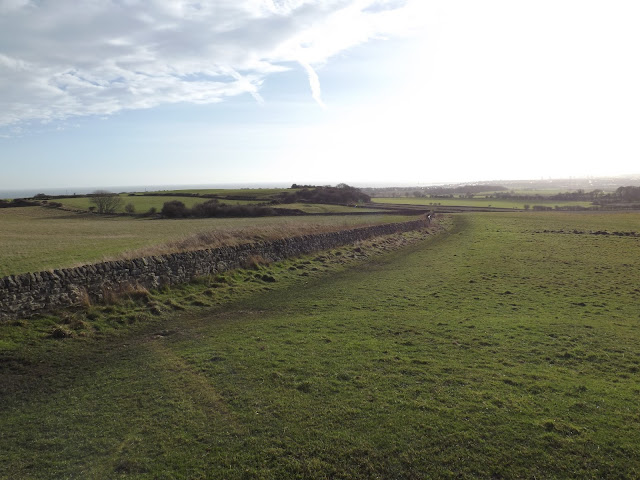 The path edging around a few fields and was slippery with mud, I passed a Bede's Way sign on a style. A turn left and I was heading into Well House Farm. 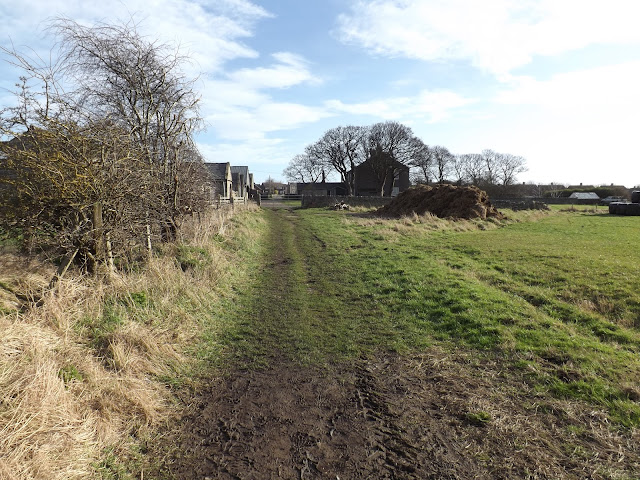 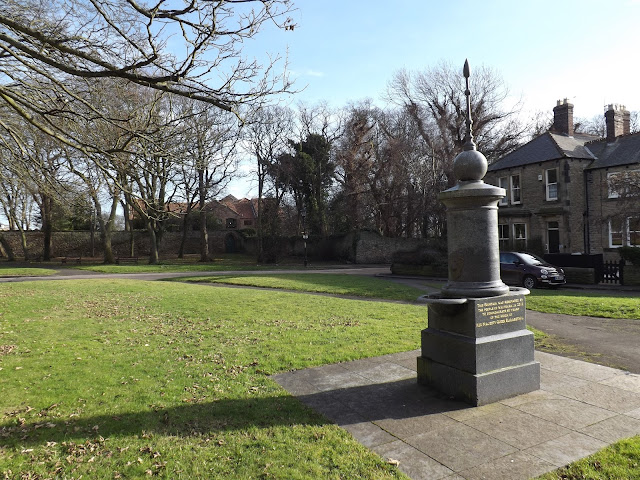 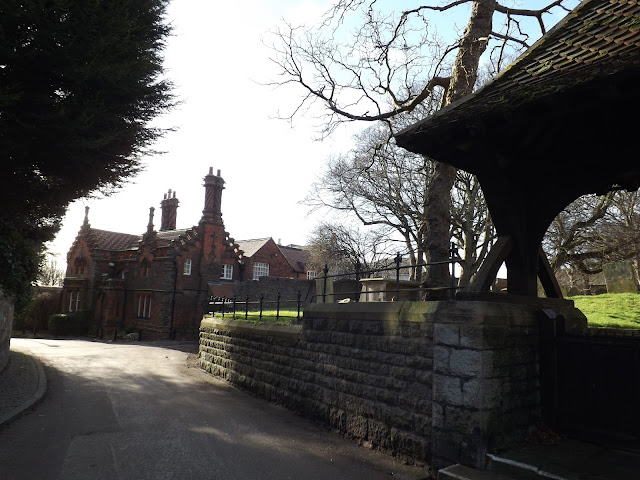 I followed the footpath by the park onto Bents Road. 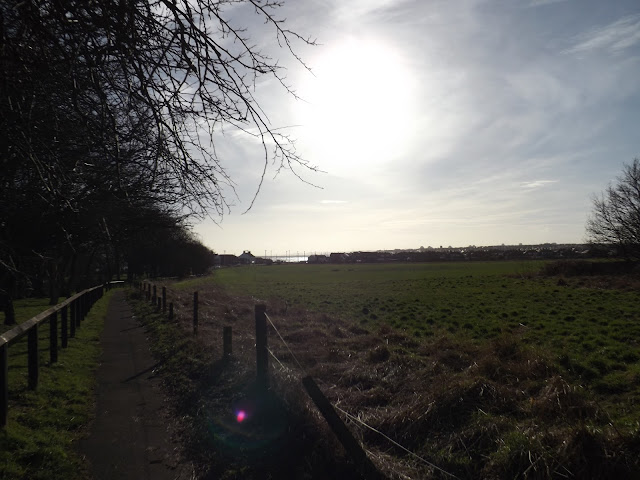 Crossing over I passed a Bede's Way sign and dropped down to the promenade. 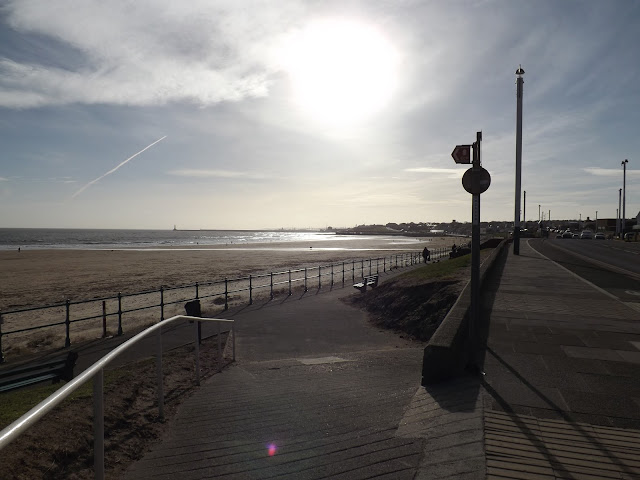 The tide was out today, and the sea calm, very different to the last time I had walked here when Storm Barbara was starting to blow. 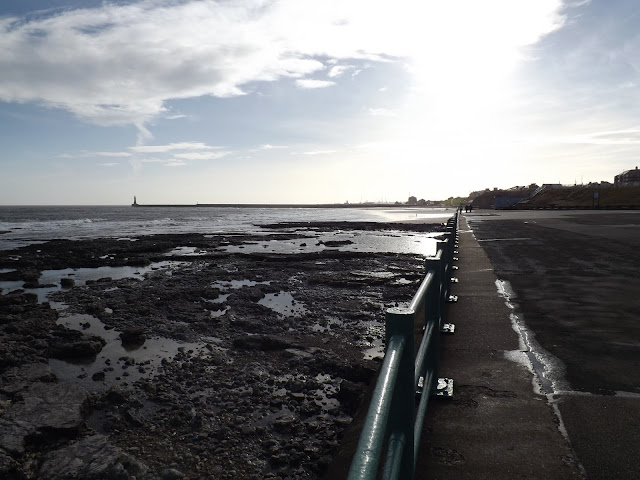 As I was doing Bede's Way it seamed appropriate I returned to the top road and pass St Bede's Cross. A notice shows it was first erected in 1904, then removed during the wars and re-erected in 1949. 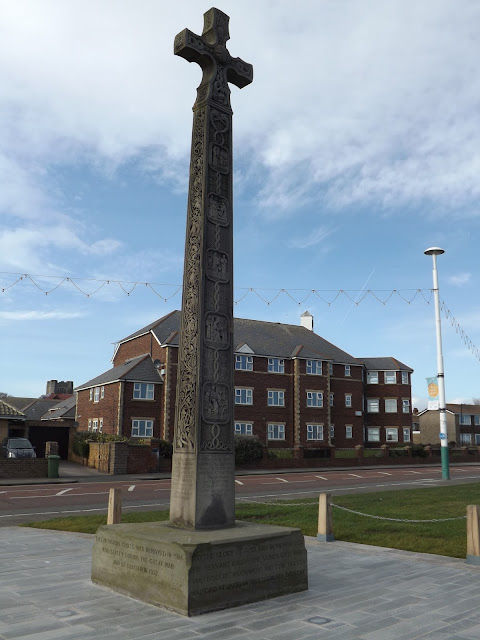 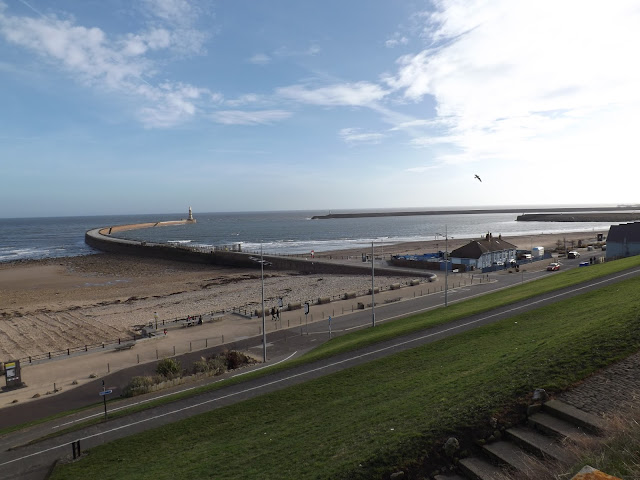 Following down the road southwards, I turned along Harbour following a Bede's Way sign. This was different to the route shown on the LDWA map. 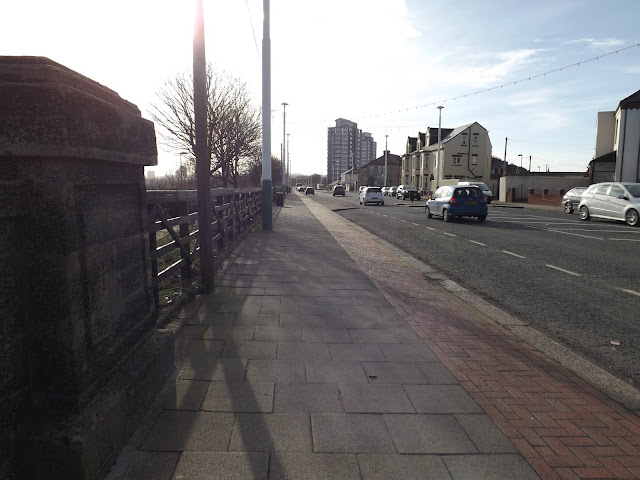 Continuing along the road Dame Dorothy Street, St Peter's church came up on my left. 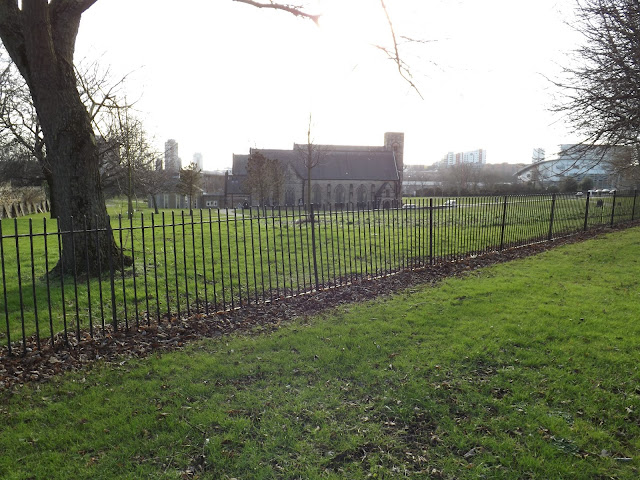 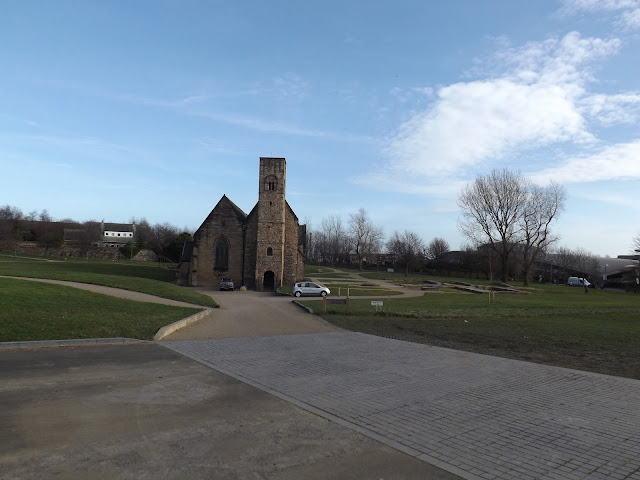 Walking the Bede's Way I wondered and tried to imagine how it would have looked in Bede's day. No housing estates, mineral lines, tarmac roads or the metro line. The hills and rivers would have been there and probably used as features to follow. There would be small homes and little settlements. How big and grand would these monasteries have appeared?