When we discussed what walk we would look at for our annual walk, The Offa's Dyke Path was what was agreed.  Usually our annual walk takes place in May, but this year May was not practicable so we decided to look at doing our walk in October. I got the Cicerone guide on The Offa's Dyke Path for Christmas 2014 and once the dates had been agreed I started planning our route.

The Offa's Dyke Path is a 170 mile National Trail along the border country between England and Wales. We were never going to complete this walk in 5 days so this took off any pressure to complete the walk within a weeks deadline. It allowed us some flexibility, we could take our time, take in the views and enjoy the walk.

I made an estimate using the guide where we would be at the end of each day. From this I identified a central area to look for a camp site base. In the past we have found that using a central base is much more preferable to packing up the camp each morning and setting up camp each night. It also made the logistics and transport relatively easier.

Using the internet I found a number of camp sites within the central area which was near Hay-on-Wye. The best camp site for our needs was the Baskerville Hall Campsite.  As they provided evening meals, access to a bar, showers, swimming pool and breakfast had we wanted it. It turned out to be a gem.

The evening before the walk, Anne and I arrived first and set up the tent. We went for a meal and a couple of drinks whilst we waited for David and Susan.  As with all our walks, we could not do them without Susan, who as always was our support driver, picking us up at the end of each day.

On the day we drove down to Sedbury Cliffs and found the footpath to take us to the start, leaving Susan and the car. 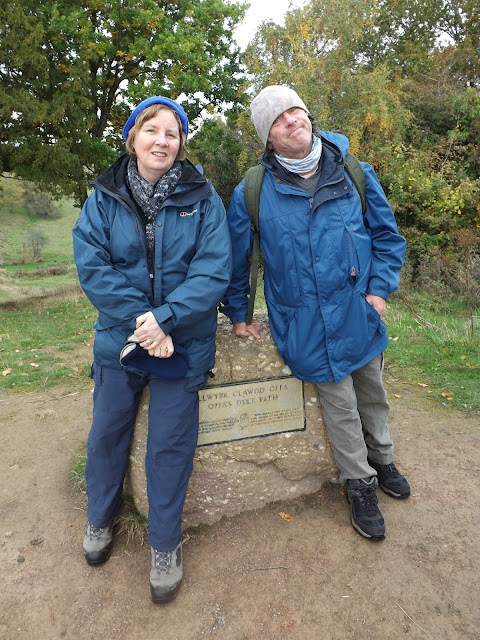 From the stone we walked back along the footpath to the place where we had left Susan and the car. 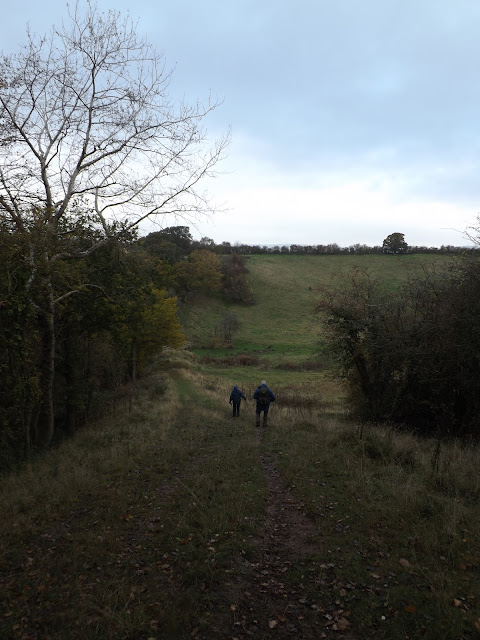 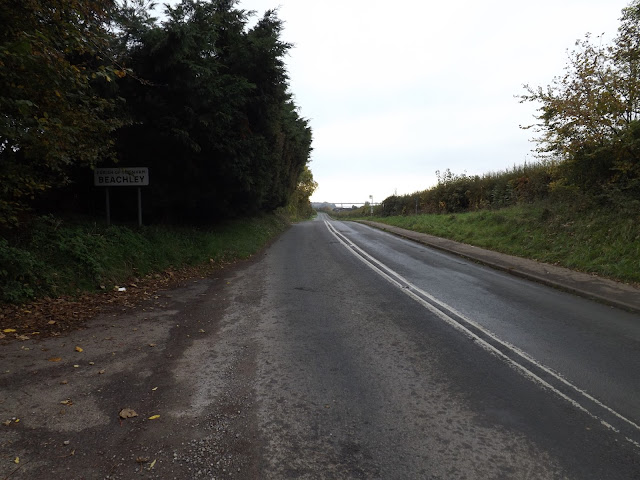 Crossing the road we followed the signs that led us through a number of streets with names such as Offa's, Mercian, Norse etc. Down to a path that followed the River Wye. 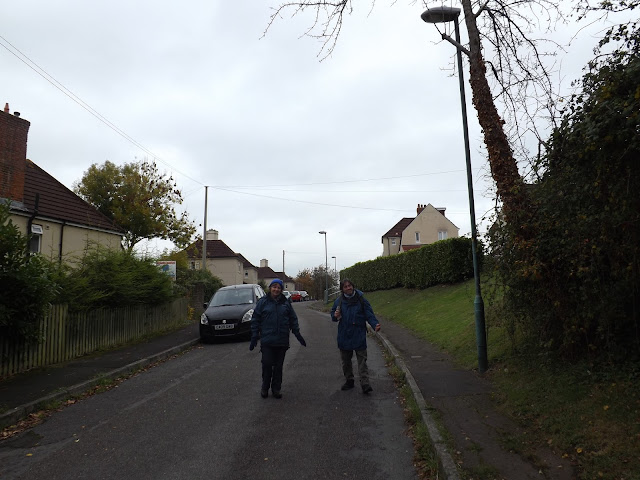 Cross the bridge that took us over the road and railway that run into Chepstow, the road was the road we had taken to Sedbury Cliffs less than an hour ago.

From the road that crossed the bridge we turned off onto a path that gave us views of Chepstow Castle between the buildings. At the end of the path to the left of a big house I followed the sign down a steep path that turned and climbed behind the house to a narrow lane. 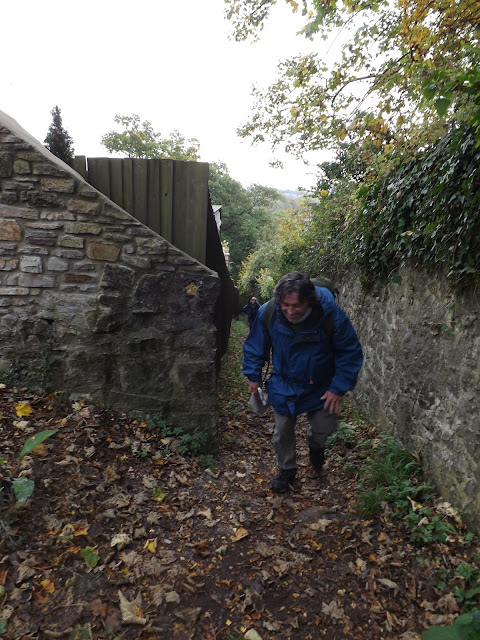 Here we found ourselves walking down a lane between what the guide describes as fortress-like walls. At the bottom of the lane our route joins the route from Chepstow Castle. Where we turned right and walked a short steep lane onto a main road. Across the road we followed a lane north east, before turning left into a field. The guide describes the field being full of buttercups, we saw only three. Although we do not have the buttercups and daffodils described in the guide we had the rich autumn colours which were outstanding. 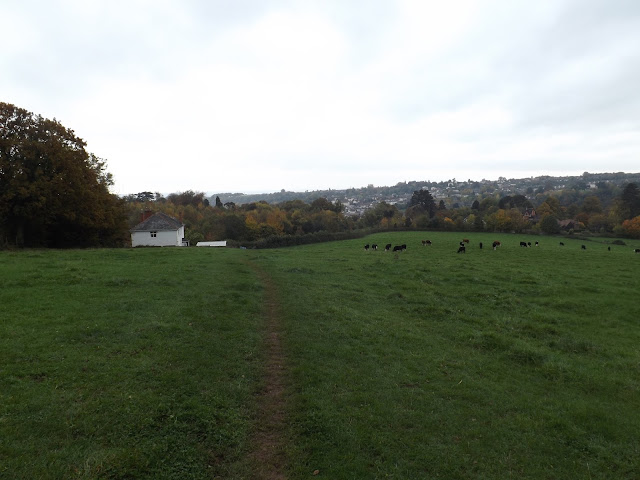 As we crossed the field we saw what remains of an old lookout tower which is not mentioned in the guide. 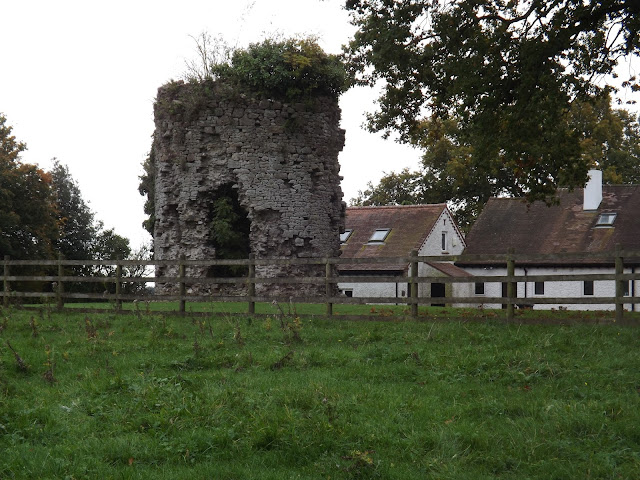 Across another few fields and we saw another grand looking house near the Lancaut Nature Reserve. When we had crossed this field we took the advice from the guide book to turn right and head towards the road and not left towards the nature reserve. 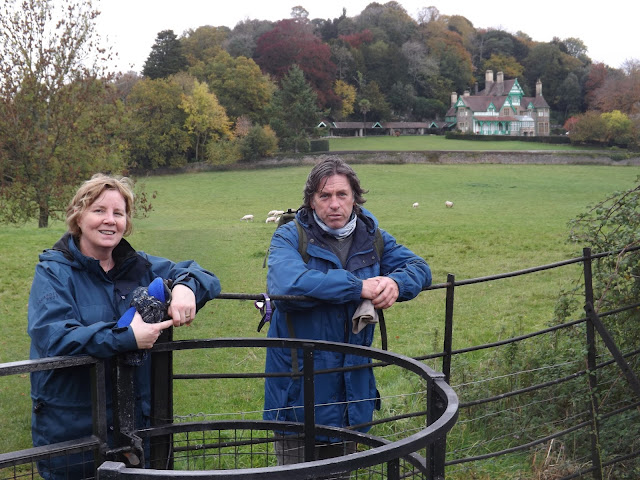 From the road we followed the path up a climb which took us beside an open quarry where we saw climbers preparing ropes. During our short stop just below Wintour's Leap we took some photos which do not do show the height or give the views any justice. 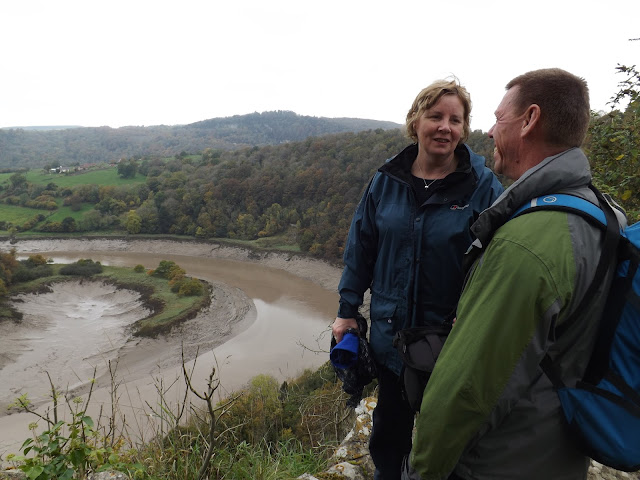 For the next few km, we followed the signs up and down fields, along country lanes, passed big houses and into a wood that followed a ridge that climbed gently, called the Tidenham Section of Offa's Dyke. The autumn colours were brilliant as we moved along the rise, we noticed a lot of leaves had fallen but the trees still held a lot of leaves. We came across an opening in the trees and could see down onto Tintern and its Abbey below. 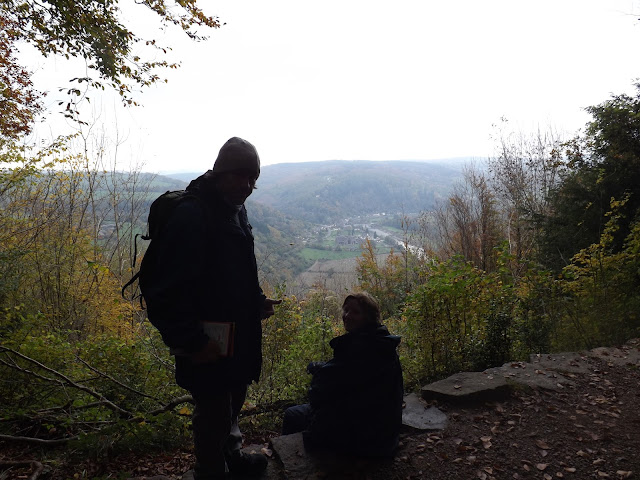 After a short rest we moved a few hundred meters up to what is called the Devils Pulpit. 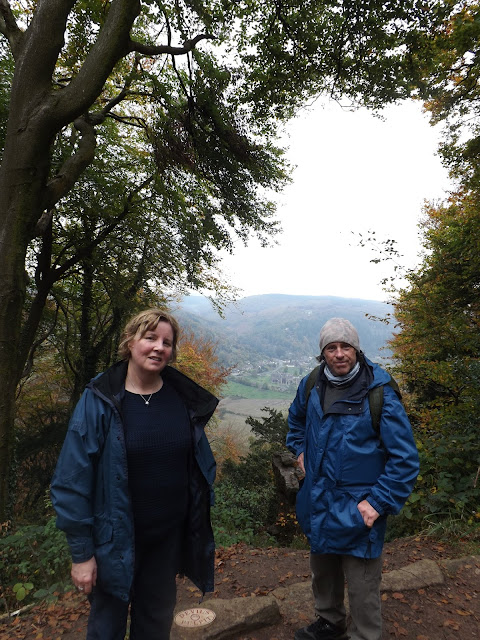 This was where we saw a number of walkers. Behind the pulpit was a dip in the ground where a tree stood with its roots wrapped around a rock. 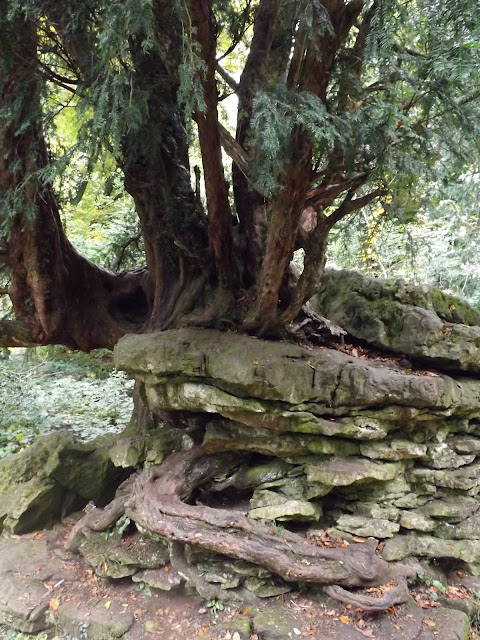 From the Devil's Pulpit we continued along the path through a number of gates, as the ground dropped we moved across an open field. After a further drop we reached a junction in our path. We had arranged to meet Susan at Brockweir for lunch, so turned left towards the village.  Susan had already informed us that unfortunately the pub was shut on Monday lunch times. 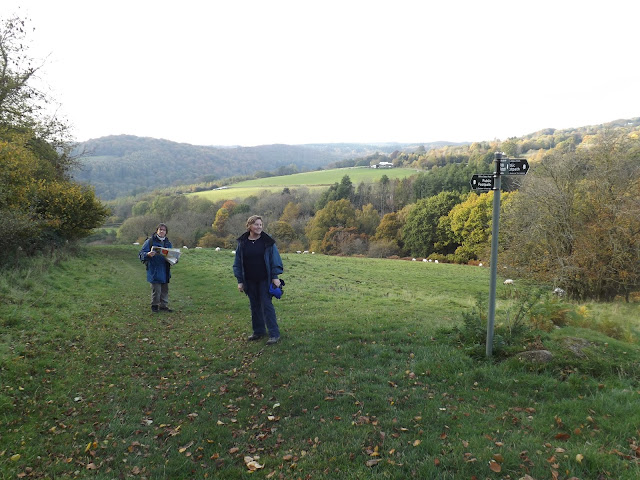 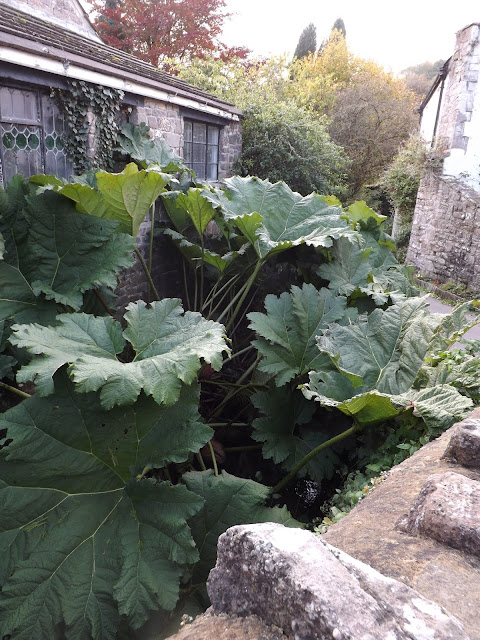 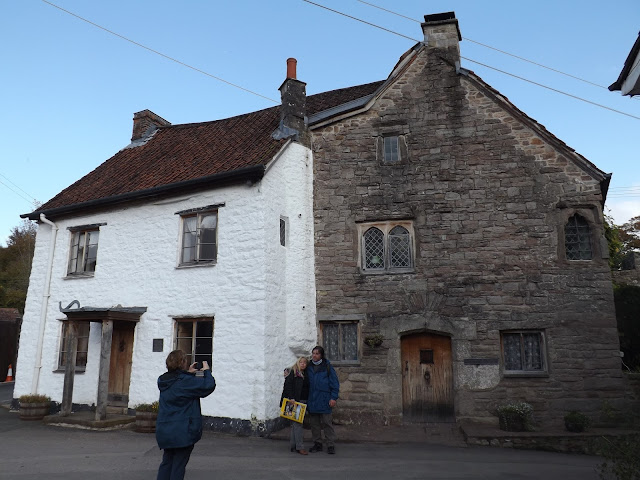 My guide shows that the Moravian Church provides soft drinks for weary travellers, so we had a look inside and had a glass of juice. 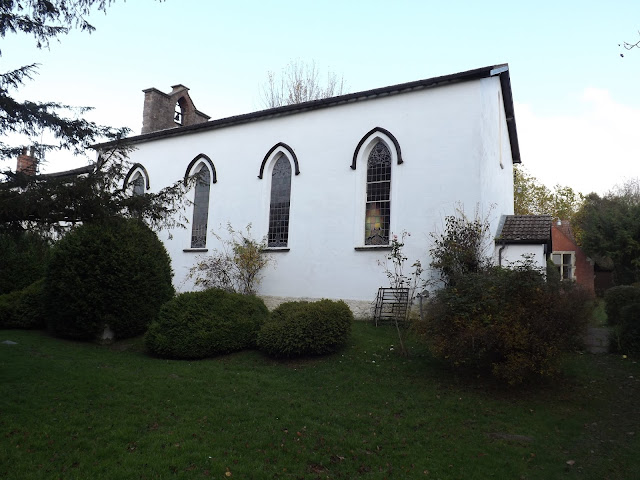 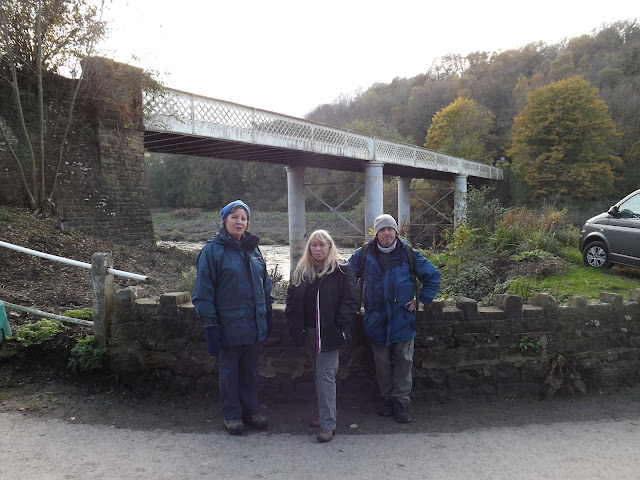 During our rest we discussed the next part of our route, taking into account the early nights and a place where we could get picked up. It was agreed that we would take the low level option route, another goodbye to Susan and we set off along the banks of the river.  At times this route is liable to flooding. 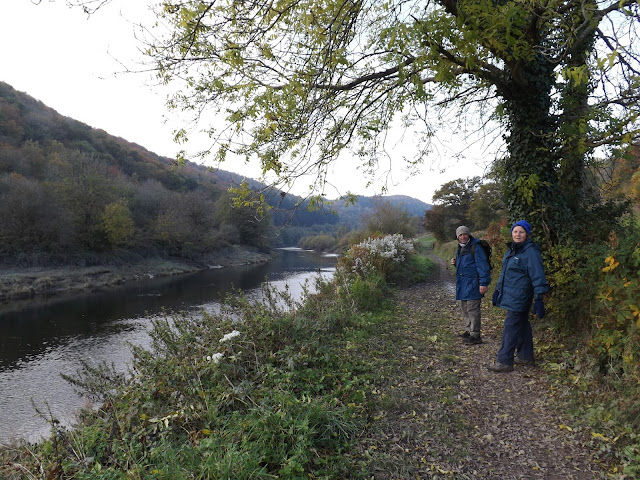 In places you could see what was left of wooden docks where boats would have brought things up the river and this was where it was transferred to smaller flatter boats to continue upstream. 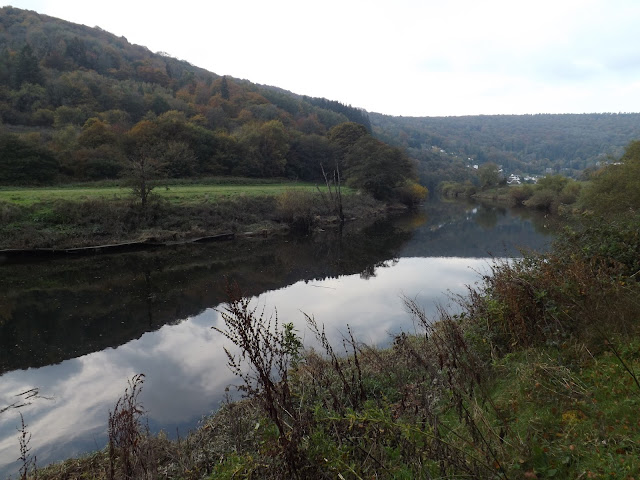 This was very flat and we made good time reaching Bigsweir House where spring flowers like crocuses were coming up. 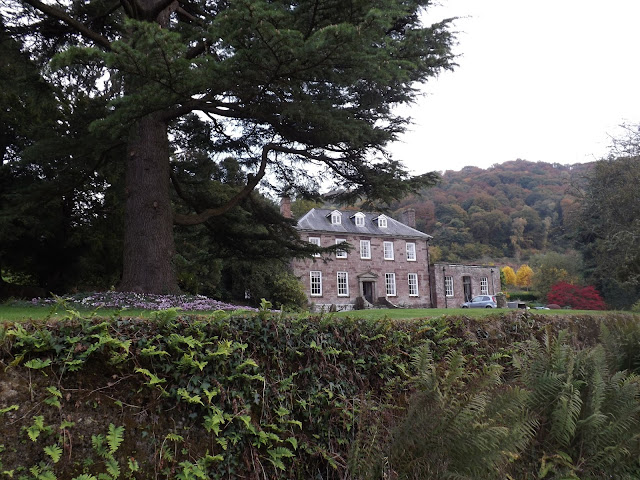 We were a little early for Susan at Bigsweir Bridge so turned right up the road to Bigsweir Wood. 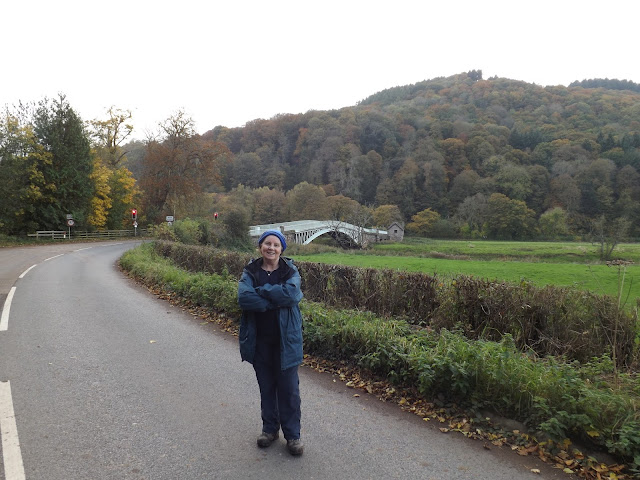 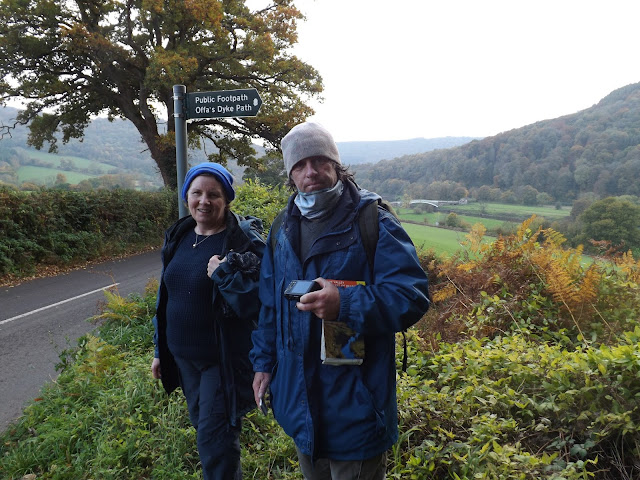 When Susan picked us up we stopped for a meal on our way back to Baskerville Hall Hotel campsite. Where we had a short swim to stretch off our aches before retiring to the bar. We had covered 19km with a 250m climb, short of my plan but it does not matter. The aim was to enjoy the walk which we did.

Boz North
Details correct at time of walking.
If you have enjoyed reading my walk or found it useful you may also like to read other walks I have done on The Offa's Dyke Path or other areas. Please check out the links on the right hand side.
Follow link to the next day of our Offa's Dyke Path, Bigsweir Wood to Lower Hendre
Posted by Boz North at 13:00