The weather forecast showed that today was going to be wet, well until at least 09.30. Today was the day we walked over the tops and there would be very few places to stop and no places to stop for food. We could hear the rain on my tent at the Baskerville Hall Hotel campsite, as usual it always sounds worse in the tent that what it was outside. Our drive down to the start was wet, David suggested a coffee before we started walking to give the rain a change to blow over, unfortunately we could not find anywhere.  So from the layby Susan picked us up yesterday we set off walking. Crossing the style we set off in the rain, we crossed a small field with a gentle climb, over the Afon Honddu, a small river. 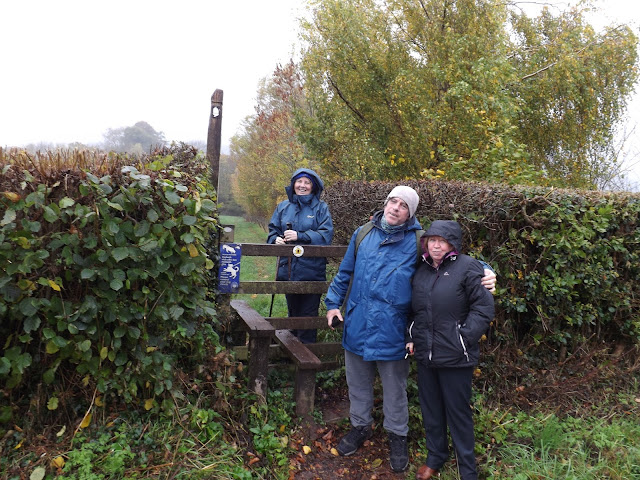 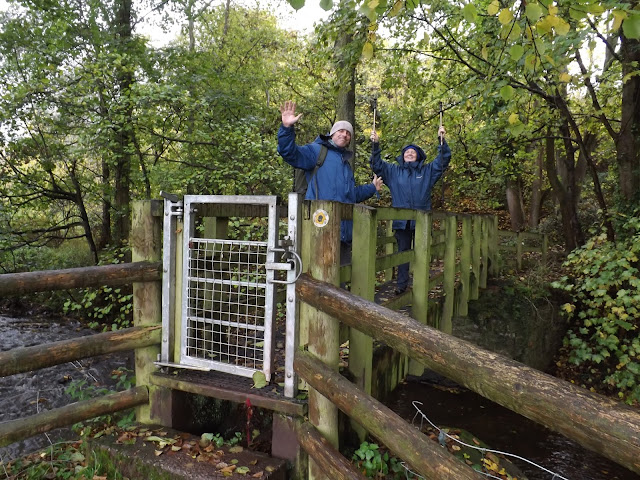 The path took us up a steep climb to a railway line just as a train came along, loud and near. Safely over the other side our route continued to climb up to a road that took us up through a farm. 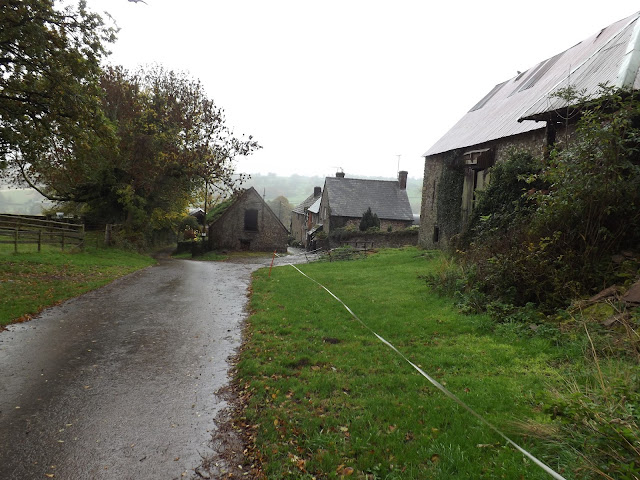 Once passed the farm we turned right through a field full of cows, due to the rain it was very muddy, deep in places, it was not just mud? We headed north west diagonally across the field to a tall mast. We walked passed the mast and onto the road, it was still raining heavy. The hedges on the side of the road gave a little shelter against the wind. At the road junction we turned right and headed downhill. Down the road we passed a number of trees covered in paint? was it for Halloween or graffiti? Anyway we turned up a narrow footpath by a field gate on the left and started climbing. 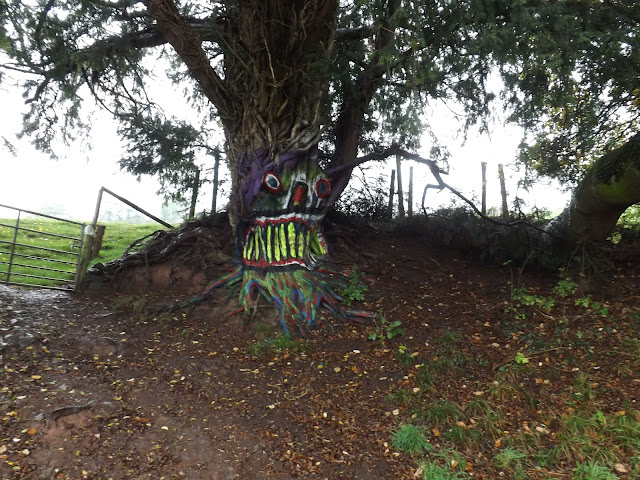 As the path opened up it turned into a steady steep climb to start with, as the rain was blown into our faces, and the mist hide the views. We reached a wall and followed it up hill for a while before reaching an old hill fort at 332m. 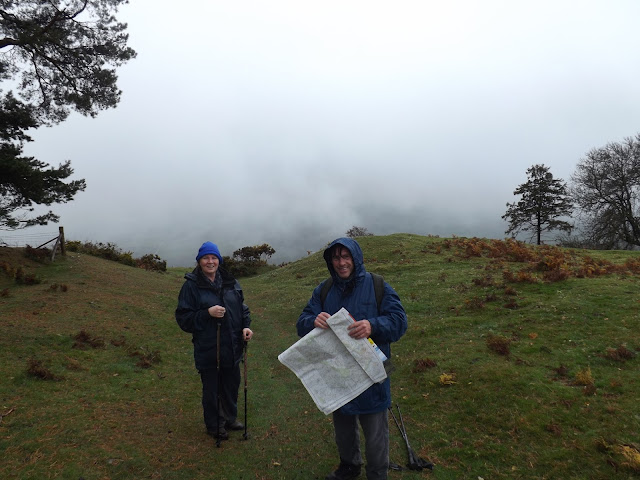 A short stop while David sorted out his map and we started climbing again, we had a few hundred meters of almost level ground near a farm track, and this was where we saw our first wild horses. 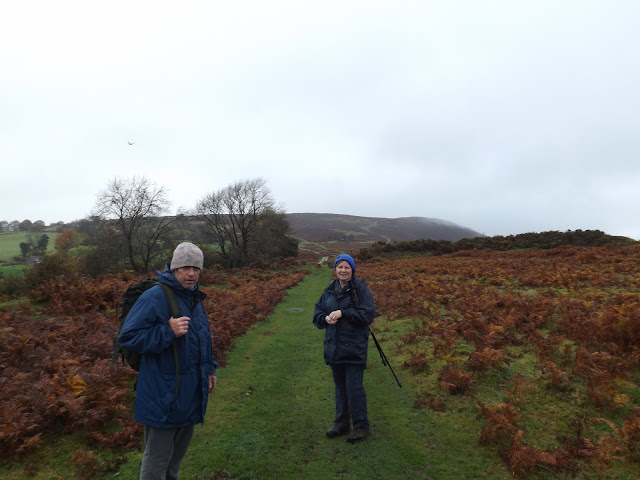 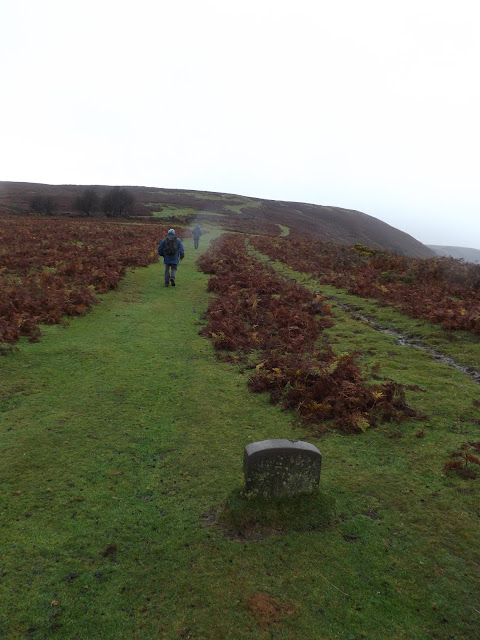 I saw a strange mural on a rock within a stone wall. 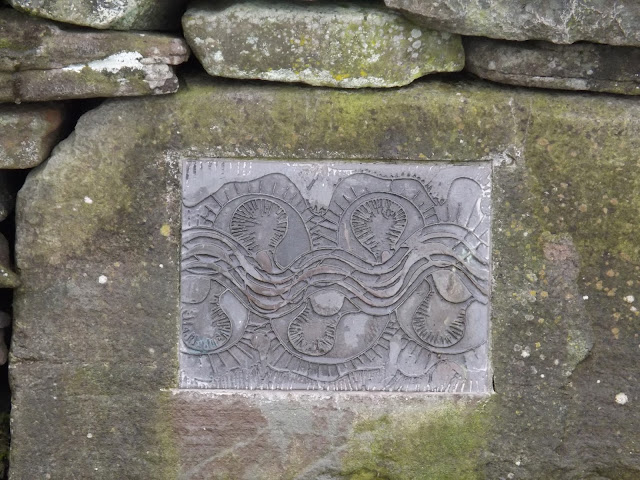 As we climbed up hill the weather started clearing, the rain stopped and the mist cleared a little allowing clear views back down the way we had walked up.

Soon we approached the first trig point, Hatterrall Hill at 464m where we found a small hollow with a little shelter and had a short rest. 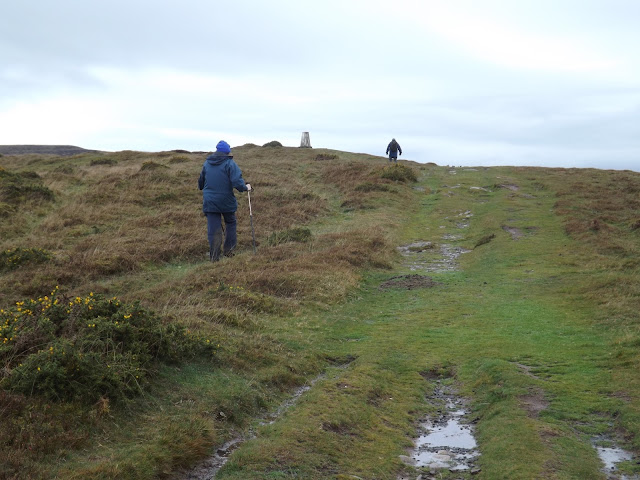 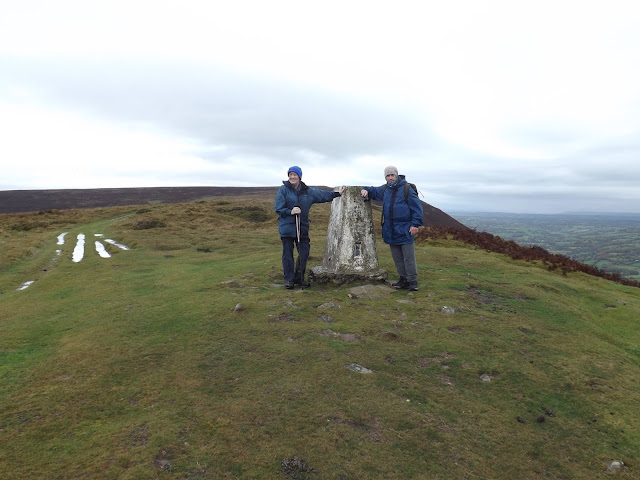 One trig point down, three to go. I told Anne and David what I had learnt from a chap I saw at The Cheviot the other week about trig points. I thought it was interesting. Another short area of almost level walking then we started to climb up hill again.

The path turned to the right slightly as it then turned behind the rise to our left, climbing to a spot height at 531m, The Skirrid was now clear of clouds to our south. 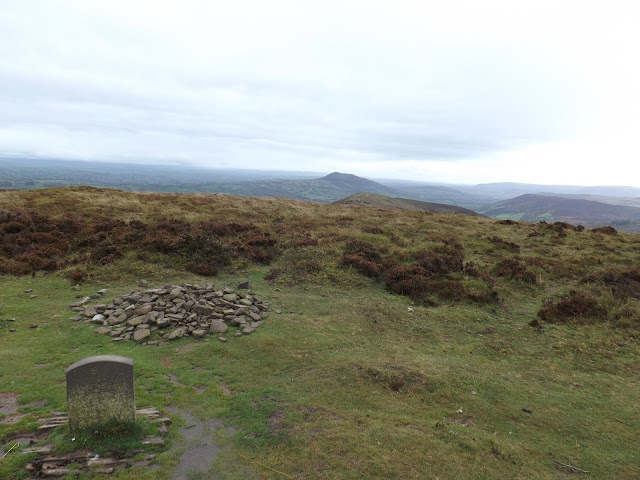 The views also opened up ahead of us, we were making good time and we could see where we were going. We could see the ridge twist ahead down to our left and climb back up to our right. 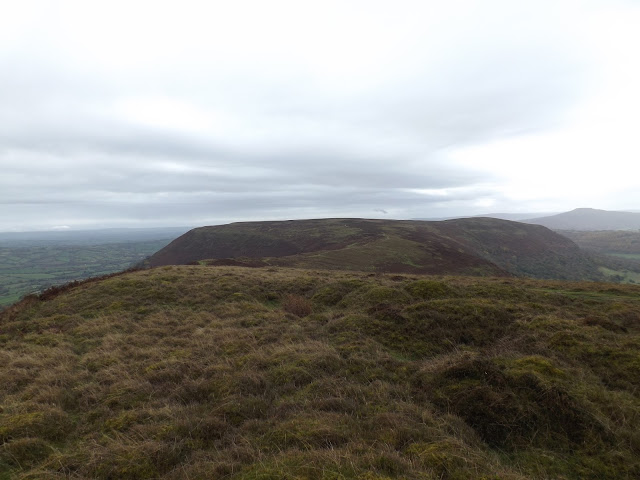 Our second trig point came on the horizon at Rhiw Arw 552m. (two to go). 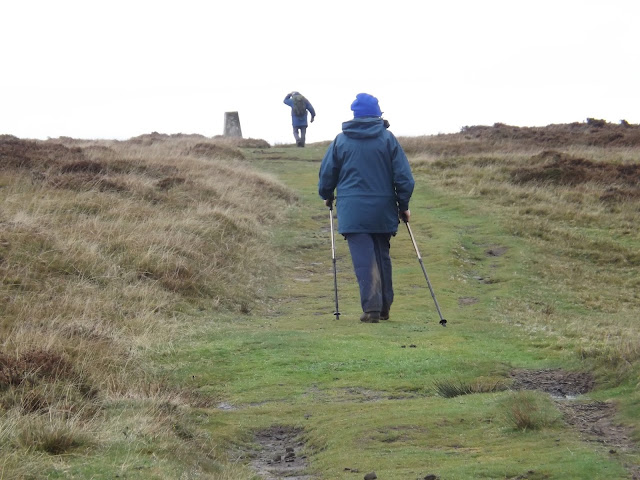 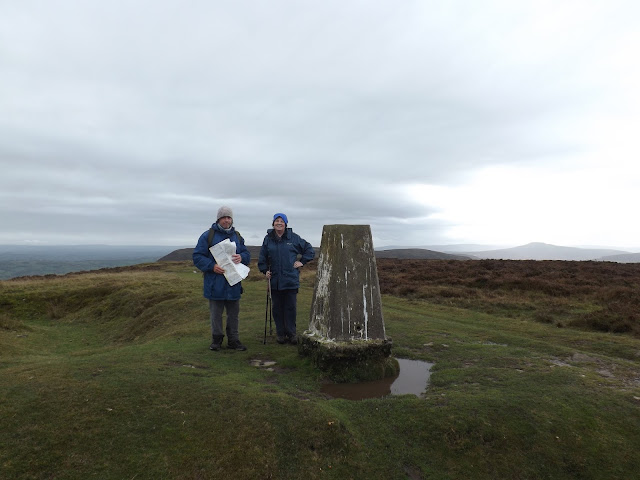 The ridge levelled before dropping slightly to the left, the views down the valley were stunning with the autumn colours. In the distance David spotted the sun glinted of the next trig point. 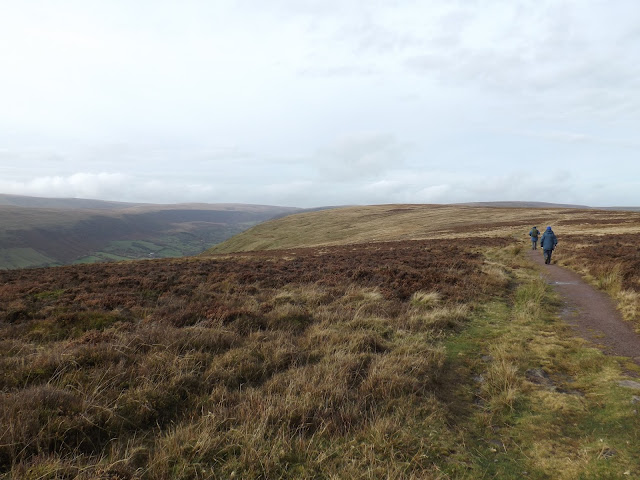 We continued along the route as the path levelled and soon reached the third trig point North Daren at 610m. (One to go). 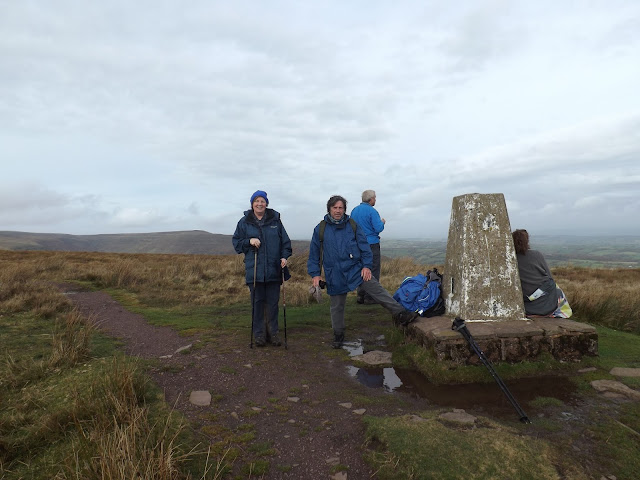 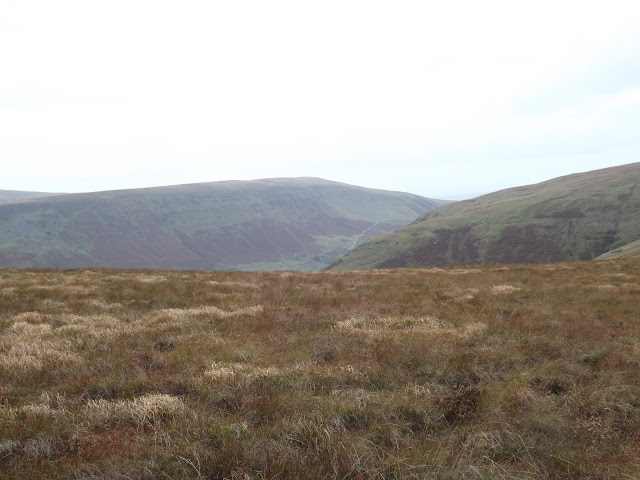 We then moved through an area where stones had been piled up all along the area, the path was slippery in places as it climbed back up to the top. 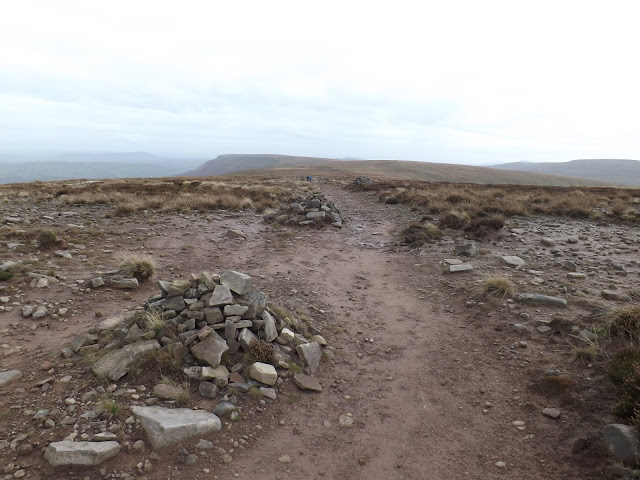 In places the path was made up of large stones and in places boards all to help preserve the wear on the peat path environment. 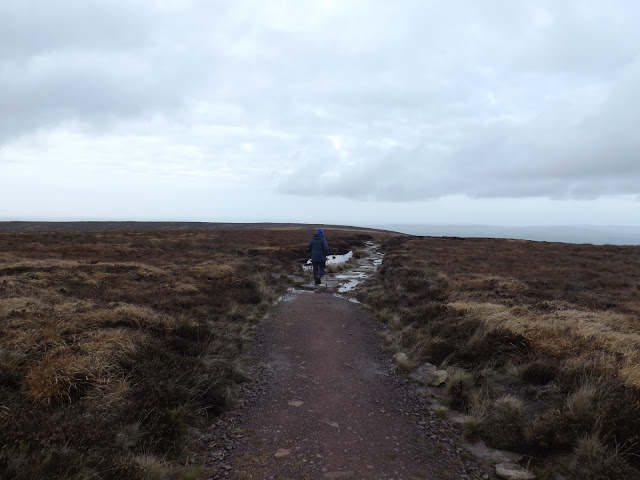 Another short drop and the last climb up to the 703m. 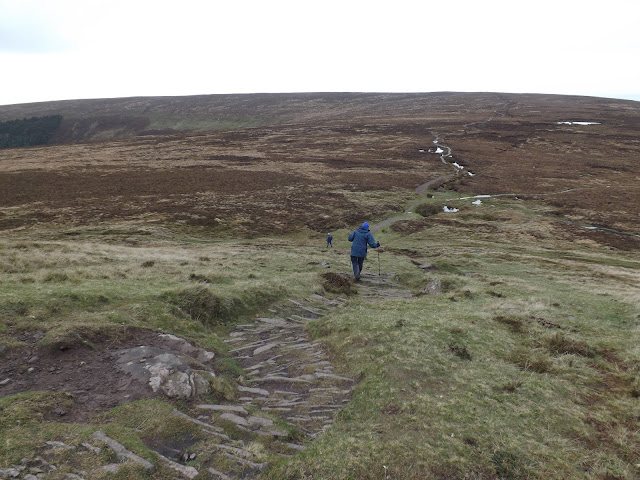 From the top we could see the last trig point Hay Bluff 677m. 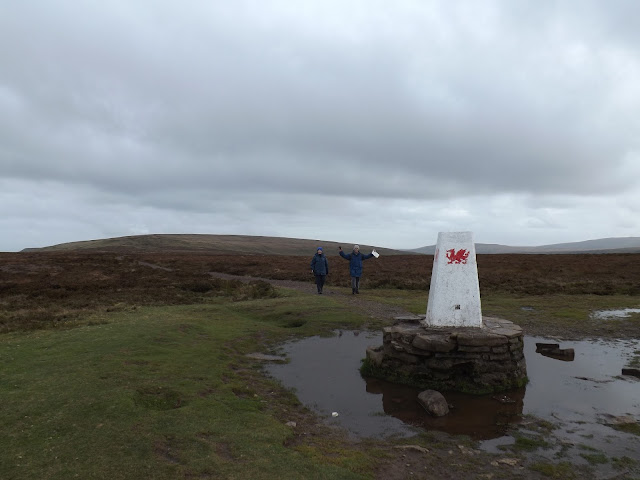 From the trig point we moved to the northern edge and looked down on Hay-on-Wye. David at the Baskerville said it was an easy walk from here down to the town but we had planned to meet Susan at the stone circle at the bottom of Hay Bluff. 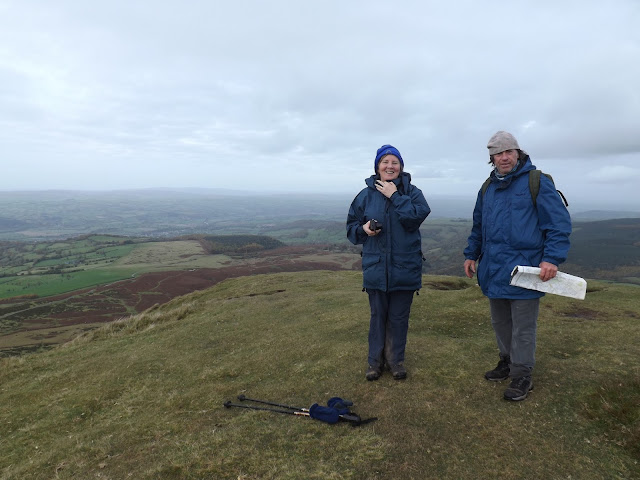 It was a steep path down Hay Bluff to the stone circle, there were lots of people about. Susan was waiting.

As we had the time we had a drive into Hay-on-Wye and had a look around the town, a very interesting place. Followed by a trip back to the Baskerville Hall Hotel where we had a swim, stretch off our muscles, clean up, then a quick change before going back into Hay-on-Wye for a well deserved meal.

Walking today we had covered 20 km with a 700m climb, a good day walking.


Boz North
Details correct at time of walking.
If you have enjoyed reading my walk or found it useful you may also like to read other walks I have done on The Offa's Dyke Path or other areas. Please check out the links on the right hand side.
Follow link to another walk to Hay Bluff.
Follow link to next day, Day 5 Stone Circles to Clyro Brook.
Follow link to previous day Day 3 Lower Hendre to Pandy.