There were patches of mist as we drove from Baskerville Hall campsite but this soon cleared on our way to our start for today's walk. The way the mist just sat in the valley's with the tops of the hills showing clear was stunning, this soon cleared. We left Susan at the car park and started the gentle climb up through the trees. The autumn colours, the reds, browns and gold coloured leaves were brilliant, and cushioned our path. 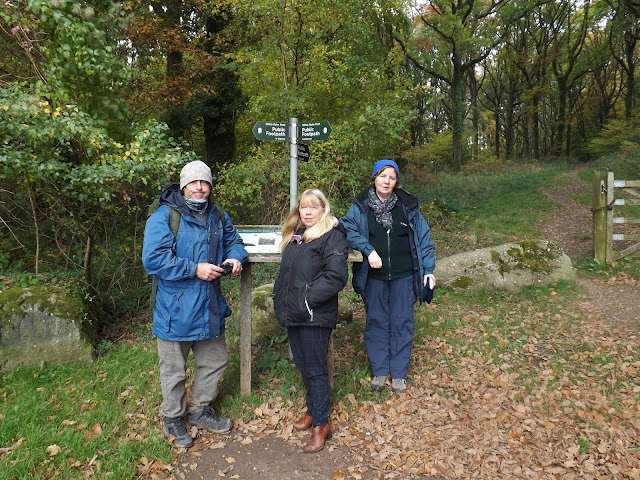 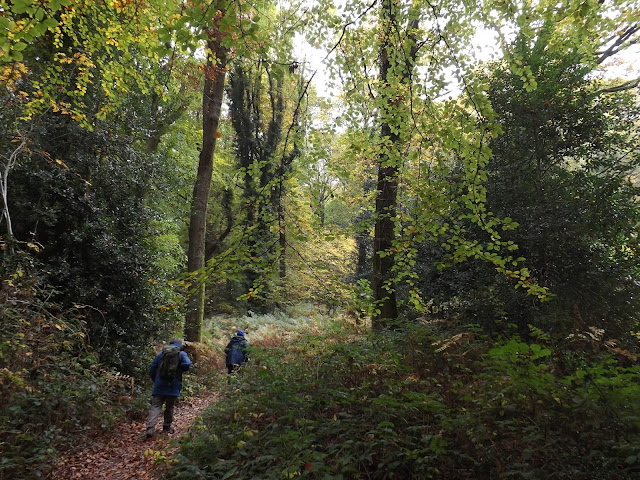 With the sun shining through the trees made for a lovely day walking. After a couple of km we were walking up by the side of the wood. Where Anne and David, who were just ahead of me, scared a group of deer. It was magnificent watching them run fleet of foot across the countryside, the deer that is not Anne and David. On the ground we could see great gouge marks where we guessed this was from the stags rutting. 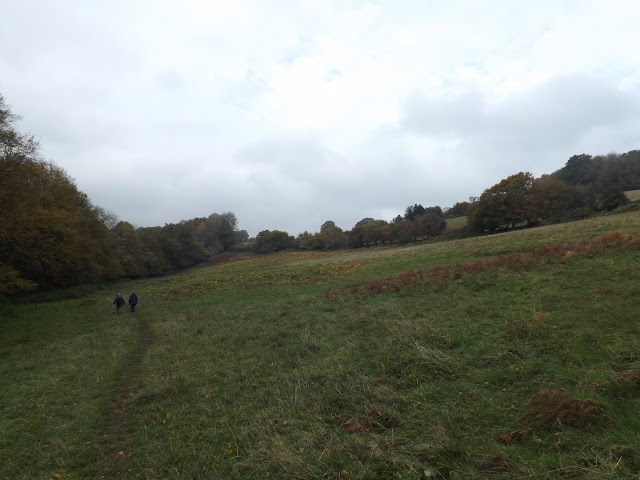 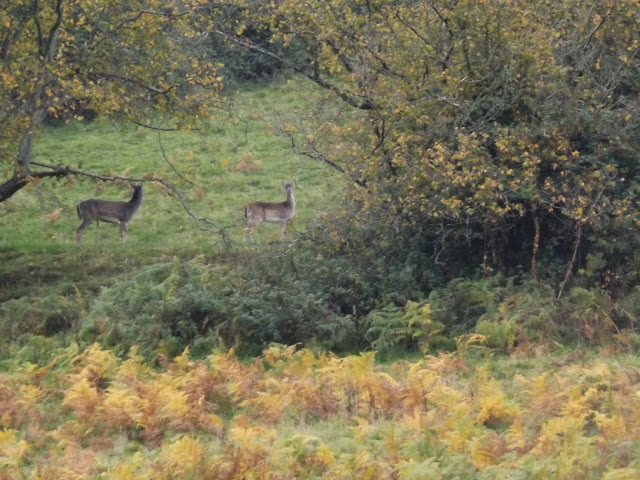 The ground started to head downhill as we moved towards Lower Redbrook. Which as the ground became steeper also became more slippery with mud so care had to be taken. Looking below we could see an old railway bridge that the guide shows is now used for another walking route. 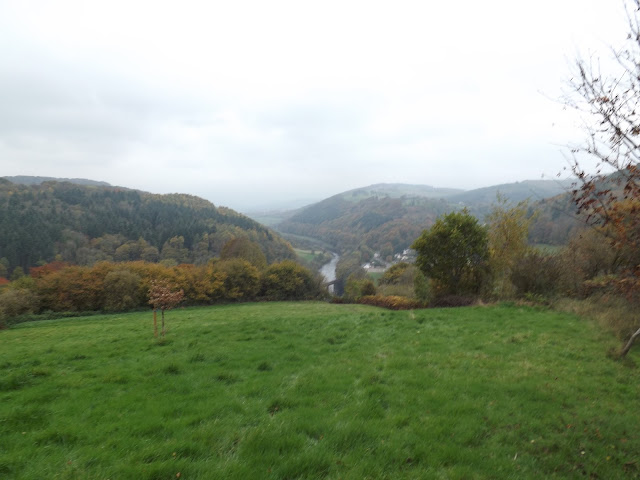 At the bottom of the hill we met up with Susan and had a short stop at the Bell Inn for a coffee. Leaving the Bell Inn we walked along the road the short distance back to the Offa's Dyke Path. There was a little confusion over some of the way signs and we started up the wrong path, not to worry it was worth it as we saw a young deer eating apples from a tree, unfortunately it was too quick for me and ran away before I could take its picture with pieces of apple falling out of its mouth. 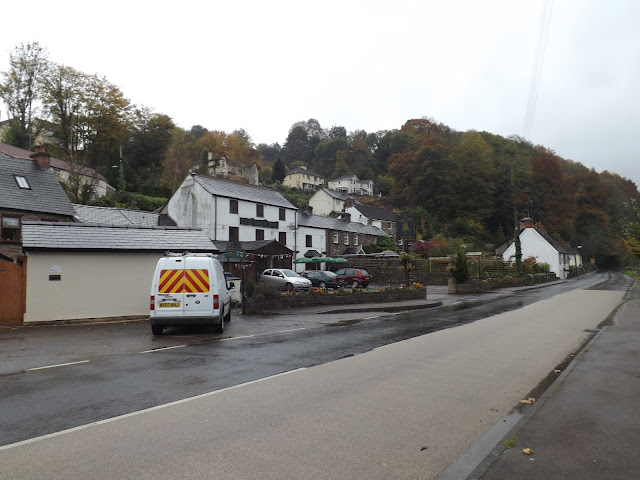 We returned to the road by the side of the church and headed up the correct path. The path climbs at first and turns left where it joins a road, turning right on the road we started a steady climb and we passed a number of large houses, one even had its own boating lake. The guide says join the signed path on the left, watch out as the path is not marked Offa's Dyke Path but is marked Wyesham and Kymin. The path was steep and leaves made the stones wet and slippery. 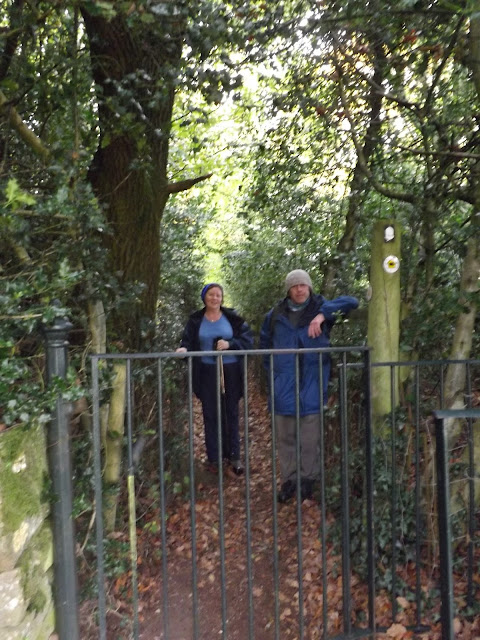 After a few hundred meters we joined a country lane that turned to a footpath behind a farm building. Across a few fields we arrived near a car park for the Naval Temple which was a monument to naval admirals by now it was raining. The Naval Temple was very interesting. 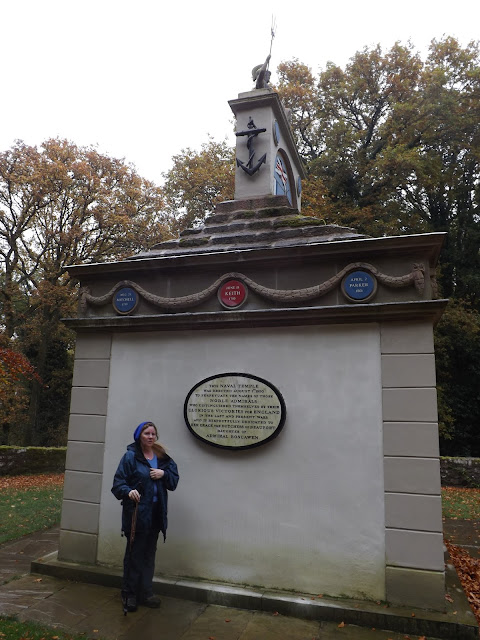 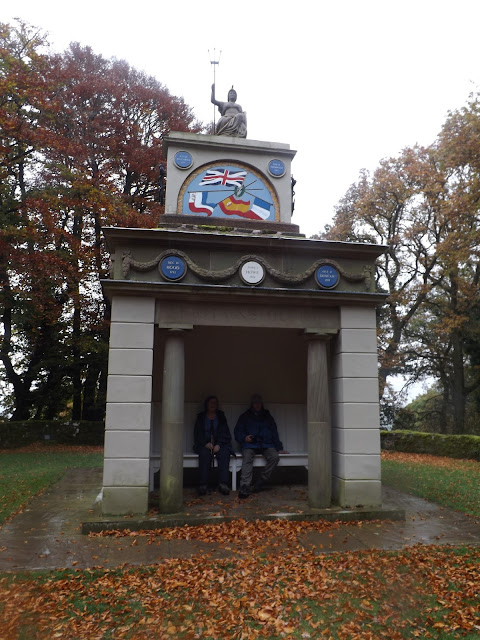 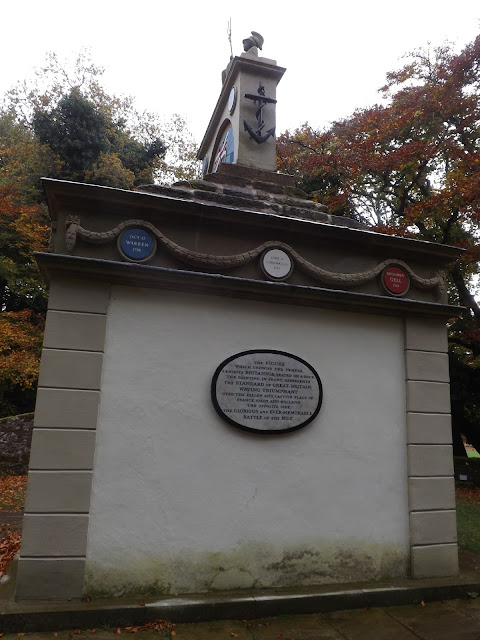 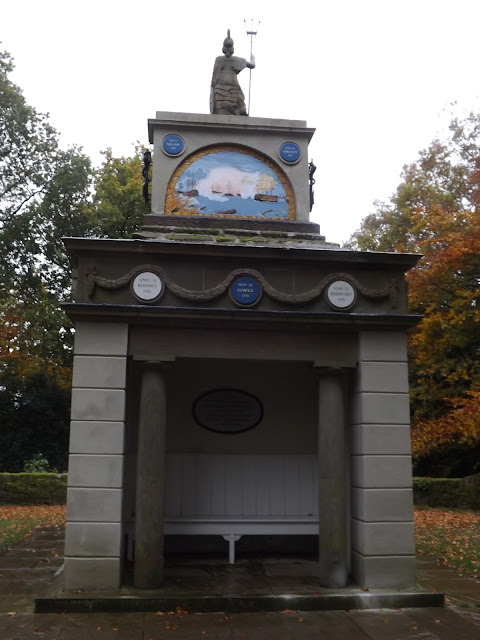 After a small rise and less than a hundred meters we reached the Kymin shown as an old banqueting house. Which has fantastic views over the area, even with the rain. You could see in the windows it was ready for Halloween. 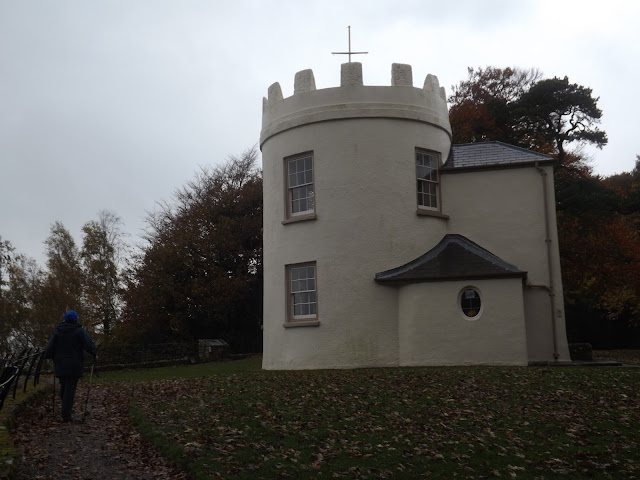 A little further along the top was a junction, we took the left hand path down hill through the woods. Following the signs across fields and by a very smart looking horse show jumping area, other fields a small wood and eventually we reached a road that we followed into Monmouth.

The road took us across the bridge, under a bypass passed a big school which has links to the City of London's Haberdashers, into the town. 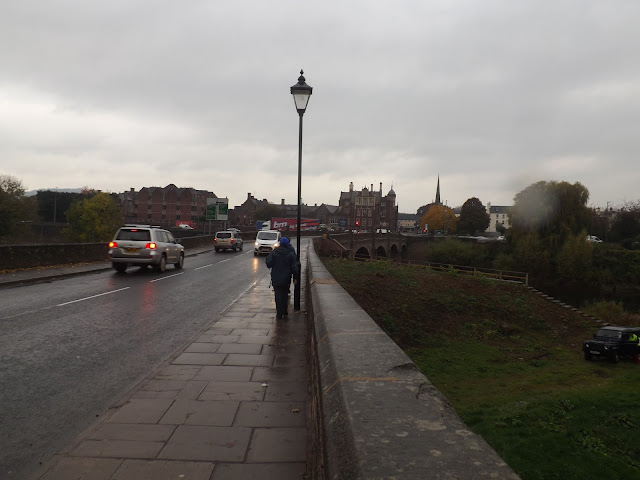 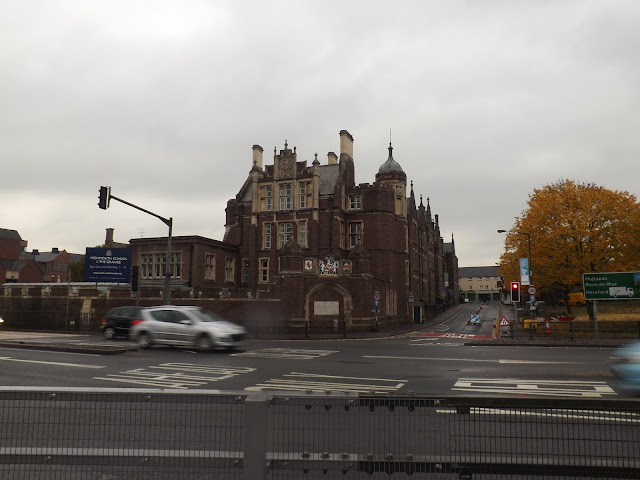 Into the town we turned left at St Mary's church into a narrow cobbled street. The rain had eased a little. 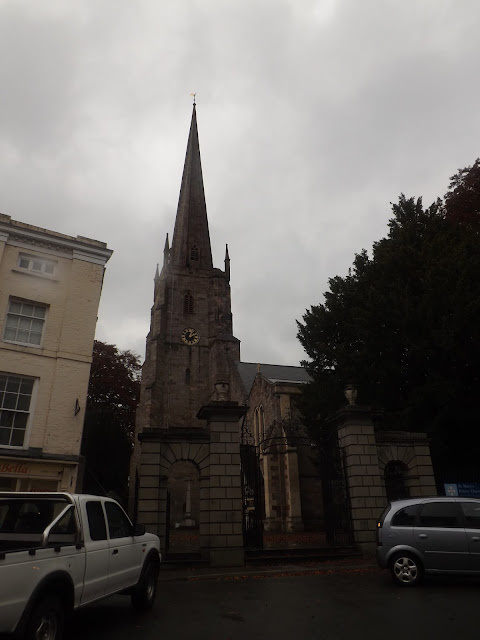 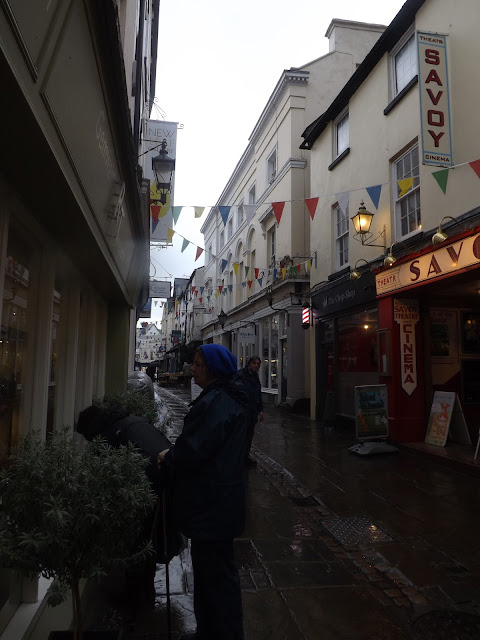 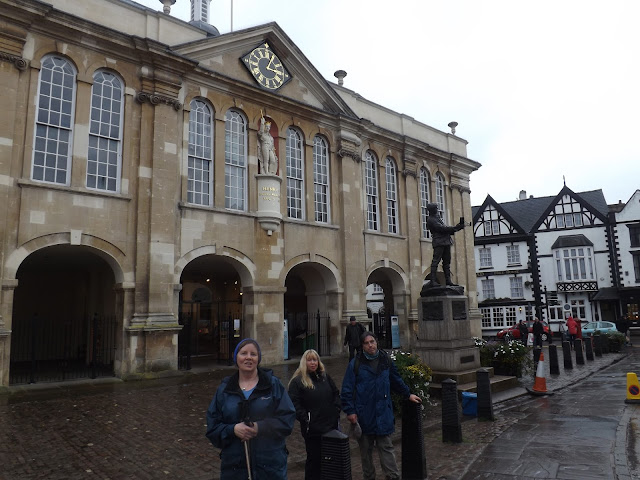 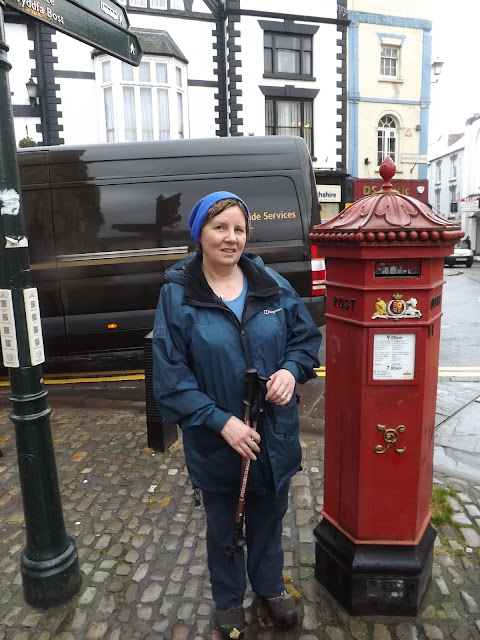 We walked down Monnow Street to the fortified gatehouse on Monnow Bridge. 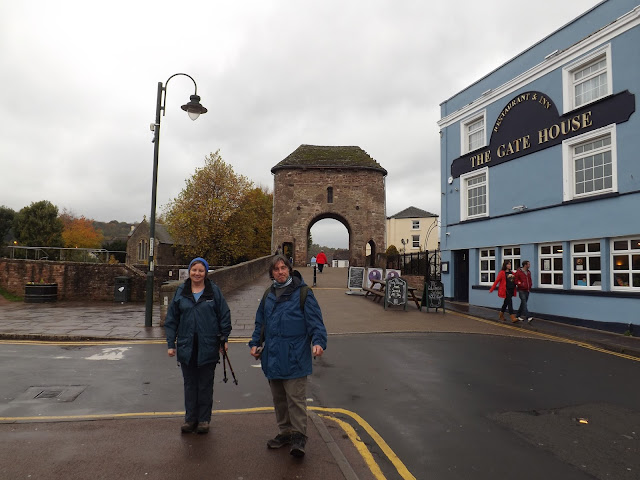 Across the bridge we turned right at the roundabout. 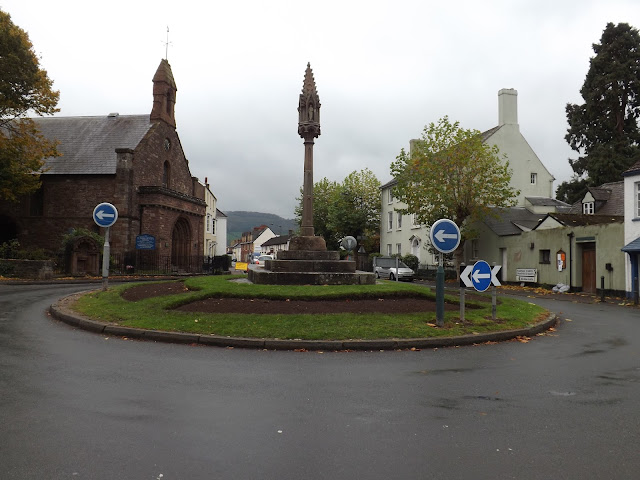 After a few hundred meters we turned up a road east following the signs which took us onto a road that turned north west passed a few new builds. A sign took us along a muddy track across a number of fields west. 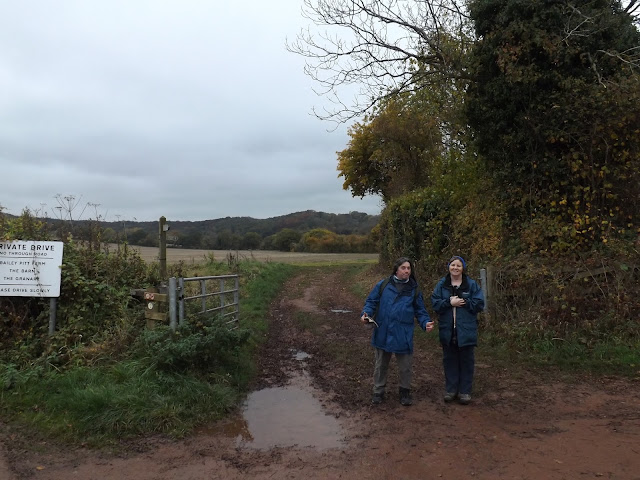 Following the track we climbed a path into King's Wood, we were making good time until we came across a sign showing the path ahead was closed and a diversion was in place. The diversion took us on a forest track around the wood, up and down we went, this track was at least three times if not four times longer than the route we had intended to take. 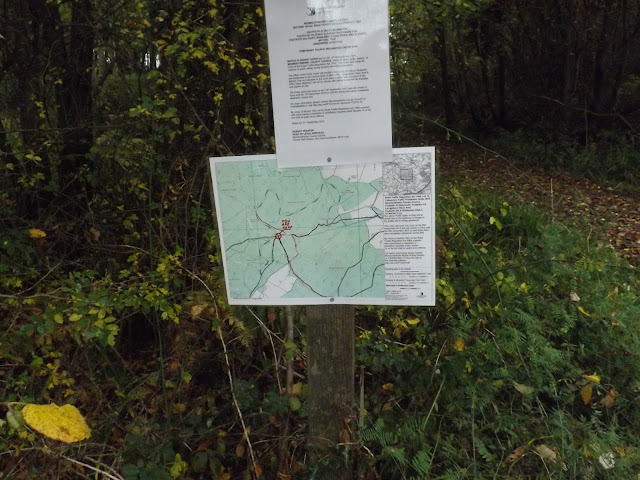 Anyway we were still making good time, once back on the correct Offa's Dyke Path, we headed down hill, and came out of the wood the track took us by the wood. It was starting to rain as we joined the track which moved across an open field. At the road we turned right and walked a few hundred meters to the corner of Lower Hendre.

It was starting to rain heavier and was dark when Susan arrived. Susan did well to find us on the narrow road we had came out on. In our walk we had covered 17 km with a 500m climb.

Boz North
Details correct at time of walking.
If you have enjoyed reading my walk or found it useful you may also like to read other walks I have done on The Offa's Dyke Path or other areas. Please check out the links on the right hand side.
Follow link to next day, Day 3 Lower Hendre to Pandy.
Follow link to previous day, Day 1 Sedbury Cliffs to Bigsweir Wood.