Although we had covered a few miles walking north towards Baskerville Hall Hotel campsite, the time it was taking to travel to our start point each day was not reducing. From our drop off we walked down the road to Hendre Farm. 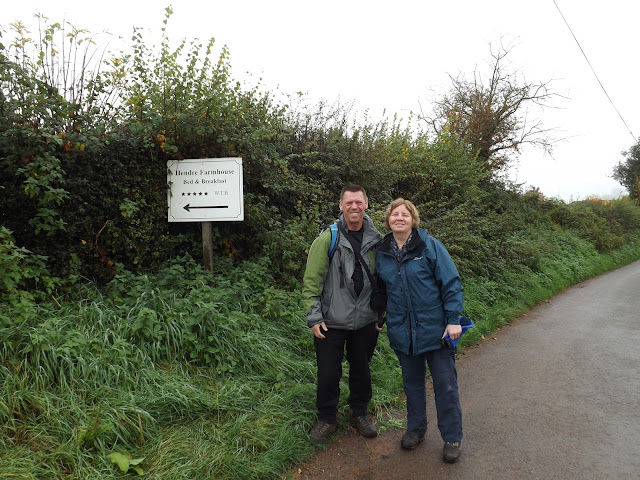 The footpath took us across the fields in a north westerly direction. Looking to our left over a high hedge was a field of white cattle. 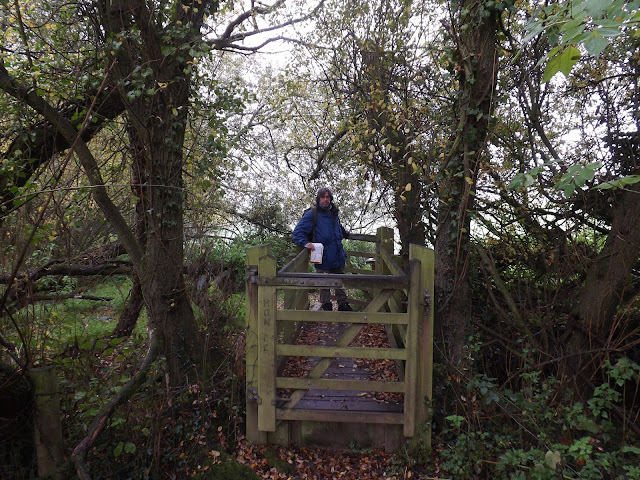 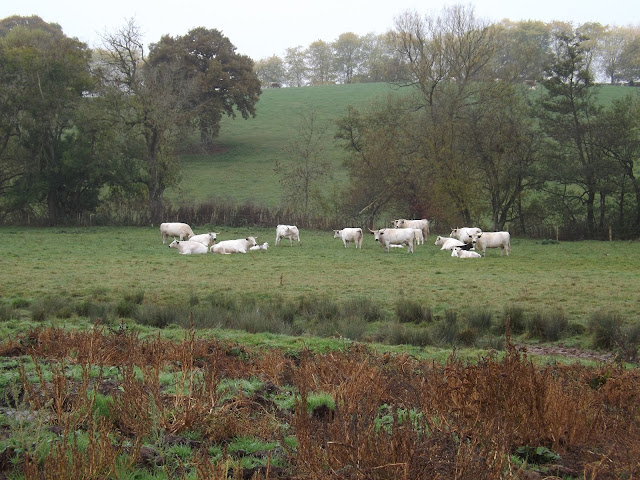 At the road we turned left, crossing the River Trothy, today we would be crossing or walking by the Trothy for what seemed like most of the day. After a few hundred meters we turned left back into a field, to again walk north west. When we reached the banks of the Trothy we turned west and followed it to Llanfihangel Ystum Llywern and St Michael's church. 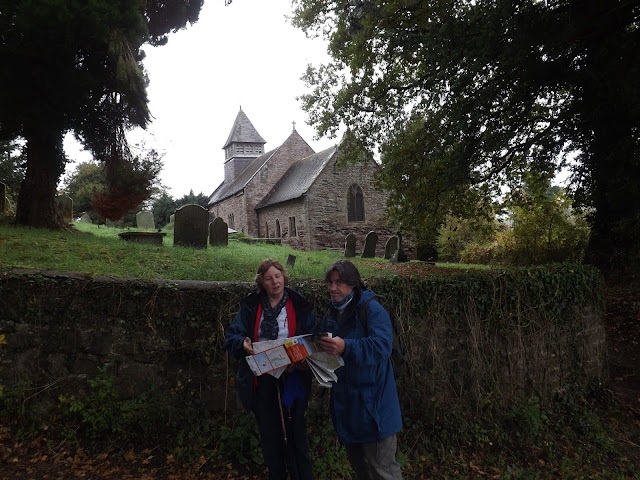 The path took us behind the church and continued west across a field. In the field was a bridge across a small stream, strange it had locks on both sides, but I could not see why? as the cows could cross either side without the bridge. 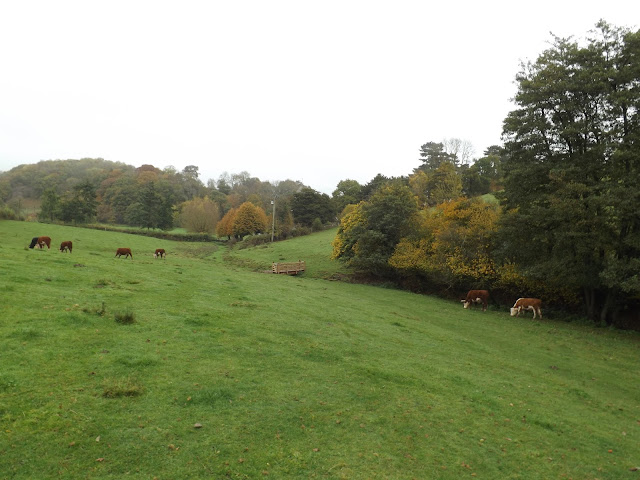 The weather was getting warmer as we climbed a steep rise and Anne and I had to take off our coats. At the top of the hill we joined a road that headed down hill. After another few hundred meters we turned right into a field which had a notice to walk the edge, which took us up to The Grange. Crossing the road we entered another field with a small rise. The path then dropped down to an orchard. 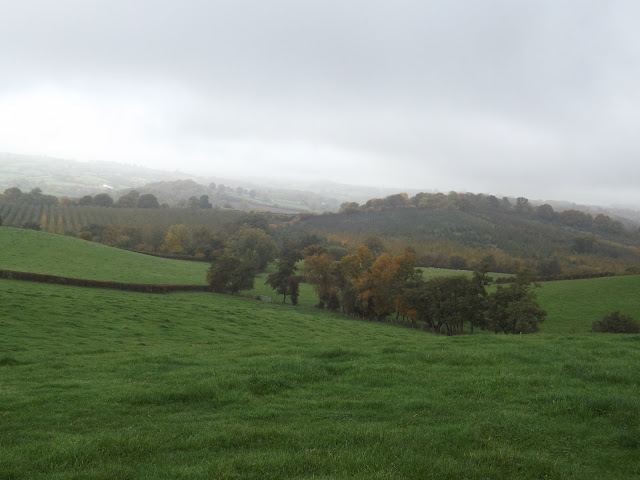 Once we crossed the orchard we reached another road and turned right. The orchard was for Bulmers Cider. The road took us into Llantilio Crossenny, the map in my guide showed there is a PH in the village so we agreed to have a short rest. 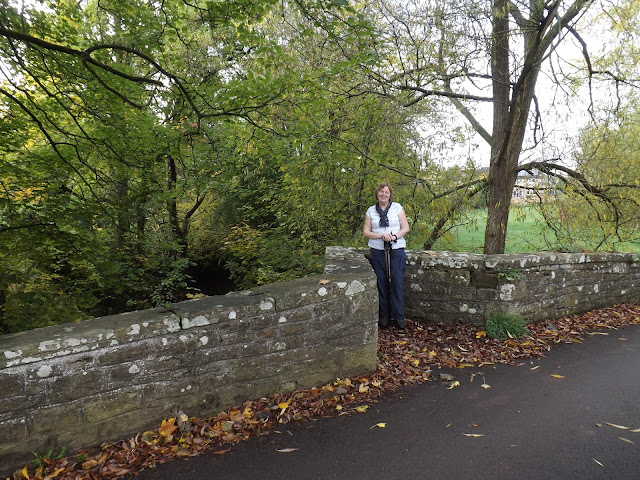 As we crossed the bridge, signs took us by the River Trothy up into the village. We could turn right to the church or left to the pub, so we turned left. What a disappointment the pub is no more. So we moved on. 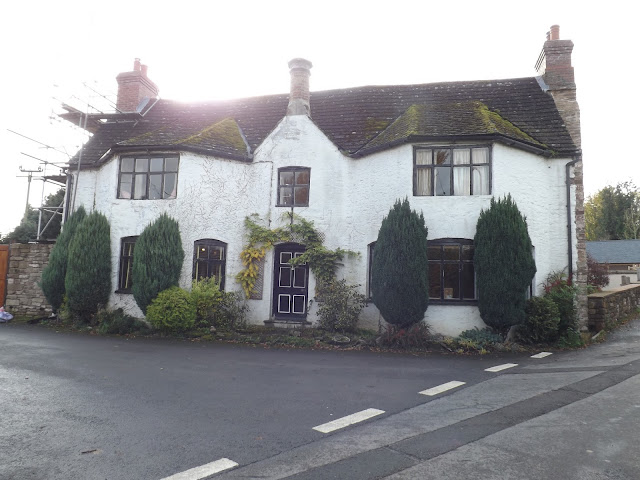 We crossed another short field and came to a main road. The footpath took us now over a couple of ploughed fields with crops in. 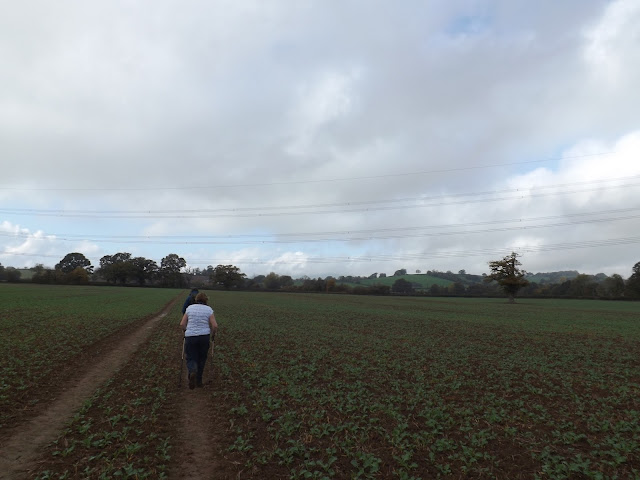 This took us into another ploughed field which previously had potatoes in it, which was steep and hard going. Fortunately the ground was quite dry so we did not end up having thick mud clinging to our boots. Making us about 6 inches taller. 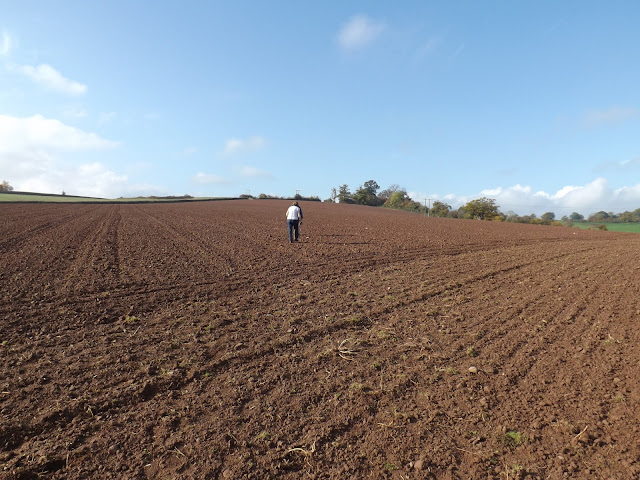 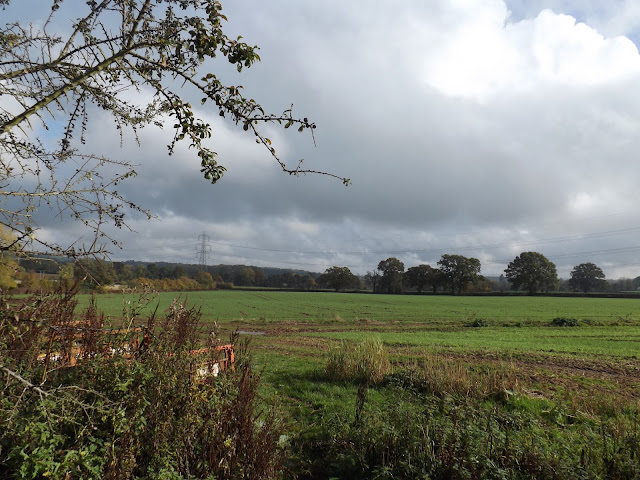 Once across the ploughed fields there was a short drop down the side of a hedge, across to the west we could see the Skirrid, we would see this to the west for most of the day, soon we were at Treadam. 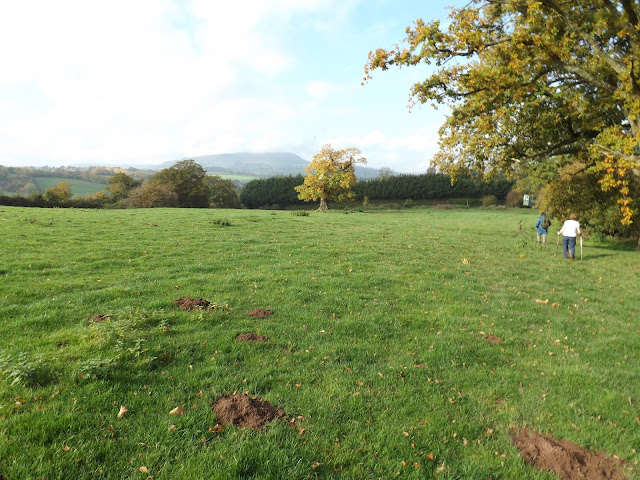 David's map showed that we may get something to drink here. Once we followed the track down to the road we followed the path back up the bank to The Hogs Head. Unfortunately it was closed but Dale the owner soon opened it for us and served us drinks. So we had a short rest and a drink.

Dale had been a milk farmer and due to circumstances he changed direction and set up this watering hole. He had space for weddings and other events and Dale showed us some of the photos. Brilliant, well done Dale. 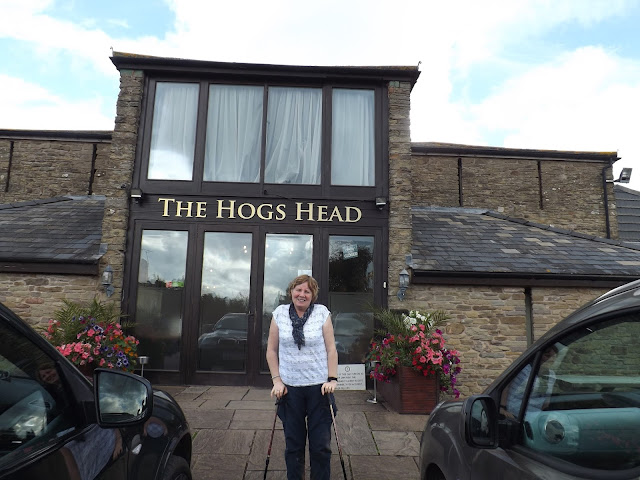 After our rest we said goodbye to Dale and set off back on the Path north. It did not take us long to reach the White Castle. A sign shows Rudolf Hess was allowed to wander around in this area sightseeing and painting the castle. 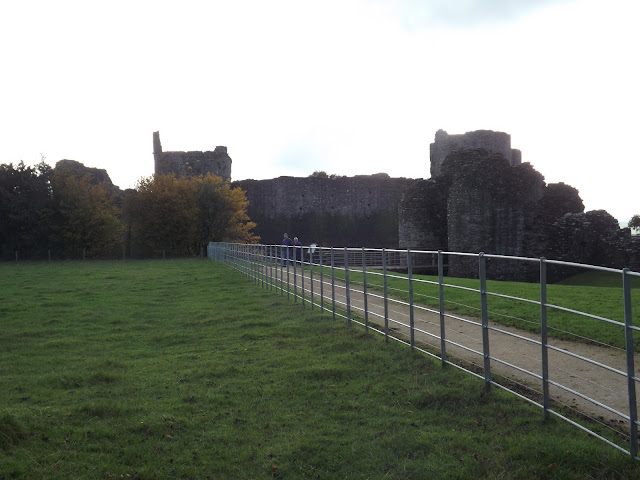 Walking around the White Castle we headed down hill. 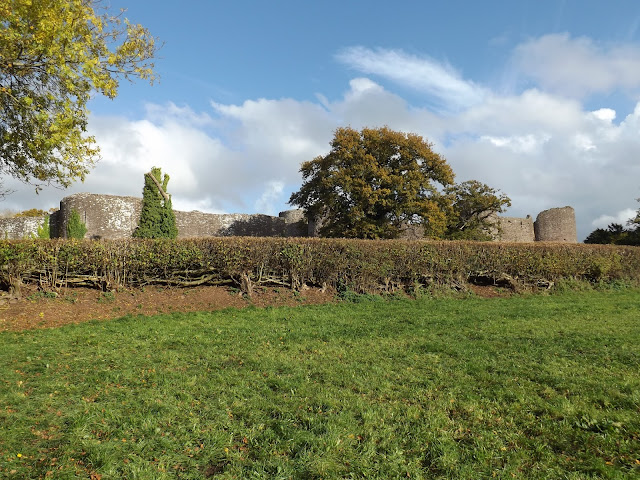 Looking west we could again see the Skirrid as we headed downhill. 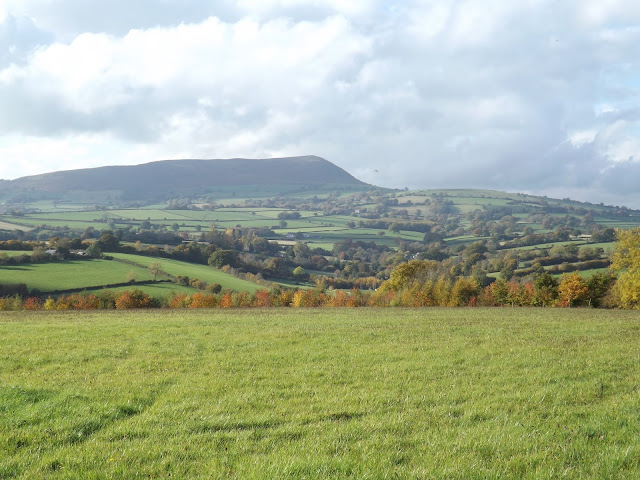 As we approached the road we passed this beautiful coloured tree with its fallen leaves forming a perfect circle of gold, stunning. 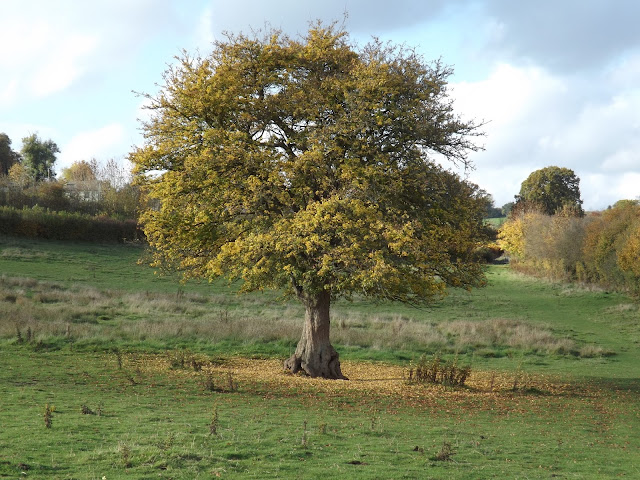 On the road we turned right towards Caggle Street and passed a chapel where we could see a lot of work was being done. Our path was just to the right of the chapel. 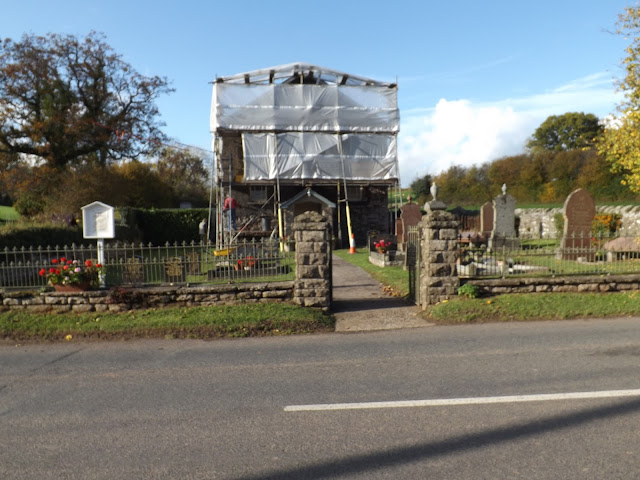 Once again we were climbing uphill in a north west direction. Following the fence lines we reached another road. Heading north the route took us up the road. After about one km we turned right off the road across a small bridge and we were again climbing a track across a field to Llangattock Lingoed. On our way we passed a couple who said we could get a cup of tea in the church but when we arrived the church was closed. So we turned right walked passed the church and went to the pub, The Hunters Moon Inn, for a drink. 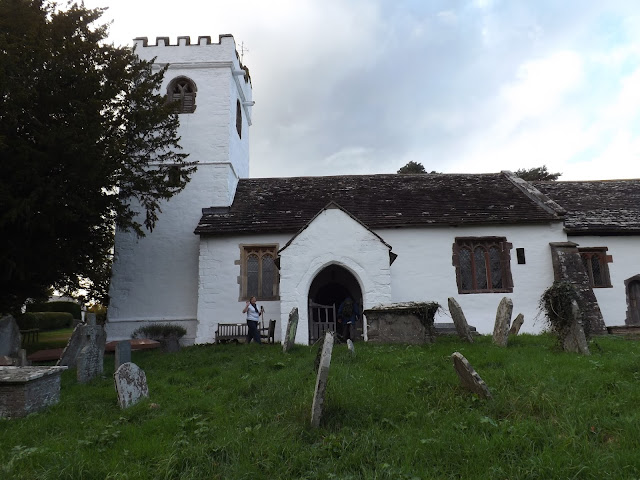 Back on the road we walked about a hundred meters west before turning right along a narrow track that brought us to an open field. Crossing a stream then another climb, it now felt time to put back on our coats. 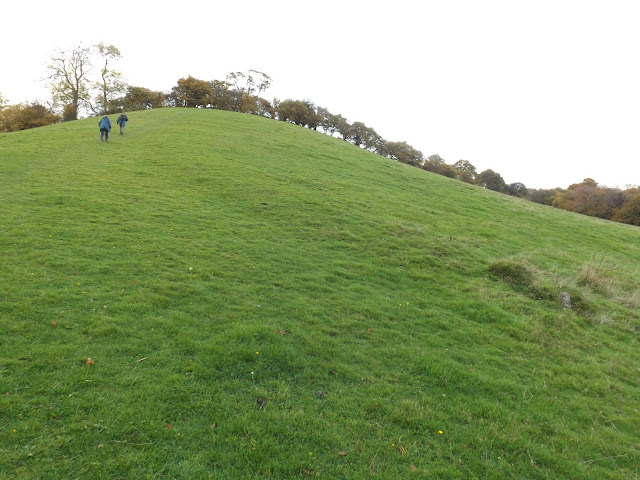 The light was turning as we crossed field after field, then it started to rain, it almost started the same time as it had yesterday. 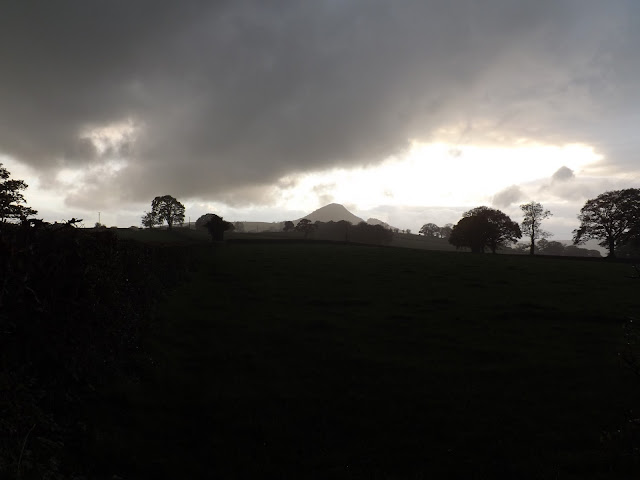 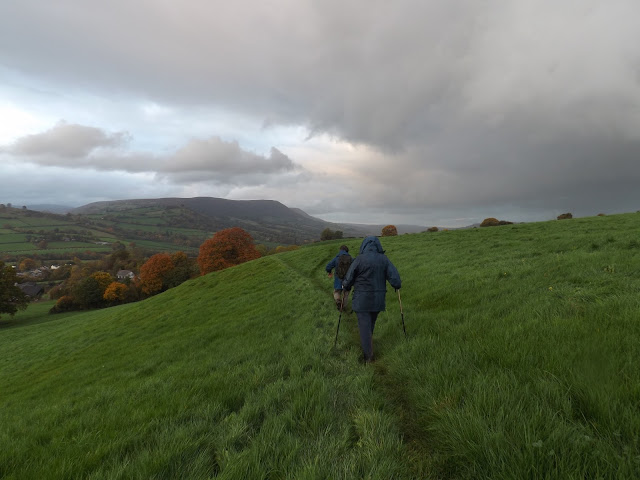 Almost as suddenly as it started raining it stopped and the skies cleared. It did not take us long to walk the last couple of fields and walk to the main road. 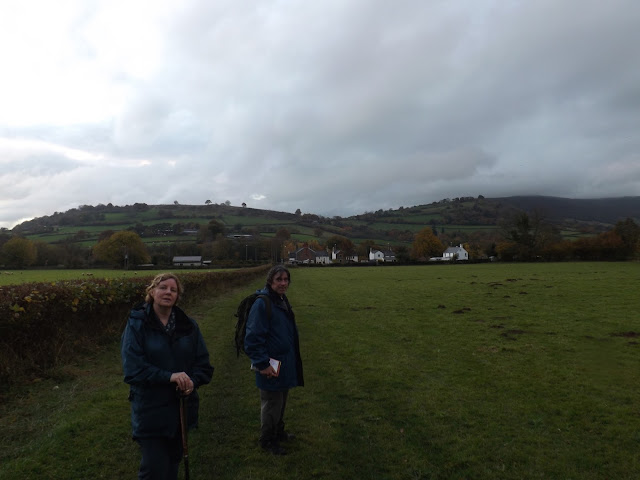 Susan was waiting in the lay by for us. We decided to eat our evening meal at the Baskerville Hall Hotel as tonight was the weekly acoustic night. What a night it was brilliant entertainment.