Following our visit late last year to Hay-on-Wye as part of our Offa's Dyke Path we had enjoyed our stay at the Baskerville Hall Hotel campsite. So we decided to come back and have a few days in the campsite this week. Although I had planned a number of walks in the area, this was the second of the two walks we managed to do due to the Hay Festival.

I had seen this walk in an old copy of a Trail magazine so it was good to get the opportunity to give it a go. After driving to Abergavenny I found the car park at grid SO 283 162 although not shown on the map there is a small car park there. 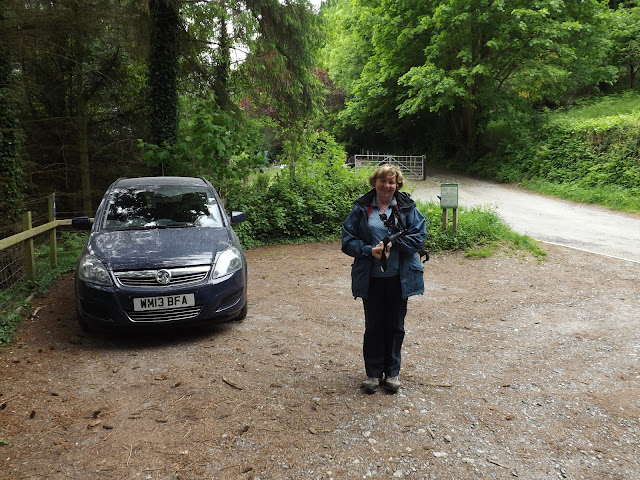 From the car park (190m) we turned left and walked down the gravel track that looks like a private road down hill. The low cloud threatening rain all day. 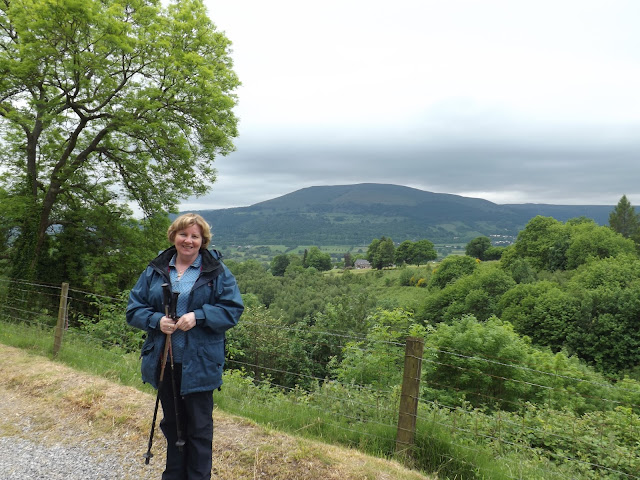 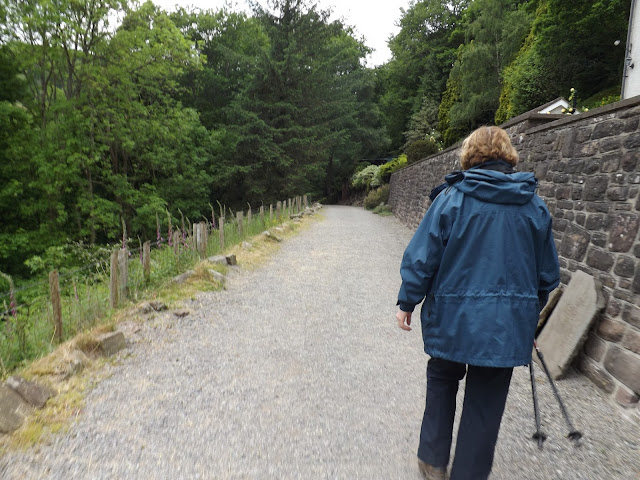 We followed the path down hill and through a gate the path continued down hill. 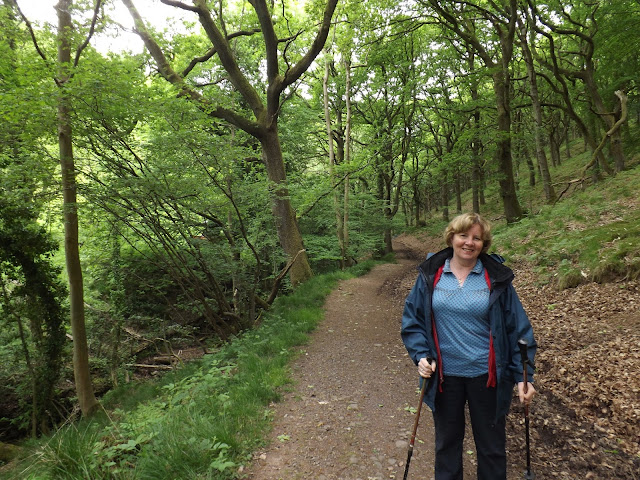 At the bottom the path narrowed and crossed the stream over a narrow stone bridge (180m). It was muddy, although slippery in places as the path climbed it was lovely walking along the bottom of the wood, skirting the small stream, shown on the map as St Mary's Vale. 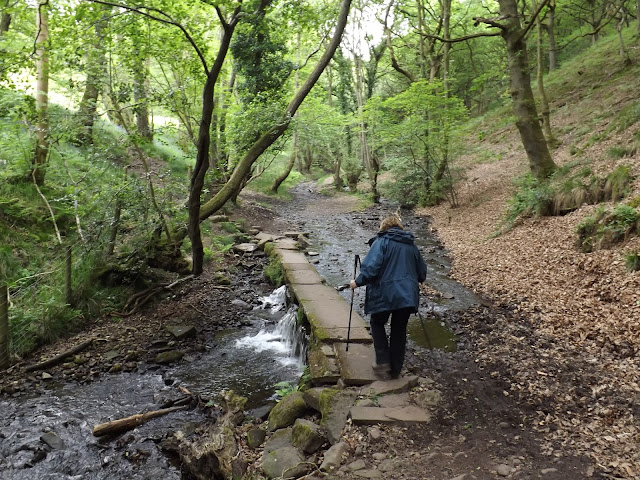 Early in our walk up the Vale, we passed a large group of people, it looked like an event ran by the National Trust. Moving away from the group we found a little girl stuck in the mud, we helped her out as we walked passed.

In places a few trees had fallen across our path so we had to walk round them. The path continued to climb up the valley. It was very peaceful with the sounds of birds singing and an occasional cuckoo. 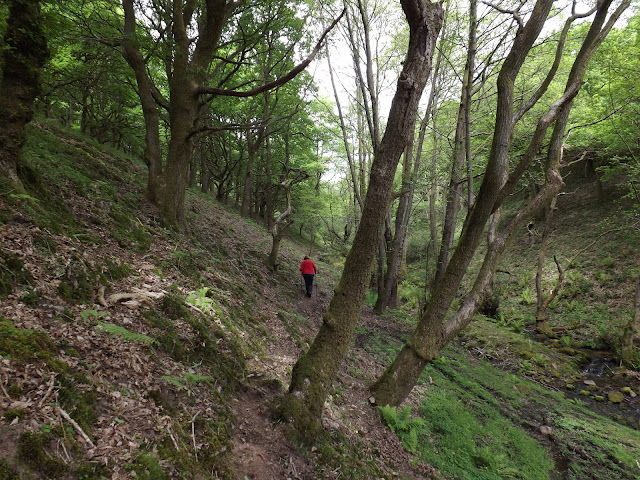 Our path cleared the wood to our right as it climbed by the stream. 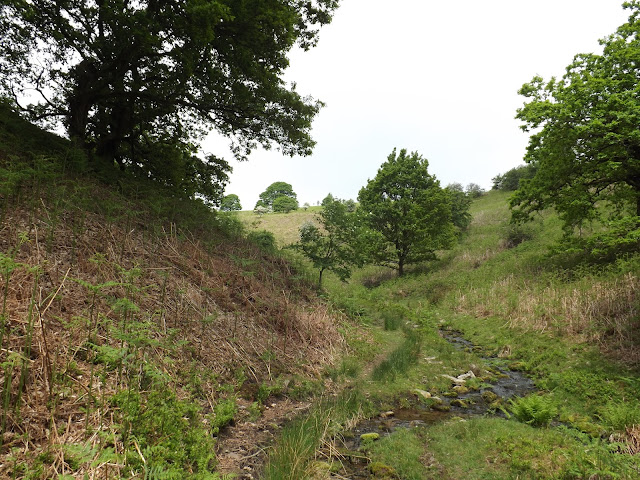 The country side soon opened up as we left the wood on our left behind. We continued to climb the valley as it turned to our right, heading north. 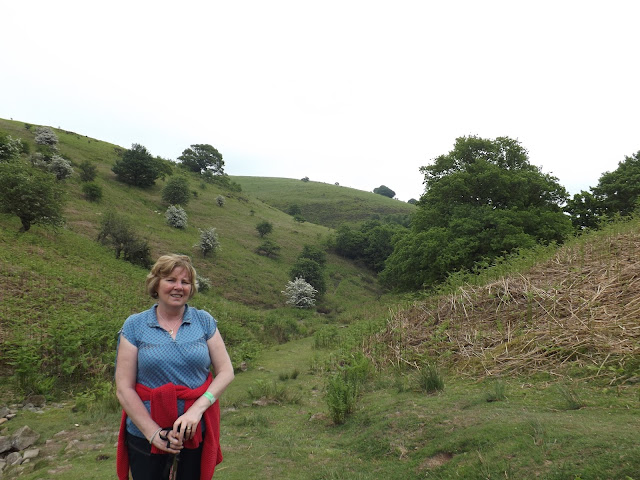 As we climbed and followed the valley round north we got our first sight of Sugar Loaf. 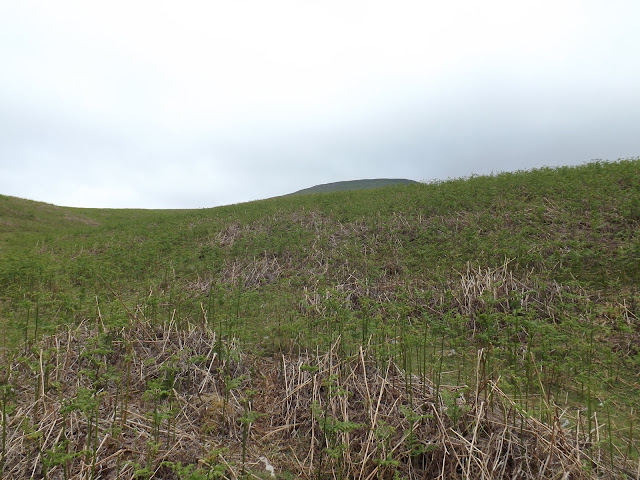 We continued up the grass path towards Sugar Loaf as it climbed. We could see loads of people walking in the area 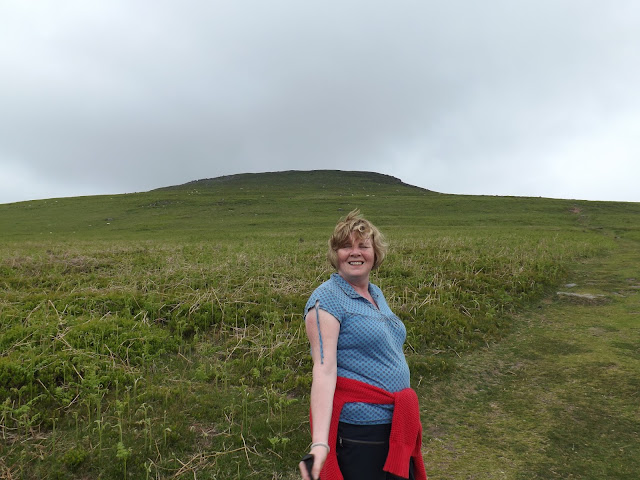 The path soon turned steep as we climbed and turned left and walked up the side of Sugar Loaf. At the top we walked the small ridge to our left to the trig point (596m). 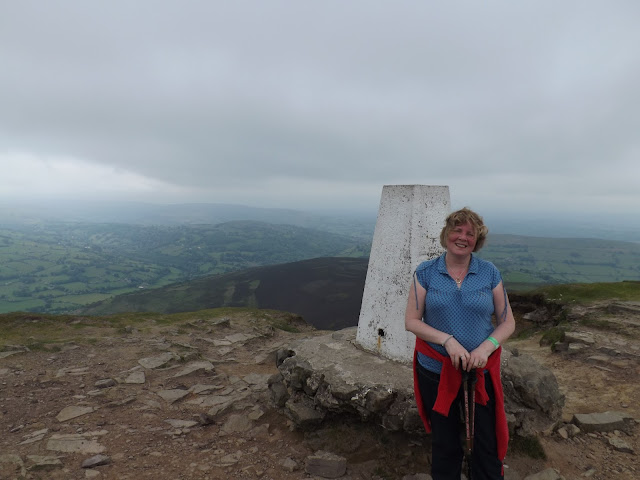 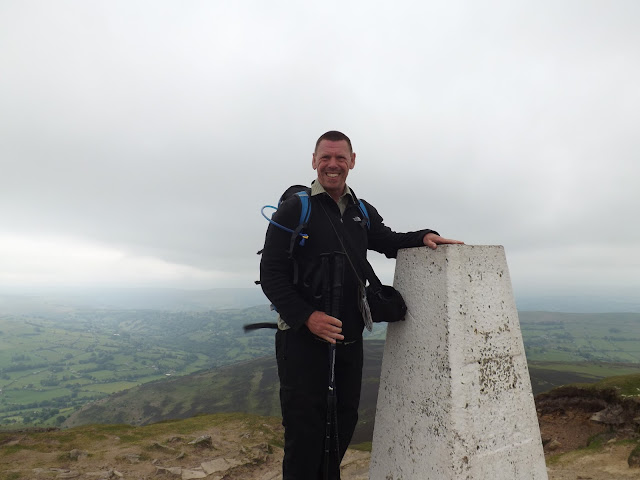 The views were good although there was low cloud covering the hills all around us, but what we could see was beautiful. 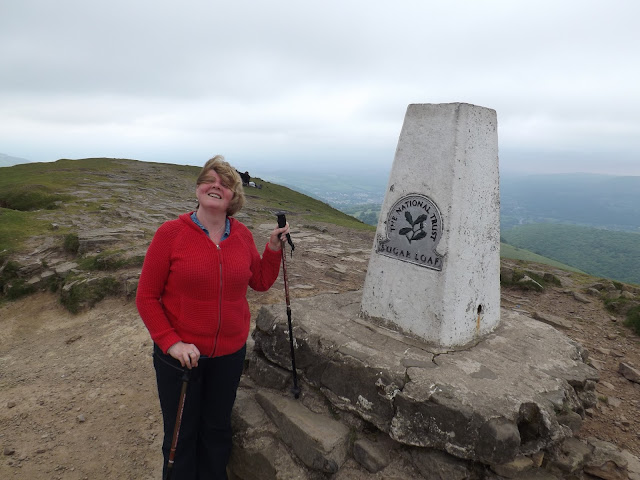 There was a lot of carvings on stones and a flag with Emily's name on it. 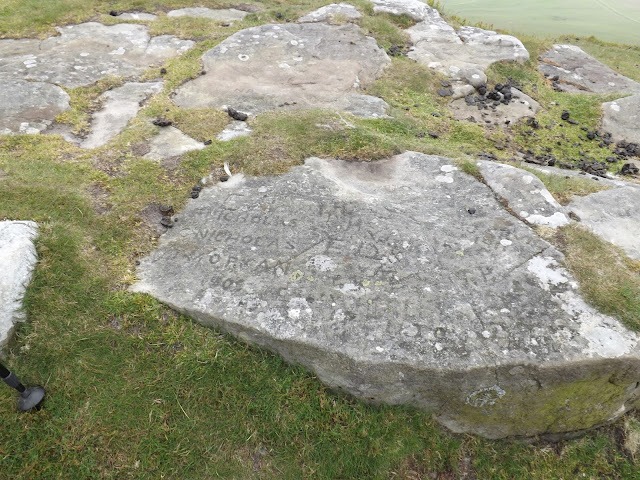 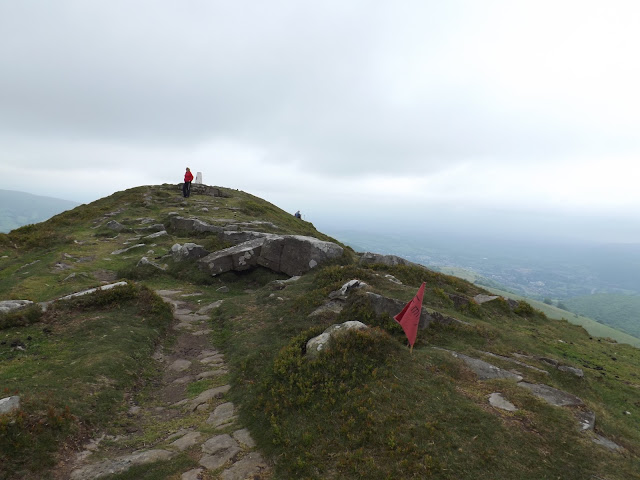 We walked to the east side and climbed down a steep path to find a little shelter from the wind. Where we stopped at a rock with poetry carved on it signed by HJ? I cannot find anything on the internet about this. This was where we had a little lunch and enjoyed the views across to Abergavenny. 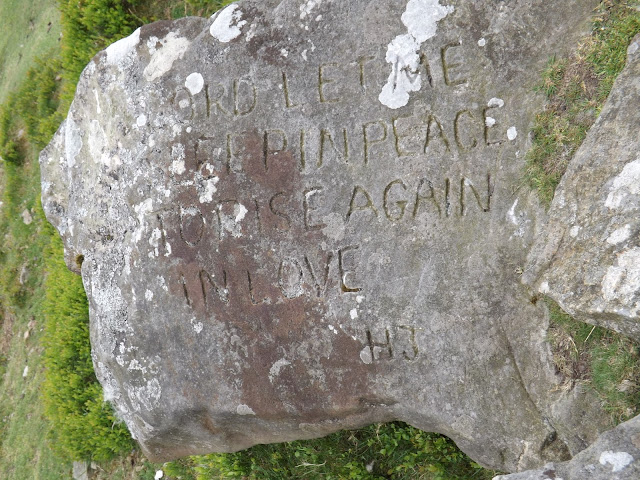 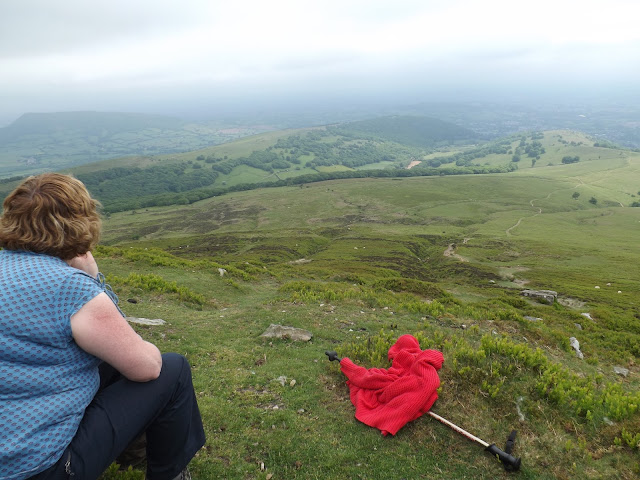 After our break we continued along a grass path heading south east, down hill. It was a little steep in places with a couple of little dips but soon leveled out. 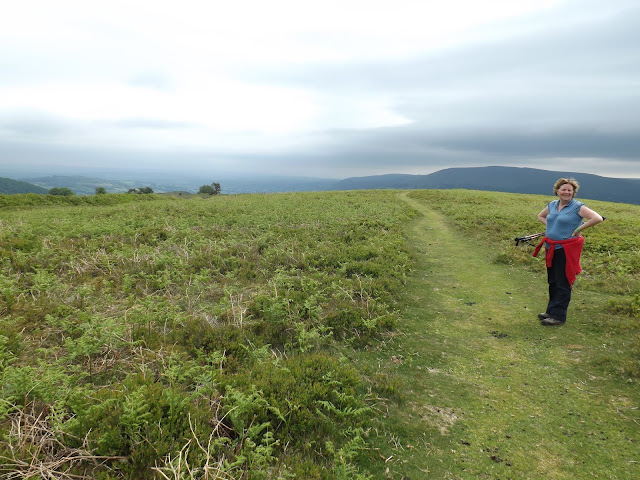 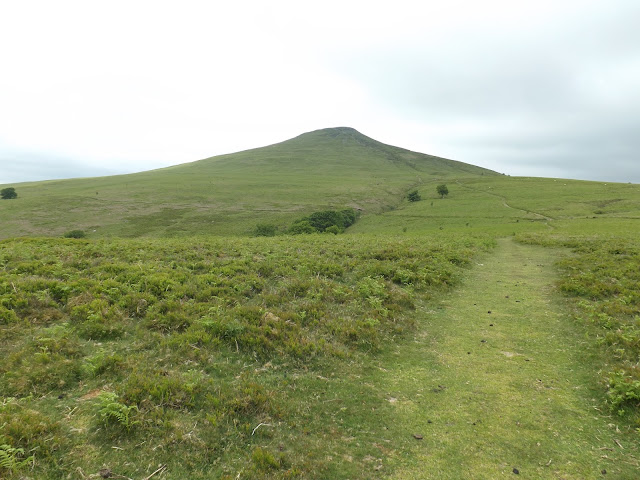 After a little drop and small climb the path continues down hill back to the top of the side of the wood north east side of St Mary's Vale. 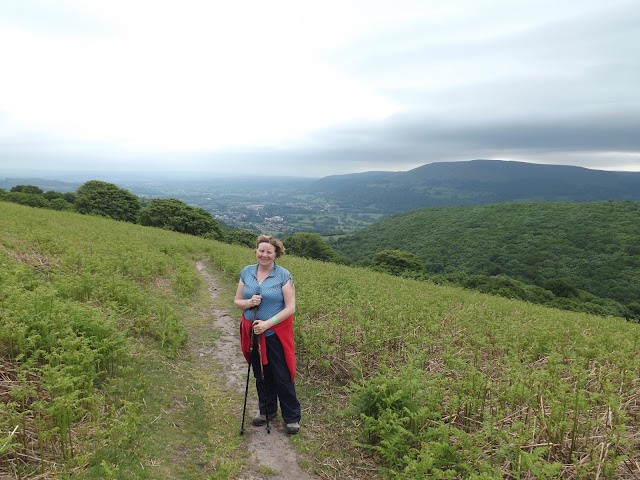 We scared a number of crows sitting in the trees and a squirrel ran across the path falling more than running down hill. 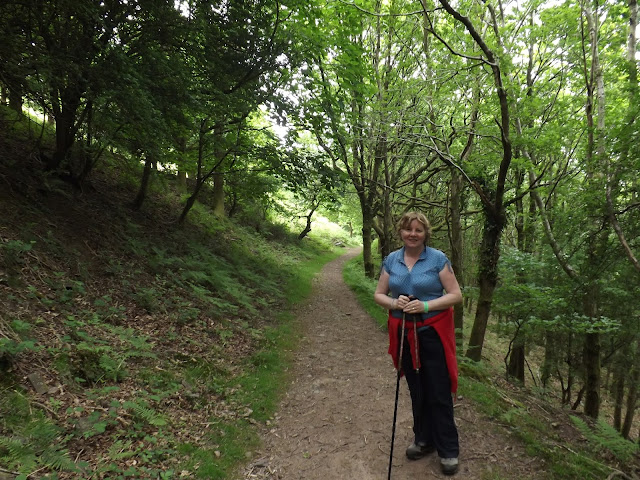 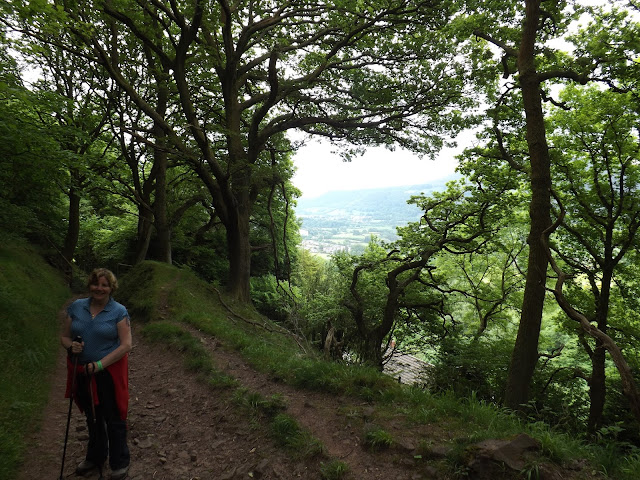 The track continued down hill, through a gate and down to join the path we had taken down hill at the start of our walk earlier in the day. 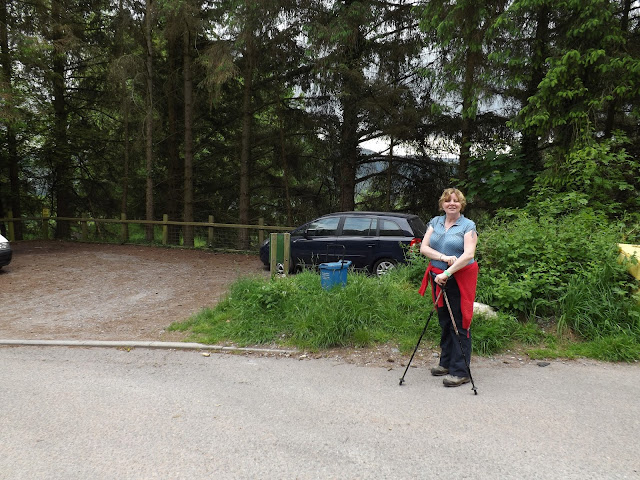 It had been a lovely walk. I disagree with the distance and height from the Trail magazine. I measured we had covered just over 6.5km with 420m climb, both less than shown in the magazine.

After a meal in Abergavenny we returned to the Baskerville Hall Hotel where we enjoyed listening to the talents of the people who took part in the weekly acoustic night, over a few drinks.

More to follow
Boz North
Details correct at time of walking.
If you have enjoyed reading my walk or found it useful you may also like to read other walks I have done in Wales or other areas. Please check out the links on the right hand side.